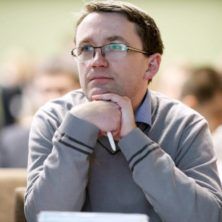 Head of Research at Concorde Capital, Research Division.
He joined the firm in November, 2011, and covers the agriculture, consumer, utilities, economics and fixed income sectors at the firm. Prior to this, he was a Senior Analyst at BG Capital (Ukraine), Research Division and covered utilities and telecom sectors. In 2007 he was named the Best Pan-European Investment Analyst covering European Emerging Markets by Thomson Extel Surveys, beating out stiff competition from peers at ING, JPMorgan, UBS, Deutsche Bank, and others. In 2008 Mr. Paraschiy was recognized Ukraine’s Best Utilities Analyst by Thomson Reuters Extel’s Focus CIS Survey.
He received his Master of Arts degree in Economic Theory and Strategy at the Kyiv School of Economics, EERC program and Bachelor of Arts degree in Economics from the Kyiv Mohyla Academy.