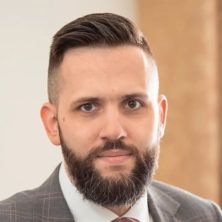 He graduated from the Taras Shevchenko National University of Kyiv and has a master’s degree in “Economic Theory”. In 2003-2006, he worked as an analyst in mergers and acquisitions in the Golden Gate Business.

In 2006-2010 he worked in the investment company Dragon Capital, where he served as Vice President and then Director of Investment Banking. In 2010 he became Managing Director of the Ukrainian office of the  Icon Private Equity fund, and since 2011 has been managing partner of the Fund. In 2015 he was appointed Deputy Minister of Economic Development and Trade of Ukraine.