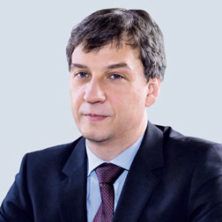 In 1993 he graduated from the Kiev Polytechnic Institute, in 1994 – the Higher School of Banking of the International Center of Market Relations and Business Center “Market” on a specialty “Finance and credit” and was qualified as an economist, manager of banking. In 2006 received a certificate of financial analyst (CFA).In the banking system since 1993, since 1999 – executive positions: Head of Treasury Bank “Bank Austria Creditanstalt Ukraine”; Deputy Head of Investment Banking Department, Head of Investment Banking services UkrSibbank; Head of operations in the market fixed income investment department of VTB Bank.
On April 27 in 2015 he was entrusted with the duties of the deputy head of the NBU. And after the approval of the NBU Council, Oleg Chury became the deputy head of the NBU.