Five Compelling Reasons For The U.S. To Offer Lethal Military Assistance to Ukraine

With Washington’s attention diverted, as radical ISIS forces march towards Baghdad, it is no coincidence that Russia chose to send tanks, missiles, and armored personnel carriers across its border into east Ukraine. Forget Putin’s assurances that he had nothing to do with this. Movements of heavy weaponry in border areas require authorization from the highest levels in Putin’s notorious power vertical.

The June 12 passage of Russian tanks, missiles, and armored personnel carriers across the border (confirmed by U.S. sources) was so blatant that even the timid NATO 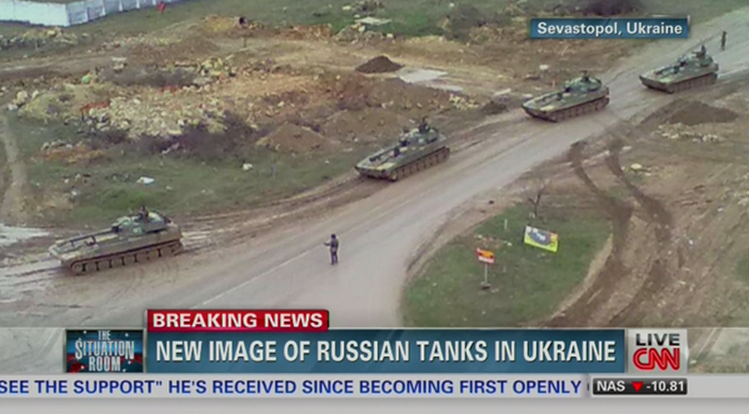 U.S. presidents must be able to deal with more than one emergency at a time. Whereas the Middle East has become a boiling cauldron that defies solution, Russia’s subversion of Ukraine can be dealt with effectively at low cost: The United States and Europe can simply give Ukraine the military means to defend itself and its territorial integrity. No “boots on the ground” are required, just a few billion dollars worth of real weapons. Thereafter, Ukraine will do the heavy lifting itself. Russia must pay its mercenaries. Young Ukrainians are fighting and dying for a cause.

So far, President Obama has denied Ukraine meaningful military assistance for reasons I find difficult to fathom. After months of stalling, Barack Obama announced on June 4 in Warsaw a $5 million (not billion) package of non-lethal military aid to Ukraine to supplement his earlier grant of military box lunches. The five million will buy fewer than 600 top-of-the-line night goggles at today’s prices. Better nothing than such an insulting token amount.

In contrast, analysts from Forbes.ua have placed a $250 million price tag on the two-month Donbass separatist operation paid by its shadowy Russian “sponsors.” The fifteen thousand $300-per-day mercenaries streaming across the border with their lethal weaponry account for most of this cost.

Russia has outspent the United States of America fifty times over on military assistance in the Ukrainian theater and by an infinite amount in terms of lethal assistance (a positive number divided by zero equals infinity).

Whenever the topic of Ukrainian military assistance is broached, European and American opponents immediately revert to “boots on the ground.” Ukraine is requesting training, advice and military equipment, not a “third world war” as naysayers hysterically prophesy. USA Today summarized Obama’s response to Ukraine’s pleas with its headline: “U.S. reaffirms: No weapons will go to Ukraine.”

To President Obama and the U.S. Congress: There are compelling reasons why the United States and NATO should supply embattled Ukraine with military equipment. My reasons are:

First. Ukraine is fighting the United States’ and Europe’s battle against a wealthy petro state, whose rogue leader, Vladimir Putin, has broken international treaties and norms, and must be reined in before he expands his horizons. Ukraine has fought this battle so far on its own paltry resources with little assistance from a civilized world too timid to confront a bully state. As a Der Spiegel panel concluded, “Ukraine is fighting our battle,” and we “need to step up.”

In military engagements in Vietnam, Iraq, and Afghanistan, the United States has provided military assistance to local allies unwilling to defend themselves (as the current rout of the Iraqi army shows). Ukraine, with its increasing loss of life and spilled blood, is fighting on its own behalf, as the United States and Europe spur it on with vague promises of sanctions and expressions of concern delivered safely from the sidelines.

Second. The United States need not fear that military assistance to Ukraine will turn Putin or the Russian people against us. This has already happened. Throughout Putin’s tenure, the United States and NATO have been vilified as Russia’s enemy number one. (Remember that Mitt Romney was scorned for returning the favor). The “reset’s” failure has brought home that Russia will not assist us in the world’s trouble spots. In Syria and Iran, Russia has made things worse rather than better. A wise man knows when to bury a dead idea. Let’s hope that Obama has relegated “reset” to the dustbin of history.

Putin’s nonstop propaganda shrilly blames the United States and Europe for the Ukraine conflict. It claims that the U.S. State Department paid for the Euro-Maidan protests, backed the neo-Nazi extremists who took control of Kiev, and remarkably has its CIA and Blackwater agents in east Ukraine to protect shale oil deposits for energy conglomerates. Ukraine’s new president and his government are mindless puppets of Washington, the Russian media trumpets day and night.

There are no limits to the imagination of Putin’s “information technologists,” and they are effective. Authoritative Levada Institute pollsshow a dramatic worsening of Russian public opinion towards the United States and Europe. Russians believe the mantra, as routinely enunciated by Foreign Minister Sergei Lavrov: “You cannot avoid the impression that they (the Americans) are running the show very much, very much.”

Third. In the case of Ukraine, the Obama administration has a rare international consensus on its side. Russia is the aggressor; Ukraine is the aggrieved party. What more could Obama want?

Ukraine has the 100-11voteMay 15 report chronicles abuses by the pro-Russian forces in both Crimea and east Ukraine. The Organization for Security and Cooperation in Europe (OSCE) blasted the illegal actions (of armed separatists) as “an attempt to prevent the election, deny citizens the fundamental right to freely participate and elect their chosen representative,” in itsreporton the May 25 Ukrainian presidential election. (The OSCE cannot be pleased with the kidnapping of its credentialed observers by eastern renegades.) The G7 communiqué of June 4 also does not mince words: “We are united in condemning the Russian Federation’s continuing violation of the sovereignty and territorial integrity of Ukraine. Russia’s illegal annexation of Crimea, and actions to destabilize eastern Ukraine are unacceptable and must stop. These actions violate fundamental principles of international law and should be a concern for all nations.”

In granting military assistance to Ukraine, Obama can cite the support of the international community, which he, as a presidential candidate, promised as a condition for action in international disputes.

Fourth. Putin takes great pains to describe the battle for east Ukraine as a civil war between oppressed Russian speakers of the east and rabid anti-Russian extremists of the west. A civil war indeed would weaken the case for American arms to one side, but this is anything but a spontaneous civil war. It is a contrived diversionary campaign planned and executed by outside forces from Russia.

Although no one can cite earlier cases of Ukrainian on Russian ethnic violence (Ukrainians would scratch their heads in puzzlement over such a claim), the pro-Russian forces attempted to look “local” at least in the early phases of the campaign. While shady locals appointed themselves as mayors or governors of self-proclaimed non-existent “people’s republics,” Russian military officers controlled them from the shadows. (See my Intercepted Phone Calls and Putin’s Executioners.)

After reputable polls showed that even the east Ukrainians wanted to remain part of a unitary Ukrainian state and the Donbass independence referendums bombed, the veil was lifted. The Russian military commanders openly boasted of their credentials from wars in Chechnya, Georgia, and Transnistria. (They even post heroic “Russian men of steel” billboardsof themselves on Ukrainian city streets). The new civil head of the people’s republic arrived from Moscow, claiming no local ties. Mercenaries from Russia, Chechnya, and Ossetia openly admit in interviewswith the Financial Times that they had been told to come by their regional boss and do not hide that they are paid generously. 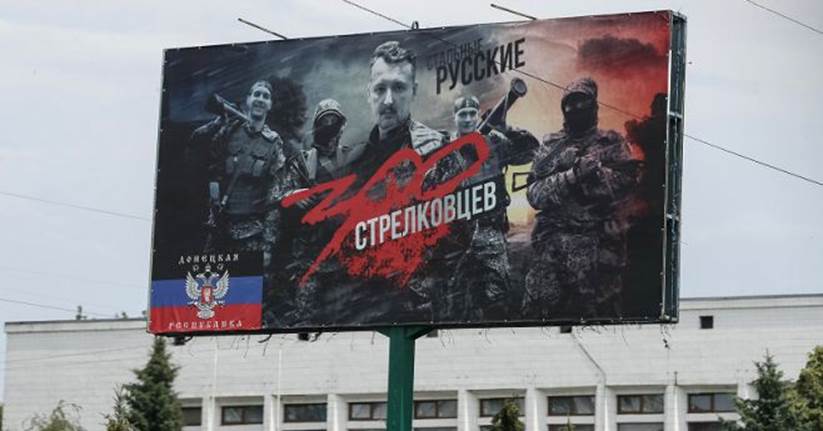 Gone is the all-important civil-war Potemkin-village narrative that Putin attempted to peddle. Ukraine is fighting against Russian mercenaries who have no attachment to the cause other than the $300 per day they are being paid. Obama can rest assured: Military aid is not going to fight fellow Ukrainians but to drive out Russian mercenaries.

Fifth. No diplomatic solution is possible, despite the European Union and OSCE’s intense lobbying for round-table negotiations in the vain hope of freeing themselves of their eventual obligation to pitch in on Ukraine’s behalf. The only viable solution – a military one – cannot be achieved in the drip-drip status quo of a weak Ukrainian army fighting professional mercenaries from Russia.

I have pointed out in my Miles Apart and No Peace in Sight that Putin will accept nothing less than a neutered “federalized” Ukraine that he controls either directly or indirectly. Ukraine cannot accept Putin’s terms for “peace,” which mean complete capitulation. The United States and Europe must understand that Putin will not and cannot back down.

There will be no political solution because Putin does not want one. He is the main beneficiary of violence in Ukraine. Just look at his soaring popularity ratings as the Russian people celebrate Russia’s return to great power status. Putin pulling out and allowing a free and independent Ukraine would be the reverse equivalent of Winston Churchill announcing in 1942 that Herr Hitler is really a decent chap so let’s let him have what he wants.

Violence of current proportions will end only if Russian mercenaries are driven out by the Ukrainian army. Hence Putin insists that Ukraine’s anti terrorist operations must cease as a condition for talks. So far, Ukraine has not fallen for this trap. Ukraine’s handicapped military may already have turned the corner. With real American military equipment, Ukraine’s army can put down the mercenaries, unless Putin wants to risk a full-scale invasion with all its consequences.

There also can be no diplomatic solution when one party to the settlement cannot be trusted. Putin has performed his “man of peace” theatrics too often. The U.S. State Department dispenses with diplomatic language in listing Russia’s false claimsabout Ukraine.NATO officials complain that “Russian officials have been repeatedly misleading and evasive regarding their roles in both Crimea and eastern Ukraine. It is important to bring relevant facts to light in an effort to ensure Russia remains publicly accountable for its actions.” Even the cautious defense minister of Germany says, in an interviewwith Der Spiegel, “Russia has destroyed a massive amount of trust… Currently, Russia is not a partner. Partners adhere to joint agreements.” Deutsche Wellereports even franker talk from the German representative of the Heinrich Boell Foundation in Ukraine: “They (Russia) should just stop with the lies and speak plainly: This is a war, and Russia is a party in this military conflict.”

President Obama can hold off on biting sanctions on the grounds that he must persuade a reluctant Europe to come on board. He has no such excuse with respect to military assistance. Obama today can order the lethal military equipment delivered that will make the difference between defeat and victory. And it will be brave Ukrainians, not Americans, who spill their blood for a cause that the world community has judged as just. How about some leadership rather than following from behind?