Empathizing With The Devil: How Germany’s Putin-Verstehers Shield Russia 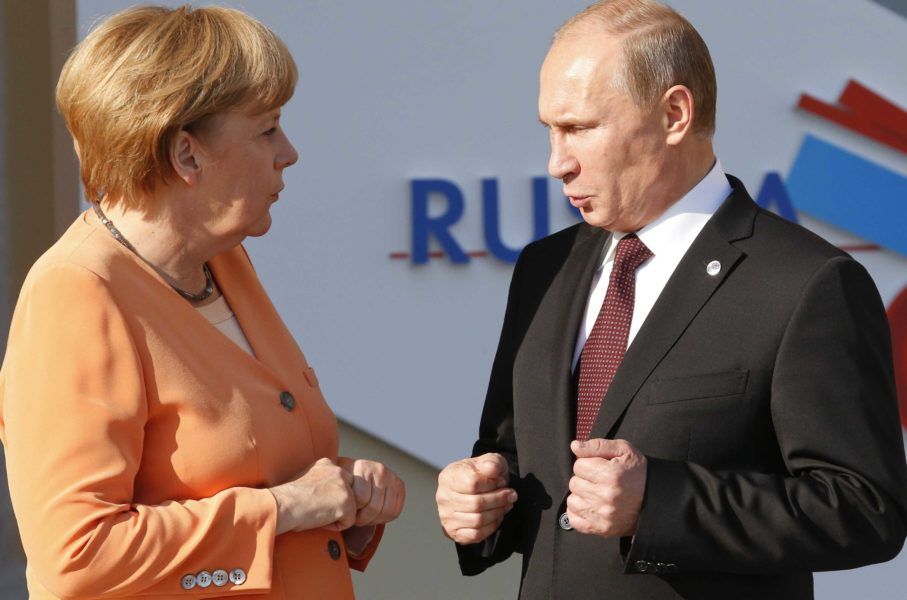 In the days of the cold war, the Soviet Union and East Germany infiltrated their spies into the Bundestag, the federal bureaucracy, and even the chancellor’s (Willy Brandt’s) inner circle. The Federal Republic of Germany was Russia’s most spectacular espionage success, made possible by the common lineage of German communists and the Social Democrats (SPD), who alternated in power with rival Christian Democrats throughout the postwar era.

A quarter century after the end of the cold war, the German social democrats are still providing ideological cover for the Russian Bear along with their cast-out brethren – the ex-communists of Die Linke party. These prominent German Putin-Empathizers (from Versteher or, literally “understander” in German) serve as Putin’s first line of defense against meaningful European sanctions for the Anschluss of Crimea.

In the post cold-war era, the kleptocrats of the Kremlin have largely dispensed with spies and turned to lobbyists to do their dirty work. After all, the Kremlin says, we Russians are now businessmen like everyone else, and we can hire or attract leading figures from German politics, culture, and academe to represent our interests in Germany. We can dangle lucrative contracts before Germany’s largest companies to overlook “temporary difficulties” caused by our civil liberties abuses at home or our aggression in places like Georgia or Ukraine. As people of business, we must all focus on the big picture and not be distracted by petty politics.

First, Germany, with its aggressive EnergieWende, AtomStopp, and environmentalist opposition to fracking, has become more rather than less dependent on Russian energy during the Putin years. Although the windmill turbines are spinning (and spoiling the German countryside) and the solar panels are straining to capture rare sunlight, the Germans understand that they are out in the cold without “GazPutin,” as he is called in some circles. It is either Putin’s gas or the sky-high electricity prices, which threaten Germany Inc.’s fabled manufacturing competitiveness.

Second, although Germany’s overall trade with Russia is only eight percent of the total, Germany Inc’s biggest players (Siemens, Eon, RWE, and the like) have taken big stakes in Russia. If Putin grabs their investments like he devoured Ukraine’s Crimea, they are in trouble. Germany Inc.’s simply keeps quiet and avoids alienating GazPutin, and hopes everything will turn out OK.

The most egregious Putin-Versteher is Gerhard (Gerd) Schroeder (Chancellor 1995 to 2005), who chairs the board of Nord Stream, the northern-route natural gas pipeline from Russia to Europe. Nord Stream’s majority owner is the Russian state gas company, Gazprom. Nicknamed “Gas-Gerd” – a word play on “gas oven” – Schroeder’s official one million dollar honorarium makes him an obedient employee of Mr. Putin. As a member of Gazprom’s own board, Schroeder cannot plead ignorance of Putin’s use of Russian gas as a weapon of foreign policy, as he ups the pressure on Ukraine through higher gas prices.

“Gas-Gerd” has proven well worth his remuneration as the spokesperson for Russian moral equivalence. Although he admits that Putin’s annexation of Crimea violates international law, he, while chancellor, ordered German jets into Serbian-Kosovo skies without United Nations’ approval (What a sin!). No difference at all between the two events, claims the former chancellor. We must accept our own guilt, if we deign to condemn Putin’s takeover of Crimea.

Schroeder also complains that the West has not sufficiently respected Russian “sensitivities.” Putin’s troubled psyche must be understood against NATO encirclement and the historical backdrop of Ukraine as the birthplace of the Russian state, says Schroeder. The annexation of Crimea by Russia is no different from our own support of Kosovo’s declaration of independence from Serbia.

Per Schroder, we should equate the documented mass killing of Kosovo Albanians with possible concerns of Crimean Russians, enflamed by nonstop Russian propaganda, that the Kiev Nazis do not like them and will ban Russian in their daily intercourse, although Crimea’s constitution made it an official second language. Again no real difference between Kosovo and Crimea! Let’s move on. Nothing to see here, says “Gas-Gerd.”

No wonder Chancellor Angela Merkel is furious with Schroeder. What better way to pull the rug from under her negotiations for meaningful sanctions with her coalition partners from Schroeder’s own SPD party. Merkel’s threats to tighten sanctions ring hollow with Putin-Verstehers like Gas-Gerd around. Schroeder’s antics would be the equivalent of Barack Obama trying to negotiate Iranian sanctions with a U.S. former president as a board member of the Iranian National Oil Company, pleading that we must understand the Ayatollahs need a bomb to use against the Western infidel!

Schroeder represents the political wing of the pro-Russian lobby. There is no dearth of business counterparts. The head of Siemens just paid a visit to Moscow where he demonstratively held meetings with a Russian official placed on the United States’ sanctions list, declaring that “temporary turbulence (should not) inordinately influence our long-run planning.” The president of the Union of German Industry warned that “economic sanctions will harm both sides” (What an insight!)

Prominent Germans from other walks of life join the Putin-Versteher chorus. A notable German feminist complained that “in these days and weeks we have seen an unprecedented distortion of the facts (against Putin).” The German vice-president of the EU Commission echoed Putin’s fable of a neo-Nazi government in Kiev by labeling the new Ukrainian government as “real fascists.” The list goes on and on.

The Putin Versteher have also assumed the role of “language police,” under the adage that he who controls the language of discourse ultimately wins the debate. Although the parallels between Putin’s annexation of Crimea and Hitler’s Anschluss of Sudetenland are obvious, German politicians, who dare to compare Putin and Hitler, risk their careers, as Merkel’s invaluable finance minister, Wolfgang Schaueble, learned, after he told a class of school children:

“We know this all from history. Hitler took over the Sudetenland with such methods – and much more. Therefore we must tell the Russians that we are not comparing you with anyone, but you must know that such things cannot be allowed.”

Merkel had to call Schaueble on the carpet for such “irresponsible talk,” after the violent eruption of the indignant opposition and the press. The Russian foreign ministry summoned the German ambassador to complain, and Schaueble had to make the talk show rounds to apologize for his loose talk. Schauble spoke the truth and he paid the price.
Remember the advice given to a young lawyer:  “If you have the evidence, argue the evidence; if you have the law, argue the law; if you have neither facts nor evidence, pound the table.” Putin propaganda machine (which monopolizes all of Russia and east and southern Ukraine) is “pounding the table” by denying, among other things,  that:

Russia’s Crimean invasion violates, among other treaties, the 1994 Budapest Memorandum, in which the U.S., U.K., and Russia agreed to “respect the independence and sovereignty and the existing borders of Ukraine” and “refrain from the threat or use of force against Ukraine” in return for Ukraine giving up its nuclear arsenal.

Unidentified Russian troops carried out the Crimean invasion, despite Putin’s claim that they were “self-defense” forces of local citizens, who purchased their uniforms and weapons in local stores. (To tell that story with a straight face requires Chutzpah).

Russian special forces stormed the Crimean parliament before dawn, locked the doors, allowed in only pro-Russian deputies to install a local mob boss (whose party commanded 4 percent in the last regional election) as the puppet head of Crimea and to call for a hurried annexation referendum, all of this without a quorum. So much for the legality of the Crimean referendum that the Putin-Versteher take for granted.

The Crimean referendum, carried out under the watchful eyes of Russian Kalashnikovs with international observers excluded, gained a Soviet-era 97 percent vote, despite the fact that intimidated Crimean Tartars, ethnic Ukrainians and Belarusians make up 36 percent of the population. Surveys, taken as late as the Euro-Maidan demonstrations, showed less than 40 percent support in Crimea for joining Russia. Less than 40 percent to almost 100 percent! Seems rather unlikely to be true.

Russian forces used civilian human shields to take Ukrainian garrisons without a shot being fired. The use of human shields is a war crime. (I wonder when Putin’s Crimean commanders will face justice in den Haag?)

Putin’s propagandists have yet to present evidence that Crimean Russians were at risk of harm from ethnic violence – the alleged reason for the invasion. Only the disappearances and murders of presumed anti-Russian activists have been recorded to date.

Despite these facts, serious thinkers, such as Helmut Schmidt (Chancellor 1974-1982), are among the Putin-Verstehers. Schmidt declared in a recent interview that “If you placed yourself in Putin’s shoes, you would likely react in the case of Crimea as he did.” Why would a Helmut Schmidt say such things?

The 95-year old Schmidt reflects something deep in the German psyche, beyond the natural pacifism engendered by the World War II tragedy. Social democrats, like Schmidt, instinctively come to the defense of their landmark achievement — Ostpolitik – the notion of finding common ground with enemies in place of confrontation. The SPD party fears that Ostpolitik could be called into question by a firm response to Putin’s aggression. Like Barack Obama, the Ostpolitikers believe that bending over backwards to treat your enemy “fairly” will be reciprocated. Not so with Mr. Putin, Obama has learned. “Fair play” is simply a sign of weakness to the likes of Putin and his KGB cronies.

Anti-Americanism is another staple of the Putin-Versteher.  Shouts of “no weapons of mass destruction, Guantanamo, and NSA bugging of Angie’s Handy (cell phone)” are enough to convince half of all Germans to favor a middle ground between Russia and America. Anti-Americanism provides fertile ground for the German moral equivalence crowd with their Kosovo=Crimea blather.

Putin’s propagandists understand the truth of the Russian invasion of Ukraine. They know that there is no substantive Ukrainian-on-Russian ethnic violence. They know that Ukraine’s provisional government is not overrun with Nazis. They know the dirty tricks used to take control of Crimea’s government and to wring a 97 percent Soviet-era vote under the watchful eyes of Russian troops. They are just doing their job as they explain that black is white and red is blue.

The German  Putin-Versteher either make no effort to learn the truth, or they know the truth but validate the Russian Crimean fairy tale anyway as paid hacks or for business gain, or they use the ideological blinders of Ostpolitik ueber alles, pacifism, or anti-Americanism to look the other way.

German pundits, who have long preached that American foreign policy is dictated by (neocon) ideology and by big business, should look closer to home.  It appears as if Germany’s Russian policy is not driven by democratic norms and adherence to international law, but by what brings profits for German business or fits the ideological template of German leftist politics.

The German operating principle seems to be — to paraphrase the former head of General Motors: “What is good for Siemens is good for Germany.” Such a policy may eventually validate Lenin’s quip that the capitalists (substitute Germans) will eagerly sell you the rope we later use to hang them.