Russian language minority in Ukraine: To the rescue?

The Constitution of Ukraine stipulates that the official state language is Ukrainian and provides for guarantees and protections of minority languages, while placing special emphasis on Russian 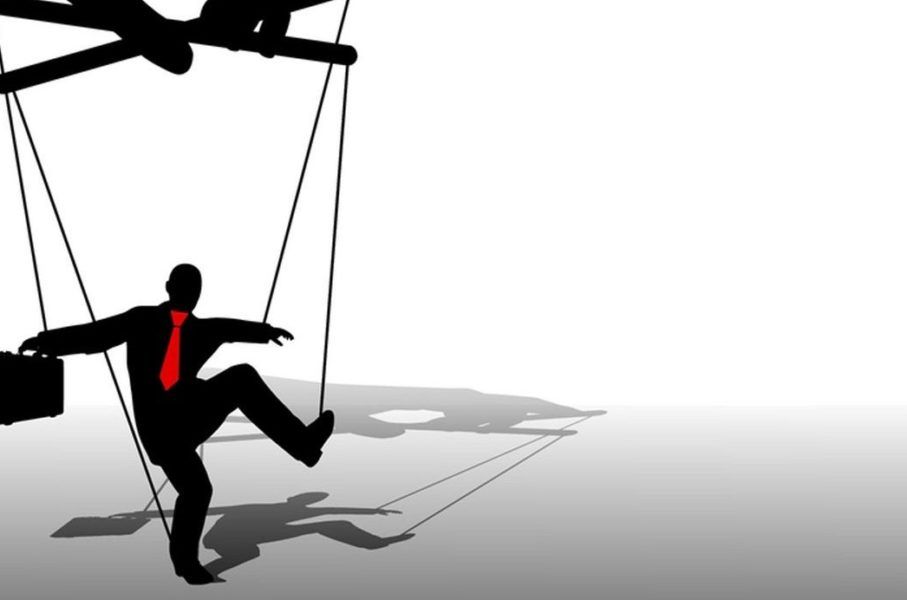 On the numerous occasions, the Russian government declared that the primary reason for the invasion of Russian troops into Crimea was protection of Russian-speaking population subjected to alleged persecution and oppression. This post aims to probe this claim and overviews compliance of Ukraine with its obligations to protect the Russian-speaking minority.

According to the 2001 Census, Ukrainians comprise 77.8% of the population, while the part of Russians in total population accounted for 17.3 %.

The language structure of Ukraine appeared to be more complex. Again according to the 2001 Census, 67.5 % of Ukrainian population indicated that their mother tongue is Ukrainian and 29.6 % of population named Russian as their native language. More recent surveys show a similar picture.

The situation in Crimea is special in many ways: percentage of the population for Russians, Ukrainians and Crimean Tatars is 58.3, 24.3 and 12 respectively. The vast majority of people in Crimea speak Russian.

In general, all surveys indicate that Russian is the second most popular language in Ukraine. The overwhelming majority of Ukrainian population either knows or understands Russian. Russian-speaking population is prevailing in Crimea. The last table is of a special significance in this respect. In 2008 (17 years after the declaration of independence by Ukraine) a little less than a half of Crimean population (43-44%) did not possess a working knowledge of the official language of the state and still successfully functioned, carried out business and participated in social and cultural life of the peninsula. One can’t help wondering how the state of “permanent oppression” and “forced ukrainization” worked there.

The sad ballad on the “Law on languages”

The whole dispute about Russian minority in Ukraine may not be held without proper reference to the history of infamous Ukrainian Law “On the principles of the state language policy”of July 3, 2012 drafted by two members of ex-ruling party: Serhiy Kivalov and Vadym Kolesnichenko (both deserve a separate chapter about their “achievements” on Ukrainian political arena).

This Law gives a status of a “regional language” to a minority language in those administrative districts where the part of representatives of such national or ethnic minority exceeds 10% of the total population. This status permits using such regional language in courts, educational and other governmental institutions. However, this Law mostly favors Russian-speaking southern and eastern regions, where Russian language was almost immediately declared regional language after the Law came into force (e.g. in Crimea). Only a handful of cities and villages managed to obtain similar benefits for Romanian and Hungarian national minorities.

The Law aimed to fulfill obligations of Ukraine under European Charter for Regional or Minority Languages. However, as Prof. Volodymyr Vasylenko accurately noted, the Charter was misinterpreted by authors of the Law: the preamble of the Charter states that its provisions were intended to provide protection to those language minorities which “are in danger of eventual extinction,” and extinction is definitely not the case of the Russian-speaking minority in Ukraine. The bill was criticized as infringing Constitutional provisions and the Budget Code of Ukraine, marginalizing the Ukrainian language, and simulating nationality-based conflicts. It was largely condemned by Ukraine’s governmental bodies (including Main Scientific-Expert Bureau of the Supreme Council of Ukraine, Parliamentary Committee on Budget, Ministry of Finance, Ministry of Justice), specialized institutions of the National Academy of Sciences of Ukraine, 67 civil society organizations, and the Venice Commission.

The bill was adopted regardless of the large protests, students’ hunger strike, fights in the Parliament building and came into force on 10 August 2012. In a year and a half after its adoption, on February 28, 2014, a new post-revolutionary temporary government in one of its first decisions repealed the Law. Without a doubt Russian authorities rushed to condemn this resolution, while media heated up the social tension on the issue. However, this maladroit move of Ukrainian parliamentarians was mitigated by veto on the proposal of the Parliament issued by acting President Oleksandr Turchynov. Hence, Ukrainian Parliament decided to create Temporary special commission and expert group to draft a new bill on the state language policy, which should accommodate the interests of all ethnic groups and minorities and substitute its notorious predecessor.

Although, the “Law on languages” remains in effect, the process of “language federalization” of Ukraine was triggered (exactly as predicted) through artificial and unlawful broadening of the scope of freedoms for one particular national minority (Russian, obviously) and creation of an impression that these freedoms are coercively taken away (in fact, they are not). The whole story becomes especially disappointing in retrospective of russification policies extensively exercised by the USSR on the territories of its republics, which led to marginalization of Ukrainian language and even threat of its extinction (now easily observed on example of eastern regions of Ukraine).

Protection of minority languages in Ukraine

The Constitution of Ukraine stipulates that the official state language is Ukrainian and provides for guarantees and protections of minority languages, while placing special emphasis on Russian.

Article 10. In Ukraine, the free development, use and protection of Russian, and other languages of national minorities of Ukraine, is guaranteed.

Details on how exactly these guarantees are provided for population may be found in this short overview of Ukrainian national minority languages protection, reflecting the guarantees ensured for Russian language in the sphere of education, culture, public associations and media. Interesting detail to add to this summary is that in 2009 there were only seven schools in Crimea, where the official working language was Ukrainian. That was the lowest regional rate in the whole country, which is indicative of the general situation in Crimea.

On January 15, 2014 the Committee of Experts of the European Charter for Regional or Minority Languages released Report and Recommendations on Application of the Charter in Ukraine and stated that “the protection of national minorities and their languages continues to enjoy a high level of legal recognition in Ukraine.” In respect of the Russian language Committee specifically underlined that most undertakings chosen by Ukraine under the Charter are fulfilled or partly fulfilled, while the “Language Law” is “inter alia being applied to Russian, but not to most of the other minority languages”. Therefore, attention of the public authorities should rather be drawn to Belarusian, Bulgarian, Crimean Tatar, Gagauz, German, Greek, Hungarian, Moldovan, Polish, Romanian, Slovak and Yiddish languages. The pages 154-163 of the Report provide detailed data on Ukrainian compliance with obligations under the Charter in respect of Russian language in education (pre-school, primary, secondary, technical and vocational, university and higher, adult and continuing education, teaching of history and culture), judiciary and administration, public services, media, cultural activities and facilities, economic and social life.

Another interesting fact that goes along with language discussion is OSCE decision to carry out comparative study on educational rights of Russian minority in Ukraine (April 20-25, 2009) and ethnic Ukrainians in Russian Federation (March 9-14, 2009). The report apparently revealed that Ukraine provides for much higher standard of protection than Russia does. The short summary of this report is provided in the chart below, but more information on this comparative monitoring may be found in the interview with Pavlo Poliansky, Ukraine’s Deputy Minister of Education and Science. 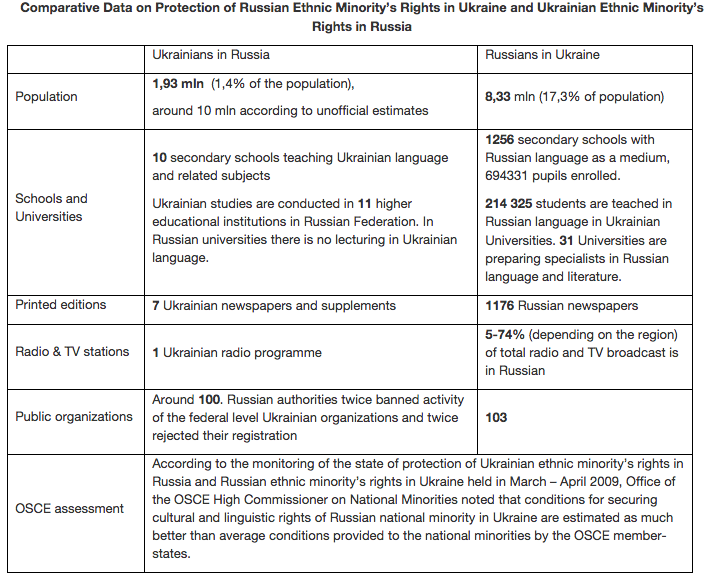 The persecution of Russian-speaking population in Ukraine has never taken place. Crimea, as well as other Russian-speaking regions of Ukraine, enjoyed a broad variety of guarantees and possibilities to cherish Russian language and Russian cultural heritage. Among all 130 other national and ethnic minorities, Russian language minority was distinguished with special beneficial treatment. However, controversy over the disputably legitimate “Law on languages” provoked significant social conflict and provided the speculative excuse for Russian authorities to expand its territory by means of Crimean accession.