How should Ukraine grow? A tale of three countries | VoxUkraine

How should Ukraine grow? A tale of three countries

Ukraine is at a critical junction in its history since it became an independent state in 1991. Victor Yanukovych and his corrupt government are deposed by the people of Ukraine, yet the menace of Russian invasion into mainland Ukraine creates a sense of insecurity and uncertainty about the future. What lies ahead of Ukraine is not clear. However, one can look at the historical economic performance of Ukraine to understand the roots of current problems and the potential for future development.

In 1991, immediately after Soviet Union’s collapse, Ukraine and Poland had similar levels of GDP per worker, while Russia was significantly richer (see Figure 1). All three countries experienced a typical decline of output in the early stages of transition from planned to market economies. In Poland, the contraction was relatively short and shallow. In contrast, both Russia and Ukraine had deep contractions which lasted until mid to late 1990s. The Ukrainian economy contracted by staggering 60 percent, which is extremely unusual for country not plagued by war or civil unrest and which makes the Great Depression of the 1930s a modest recession. 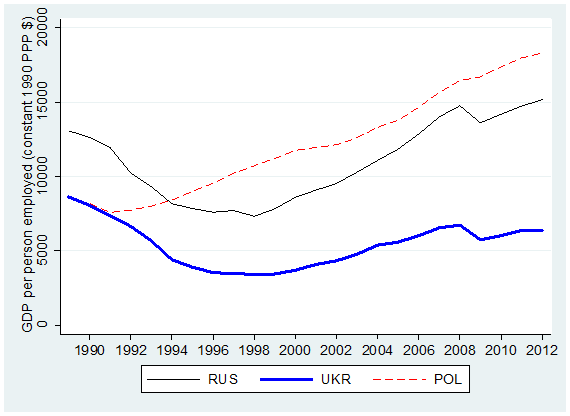 By 1995, Poland had a higher GDP per worker than Russia, which was a remarkable reversal of fortunes. Russia started to catch up after 2000 when oil and gas prices increased significantly. While Ukraine began to grow at about the same time, the growth rate was very sluggish. In fact, it was so slow that even by now it has not reached the level of output it had in 1989. The Russian economy came back to the 1989 level in 2006, but its level of output per worker is still lower than the Polish one – which more than doubled since early 1990s. Remarkably, while the Great Recession hit the Russian and Ukraine economies very hard, the shock was much less noticeable in Poland.

Should Ukraine emulate Russia or Poland? While the output per worker is a useful metric of economic welfare in a country, it is clearly incomplete and can hide important differentiation in the quality and sustanability of economic development. Figure 2 shows that the sources of economic growth are likely to be very different between Poland and Russia. According to estimates of the World Bank, over 30 percent of GDP in Russia was a rent based on natural resources. On the other hand, the rent in Poland was less than 5 percent of GDP. Clearly, the high growth in Russia requires high oil/gas prices and, at some point, this source of growth is likely to run into diminishing returns and therefore Russia is likely to run into a slowdown. One may recall that the Soviet Union had a similar cycle when high growth and living standard were sustained by high energy prices in the late 1970s and early 1980s, but the Soviet economy had really hard time (and eventually collapsed) when energy prices fell. Obviously, Ukraine, with the rent at less than 10 percent, can’t grow like Russia but the path of Poland suggests that economic growth does not have to build on natural resources. 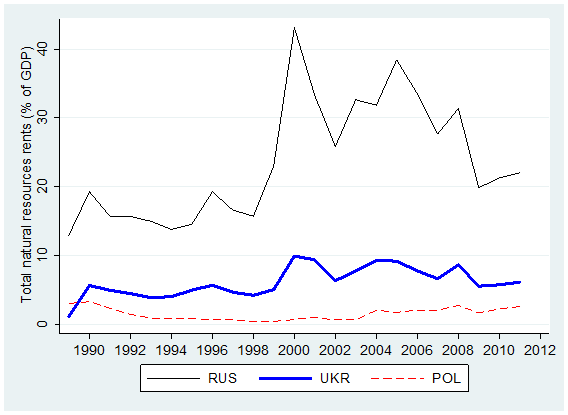 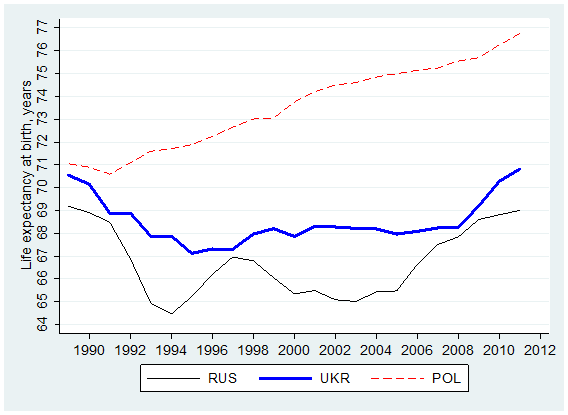 In summary, Poland and Ukraine had similar initial conditions after the collapse of the Soviet empire. Poland’s economy really took off while the lack of economic growth in Ukraine has been tragic in many ways. Many people in Russia and Ukraine believe that Ukraine needs a strong hand, like Putin in Russia, to guide the economy to economic growth and come close to Russian standards. However, a handful of statistics discussed in this blog suggests that a much more desirable route is to emulate Poland that had really built its success on decentralization of economic and political decision as well as free enterprise of the market economy.