Forced Experiments and the Collapse of the "Suprun Reform": A Review of Health Care Narratives. Issue #10

In the week between July 21 to 27, fakes about the COVID-19 pandemic continued to circulate: conspiracy theorists said that the world was allegedly abandoning vaccines, because “nobody needs” them anymore. The essence of the new draft law on medicinal products was also distorted and users stated that this law would allow illegal experiments to be carried out on Ukrainians. The russian occupiers once again demonized the Ukrainian medical reform and pretended to solve the humanitarian crisis in Mariupol.

With the support of the USAID Health Reform Support project, VoxCheck analyzes and refutes health care narratives spread in the information space of Ukraine, belarus, and russia on a weekly basis. Read previous issues at this link.

Mal-information: The occupation administration restored the water supply in Mariupol

On July 23, a message appeared from the emergency service of the “Donbas Water” enterprise that all four districts in occupied Mariupol received water. The water pressure is currently limited due to damage to the water supply system, the maximum water supply is up to the 3rd floor of the buildings. They tried to establish a water supply in the city even earlier, and drinking water was distributed as humanitarian aid for pensioners and in return for work on the occupiers for young people. But the occupation administration keeps silent about the main thing: this water does not meet sanitary standards and is not suitable for drinking.

Water remains one of the biggest problems in occupied Mariupol, the Mariupol City Council reports. Attempts by the occupiers to turn it on end in breakthroughs and street floods. And the sewage pumping stations do not work, so all the dirty sewage gets into the soil and water.

Earlier, the Mariupol City Council published the results of a study of the water that the occupation authorities distributed to people as drinking water. The water sample was collected by volunteers in Mariupol and sent to the Zaporizhzhia Center for Disease Control and Prevention. 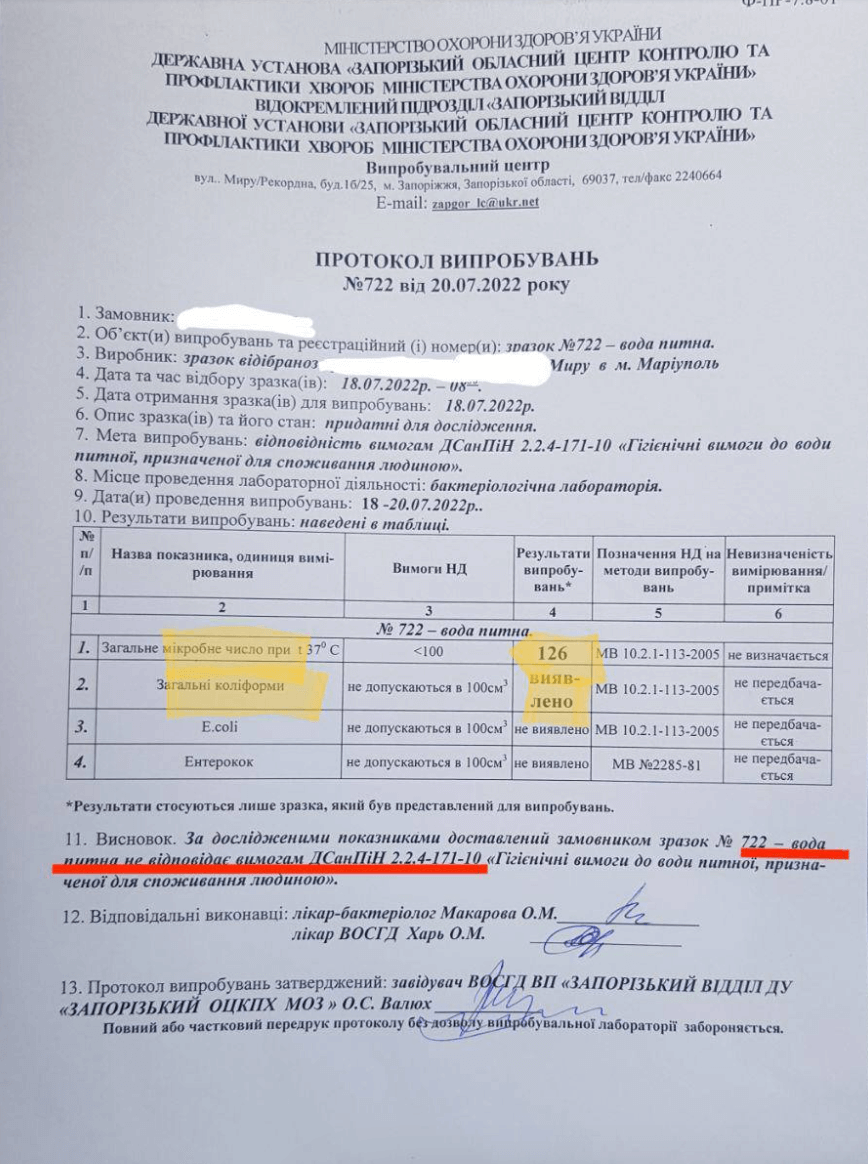 Coliforms (a group of bacteria found in large concentrations in fecal matter, some of which can cause disease in humans) were found in the water. This means that the water is mixed with fecal matter. It is forbidden to drink itt: there is a high risk that it can be contaminated with other pathogenic microorganisms that can “carry” dysentery and cholera with it. Petro Andryushchenko, an adviser to the mayor of Mariupol, added that this water is collected from the Kalchyk River.

“According to sanitary norms and rules, general coliforms should be absent in drinking water. These bacteria belong to the bacteria group of Escherichia coli. They are typical for surface still waters. Therefore, this water is not sufficiently disinfected for human consumption”,  the conclusion of “Vodokanal” (Water treatment plant – ed.) specialists conveyed in the Mariupol City Council.

Residents of Mariupol are advised to boil this water to avoid poisoning.

Disinformation: The occupying authorities of the Kherson region cancel the medical reform because it “killed medicine”

On July 26, the so-called “military-civilian administration” of occupied Kherson announced that they are canceling the “Ukrainian reform “named after Suprun”, which killed medicine”, and the consequences of the reform were “liquidated“. The occupiers stated that they had canceled all attempts at optimization, which allegedly involved the liquidation or privatization of medical facilities. And they declared that now in Kherson Oblast “there are no state, communal and other institutions – they have all become state.“

The medical reform does not mean the liquidation and privatization of medical institutions. Previously, medical institutions received a medical subvention from the state — an annual fixed amount that did not depend on the quality and quantity of services provided. Hospitals were financed according to the number of beds and the area of ​​the infrastructure.

At the second stage of the medical reform (from April 2020), hospitals began to receive funds only for services provided in accordance with their tariffs. Hospitals that prepared for the reform and met the necessary requirements were able to conclude contracts with the National Health Service of Ukraine (NHSU) and receive state funding.

Medical reform means that hospitals that meet certain quality indicators receive more money. But funding from the National Health Service is not the only source of income for medical institutions. Hospital owners — local councils — can invest in them from local budgets. In addition, medical facilities have the right to provide paid services to patients: this is allowed by the status of communal non-profit enterprises. Therefore, institutions that do not receive sufficient funding from the NHSU can look for other sources of funds, instead of closing down.

Today, medicine in Ukraine is being killed precisely by the russian occupiers. According to the Ministry of Health, since the beginning of the full-scale invasion, russia has damaged 817 health care facilities in Ukraine and completely destroyed 122. To restore the facilities to the condition they were in, more than 35 billion UAH are needed, and to repair the destroyed ones, more than 15 billion UAH. In addition, at least 469 health care facilities are currently under occupation and it is not known how many of them can continue to operate and provide the services patients need.

Disinformation: Since March 2022, people have practically stopped getting vaccinated against COVID-19, so the “world elites” are already planning a new pandemic

On July 24, Ukrainian conspiracy theorist Serhii Hula released a video blog with fakes about the COVID-19 pandemic. He said that:

In 2022, the pace of vaccination did slow down compared to the end of 2021, but there was no complete halt to the vaccination campaign. Vaccinations continued in all countries where a vaccine against COVID-19 was approved. Thus, as of March 31, 2022, since the beginning of the pandemic, 11.2 billion doses of vaccine (143 doses per 100 people) have been used in the world, and as of June 30, 2022 — 12.1 billion doses (154 doses per 100 people). Even in Ukraine under martial law, medical institutions continue to carry out vaccinations against COVID-19. A list of available vaccination points can be found at this link.

Vaccines against COVID-19, approved by WHO for emergency use, are effective in protecting against severe disease and death. Vaccines protect somewhat less against infection and symptomatic disease, but vaccination reduces the burden on the health care system, which is extremely important for providing care not only to patients with COVID-19, but also to other patients.

In June 2022, 10 EU countries actually advocated renegotiating their contracts with vaccine manufacturers because they had sufficient vaccine stocks. As early as 2021, the problem of uneven distribution of vaccines arose, where rich countries had the ability to order excessive amounts of vaccines, while poor countries, on the contrary, did not have enough resources for even minimal protection against COVID-19.

On July 19, the Financial Times reported that the EU and Pfizer and BioNTech could agree to postpone part of the deliveries planned for 2022 to 2023-2024. That is, we are talking about a possible change in the volume and schedule of deliveries, and not about refusing vaccination altogether. None of the mentioned 10 countries (Bulgaria, Croatia, Estonia, Hungary, Latvia, Lithuania, Poland, Romania, Slovakia, Slovenia) refused vaccination, they continue the vaccination campaign.

Big pharmaceutical companies make money selling vaccines, but this fact is by no means proof of conspiracy theories about “secret meetings” where the fate of the world is decided. In addition, the profits of vaccine manufacturers can be used for research and development of new drugs. For example, technologies invented during the development of vaccines against COVID-19 can help develop cancer vaccines.

New pathogens (microorganisms that cause disease) occur naturally, they are not created in laboratories. As we wrote in previous monitoring issues, both COVID-19 and monkeypox most likely have a natural origin. Over the past 30 years, scientists have discovered more than 30 new pathogens dangerous to humans. Most of them first spread among animals and only then were transmitted to humans. Moreover, modern living conditions — high population density in cities, economic interdependence of countries, and the possibility of international travel — contribute to the rapid spread of diseases, so a new disease is rarely limited to only one settlement or one country.

In a video published on July 25, 2022, anti-vaccinator Ostap Stakhiv says that thanks to draft law No. 5547, the pharmaceutical industry will be able to forcibly conduct experiments on Ukrainians, and draft law No. 4142 will limit the rights of Ukrainians to free movement.

The purpose of draft law No. 5547 is to bring the Ukrainian legislation on medicinal products closer to the norms of the European Union. The project also proposes to improve the regulation of production and registration of drugs, clinical trials, quality control, drug trade, etc.

This draft law does not propose forcing Ukrainians to participate in clinical trials of pharmaceutical companies. On the contrary, the text states that only volunteers who provide written consent can become test participants (in the case of children, the consent of parents or their legal representatives is also required). By the way, according to the current legislation of Ukraine, a person’s written consent is also required to participate in a clinical trial.

In addition, the draft law provides for the preservation of current norms: clinical research can be conducted only in the event that their expected benefit to public health is higher than possible risks. Trials can be stopped if there is a threat to the health of the study participants, ethical standards are violated, or the effectiveness of the drugs is insufficient.

Draft Law No. 4142, which establishes the principles of the functioning of the public health system, does not deprive Ukrainians of the right to free movement. Conspiracy theorists also often claim that this bill proposes to introduce compulsory vaccination, but this is not true. Lawmakers only plan to simplify the procedure for granting consent to vaccination and expand the list of infectious diseases against which the population will be vaccinated.