Psychotropic Substances Are Supplied for the Armed Forces of Ukraine, and a Disaster Is Being Prepared at the ZNPP: A Review of Health Care Narratives. Issue #11

Psychotropic Substances Are Supplied for the Armed Forces of Ukraine, and a Disaster Is Being Prepared at the ZNPP: A Review of Health Care Narratives. Issue #11

In the week between July 28 and August 3, a fake report circulated on social networks that psychotropic drugs were officially supplied to the Armed Forces of Ukraine. The russian occupiers constantly lied about the attacks on the Zaporizhzhia NPP by the Armed Forces of Ukraine, which they actually carried out themselves. And the kremlin channels convinced: while Ukraine prepares grain for export, ordinary Ukrainians do not have enough bread.

Users of social networks write as if the russian military found a report that proves that psychotropic drugs are supplied to the Armed Forces of Ukraine. In the report addressed to the commander of the 72nd Separate Mechanized Brigade, Colonel Vdovichenko, it is written that a new batch of some drugs that arrived at the end of June “causes concern.” In social networks, users write that “in the official documentation of the Armed Forces of Ukraine, drug deliveries are recorded.” 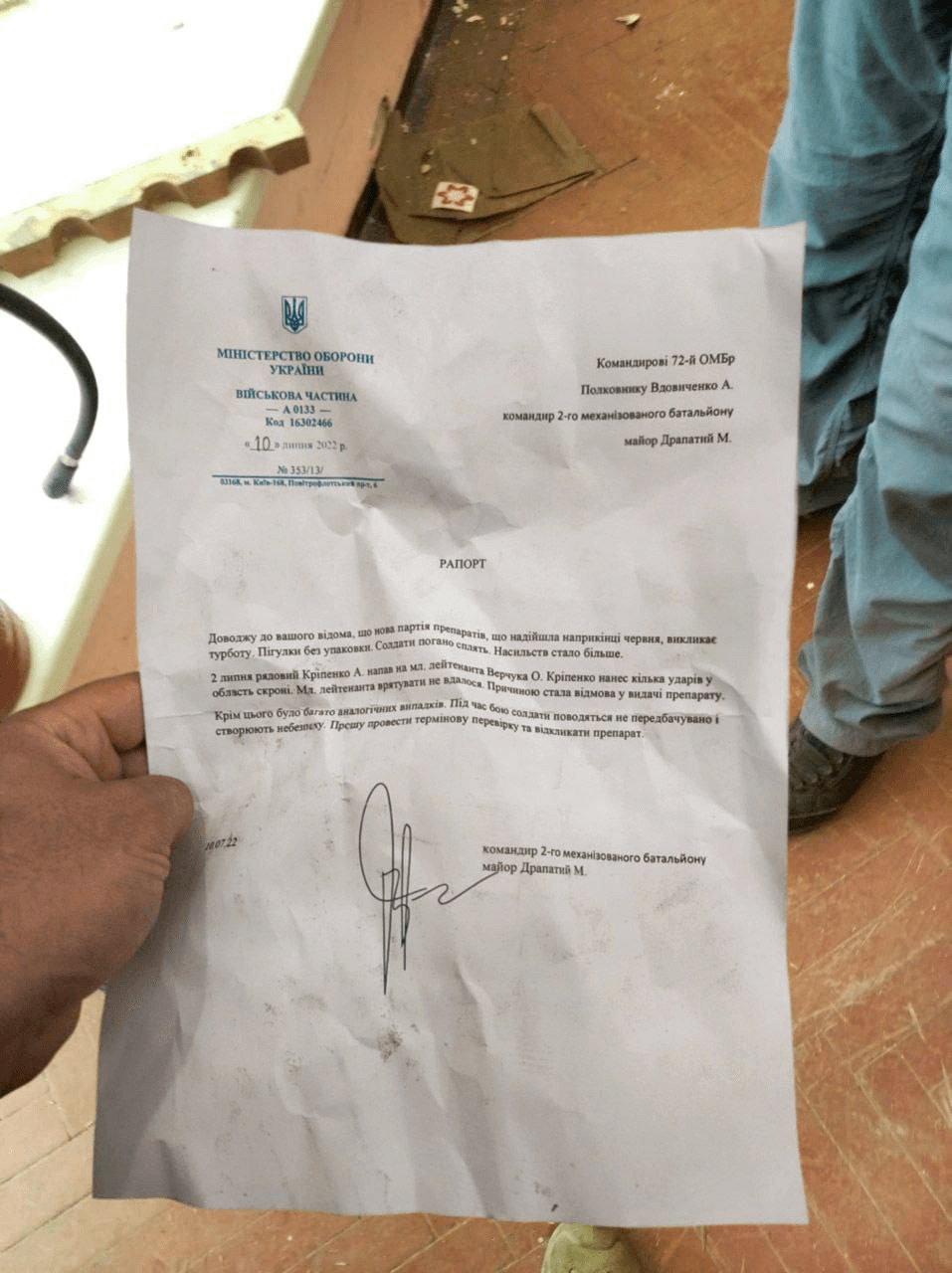 Photo of a fake document

The report is most likely a fake. It does not contain any specific information: neither the names of the drugs, nor their purpose, nor the number of supplied units, the exact dates of receipt, information on the number of military personnel who declared the mentioned complaints, etc. Instead, it is about vague complaints: “the military is sleeping”, “the violence has increased”. At the same time, only one case of violence among the military is mentioned — and it allegedly occurred due to “refusal to issue the drug.”

From February 24, 2022, he participated in the repulse of the armed aggression of russia and commanded the units of the operational group of troops “Kakhovka”, which liberated a number of settlements in the Kherson and Dnipropetrovsk regions. As of July 2022, he is the deputy commander of the forces of the Operational Command South.

The document also contains a number of errors in the translation from russian, which may indicate its forgery:

Russian media systematically generate fakes about the so-called “combat drugs” for the  Armed Forces of Ukraine soldiers. In the previous monitoring issue, VoxCheck refuted the story about the “drug laboratory” in Rubizhne.

Disinformation: Ukraine is provoking a large-scale man-made disaster at the ZNPP

The representative of the russian Ministry of Foreign Affairs, Ivan Nechaev, said Ukraine regularly fires at the Zaporizhzhia NPP because it is deliberately provoking a large-scale man-made disaster. Allegedly, the Ukrainian side is showing “maniacal zeal”, seeking to harm Europe’s largest nuclear power plant, and is violating the resolution of the IAEA General Conference, the occupier said.

From the very beginning of the seizure of the station, the russians tried to shift the blame for the shelling of the ZNPP to Ukraine. However, all these reports turn out to be false. Let’s consider only a few Russian fakes from July, which preceded Nechaev’s statement about Ukraine’s attempts to stage a man-made disaster.

For example, on July 12, the Institute for the Study of War (ISW) reported that probably russian troops themselves carried out an attack under a foreign flag in Enerhodar. On July 12, russian informed about a series of explosions in Enerhodar, geolocation images showed that smoke was coming from the direction of the ZNPP. Pro-kremlin sources said that Ukraine fired at the station.

The mayor of the city, Dmytro Orlov, said that russian troops fired at Enerhodar to cause crowding at the exit from the city. The russians planned to use it as a “human shield” of civilians before a counterattack by the Armed Forces of Ukraine. Earlier, Orlov warned that russian troops gathered media representatives in Energodar to stage a provocation at the Zaporizhzhia NPP.

And on July 20, russian media reported that allegedly the Armed Forces of Ukraine had struck a nuclear power plant, injuring 11 workers. The press service of Defense Intelligence of the Ministry of Defense of Ukraine announced that the military destroyed the tent city of the occupiers near the ZNPP. As a result of the attack, 3 soldiers of the russian federation were killed, 12 were wounded. Bellingcat journalist Wim Zwijnenburg published satellite images that confirm that the strike was directed at the tents of the russian military.

As for the IAEA, Nechaev persistently ignores the document addressed specifically to russia.

On March 3, the Board of Governors of the IAEA adopted a resolution condemning the actions of the russian federation in Ukraine. And, by the way, mentioned the resolutions of the IAEA General Conference regarding attacks on nuclear facilities. In the context that it was russia that violated them.

The IAEA condemned russia’s forcible seizure of nuclear facilities and other violent actions, as they pose serious and direct threats to the safety of these facilities and their civilian personnel. This significantly increases the risk of a nuclear accident or incident that endangers the population of Ukraine, neighboring states and the international community, the IAEA emphasized. And they called on russia to immediately stop activities at nuclear facilities so that the Ukrainian authorities would restore control over them.

Back in March, IAEA Director General Rafael Grossi said that the seizure of the station contradicted one of the seven essential components of nuclear security: personnel must be able to carry out their safety and physical security duties and be able to make decisions without undue pressure. Later, in an interview with The Wall Street Journal, the NPP workers talked about the constant pressure from the russian military.

Disinformation: While Ukraine is starting to export grain, people in Odesa are standing in huge queues for bread

On August 1, the first ship with Ukrainian food left the Odesa port. Against this background, the russian media distributed a video where residents of Odesa are allegedly standing in line for bread. Also, under some videos, users indicated the address where a long queue formed — 24 Davyd Oistrakh Street. 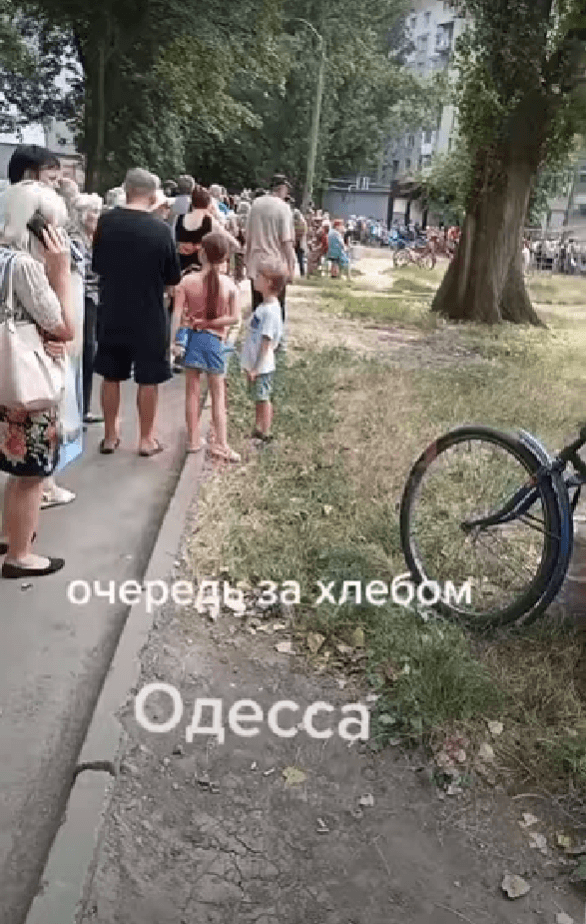 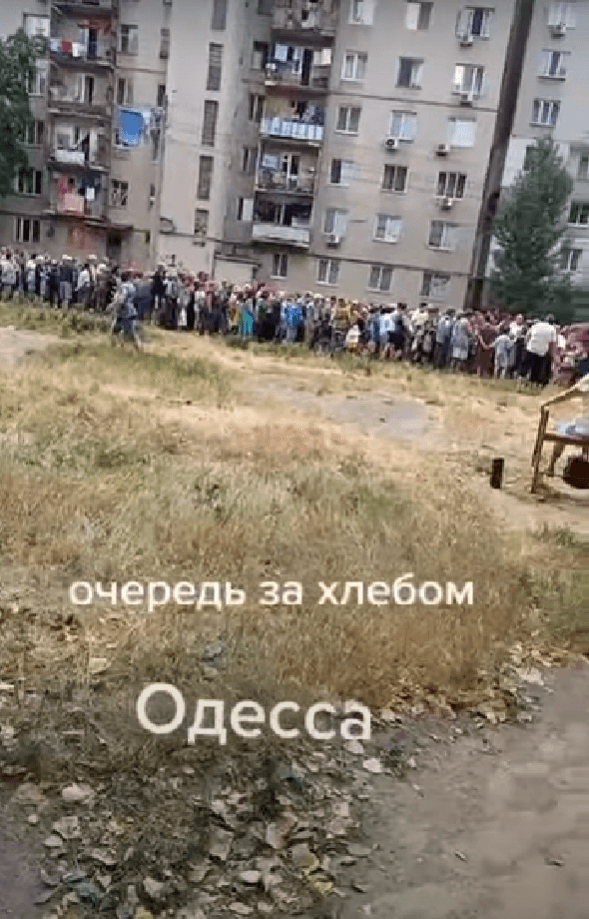 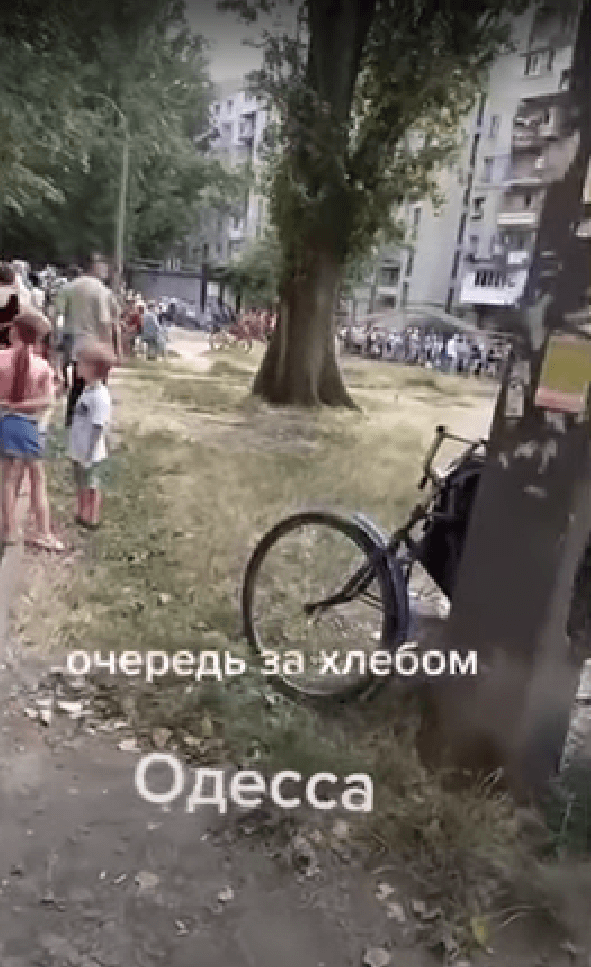 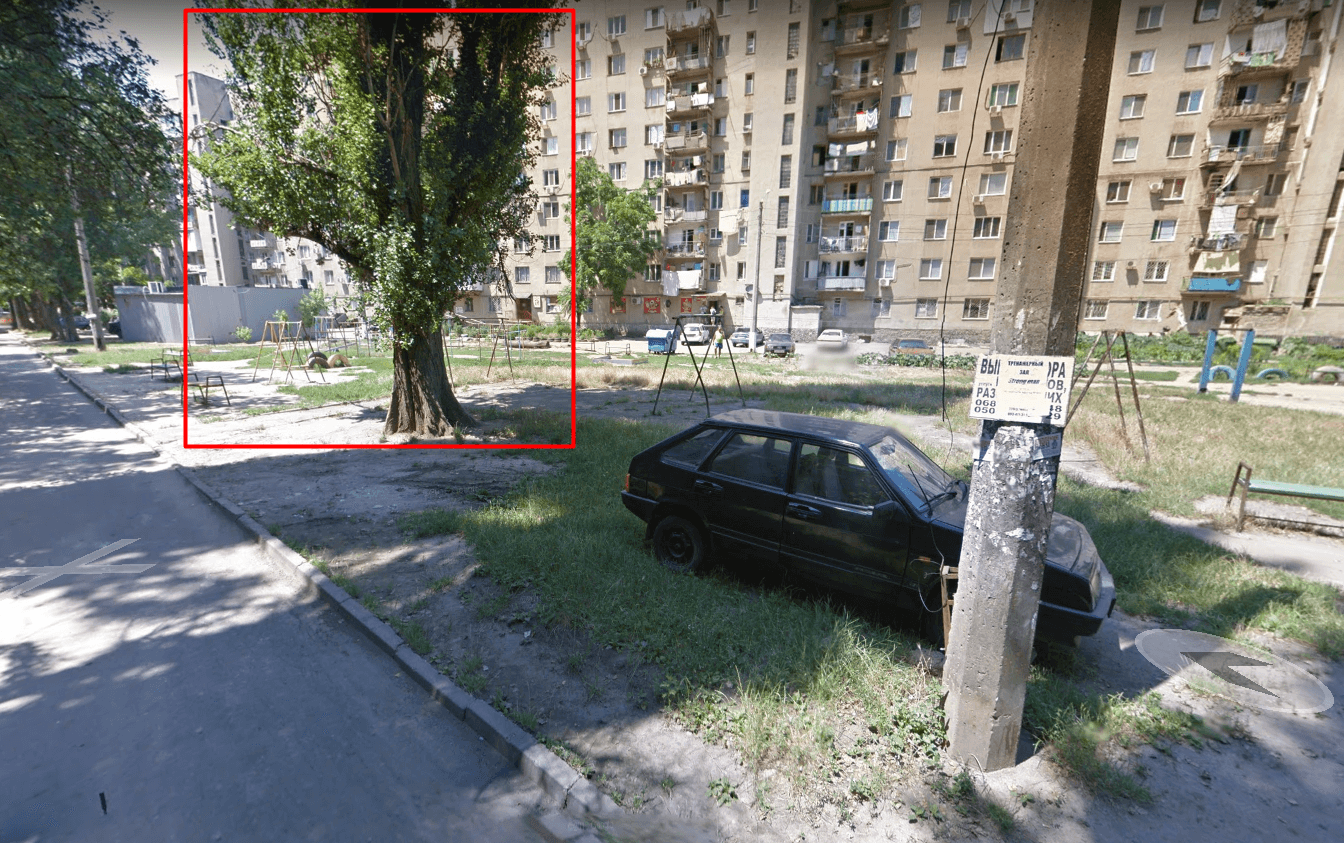 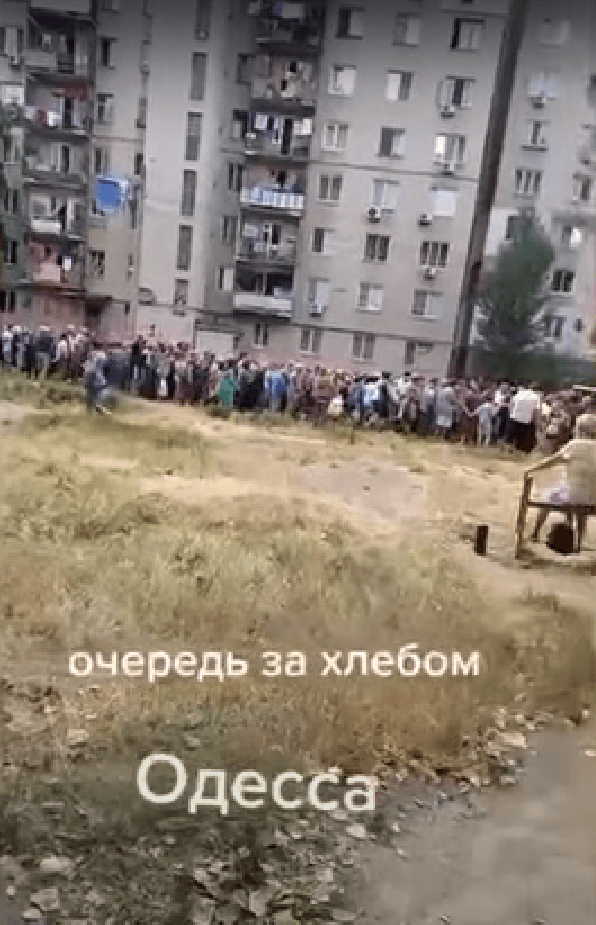 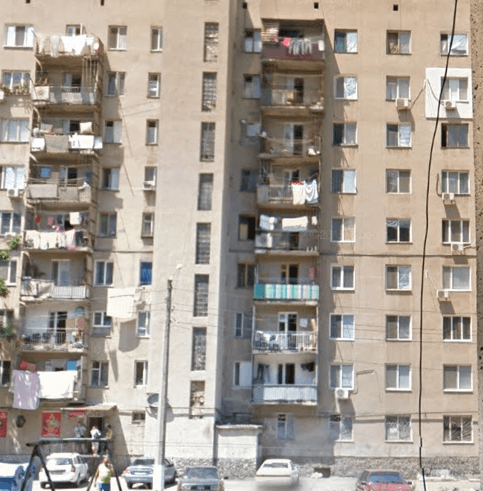 Videos with the queue began to be distributed on July 31, 2022. We were unable to find this video before July 31st. There are no elements on the video itself that would indicate the date of shooting.

Currently, it is impossible to establish precisely when and why such a long queue could have formed. There are no large grocery stores in the yard near this apartment building. Also, there are no permanent humanitarian aid distribution points in Odesa at this address.

However, we can confidently say that this video in no way proves the existence of any food problems in the city. On August 4, Serhii Bratchuk, the spokesman of the Odesa regional military administration, stated that Odesa is fully supplied with food. Food markets and shops continue to operate in the city.

Previously, VoxCheck repeatedly wrote that Ukraine produces much more food than it consumes. For example, this year, Ukraine plans to collect 5 times more wheat than is needed for the population’s needs.

Grain export is an essential source of filling the state budget, especially in the conditions of the decline of many sectors of the economy due to the war. Recently, the Minister of Agrarian Policy stated that Ukraine expects to receive at least 20 billion dollars from grain exports by the end of the year.

Disinformation: In various cities the Armed Forces of Ukraine station troops on the territory of hospitals

On July 27, the Ministry of Defense of the russian federation and the russian media once again accused the Armed Forces of Ukraine of allegedly using civilians as “human shields.” This time, the propagandists mentioned several “facts” at once:

In fact, the Armed Forces of Ukraine do not use working hospitals for military purposes and do not use civilians as “human shields.”

In Sumy, the territorial defense headquarters is located on Troitska Street. But there is one “but”. It is located on the territory of a former hospital, which no longer works. Back in January 2022, the Sumy City Council transferred the building to the Regional Military Committee for territorial defense tasks. Before this, the premises were used by a children’s hospital located on the same street and the regional health department.

Already in February, there were reports about the work of the headquarters on Troitska Street. That is, no one hid the existence of the Territorial Defense headquarters, it is located separately from medical facilities. And, of course, it does not have any medical workers and patients who are “forcefully kept in the basement”.

On Pyrogova Street in Vinnytsia, there is only one psychiatric hospital – the Vinnytsia Regional Clinical Psychoneurological Hospital named after Academician O. I. Yushchenko of the Vinnytsia Regional Council. Journalists from the “20 Minutes” media visited this hospital and took several photos of the hospital yard. It was impossible to find any evidence of the placement of military equipment on the territory of the facility. In addition, the head of the institution asked the UN representative office to come and record the absence of military equipment. 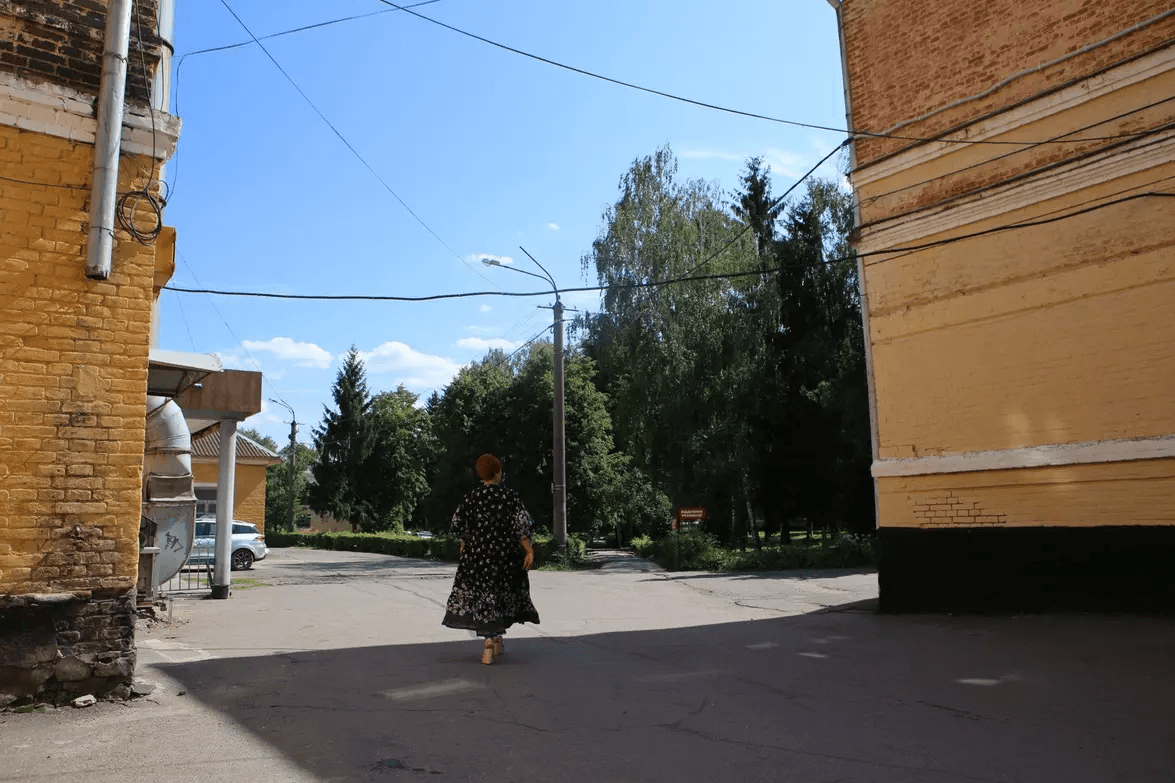 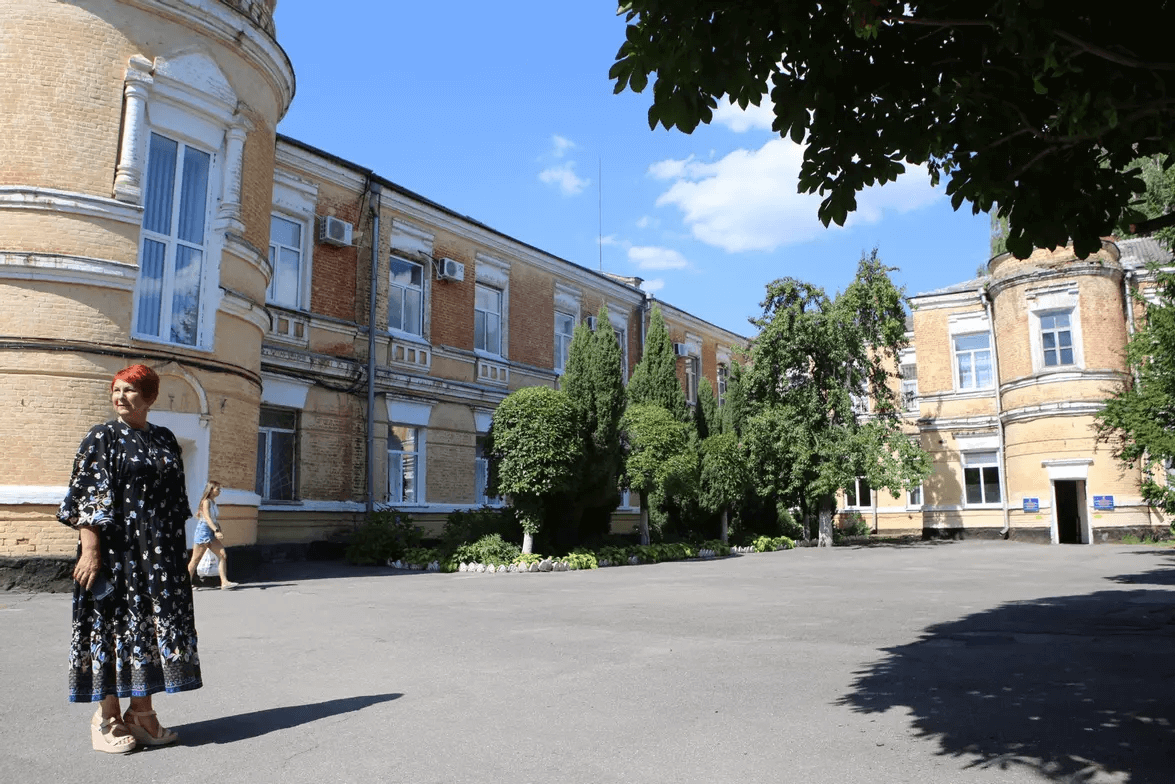 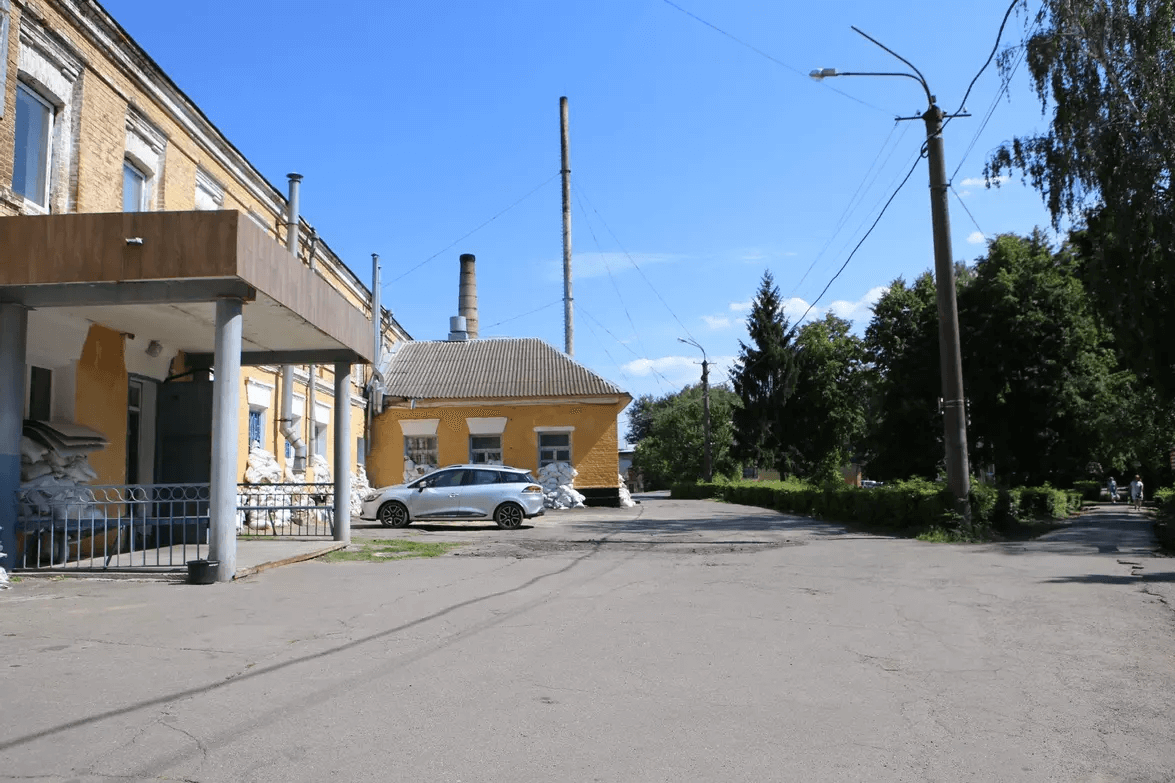 The courtyard of the hospital in Vinnytsia. Source — “20 minutes”

Regarding the City Clinical Hospital No. 7 in Kharkiv (Saltivske Highway), the Kharkiv City Council refuted the statement of the Ministry of Defense of the russian federation and reported that such information attacks are aimed at justifying russian missile attacks on civilian objects and demonizing Ukrainians.

Russia regularly accuses Ukraine of violating international humanitarian law and committing war crimes. However, it is precisely russia that regularly violates international norms and shells civilian objects in Ukraine, including medical facilities. In previous monitoring issues, we have refuted similar russian fakes about the alleged use of Ukrainian hospitals for military purposes.