Acts of Faith: Did Religion Influence Voting for Poroshenko After All? | VoxUkraine

The assumption that Tomos did not pay off for Poroshenko seems to be based on a simple observation that he lost. However, this does not mean that there was no effect at all. Is it true that Tomos did not work? Or the effect of Tomos did play some role but rather weak? I argue that, in contrast to what many have assumed, religious competition and Tomos did boost voters to support Poroshenko. Yet, it was not enough to win the elections.

Acknowledgments. Many thanks to Peter Bodnar from Texty.org.ua for his help with the dataset.

For this article, I refer to the data on the transition of religious communities from the Moscow Patriarchate to the Orthodox Church of Ukraine. A map of such transitions was published online [3,4] and has been used by the research community [5,6].

These data should be treated carefully. It is based on media and sometimes self-made reports by the local activists. It can include both transitions and attempted transitions as well as still ongoing transitions. Also, a few transitions were registered after the elections. Nevertheless, for the purpose of this article, I treat this data as a signal of church competition. All these events are proxy of religious competition at the local level. The information on the local dynamics is not present in the data, i.e. the role of local priests, communities or political actors in each case is not known. Yet, the very fact of these events signal that Tomos was taken seriously in these particular territories.

I merge these data with the data on electoral results for the second round of elections at the level of precincts. Overall, there are 510 cases of transition in the final dataset (Table 1). 510 is a relatively small number. In total, the dataset has 29,965 observations (this is excluding foreign electoral precincts).

Table 1. Transitions from the Moscow Patriarchate to the Orthodox Church of Ukraine

The dataset includes only 1.7% of precincts where a church made a transition (in a village or in a city nearby the precinct). Yet, a closer look at these few cases can reveal something interesting. Figure 1 plots the total number of transitioned churches (x-axis) and the average vote for Poroshenko (y-axis) for each oblast. Oblasts are classified by regions and marked on a plot with colors and shapes.

Figure 1. Number of transitions and support of Poroshenko 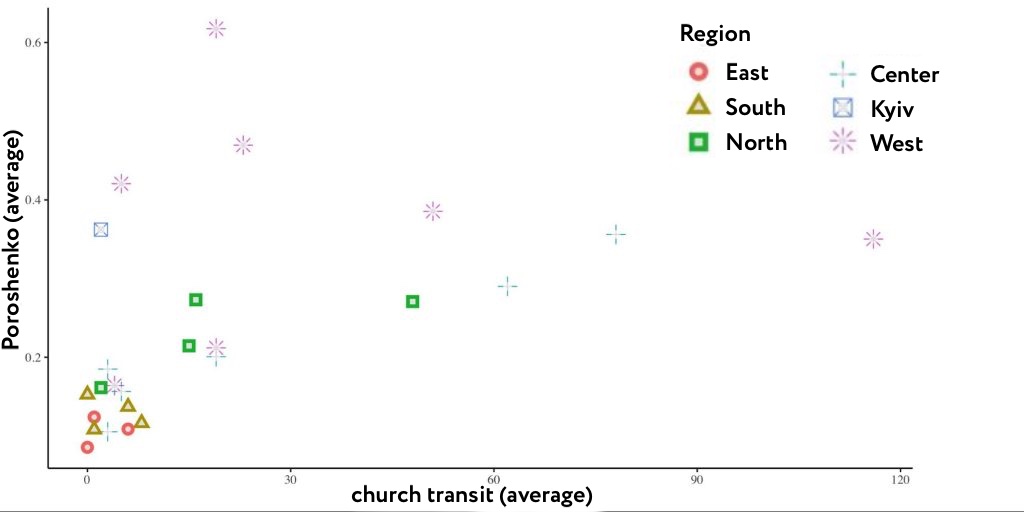 Figure 1 shows that the correlation at the level of oblasts is modest. Western region and Kyiv gave Poroshenko a lot of votes regardless of the number of transitions. However, other regions display an interesting pattern. If one moves from east to south and then to north and center, then they would see more support to Poroshenko in oblasts with more transitions.

This pattern is better seen at the level of precincts. Please note, that in some regions the number of transitions was very small (Table 1). Nevertheless, it is interesting to compare a few villages where Tomos was taken seriously against other local territories (Figure 2). A few simple observations from the data:

[6] Wanner, Catherine. “An Affective Atmosphere of Religiosity: Animated Places, Public Spaces, and the Politics of Attachment in Ukraine and Beyond.” Comparative Studies in Society and History 62, no. 1 (2020): 68-105.