Given official statistics are not available, we use changes in nighttime light intensity, measured by satellites, to estimate to what extent the war has destroyed the economy, and whether any recovery can be observed since the Minsk II agreements.

Correct measurement of economic performance is difficult enough in peaceful times and in scenarios, in which reliable economic indicators are available. However, when the necessary data is missing or when its reliability is far from clear, assessing the degree of economic activity – even in the most crude of forms – becomes a significant challenge. And yet, such situations are very frequent, apply to many countries and regions and become most evident at times of military conflicts when data collection is far from a top priority. In the context of the Ukrainian conflict an example of indirectly estimating changes in economic performance can be found in Talavera & Gorodnichenko (2016) who focus on measures of the degree of price integration in the so called Luhansk and Donetsk National Republics (LNR/DNR). In addition, there are various articles using anecdotal evidence to illustrate the economic losses in the East of Ukraine. For example, BBC, 2015 mentions an estimate by the Ukrainian Ministry of Economy that by mid 2015, 50% to 80% of jobs were lost in the so called Luhansk and Donetsk National Republics, compared to the pre-war situation. Knowing the economic situation in the East is important both to assess the economic viability of the so called Luhansk and Donetsk National Republics (LNR/DNR) as well as to assess the likely humanitarian situation in the East. 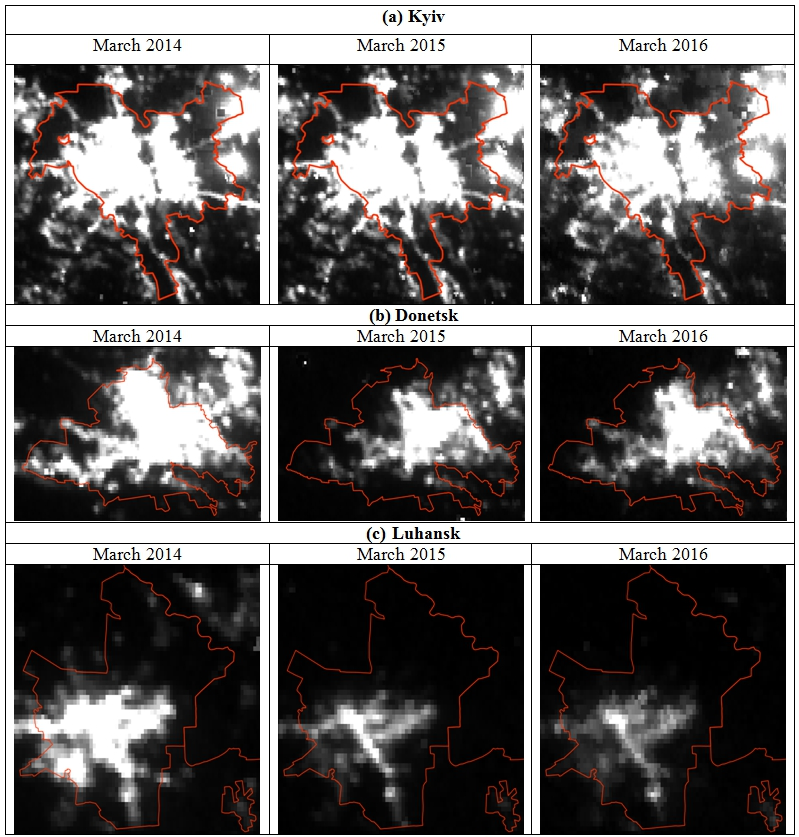 Figure 1 presents sample images of nighttime illumination for Kyiv, Donetsk and Luhansk in March, 2014, 2015 and 2016. We can see that between March 2014 and 2015, in the case of Donetsk and Luhansk, both the surface area lit as well as the measured light intensity significantly decreased, while there is very little change in the case of Kyiv. A similar picture emerges in other cities that were not directly affected by the war, such as, for example Zaporizhia, Dnipropetrovsk and Kharkiv (see Table 1). While, as in Kyiv, there are ups and downs in terms of measured nighttime light intensity, by and large, the level of economic activity remains fairly similar over time.

The situation is clearly different in Donetsk and Luhansk, the two major occupied towns. Nighttime light intensity in Donetsk is about half of the level it was before the outbreak of violence in the East of Ukraine. Luhansk fares even worse – light intensity as measured in March 2015 and 2016 is roughly a third of the initial level (Table 1).

The numbers in the table are ratios of light intensity, comparing a given point in time to March 15, 2014. Hence, the number 1 suggest no change, numbers over 1 suggest improvements, numbers below 1 suggest decreases in economic activity.

Ilovaisk and Debaltseve, two cities where major battles took place and which are now under control of the so called DNR/LNR, clearly have suffered a lot and are still far from recovering. Illovaisk is at about a third of its original level of light intensity, while Debaltseve is at less than a tenth (!) of the level in 2014. It is thus clear that economic recovery in these areas takes a long time, and that this is also true for the government controlled areas. This is illustrated by the fact that cities such as Sloviansk and to a lesser extent Kramatorsk are also still far away from their pre-conflict level of light intensity.

Second, there has been no sign of economic recovery in the region since the Minsk I and II agreements. Even though military activity in the Donbas region has decreased compared to the period April 2014-February 2015, the economy – at least as measured by the intensity of lights – has not been improving and the economic situation of the Donbas population remains very far from what it used to be before the war.

[1] The elasticity of growth of lights emanating into space with respect to income growth is close to one (p. 1025)

[3] Given the specificity of light intensity measures, we focus on changes between periods rather than levels because light intensity is computed as the sum of radiance over a selected area, and hence the level of intensity depends on the scale of the area. For comparisons over time, we always use the same geographic area. It is important to remember that these changes are proxies only since changes in light intensity can be sensitive to weather conditions over time. Thus, to be able to make informative judgement on the basis of these data, we focus on the broad picture that emerges from the data, rather than on specific values.