Socrates, a Contemporary of the Future, and A Man from the Beginning of the Alphabet, Kakha Bendukidze, was a hard core proponent of the the ruthless budget (waste) cutting. One of the latest articles he co-authored reflects Kakha` understanding of priority action-steps for Ukraine, and succinctly summarizes relevant suggestions on expenditures reduction. In a nutshell [1], Ukraine should cut public expenditures by no less than 10% of GDP, as current budgetary position is becoming a threat to the national security.

This line of thinking is extended in the following article based on budget review conducted by a VoxUkraine team comprised of Dmytro Boyarchuk, Vladimir Fedorin, Serhiy Marchenko and Ilona Sologoub. This piece has a remarkable meaning, as the idea to initiate the project was born during the conversation with Kakha, and because it illuminates the contrast between purposeful tactics and “actions barely connected to the common good”.

A simple analysis of the State Budget for 2014 allows to find opportunities for savings of up to 3% of GDP. Proposed structural reforms will lead to even more efficient use of the budget funds over the 1-3 year horizon.

Currently Ukraine has rather big government as compared to other countries: 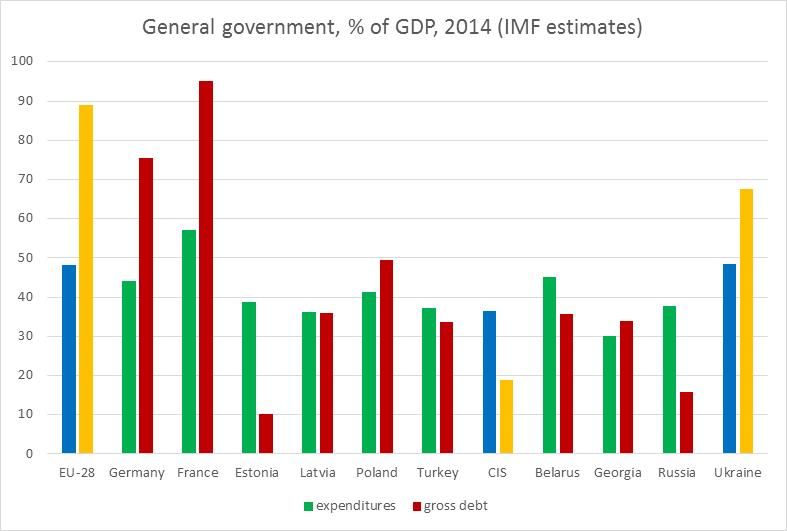 Diagram 1 shows that in Ukraine the share of GDP redistributed by central government is comparable to “old” EU countries, and is much higher than in post-Soviet or neighbouring countries, to which Ukraine is usually compared.

Today, when budget revenues are falling, and possibilities for borrowing are scarce, this level of spending becomes unsustainable – so there is no alternative to budget cuts. Our calculations show that it is possible to reduce budget expenses by about 3% of GDP since 2015 by elimination of the obvious waste (a detailed file with calculations can be downloaded here). Freezing the rest of budget expenditures in the nominal terms would reduce Central budget expenditures from current 29% of GDP to 23% of GDP (using IMF forecast of GDP).

The main items for economy: reduction of expenditures on the staff of central government bodies on average by 25%, liquidation of ministerial “R&D” units because they do not produce any tangible results, restructuring of the Academies of Sciences (as a result of reform, research should be financed on the project basis), freezing of the state support of the coal mines on the occupied territory. The results of calculations are presented in the following table:

Further reduction of budget expenses  would be possible within the next 1-3 years under the condition of implementation of structural reforms proposed below.

1. Optimization of public procurement procedures. There are two components of this – (1) reduction of the size of the government and introduction of new technologies (e.g. a government body that employs less people and uses electronic document flow, will need less paper, pens and printer cartridges), and (2) reduction of “kickbacks”. The first component will be implemented during general government reform described below, the second one needs raising transparency of the government, namely, a prompt on-line publication of all the documents related to public procurement (this should be prescribed by law). To further raise transparency, each government body should publish its very detailed budget for the year, so that their needs became clear before tenders are announced. For example, if some ministry intends to purchase a few iPhones for its staff, the public should see it in its budget published at the beginning of the year rather than in the “Visnyk Derzhzakupivel”.

2. Optimization of the state enterprises network. Today, each ministry owns several (sometimes dozens) of enterprises that work in a non-transparent way, consume state resources and often distort respective markets. Among the most notorious examples is the state company “Ukrekoresursy” that is directly subordinate to the government and without a contract with which no packed goods can be imported to Ukraine. These enterprises should be audited, and afterwards either liquidated or privatized. This measure would allow to kill several birds with one stone – to reduce government expenditures and quasi-fiscal pressure on business, to receive privatization revenues, and to liquidate hotbeds of corruption.

3. Reform of state monopolies – Naftogas, Ukrzalianytsia, Ukravtodor and the like, which are extremely non-transparent and allegedly loss-making. First, audit them, then split and sell whatever possible. Naftogas reform is an essential part of the energy reform, which also implies elimination of cross-subsidization and closing of unprofitable mines. This article provides very strong arguments for the Naftogas reform. In fact, if this stone remains on the neck of Ukraine, our country will sink.

4. Transfer to means-tested social benefits system. Ukrainian privilege-based social protection system favors mostly people who can pay for themselves. Thus, only a third of expenses aimed at social protection reach the poorest 20% population. Means-tested system will target those really in need, and at the same time save budget funds. All the privileges to social groups should be cancelled.

6. Agricultural reform. If a working land market is introduced, this would allow to considerably reduce subsidies to agribusiness because the land will be reallocated to more efficient owners.

7. Governance reform (deregulation and raising of state management efficiency). This is not a very fast thing if done properly but it will result in considerable savings. As an immediate measure, the expenses on the state management can be reduced by 25% since January 1st, 2015. This reduction is justified because for no obvious reason the number of state officials increased from 275 thousand in 2012 to 335 thousand in 2013, or by more than 22%. Recent change in the composition of government bodies is a step in the right direction, but it is only a start.

We propose function-based approach to the composition of the government mechanism. This approach is described in the following table – this is just a sketch, and we invite everyone to participate in the discussion.

Based on the above table, the tentative list of government bodies that can be liquidated looks like this:

We admit that the governance reform, as any other reform, will require some investment before it starts bearing fruit. The most obvious source of funds for this investment is privatization.

Note: we did not consider local budgets, budgets of the Pension Fund and other Social Security funds, as well as budgets of state monopolies, such as Naftogas, Ukravtodor, Ukrzaliznytsia, so we did not spot all the inefficiencies in the government spending.

Thus, the decentralization reform would reduce subventions to local budgets considerably. Although the central budget revenues would also be reduced, we suppose that this reform would lead to more efficient usage of local budget funds.

Budgets of the state monopolies are simply not available, but possibilities for economizing (as well as for rent-seeking) in these enterprises are enormous.

The article also appears in Ліга.Бизнес