Can Ukraine play MAD with Russia? 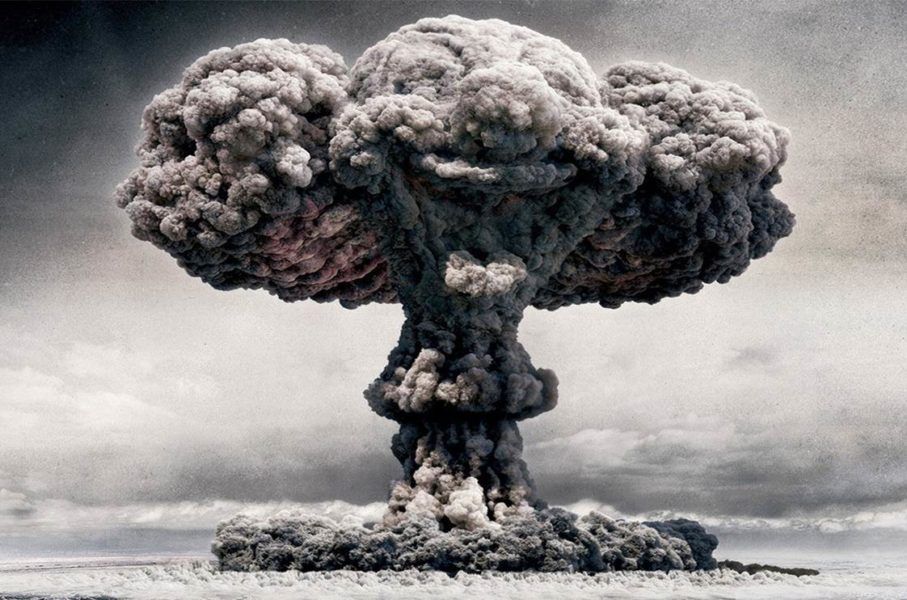 The stand-off between Russia and the West is increasingly reminiscent of Cold War times. Russia’s annexation of Crimea, giving weapons to separatists in the East of Ukraine, shooting down MH17, and most recently the direct invasion of Ukraine by Russian troops has made Russia an isolated, pariah-like state. In all likelihood, this confrontation is likely to continue for a while—at least until Mr. Putin steps down—so Ukraine should prepare for a long period of tensions with Russia with a significant risk of escalation into an open war.

As military assistance from NATO will likely remain limited and the West appears unwilling to inflict any meaningful economic damage on Russia unless and until an EU/NATO country is attacked, Ukraine will have to predominantly face this confrontation alone.

Obviously, the prospect of an open Russo-Ukrainian war is terrifying not only for Ukraine but also for Russia since the death toll is going to be huge. Russia has every tool to stop escalation and normalize the relationship between countries if it wishes to do so. Since Ukraine is a “little brother” in this relationship, its ability to stop the “big brother” from bullying is more limited. However, the experience of the Cold War teaches us that there are a number of policies Ukraine could follow to make the prospect of a war so costly for Russia that it will not invade Ukraine openly and en masse.

In a nutshell, the USSR and USA did not engage in an open conflict because of the doctrine of mutually assured destruction (MAD), adopted by both adversaries. Neither country dared to openly challenge the other one in a combat because an attack with conventional weapons or nukes would lead to an almost certain annihilation of the attacker. Even preventive strikes were so risky that the military doctrines of both countries were framed as defensive ones, that is, both the Soviet Union and the USA “promised” only to strike in reciprocity. This MAD turned the conflict into a “cold” war instead of a “hot” war. The Cold War was extremely costly but the cost of a hot war between these superpowers would have been unimaginable. So in retrospect, the Cold War was a lesser evil.

If Ukraine had nuclear weapons, the current Russian aggression and threats would almost certainly have never happened. But Ukraine gave up the 3rd largest arsenal of nukes in 1994 in exchange for assurances (the Budapest memorandum) from the USA, the UK and Russia that these countries would guarantee the sovereignty and territorial integrity of Ukraine. These assurances proved to be of little value to Ukraine when Russia deeply interfered into Ukraine’s internal affairs. Altogether, Russian action and Western inaction have dealt an immense blow to the credibility of non-proliferation treaties and military alliances, as the commitment to any assurances from “guarantors” is now viewed at best as highly questionable.

So if a big, nuclear power can violate the sovereignty and territorial integrity of small countries while the other big powers fail to protect the small countries despite security guarantees, what steps can small countries take to offset the numeric superiority of big countries?

One option is to pursue the development of nuclear weapons so that any quantitative advantage in conventional weapons of big countries is irrelevant. This is, for example, why Israel presumably has nukes. It is not beyond the realm of possibility that Ukraine could, in response to a persistently hostile environment, choose to have nuclear weapons as well. It certainly has the technological capacity to develop nuclear weapons and the means to deliver them. It is doubtful that the nuclear club countries would have much moral authority to stop Ukraine from acquiring these weapons, should the country decide to do so, given their failure to live up to their own security guarantees toward Ukraine. We can only hope that the world is not going down this route, but Putin’s reckless policies may leave Ukraine little other long-term option.

But Ukraine does not have a nuclear “red button” to stop Russian aggression now and will not for the foreseeable future. It is also clear that, like any other normal country, Ukraine does not want to have bloodshed. Are there other “red buttons” at Ukraine’s disposal that can make the cost of invasion or military confrontation unbearable to Russia? We believe there are several such “red buttons.”

Despite Russia’s efforts to lessen its dependence on Ukraine for the transit of natural gas, about half of Gasprom’s exports reach Europe via Ukrainian pipelines. A significant share of Russian oil is also transported through Ukraine via pipeline and rail. According to the US Energy Information Administration, oil, natural gas, and petroleum products accounted for two thirds of Russia’s export revenues in 2013. These simple facts together imply that Ukraine has the capacity to deal a huge economic hit to Russia by disrupting the country’s energy exports through its territory. If this is done by inflicting serious physical damage to the relevant infrastructure, the hit would be both significant and potentially long-term. This, in our opinion, is the first and the most powerful “red button” in Ukraine’s hands.

The second “weapon” at Ukraine’s disposal is related to the close ties between the two countries’ military-industrial complexes (MIC) that existed up until the current conflict. Before 1991, the Ukrainian MIC was an integral part of the larger Soviet complex, and some ties have been preserved up to now, especially where the most sophisticated weapons are concerned. For example, the Yuzhmash plant in Dnipropetrovsk has been servicing Russian SS-18 Satan Intercontinental Ballistic Missiles (ICBMs), with an agreement signed in 2006 to extend the life of those ICBMs. One can conjecture that Yuzhmash might possess some highly sensitive information which, should it end up in NATO’s hands, could compromise the Russian nuclear arms capabilities. Almost certainly, other examples of this kind can be found. We would qualify this “red button” as potential, since we, for obvious reasons, do not have the full picture on either the nature of the sensitive information in Ukraine’s hands, or the extent of the damage that could be inflicted to Russia by divulging this information to NATO.

Finally, Ukraine can use the Crimean Peninsula’s near-complete dependence on Ukrainian resources to inflict damage on Russia. Russia is in no position to quickly find sufficient alternative sources of food, electricity, and water, should Ukraine limit or discontinue its supplies. This will have a quick significant adverse effect on the quality of life on the peninsula, could lead to civil unrest there, and perhaps more importantly for Putin, increase dissent in Russia. We would however suggest that Ukraine could use this “red button” only in the event the other two are not available, due to the risks it involves. First, cutting off supplies to Crimea indiscriminately punishes the part of the population that remains loyal to Ukraine (moreover, as the quality of life deteriorates, the pro-Russian population of Crimea may choose to use the pro-Ukrainian citizens as scapegoats, instigating violence and ethnic cleansing of Crimean Tatars). Second, any Russian retaliation (including military response) could be viewed by some countries in the world as an attempt to avert a humanitarian disaster – and would certainly be presented as such by Russia via its network of lobbying groups and propaganda channels in the West.

As is the case for any “red button”, the possibilities described above should only be used under extreme duress – i.e., in the case of an immediate existential threat to Ukraine. For example, the use of these tools could be triggered by a Russian attack on any of the main strategic population centers (e.g., Kyiv, Kharkiv, or Dnipropetrovsk). If Russia understands that Ukraine will credibly use the “red buttons” available to it, this knowledge alone could prevent a full-scale Russian military attack, in the same way that understanding that your adversary would use its nuclear weapons if attacked prevented escalation of the Cold War into a full-scale military conflict. The current absence of any such threats combined with the unwillingness of the West to counter the Russian aggression leaves Putin little incentive to back down. The long-run sovereignty and territorial integrity of Ukraine depends on its ability to deter future Russian aggression. Since the West cannot or will not provide this deterrence, it’s time for Ukraine to fully consider all of the means at its disposal.