Can Ukraine Repeat The Path Of Asian Tigers? Or Should It Bother At All? | VoxUkraine

Can Ukraine Repeat The Path Of Asian Tigers? Or Should It Bother At All?

Very often we hear Ukrainian policy-makers say that our country should increase exports of high-value added goods. As examples they usually name products of electronics or machine-building industries, or more specifically, airplanes and ships. We explain that agricultural products such as fruit or honey have more value-added than, for example, manufacturing of mobile phones from imported parts. We suggest that Ukrainian companies should either try to enter the global value chains or find their highly differentiated market niches where they have most of the production cycle within the country.

Many policymakers in Ukraine are concerned with the prevalence of the primary commodities in Ukrainian exports. Thus, in 2018 exports of goods which can be classified as primary exceeded 70% of Ukrainian total exports*. While it is true that primary commodities are often associated with low value added, complex manufacturing goods do not often generate higher value for the exporting country. There is a common confusion about high-tech goods and high value added goods. A high tech good is not necessarily generating high value added, while a simple product or even commodity may bring high value to its producer. This happens if a large part of inputs (which are expensive) are imported and hence only final assembly creates value added**. And if wages are low in the country exporting high-tech goods with many imported inputs, the resulting value for the country may be low.

Moreover, in the modern world high-tech goods are produced by large multinational companies over long supply chains where each link gets some share of the final value added. It includes research and development, branding and design, manufacturing and distribution. Each part of the process acquires a part of value added, but manufacturing retains only a small share of it. Figure 1 illustrates this point in a “smiley face” concept developed by Stan Shih. Originally, this concept was applied to computer industry, but it extended to textiles and other areas. Even though it may not be applicable to all industries, it clearly demonstrates the pattern of value added distribution and also suggests ways for the firms from developing countries to increase the value added of their products.

Figure 1. Distribution of value added along the production cycle

A company from an emerging economy has no resources to have a full production cycle and needs to be included into production chains of large multinational enterprises to be able to produce high-tech goods. One of the solutions would be to engage in services at the two sides of the value chain. This approach is suggested, for example, by Canadian government for their SMEs.

In addition, some highly technological industries, such as aircraft building, require long term investments into research and production, which are constantly updated to keep up with the development of new technologies and new market conditions (i.e. environmental regulations and fuel efficiency requirements) — a luxury for a single country, not to mention an emerging economy like Ukraine.  As a result, they do not generate profits in the short run and in some cases producers incur losses even in the long-term, requiring heavy government subsidies over a long horizon. A celebrated example of a commercial failure is the development and production of the wide-body jet A380 by Airbus. Overall, Airbus received support in the form of $22 billion subsidy to develop its A380 and A350 jets. However, economists*** had been warning that there would not be enough demand for the A380 and hence, the profits received would not be enough to cover the costs of development. In 2019, following the lack of orders, Airbus announced that the production of this superjet would be terminated in 2021 generating huge losses for the EU. Another example of misuse of budget funds and failure to produce a competitive product is Sukhoy Superjet 100 in Russia.

At the same time, production of less technologically advanced products can have a full cycle within a developing country and local companies may retain much higher value added. Over the last several decades countries that export commodities — products that do not require R&D and long value chains — outperformed exporters of more technologically advanced products in generating value added and economic growth. According to research by D. Jacks (Figure 2), since 2006 the price of commodities relative to manufactured goods (solid line) is higher than most of the time during the XXth century, while the long run trend of the price (dotted line) is also above the average for the XXth century. Since value added depends on price, it also means that commodities outperformed manufactured goods in growth of  value added. 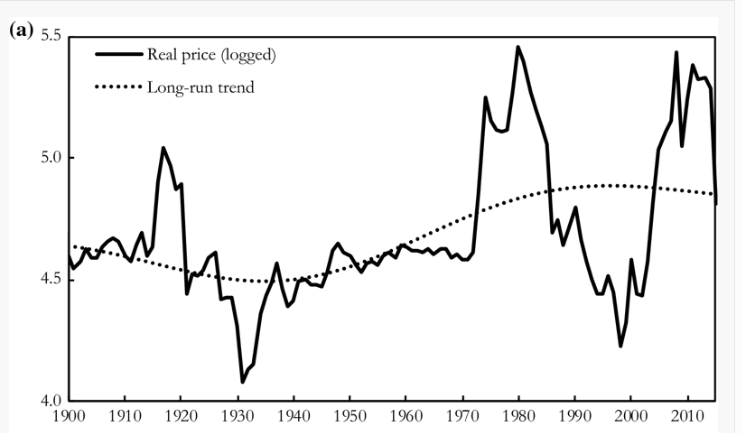 Examples of goods with relatively high value added and full production cycle in Ukraine include agricultural and food products, like honey and fruit juice. Since the world population is growing along with the level of income, the demand for these goods is expected to grow worldwide. Ukraine is also a top-5 exporter of insulated electric wires to the EU, another example of a product for which  Ukraine has a full production cycle.

Demand for highly differentiated goods by modern sophisticated consumers gives another opportunity for generating high value added, where even small companies may find high profit margins. Producers of such goods have market power and are able to set high prices leading to higher profit margins. Successful examples include Marina Group from Kherson producing and exporting charter boats and Tysa from Mukachevo producing and exporting skies. However, these niche products can be produced only on a small scale and require efforts for product design, promotion and distribution.

To sum up, modern day companies from emerging economies are able to produce high tech goods only as a part of long supply chains. This strategy makes sense in the long run, as a company would learn how to produce advanced products and in the future may be able to offer technological improvements and acquire market power in some market segments, a strategy that Chinese and South Korean companies have been using quite successfully. However, they are not able to retain high value added in the shorter term, unless they specialize in R&D, design, or marketing of these products. An alternative is to provide less technologically advanced products, where a large part of the supply chains is contained within the company. It is possible, especially if the company finds its niche and establishes itself as a producer of high quality highly differentiated product valued by consumers.

The article was prepared with the support of the Foreign trade research center Trade+. The Center was established at the Kyiv School of Economics in the framework of the project “Promotion of a Supportive Framework for Trade in Ukraine”, that is implemented by the Deutsche Gesellschaft für Internationale Zusammenarbeit (GIZ) GmbH on behalf of the German Government.

*** See, for example, “Airbus versus Boeing revisited: international competition in the aircraft market” by Douglas A. Irwin and  Nina Pavcnik, Journal of International Economics 64 (2004) 223– 245