VoxUkraine conducted a survey to find out the opinion of bankers on capital controls introduced at the end of 2014 – beginning of 2015. The main conclusion is that there is no unanimity among bankers about these restrictions. However, the number of responses is very limited, so results should be treated with caution.

At the beginning of 2015, when the conflict in the east of Ukraine escalated, Ukrainian currency, the Hryvnia, devalued sharply. On February 26th 2015, interbank exchange rate reached its historic trough of 30 UAH/USD (figure 1). To stem currency pressures and stabilize exchange rate, The National Bank of Ukraine (NBU) imposed a number of harsh capital controls and hiked its key rate by 16pp, to 30% p.a. This, along with disbursement of IMF tranche, helped to stabilize the situation. 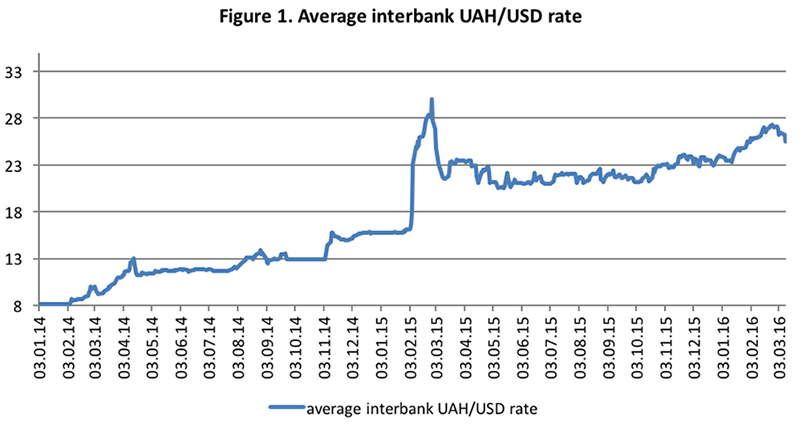 Severe capital and exchange controls had side effects – emergence of the “black” market and multiple exchange rates (figure 2). 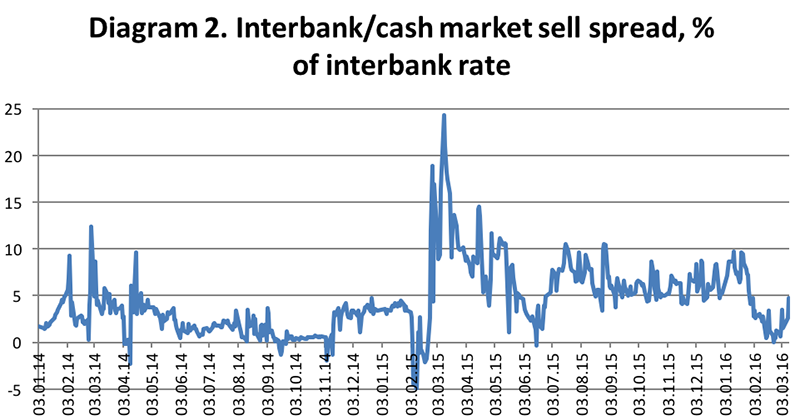 Data source: NBU. The figure shows by how much (in %) UAH/USD exchange rate at which cash USD could be bought from commercial banks differed from the interbank UAH/USD rate

The main currency market restrictions were introduced by two documents: a Decree on some currency operations (# 124 of 24.02.2015), and a Decree on money and FX market regulation (initially introduced on 03.03.2015 and since then reissued every three months or so).

The main restrictions introduced by these two documents are:

What do banks think about capital controls?

Although the bankers are rather careful in commenting the NBU actions, public perception of capital controls is rather negative (see, for example, here, here or here) [3]. However, this negative perception is based on some informal opinions, with little hard evidence.

VoxUkraine tried to fill this gap by conducting a survey of bankers to find out their opinion on capital controls. We approached 35 largest (by assets) Ukrainian banks and asked their top managers to anonymously fill in a short questionnaire. We received 15 responses – mostly from the largest banks. Smaller institutions mainly refused to comment.

The results of this survey are presented below.

According to most survey respondents, the capital controls and currency market restrictions did not have a large adverse impact on the operational cost of their banks. A majority of bankers believe that they forced their clients (mostly individual clients) into the “black” FX market. About half of the respondents indicate that they contributed to outflow of individual FX deposits.

Because of currency restrictions… 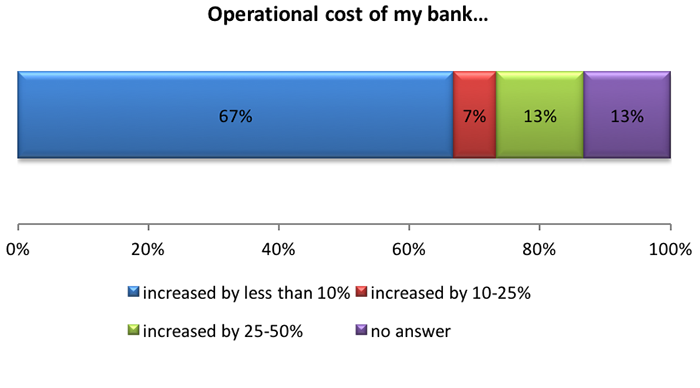 Note: in this question, several choices were possible

The majority of banks’ top managers report some instances when the National Bank refused to sell currency to their bank for no (in their opinion) good reason. Only one banker reported on instances of corruption on the side of NBU officials “on one or two occasions”, and another one reported having heard about this from clients.

We asked bankers to express their opinion on a few statements about possible consequences of cancelling capital controls. The bankers mostly agree that it would be good to have a clear plan for the lifting of currency restrictions (statement 1). Some note that they should be relaxed gradually. A majority of bankers agree or rather agree that lifting of capital controls now would lead to outflow of capital (statement 2) rather than attract investment (statement 3). However, three out of fifteen respondents agreed to both statements. Some bankers remarked that it’s not so much capital controls but rather the investment climate (including judicial system and property rights protection) that prevents capital inflow.

At the same time, most bankers agree or rather agree that currency restrictions initially introduced to stop capital flight now induce it (statement 4). 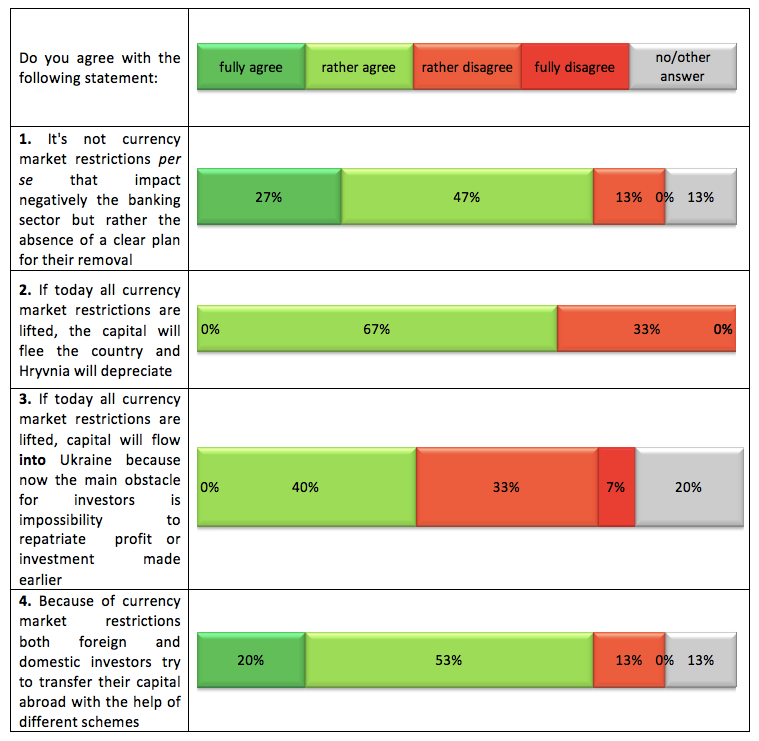 Finally, we asked the bankers to divide individual currency restrictions into three groups – those which are justified given the current state of the economy, those which bring more harm than good and those which are useless.

The mandatory sale of 75% of FX revenues is the restriction that is supported by the biggest share of bankers, with slightly more than half thinking this restriction is justified. Limits on withdrawal of cash from UAH and FX accounts find least support. The most controversial restriction is a ban on FX purchase for firms that have an FX deposit – almost equal numbers of respondents view it as justified and as useless. 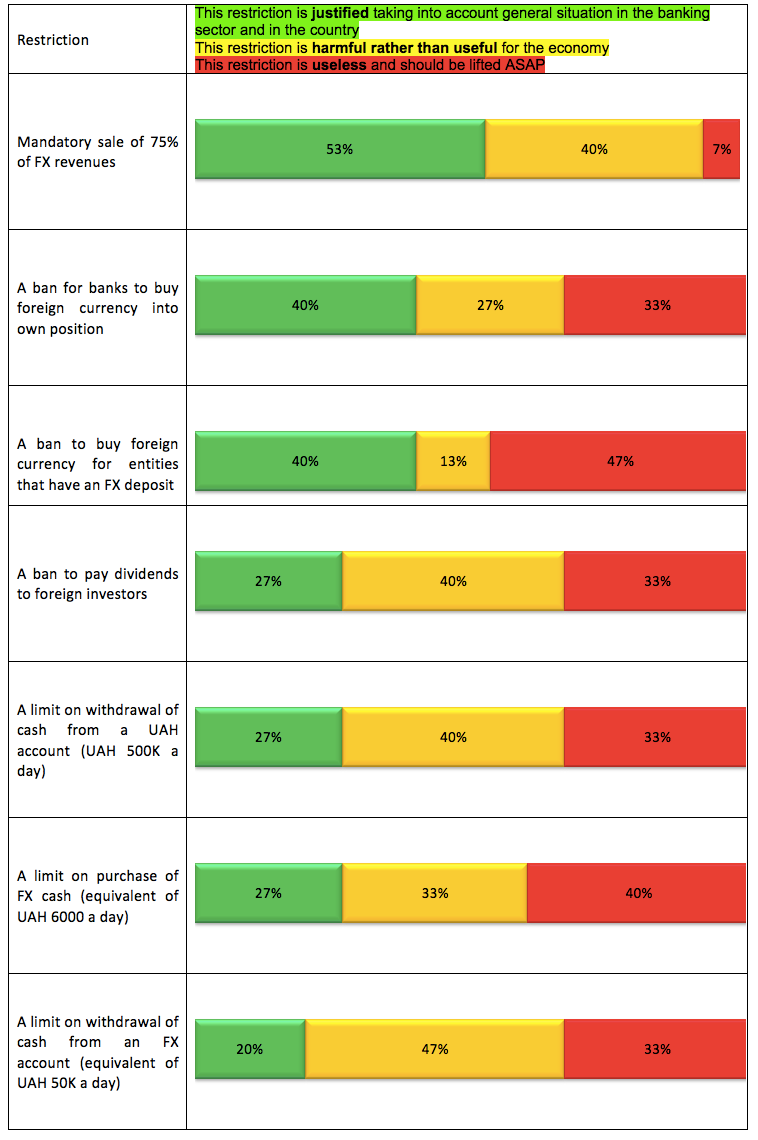 Our sample is very limited because the majority of approached bankers refused to participate in the survey, even anonymously. We therefore invite market participants to express their opinion on the issue.

Generally, there is no unanimity of bankers regarding capital controls and FX market restrictions. The majority of banks’ top managers view the 75% mandatory sale of FX revenues as justified and cash withdrawal limits as useless (note that these limits are gradually lifted by the NBU, on March 3rd 2016 the allowed amounts roughly doubled).

For the majority of respondents the introduction of capital controls led to relatively small increase in operational cost (however, note that mostly large banks answered, for smaller banks the relative cost increase may well have been higher).

The majority of bankers indicate that the NBU at some occasions refused to sell currency to them, even though according to the bankers there was no good reason for such refusal. However, there is only one respondent who suspects corruption was involved in some cases.

Bankers mostly agree that capital controls contribute to capital outflow and withdrawal of deposits. The majority of them also think that under current investment climate lifting capital controls may intensify outflow rather than spur capital inflow.

[1] We need to note that this restriction is not new to Ukrainian firms. Since mid-1990s until 2005 they were obliged to sell 50% of FX revenues; in November 2012 this requirement was introduced again, and in August-September 2014 firms had to sell 100% of FX revenues.

[2] Since September 2015, all repatriation of dividends is forbidden.

[3] The NBU is not happy with capital controls either and expects to cancel them when other state institutions start to function properly.