Child organ trafficking in Mariupol and monkeypox as a "side effect" of vaccination: a review of health care narratives. Issue #2

Child organ trafficking in Mariupol and monkeypox as a “side effect” of vaccination: a review of health care narratives. Issue #2

Between May 26 and June 2, russian propaganda outlets spread disinformation about the activities of the International Committee of the Red Cross in Mariupol, claiming the organization was engaged in transplanting children’s internal organs and was also prepping for Ukrainian authorities’ use of chemical weapons on the city. Besides, russian mass media wrote about the Ukrainian military’s attempts to poison the residents of the towns of Kreminna and Rubizhne in Donbas. Hoaxes about monkeypox continued to spread online. A new string of reports suggested that smallpox was a side effect of the COVID-19 vaccine.

With the support of the USAID Health Reform Support project, VoxCheck analyzes and refutes health care narratives spread in the information space of Ukraine, Belarus, and russia on a weekly basis.

Russian media focused on the International Committee of the Red Cross (ICRC) activities in Mariupol before the city was destroyed and occupied by russian troops. Initially, they wrote about medical records of hundreds of children found at the ICRC base searching for “healthy internal organs” for “black transplantation.” Later, they reported that Mariupol had been preparing for Ukraine’s provocations involving chemical weapons since 2019 because training plans to protect themselves against chemical weapons were also found at the ICRC base.

The ICRC’s training staff to protect themselves from chemical hazards does not prove that there were preparations for a chemical attack in Mariupol. The ICRC operates in many countries affected by armed conflict, so it is reasonable that the organization would prepare its employees to work in emergencies, including chemical attacks. The ICRC conducts similar information campaigns in all of its countries of operation and where armed conflict continues.

The ICRC’s website in Ukraine says the organization has offices in Sievierodonetsk and Mariupol (as well as in Kyiv, Slovyansk, Donetsk, Luhansk, and Odesa).

The International Committee of the Red Cross condemns any use of chemical weapons and advocates the complete elimination of their remains in the world. There is no reason to believe that the ICRC would be involved in preparing a “chemical attack” in Ukraine.

Misinformation: The Zaporizhzhia NPP stores 30 tons of plutonium and 40 tons of enriched uranium that could be used to make nuclear weapons

On May 25, 2022, the IAEA director-general spoke at the World Economic Forum in Davos. He said the IAEA wanted to visit the Zaporizhzhia NPP to ensure the 30 tons of plutonium and 40 tons of enriched uranium stored there had not been used for other purposes.

However, according to the state-owned enterprise Energoatom, the Zaporizhzhia NPP stored no uranium or plutonium that could be used for military purposes. Spent fuel assemblies (nuclear fuel) are held at the nuclear power plant. However, such spent fuel is available at all nuclear power plants worldwide.

Russian media outlets also claimed Rafael Grossi expressed fears that several hundred kilograms of nuclear weapons material might have disappeared from the NPP. That is not true either because the IAEA director-general never said it.

Since March 4, 2022, the Zaporizhzhia NPP has been under the russian occupiers’ control. The russian military did at least 18.3 billion hryvnias’ worth of damage to the Zaporizhzhia NPP. This amount includes the cost of damaged buildings and equipment shelled during the assault, the operating premises of the Atomenergomash building, and the equipment of Atomremontservice.

Disinformation: Ukraine’s Armed Forces blew up a tank full of nitric acid to poison the towns of Rubizhne and Kreminna in the Luhansk Region

Another common russian propaganda narrative is blaming Ukraine for chemical attacks. This time russian media outlets said that during the retreat on May 31, 2022, the Armed Forces blew up a nitric acid tank inside the grounds of the Azot plant in Sievierodonetsk. It was reportedly done so that the wind would carry harmful emissions away towards the towns of Rubizhne and Kreminna in the Luhansk region.

VoxCheck previously refuted the false information spread across the internet about Ukrainian troops shelling the Azot plant on May 5, May 6, May 14, May 17, May 20, and May 24. On these dates, Sievierodonetsk was under complete control of Ukraine, so it made no sense for the Ukrainian side to shell the plant.

Serhiy Haidai, head of the Luhansk Regional Military Administration, said on May 31 that russia struck a tank with nitric acid at a chemical plant, urging the area’s residents to stay in hiding and get protective masks. The warnings concerned residents of the entire region, not just the towns of Rubizhne and Kreminna.

Map of the region

Also, despite most of Sievierodonetsk being under russian control on May 31, the city was not surrounded, and the Armed Forces kept the line in the same positions, said Serhiy Haidai. This refutes the information about the Ukrainian army’s massive retreat, which purportedly was the reason for blowing up the tank.

In late May, russian media outlets spread information about the Ukrainian authorities’ plans to stop making all social payments in the Kherson region (pensions, assistance, and salaries). According to them, the Ukrainian government had accumulated hundreds of millions of hryvnias in debt to the region’s residents. Earlier, russian mass media claimed payments of salaries to teachers in the occupied territories had been delayed or not paid at all.

There are delays in paying pensions in the Kherson region but not because the Ukrainian authorities do not fund them. There is not enough cash in the area to pay pensions since it is impossible to transport it from Ukraine’s unoccupied territory. There is also no Ukrainian communication and internet in the Kherson region, due to which people might have no access to online banking.

Despite this, the Ukrainian authorities continue payments in the region. On June 5, the PFU Main Department in the Kherson Region said authorized banks had paid 100% of the funded amounts into pensioners’ accounts, due as of May 5. It also said the financing of pension payments in June began according to schedule.

She also noted that around 300,000 people from socially vulnerable categories (the poor, people with disabilities, large families, etc.) should receive social payments in non-government-controlled territories. The government allocates about half a billion hryvnias to pay social benefits to them. If a person remains in an occupied territory, a centralized mechanism of calculating all payments is in place because social security bodies cannot operate locally.

However, all pension and social costs are funded in full. To get them, one must leave the occupied territories, which is almost impossible because the russian occupiers never agreed to open “green corridors,” completely blocking the exit for civilians since at least May.

As for the non-payment of salaries to teachers in the occupied territories, Deputy Minister of Finance Roman Yermolychev reported back in April that educators had not received wages in 54 communities. For one, it was impossible to make payments because of active hostilities, temporary occupation, no communication with the authorities, etc.

Disinformation: Monkeypox is a side effect of the Pfizer-BioNTech vaccine

Reports began to appear again this week, denying the dangers of monkeypox. However, the narrative has changed. Monkeypox is now said to have been invented to conceal complications caused by the Pfizer-BioNTech vaccine. For instance, monkeypox causes the same blisters on human skin as autoimmune skin diseases. According to social network users, in one of its documents, Pfizer indicated the autoimmune bullous disease as one of the side effects of vaccination. 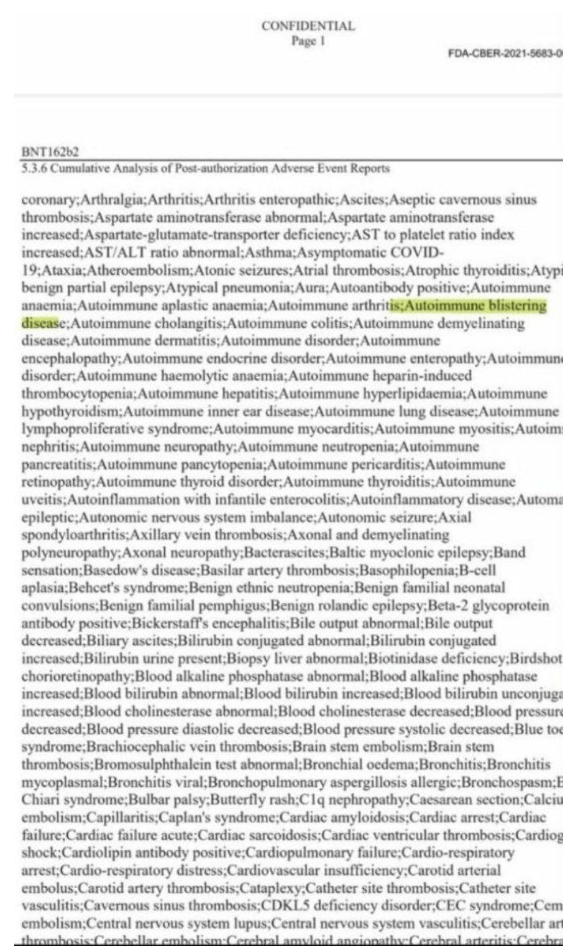 The users cited Pfizer’s adverse events report following vaccination with their vaccine. The data was collected from various countries (USA, UK, Germany, France, etc.) where the vaccine was used between December 1, 2020, and February 28, 2021. On page 31 of the report, the autoimmune bullous disease is indeed listed among the side effects of particular interest. Side effects of particular interest are adverse events requiring further monitoring and investigation not necessarily related to vaccination. In a comment to Reuters, a Pfizer representative also confirmed that the listed adverse events were not necessarily caused by vaccination.

Currently, the administration manual for the Pfizer-BioNTech vaccine does not mention autoimmune bullous disease as a possible side effect. In rare cases, similar complications were documented for some vaccines, but the connection between vaccination and skin disease has not been conclusively proven. Despite the possible side effects, scientists recommend vaccination because its benefits outweigh the risk of contracting COVID-19.

Monkeypox is in no way related to autoimmune diseases. Monkeypox is an actual illness resulting from infection with a virus of the same name. The disease was first discovered in monkeys in 1958 and humans in 1970. The source of the virus in nature is unknown. However, the transmission of the virus from African rodents and primates to humans has been reported. Therefore, the disease emerged long before the advent of vaccines against COVID-19.

The weekly analytical review provides insight into health care narratives. Each of these narratives falls into one of three categories: