"Delivering” Laborers And Moving Timber To The EU. Pro-Russian Media Manipulations In The Week Of October 11-17

“Delivering” Laborers And Moving Timber To The EU. Pro-Russian Media Manipulations In The Week Of October 11-17

This week, the pro-Russian media focused on the EU-Ukraine Summit, at which, among other things, an open skies agreement was adopted. They made the outcomes of the negotiations sound like the association is only beneficial to the EU, while Ukraine is just a loser, mainly in terms of the economy. Pro-Russian media actively disseminated the Kremlin’s fake news story about Ukraine’s “worn-out” gas pipelines that “could bust altogether”. They also kept justifying Russia, arguing that no one recognized it to be an aggressor and that the war was “made-up”.

VoxCheck analyzes how Russian narratives get into Ukraine’s information space, as part of a joint project with the Center for Strategic Communications. Read the previous issues here.

Manipulation: “moving out timber”, “delivering laborers” – Ukraine gained nothing from the Summit with the EU

What happened: The 23rd European Union-Ukraine summit took place on October 12 in Kyiv. A key achievement of this year’s summit is that Ukraine and the EU signed the Common Aviation Area agreement (the so-called “open skies” agreement). Ukrainian airlines can now fly without any restrictions to airports in the European Union and European companies to airports in Ukraine. Ukraine is committed to adhering to European security standards.

Some Ukrainian airlines, however, believe that the deal will harm domestic carriers. “Open skies” provide an opportunity for European airlines to operate domestic flights in Ukraine, while Ukrainian carriers in Europe do not obtain such a right.

Yet the pro-Russian media found another “betrayal” within the “open skies” agreement: the European low-cost carriers will now “deliver” even more Ukrainian laborers abroad. It is argued that the EU concluded another agreement that is only beneficial to itself, making it even easier for them to export cheap labor. 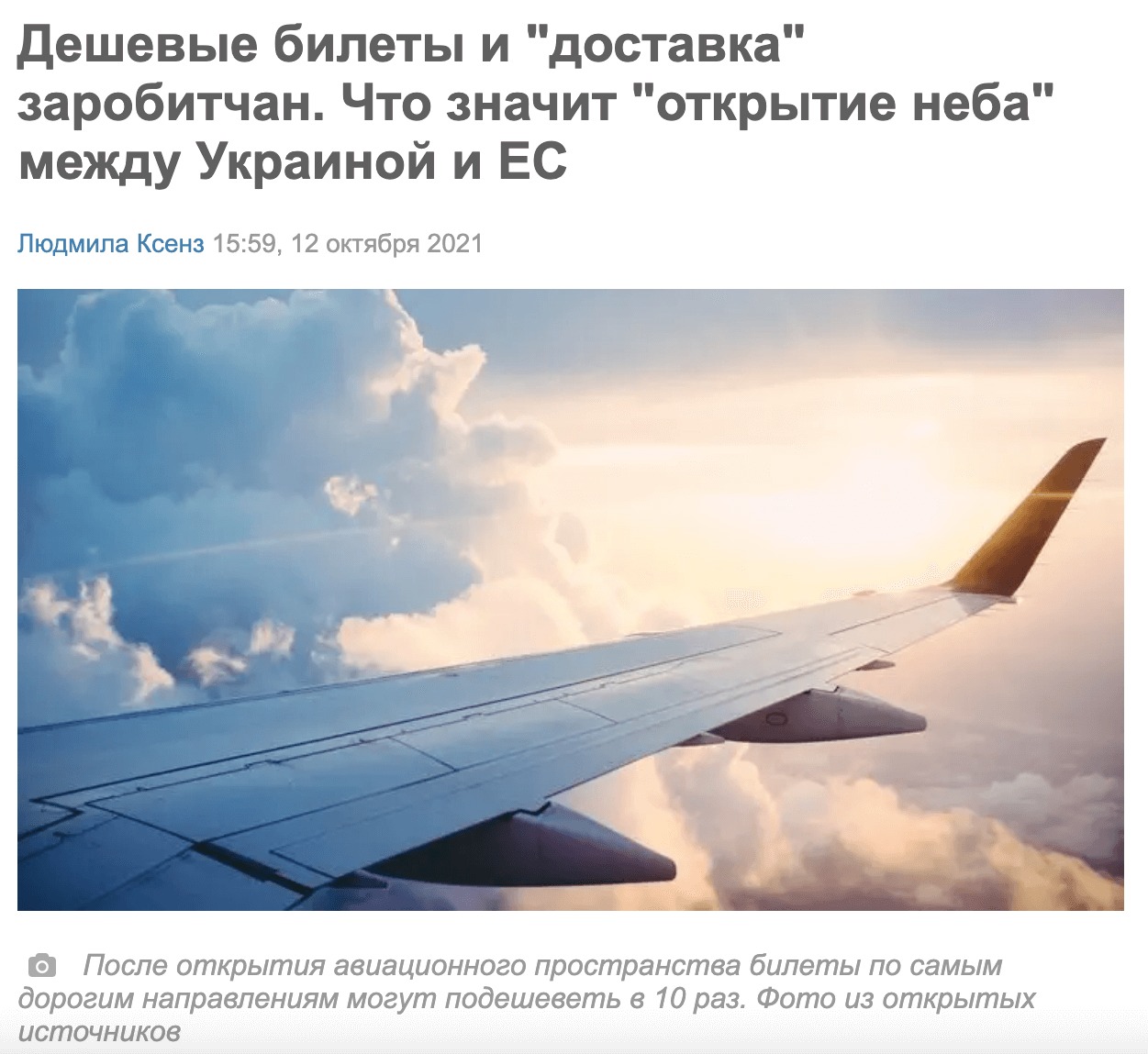 Translation: Cheaper tickets and “delivery” of laborers. What is the “opening of skies” between Ukraine and the EU about?

*Upon opening the airspace, the tickets for the most expensive destinations could cost ten times less.

Similar ideas are embedded in the overall Russian narrative saying that only the European Union benefits from the association with Ukraine. It is argued that the EU uses cheap labor, exports raw materials and resources from Ukraine, and exercises control over the authorities. Instead, Ukraine only loses from this Agreement ruining its economy. “Following an endless series of crises caused by “effective management” and “European reforms”, Ukrainian industries have long been on their last legs,” Klymenko Time writes.

We debunked the fake news stories of Russian propaganda about Ukraine’s association with the EU in the article Away from the EU. For seven years now, Russia’s disinformation has been demonizing the EU-Ukraine Association Agreement.

“Predictably, the European Union wrote in this statement only what’s necessary to serve the interests of the EU. Like a continuation of judicial reform and its deepening, that is, getting Ukrainian courts under total control. This statement also emphasizes the independence of anti-corruption structures. Well, of course, to keep them under the control of the West,” says a Strana video blog. We have already debunked the narrative of Ukraine’s being under external governance and foreign control.

The myth of moving resources out of Ukraine also got mentioned in the pro-Russian media. According to them, the EU demands that the moratorium on roundwood exports be lifted because it is contrary to the terms of the Association Agreement. In this year’s statement, Ukraine has finally pledged to resolve the issue of roundwood.

“Are European officials really interested in our problems? Or have they come for something else instead: energy, roundwood, land and other totally mundane stuff?”, a host at the First Independent TV channel wonders on air. He goes on to say that the current Ukrainian government is to the EU’s liking “because of its complete commitment to giving away everything there is in the country for the sake of the European Union’s interests, including economic ones”.

The demand to lift the moratorium on exports of roundwood has for years been the subject of numerous manipulations. It is argued that after the moratorium is lifted, the forests will be chopped down and taken away, with no raw materials left for Ukrainian producers. In reality, to preserve Ukraine’s forests, the EU proposes to constrain extraction. The current moratorium on the export of timber has not stopped extraction, while domestic production of finished products made from our own raw materials has been developing slowly. 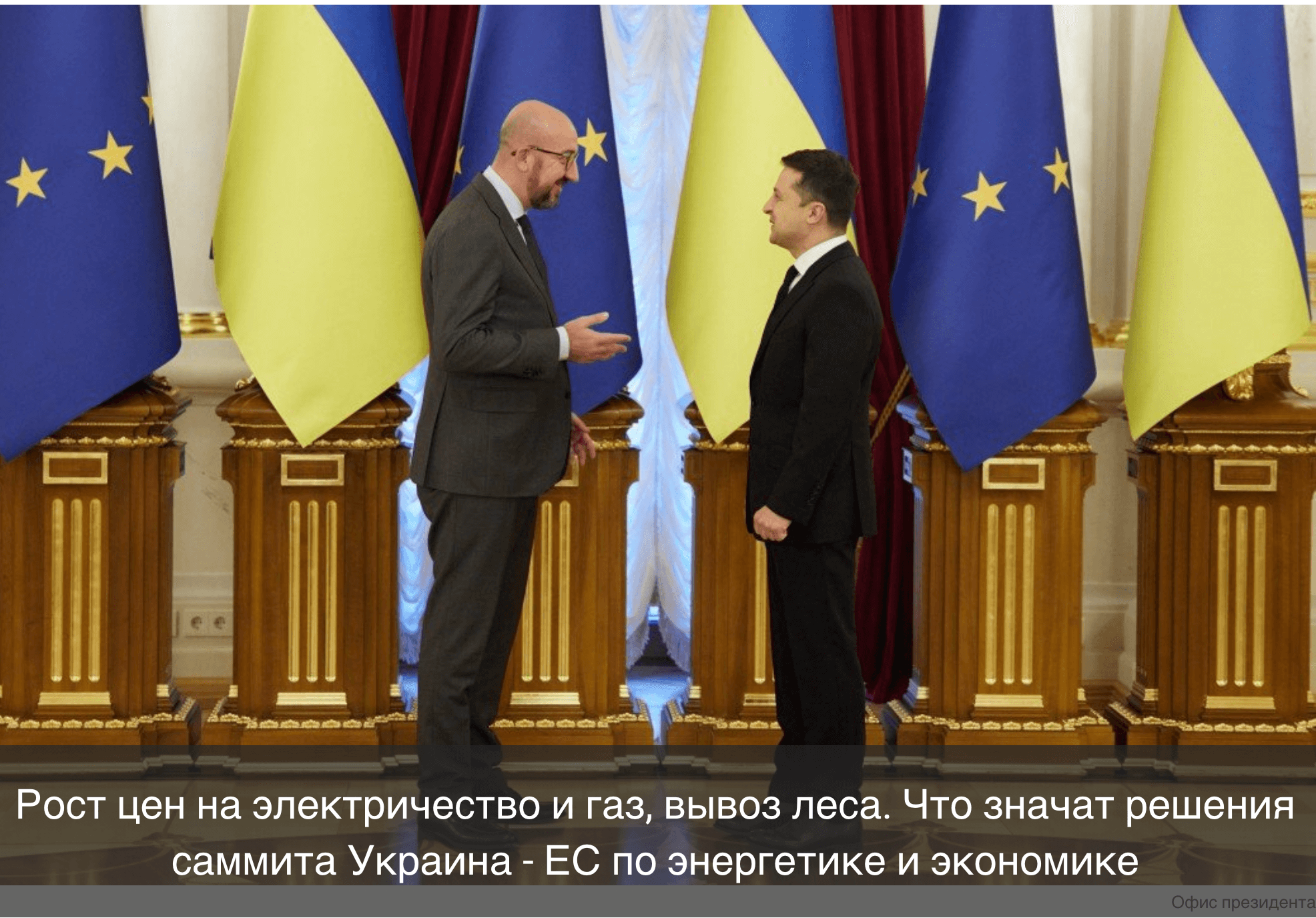 What happened: Vladimir Putin said that it is dangerous to increase gas transportation through Ukraine because the Ukrainian gas transmission system (GTS) is worn out and could “bust altogether”. Pro-Russian media re-broadcast the Kremlin’s position promoting the message that this is why Russia refused to transport gas through Ukraine. Pro-Russian TV channels cited Putin as saying that the Ukrainian GTS has not been repaired for decades, making it dangerous to increase gas supplies.

Increased gas and electricity prices, moving out timber. So what are the EU-Ukraine Summit’s decisions on energy and economy about?

Just recently, Russia’s President Vladimir Putin said that gas supplies will continue through our country, but they will exceed the contractual obligations by 10%, tops. And that is not because the Kremlin wants to do us a bad turn but because the Ukrainian pipeline is not fitted for high pressures.

At any rate, it is definitely not about the state of the GTS. Recently, the RF president explained why using the Ukrainian pipelines is less beneficial than transporting gas via the new pipelines. Naturally, Gazprom will not operate to its own detriment.

In reality, Russia deliberately undermines Ukraine’s capacity to justify its political manipulations, which have led to a large-scale gas crisis in Europe. In a comment for the Center for Strategic Communications, the Ministry of Energy of Ukraine said that a large-scale modernization program for the Ukrainian GTS is underway. In 2021, seven facilities have been put into operation, four facilities are completed waiting to be put into operation, with four more being under construction. There are plans to refurbish eight compressor stations and nearly 200 gas distribution stations. In the first 8 months of this year alone, over UAH 4.6 billion worth of capital investments, repairs, maintenance and diagnostics were committed.

Instead, Russia had 7 large emergencies last year because, instead of repairing the existing “pipes”, the money goes to finance new “…streams” (including Nord Stream-2).

Besides, the pro-Russian media actively commented on Putin’s statement that it is unprofitable for Russia to transport gas through Ukraine. We debunked this manipulation in our monitoring report last week.

Fake news story: Russia is not an aggressor

This week, pro-Russian TV channels were busy propagating the narrative that Russia is not an aggressor state or party to the conflict, and that there is simply no war going on. “First, war has not been declared, but if there’s a war on, then declare it. Second, Russia is not a party to the conflict in accordance with the Minsk agreements,” Andriy Lesyk, a member of OPFL’s political council, said on-air on the First Independent.

On the same TV channel, Renat Kuzmin, an MP from OPFL, also argues that no one has declared war or declared Russia to be the aggressor state. “The Ukrainian government is not afraid of losing in this war, becoming a losing party, because there’s no war going on. There’s just the appearance of a war, used for political and corruption ends,” said Kuzmin.

It should be noted that such pro-Russian online media outlets as Strana and Klymenko Time usually put the term “aggressor country” in brackets in their publications or use it ironically.

Russia was recognized to be the aggressor state by the Verkhovna Rada in 2015: interestingly, the OPFL MPs of the current convocation were ignorant of this fact. Russia was recognized to be the aggressor in the Donbas conflict by 47 UN countries, not a “mediator”. Russia’s responsibility for the aggression in Donbas has been repeatedly emphasized by the EU. At this year’s Summit, the leaders of Ukraine and the EU affirmed that Russia is committing aggression and that it is responsible for the events in Donbas and violations of the truce. The pro-Russian media, however, repeat the Kremlin’s narrative trying to shift the responsibility for breaking the truce onto Ukraine.

The fact of Russian presence in Donbas was acknowledged by OSCE representatives. The OSCE mission recorded individuals with rank insignia of the Russian Federation in Donbas. In addition, the OSCE SMM representatives spoke with captives claiming to be members of the Russian Armed Forces. According to the information published on the website of the US Mission to the OSCE in January 2020, the OSCE recorded the transfer of military equipment from Russian territory to Ukraine.

The Bellingcat investigators have repeatedly emphasized the presence of Russian troops in eastern Ukraine. For instance, in 2014-2015, thousands of Russian servicemen took part in hostilities in eastern Ukraine and were awarded medals for their actions during these operations. Deputies of the State Duma of the Russian Federation do not deny Russia’s presence in Donbas, either. Russia’s participation in the war is regularly attested to by its participants, such as Russian officer Igor Girkin-Strelkov.

This week, the pro-Russian media also actively propagated Dmitry Medvedev’s article about Ukraine. Medvedev expressed his ideas in 5 short paragraphs, filled with the “evergreen” myths of Russian disinformation. The pro-Russian media disseminated these myths without debunking them, with talk show participants trying to supplement them by talking, once again, about “external governance” of Ukraine and saying that everything is decided for Zelensky in Washington.

We debunked this Russian politician’s propaganda points in detail in our article ”5 paragraphs of lies of Dmitry Medvedev”. 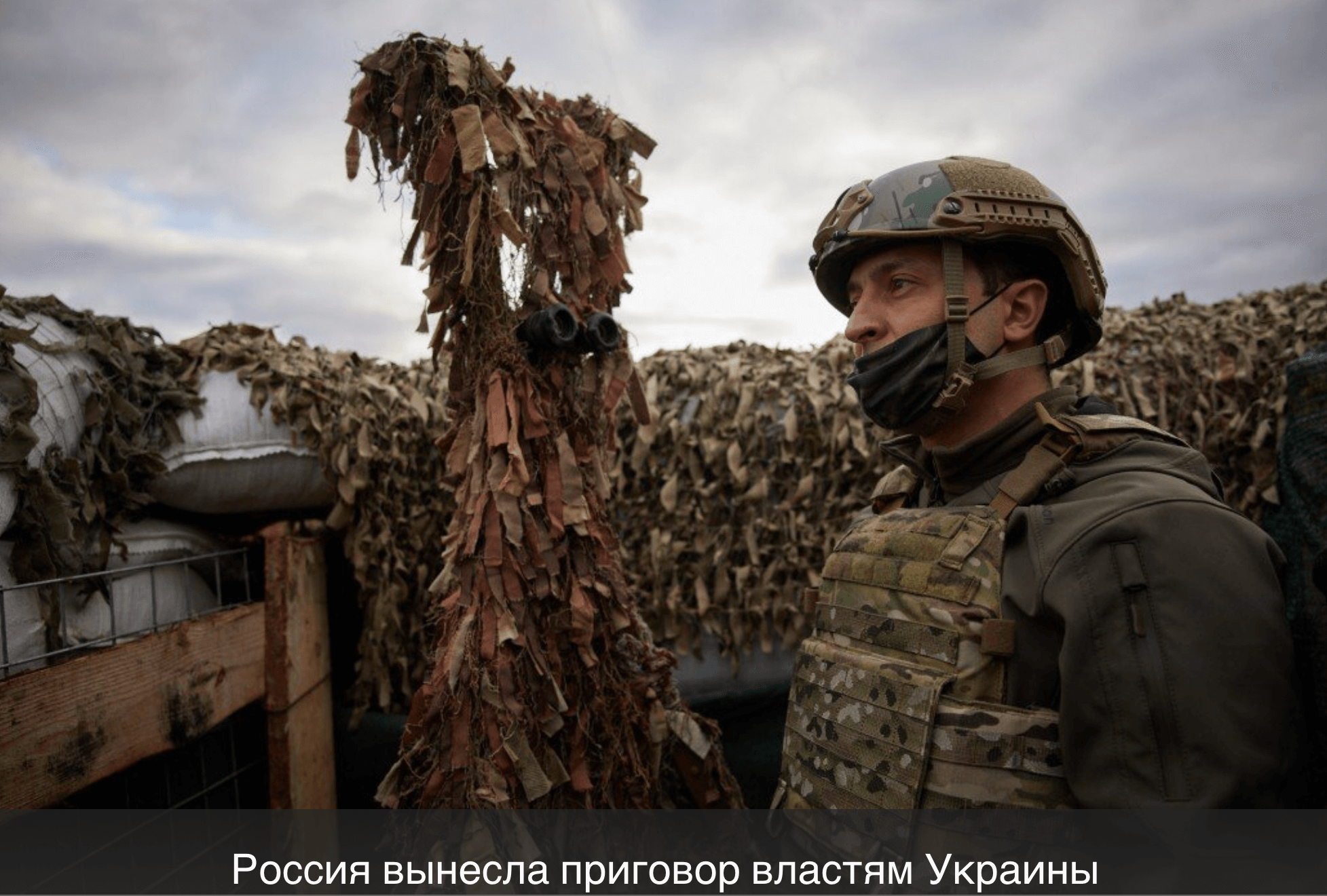 Screenshot:  Ukraine 112 (the piece was reprinted from the Russian site “Vzglyad”)

VoxCheck analysts monitor daily the websites and social networks of Ukrainian pro-Russian media to identify the main news or topics of the week that get the most airtime and attention in the news feed. We identify key narratives for the past week and analyze their origins.

VoxCheck searches for fake news and manipulations to debunk them. The “click and check” method lies at the base of our fact-checking. Everyone can check our argumentation and sources. Fact-checking can only be based on open data with relevant links. A fact-checked article can only be published if signed by two members of the editorial board.