Demographic Transition and Monetary Policy in a Small Open Economy

Ageing will significantly affect economic growth, sustainability of the pension system, size and composition of fiscal expenditures etc. The authors focus on the effect of ageing on monetary policy, specifically, on the natural rate of interest (NRI).

Today developed and former transition countries go through a process of  demographic transition. Its speed and timing differs across countries but will be especially pronounced in Poland. Because of declining fertility and increasing life expectancy (diagram 1), old-age dependency ratio in the Polish economy may rise even four-fold until 2100 (diagram 2). 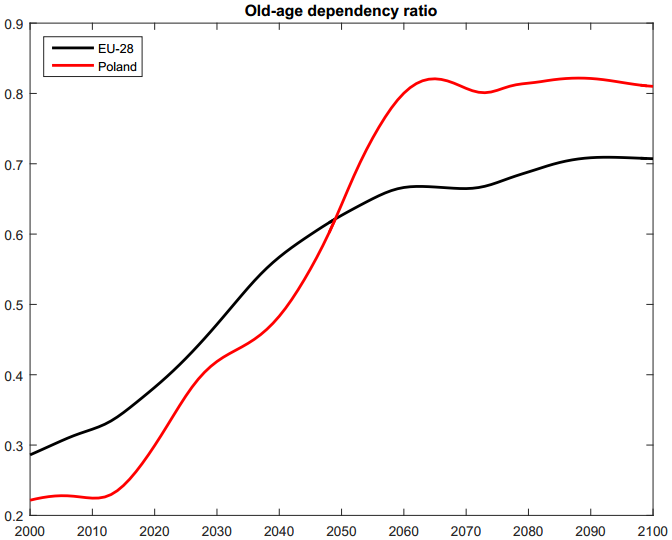 Ageing will significantly affect economic growth, sustainability of the pension system, size and composition of fiscal expenditures etc. But here we focus on the effect of ageing on monetary policy. Specifically, we estimate the effect of ageing on the natural rate of interest (NRI). While doing this, we take into account foreign demography, underline the importance of observing NRI in real time by a central bank and explore the quantitative implications of the zero lower bound (ZLB).

We develop a New Keynesian model of a small open economy with life-cycle features:

We introduce some rigidities into the model: sticky prices and investment adjustment costs. We assume that, unless constrained by the ZLB, monetary policy is guided by a Taylor-like rule.

To calibrate the model, we use parameter values from the literature or to match the data observed in Poland and the euro area. We feed Eurostat demographic projections into the model and run simulations.

Simulation results are shown in Diagram 3. We see that ageing will result in a considerable improvement in the net foreign assets position, a significant reduction in the real interest rate, and a reduction of per capita working hours and GDP. 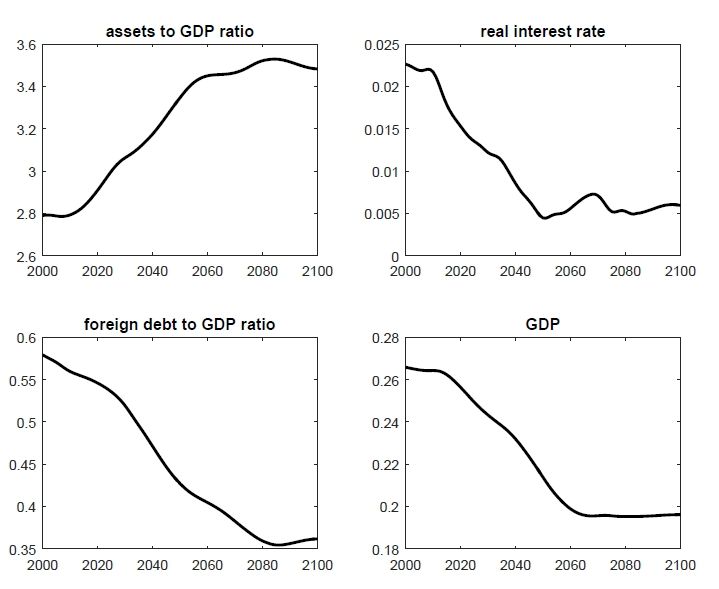 Our simulations show that ageing will lead to:

Demographic process abroad will not have a substantial impact on the pattern of NRI change in Poland, although if the demographic transition in other countries was equally sharp, the interest rate fall would be slightly deeper. Hence, it is by and large domestic demography that matters for the evolution of NRI.

It is very important to account for the NRI fall in real time to implement the right monetary policy. For example, if we believe that NRI is 4% while in reality it is 2%, the central bank will keep interest rates too high on average and will be implementing too restrictive monetary policy. Another consequence of lowering the NRI is that central banks become more likely to hit the zero lower bound and thus lose one of their main instruments of monetary policy (because you can keep nominal interest rates negative only for a very short period of time, if at all).