However, a conflict has two sides and affects opposite sides in different ways, since the losses for one country may translate into gains for the other.

The Russian-Ukranian conflict severely impacted both countries economically. Ukrainian local currency devalued against the US dollar by 50 % in 2014 and by another 37 % in 2015. GDP per capita dropped by 1.1 % in 2014 and by 9.5 % in 2015 (Figure 1). Russia also experienced a negative economic shock bringing its economic growth into negative numbers for the first time since the 2008 financial crisis: -1% in 2014 and -3% in 2015. Additionally, the Russian rouble was devalued by almost 50 % and inflation increased to 15.5% in 2015. While this adverse dynamic is not solely the result of the conflict, it definitely played a major role.

At the same time the two conflicting countries showed opposite trends in how Russians and Ukrainians evaluated their happiness. According to the World Happiness Report Ukraine lost 44 positions in the overall country happiness rankings during the conflict (from 87th place in 2010-2012 to 132nd place in 2014-2016), while Russia jumped from 68th place to 49th during the same period [1,2].

How to explain such contradictory trends? Does it mean that the war with Ukraine made Russians happier? Osiichuk and Shepotylo in [3] tried to find answers to these questions evaluating the contemporary impact of war on populations’ well-being on both sides of the border. 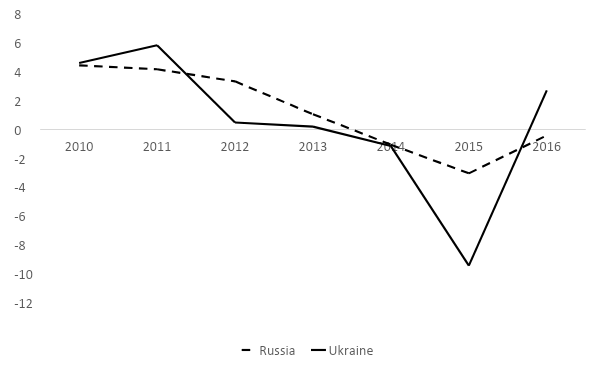 Speaking about well-being, which often is used as a synonym for happiness and life satisfaction, it is important to understand that this is a multi-dimensional concept: peoples’ overall life satisfaction is affected by many aspects, such as their health, employment, or material resources [4]. It is also important to take into consideration which components are most important for the population of a certain country. Surveys [5] showed that health and financial well-being  are the most valued components of the overall well-being for both Russians and Ukrainians.

Analysing  these components presented in Figure 2 authors found that the Russian-Ukrainian hybrid war affected people in both countries. Whilst for Russians the negative effect was seen only during the first year of the conflict, for Ukrainians it was present for all three years since 2014. The conflict significantly worsened the financial well-being of people. This impact is inversely related to the distance from the conflict zone (those who lived closer to the conflict zone were affected stronger). Mental health was negatively impacted in both countries at the earlier stages of the conflict. However, in Russia this effect is significant only in the region bordering the conflict zone, while in Ukraine it is significant in the regions farther away from it. Research also indicates an increase in chronic diseases in Ukraine over a longer time.

Effect of conflict on financial well-being in Ukraine

The effect of the conflict on expectations about financial well-being (FWB) was much stronger for the whole population. In 2014, 70 percentage points more people reported that they had negative expectations about their future financial situation. Expectations bottomed out in 2015, but in 2016 people still negatively evaluated future FWB. However, expectations improved significantly for those who lived farther from the conflict zone. For example, people who live 700 kilometres away from Donetsk were 37 % more likely to evaluate their future financial well-being positively.

Among the most  affected groups of population were people with secondary education. It could be related to the fact that they have specialized skills that are not easily transferable to other places of work and other types of occupations, making this group less mobile than people with higher levels of education. The 26-45 group was the least affected financially, perhaps due to their higher mobility and greater flexibility to adjust to the negative effect of the conflict.

Younger population (16-25 years) found more difficulties in making ends meet. Authors conjectured that the reason for that was lack of the state support for this group. Older population received a higher share of social security benefits, especially in the form  of state pensions. Relatively older people of working age were also hit hard. Almost all age groups had low expectations about their financial future. The 26-45 group was the most optimistic about their future financial situation.

Effect of conflict on financial well-being in Russia

Financial well-being of Russian population deteriorated during the conflict, but not as severely as in Ukraine – there was a 20-21 percentage points reduction in expected FWB after the start of the conflict as opposed to 54-60 percentage points in Ukraine. Similar to the Ukrainian sample, the expected FWB of the population from regions closer to Donetsk experienced a larger and more significant decline. However, there was no effect of the conflict on real income or ability to make ends meet.

Due to Russia’s large size and the denial of the Russian government about direct involvement in the conflict, it is not surprising that the impact of the conflict on the well-being of the Russian population was less strong. However, the population of the Rostov region in Russia, which borders  both Donetsk and Luhansk regions, experienced a noticeable deterioration in well-being. During the period of heavy fighting, it was reported that some villages in the Rostov region were hit by artillery shells and at least one person died. Moreover, civilians in the Rostov region observed intensive movements of military troops and equipment. Finally, migration flows and cross-border human traffic between Russia and the so-called Donetsk and Lugansk People’s Republics significantly increased during the conflict. Therefore, it is reasonable to assume that the conflict had a stronger impact on the Rostov region population. However, the picture is rather mixed.  Since the conflict started, the population of Rostov region were 9% more likely to be dissatisfied with current FWB, while there was no statistically significant effect on current FWB for the whole of Russia. On the other hand, residents of Rostov were only 16% more likely to have negative expectations about FWB, which was slightly less than the average decline for the whole of Russia. Even more importantly, during the conflict the population of Rostov experienced a 7.2 %  smaller reduction in real income relative to the populations in other regions of Russia. This may reflect an increase in public spending channelled to the region due to increased military spending and improvements in the infrastructure necessary to host military troops and equipment that were concentrated at the border with Ukraine.

Effect of conflict on health in Russia and Ukraine

To measure the impact of the conflict on health authors investigated components of physical health (chronic disease) and mental health (stress symptoms). Conflict’s effect on these components is subject to different mechanisms, timing, and duration. The effect on physical health may develop later, but with longer and more severe effects, leading to disabilities and chronic diseases [5]. Conversely, the effect on mental health is more acute in the short-run, but the longer the conflict continues, the more likely it is that people will adjust to their new situation [6].

The impact of the conflict on health gives a rather mixed and nuanced picture. Mental health is negatively impacted in both countries at the earlier stages of the conflict. However, in Russia this effect is significant only in the region that borders the conflict zone, while in Ukraine the population (mostly males) living farther away from the conflict reported feeling more stressed. The stress symptoms most strongly increased in 2014, which was the period of the heaviest fighting and uncertainty. By 2016, when the phase of heavy fighting was over, their significant impact on the remote areas reduced. Authors assume that it may be related to the negative correlation between the proportion of ethnic Russians in the population and to the distance from Donbas – a high proportion of the population living close to the conflict region may have welcomed the secession of the Crimea and the rising Russian influence, whereas people from the more remote regions were strongly against it. Second, this may occur because the population of the Western regions of Ukraine took a more active part in the protest movements and had more negative attitudes towards Russian involvement in the conflict due to a lower proportion of ethnic Russians in the population. Additionally, there was a higher probability of being drafted to the military in Western Ukraine, which caused widespread protests by residents in the Western regions in 2014 and 2015.

The research reveals that the Russia-Ukrainian conflict has impact on  both sides, but the effect is more severe for Ukraine, because the active fighting occurred on its territory, while Russian government denied its direct involvement. Conflict has a large negative impact on the well-being of civilians, which is felt stronger for those living closer to the conflict zone. It influences different components of well-being with different degrees of severity, timing and duration. There is an immediate effect on mental health and the ability to make ends meet. However, there is a longer lasting and potentially more severe effect on physical health and expectations about the future, which is important for long-run development.  Therefore, the management of expectations and a reduction in uncertainty through timely, transparent, and trustworthy information should be a government priority during a conflict. The delayed negative response of the population’s physical health to the conflict highlights that the government should develop a programme of preventive actions, which would help to tackle these problems early on and prevent the long run effect of conflict on health.