Dual-Track for Ukraine: How to Fight Corruption | VoxUkraine

Dual-Track for Ukraine: How to Fight Corruption

The dual-track approach offers a deal to the incumbents: we do not take away all your rents in the near future but in exchange you do not block reforms and the growth of new institutions. In this post, we focus on corruption, another crucial problem for Ukraine. How can one resolve these challenges using the dual-track approach?

As we discussed in the previous post, the dual-track approach is a policy method aimed to minimize resistance to reforms and thus to maximize the probability of success when reactionary forces are strong. In a nutshell, the dual-track approach offers a deal to the incumbents: we do not take away all your rents in the near future but in exchange, you do not block reforms and the growth of new institutions. Since the incumbents have much less to lose in this case, they will not fight changes as fiercely as they could otherwise, provided the promise is credible. However, the new institutions—presumably efficient and non-corrupt—eventually overtake the old institutions and the rents vanish over time. In the previous post, we illustrated how the dual-track approach can be used to abate public displeasure to necessary increases in energy prices through the introduction of market prices at the margin—a big issue in Ukraine. In this post, we focus on corruption, another crucial problem for Ukraine.

One can identify several areas where corruption is particularly dangerous:

Second, Ukraine’s Prime Minister Yatsenyuk observed in early 2014 that 40% of $25 billion in annual public procurement “… stays in the corrupt pockets of the people who carry out these purchases.” According to Business Environment and Enterprise Performance Survey, stunning 99% of firms expect to pay bribes to secure a government contract.

Third, the vast majority of judges operated or were appointed during the infamously corrupt regime of Viktor Yanukovych and thus one may doubt the impartiality, independence and honesty of the courts. According to World Values Survey, 75% of Ukrainians do not trust courts. Indeed, recent rulings block important initiative of the government to fight corruption. For example, a court in Dnipropetrovsk ordered the Ministry of Infrastructure to stop its open, merit-based search for a new head of Ukrzaliznytsya, the state-owned railroad monopoly, because one of the applicants—apparently affiliated with an oligarch—claimed to be unfairly excluded from the short list. 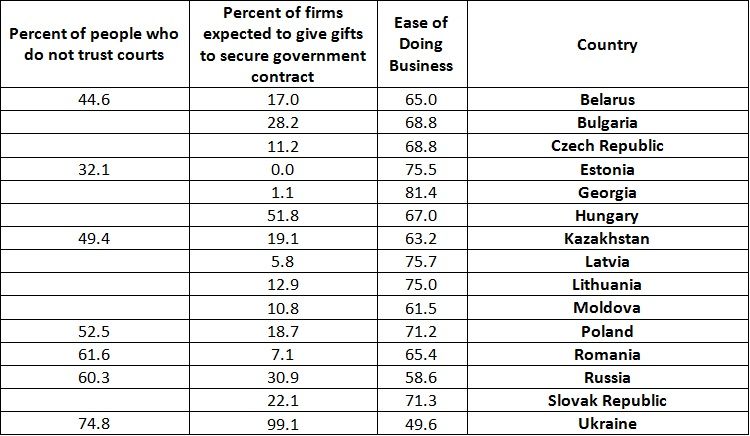 How can one resolve these challenges using the dual-track approach?

Licensing and regulation: the dual-track may be implemented by allowing new applicants to use alternative forms of certification and licensing. For example, Georgia under Saakashvili allowed businesses to bypass national regulations if a firm can obtain certification from regulators in the EU or the US or from a credible international agency. Another option is to allow businesses to obtain permits from a regulatory office of their choice. In other words, if a firm is registered in Kyiv, the firm can apply for a permit in Lviv. While some regulations are necessarily local, many are rather generic and thus there is scope for undermining the monopoly power of incumbent corrupt bureaucrats without actually removing them from office.

Public procurement: the government can outsource its some (or all) procurement to the private sector. For example, the government can appoint a private firm—e.g., PWC, KPMG, Deloitte, EY—to run the procurement for a fixed fee and a percentage of money from securing a contract below a reservation price so that the firm has incentives to award a contract to a contender offering the lowest price. Of course, there is a certain risk that a firm running the procurement can get kickbacks but, given the international reputation at stake and relatively small volume of transactions in Ukraine, the cost of being caught could far outweigh the benefits of kickbacks. Again, since the old methods of public procurement will continue to exist, the incumbents may be less energetic in protecting their turf. However, once the new system of procurement is well established and running, the old one can be phased out.

Corrupt courts: Solving judicial problems is particularly difficult because the balance between preserving independence of courts and instilling impartial justice into a corrupt system is delicate. Furthermore, radical changes (e.g., disbanding all courts and creating a new system of courts) can be too disruptive. The dual-track offers a simple solution. The government can keep courts at the lowest level as is (and thus preserve the rents for rank-and-file judges) and create a new level (“appellate”) courts that can be staffed by lawyers and judges with impeccable reputation. Since the focus is only at a higher level and hence the number of vacancies could be relatively small, staffing can be accomplished relatively quickly. This new appellate courts will replace by current system of regional courts of appeal by redrawing boundaries of the regions so that old counts will be dissolved and new courts will be created. The new system will keep the rulings at the lower level of courts in check and eventually the government can clean corruption out at all levels of the judicial hierarchy.

Another application of the dual-track approach to the judicial system could be to give parties the choice which court or which judge they want to use for resolution of their potential conflicts. This is likely to increase temporarily the burden on honest and credible judges but the advantage is that corrupt judges will lose a lot of power. Since the corrupt judges continue to be in the system, their opposition is reduced but businesses and households can bypass corrupt judges so that damage from unfair rulings is diminished. Indeed, many big businesses in Ukraine choose to settle their disputes in the U.K. or Sweden to ensure a fair trial. The suggested policy allows a similar shifting of court jurisdiction within a country by allowing ordinary Ukrainians to choose the court they want to use.

In summary, the dual-track can push reforms forward, reduce resistance of incumbents and be structured so as to increase support for reforms over time to ensure that the changes are actually implemented and not reversed at a later stage.