Ukraine is going to have a highly competitive parliamentary election in a week. Polls suggest that eight parties are going to make it. While some voters are dead set in their preferences, many voters are still uncertain about their choice. Indeed, there are many new faces in the political arena. If party programs provide any guide to how these parties are going to behave in the future, there is a broad spectrum of possibilities offered to voters.

We asked 13 economists from leading academic and policy institutions in Ukraine and abroad to evaluate the economics of each party’s program. Here is the ranking:

The programs were rated along four dimensions: specificity; feasibility and practicality; economic soundness; consistency and coherence. Each dimension is important. Specificity provides means to keep parties accountable, as it is hard to monitor progress on general promises (for example, improve the quality of life). Considering feasibility and practicality filters out promises that are dreamy (for example, catch up with the U.S. by year 2020) or that carry relatively low value for a typical person (for example, abolish taxes on dogs and other pets). Economic soundness measures a program’s consistency with the basic principles of economics and accounting (for example, government spending has to be roughly equal to government revenue). Consistency and coherence check for conflicting promises (for example, advocate for free markets and high regulation at the same time) and for various promises to complement each other (that is, a program has a logical chain and a natural connection between its parts).

Table 1 presents the economists’ average scores based on a 0-to-10 scale (0= worst, 10 = best) for each party and dimension. Strikingly, all scores except one are below a disappointing 6. Why are the scores so embarrassingly low? Take Specificity. The lowest score is “awarded” to Samopomich. The program of this party does not involve a single number or date. There is no numeric target or an objective criterion to evaluate progress and no deadline for when this program must be achieved. Unfortunately, this lack of specificity is common across all programs. For example, the Opposition bloc promises to stop the economic recession but fails to explain how this is going to be done. Even the most specific program (Civil Position) has only a handful of measurable, verifiable and timed targets (for example, achieve energy independence by 2020, reduce the size of police by 50%).

Scores for feasibility and practicality indicate that goals of many parties can hardly be achieved. For example, the KPU has the lowest score in this dimension because it promises free healthcare, education and housing for a large fraction of the population. Radical party, the other party with the lowest score, promises to raise spending on healthcare by a factor of ten, which would equal roughly 40% of GDP. Even the more mainstream parties tend to overpromise. For example, People’s Front pledges to raise Ukraine’s human development index (HDI) to top 20. Since the measures used for computing HDI change slowly and Ukraine currently holds the 83rd position in the world, making top 20 means that Ukraine must get ahead of countries such as Spain, Finland, and France. The program of the Civil Position gets the highest (yet far from perfect) score only because it is relatively conservative in its promises.

Economic soundness is the dimension with the lowest average score across parties. Such dismal result underscores that many political parties in Ukraine are blatantly populist, promising large government programs and low taxes, trying to control prices by regulation, subsidizing various sectors, and limiting free markets. The undisputed “champion” is the Communist party, which offers a heaven on earth with great limitations to private property, redistribution of wealth and income, and nationalization of key industries. The collapse of the Soviet economy is perhaps the best proof of how unsound such propositions are. The Radical party is a close second to the KPU because it also promises a radical (after all, the party is named Radical) redistribution of wealth, low-interest-rate loans to businesses (who’s going to issue these loans?), banning markets for land (how can this stimulate investment in agribusiness?), defaults on public debt (how is this consistent with expanding access to foreign markets?), etc. Opposition bloc is in solid third place from the bottom. One of the “gems” in this party’s program is a promise to return to a fixed exchange-rate system. For a country whose external trade is dominated by commodity prices, restoration of a fixed-exchange-rate system is like a kiss of death. And Ukraine has proved this point many times. Every 5-8 years Ukraine had a currency and/or banking crisis precisely because of the central bank’s determination to keep a fixed exchange rate. The highest scores were given to People’s Front, Civil Position and Samopomich. All three parties promote a liberal, free-market economic policy with relatively little government involvement. Interestingly, only two of the evaluated parties, People’s Front and Civil Position, do not promise to reduce taxes.

Considering consistency and coherence reveals that many parties do not have a clear ideology and thus various parts of their economic programs point to opposite directions. The Communist party is fairly consistent and coherent: it wants to build a centrally planned economy. While persistence is rewarded in this dimension, this persistence is going in the wrong direction. Some programs appear to have accounting errors. For example, Radical party promises to increase healthcare spending by a factor of ten. Since healthcare accounts for about 10 percent of the state budget, this means that the party may be unable to fund other government programs such as defense, education, and social security. Somewhat surprisingly, a few heavyweight parties have glaring inconsistencies in their agendas. For example, Batkivschina insists on building a market economy but denies markets for land.

When we average scores across dimensions, we observe three clusters. In the top cluster, People’s Front and Civil Position have the highest average scores. They send relatively clear and consistent messages. The second cluster (Batkivshina, Poroshenko bloc, Samopomich) has a significant gap relative to the first cluster. The parties in this cluster avoid making bizarre promises, but their programs lack specificity and could make unrealistic and/or conflicting promises. The third cluster (KPU, Radical Party, Opposition bloc) has dismal scores because their programs make confusing statements, wildly optimistic promises, or build their programs on premises that are not economically sustainable.

Perhaps the most striking conclusion from the analysis of party programs is that despite all these differences identified by experts, party programs are quite similar. Table 2 and Figure 1 show that if we use content analysis of party programs to identify priorities, the relative frequency of words associated with these priorities is highly correlated across parties. For example, the correlation between the Opposition bloc and the Poroshenko bloc is 0.57. At the same time, the program of the KPU is the least correlated with the programs of other parties. Such convergence and divergence are not entirely surprising as mainstream parties are fighting for the median voters while extreme parties differentiate themselves by saying radically different things.

The overall similarity across programs suggests that, holding everything else constant, votes are likely to be determined by the personalities of party leaders rather than by their programs and agendas. Such reliance on the personality factor could be dangerous. After all, members of the disgraced Party of Regions put all blame on Viktor Yanykovych who had concentrated power in his hands. 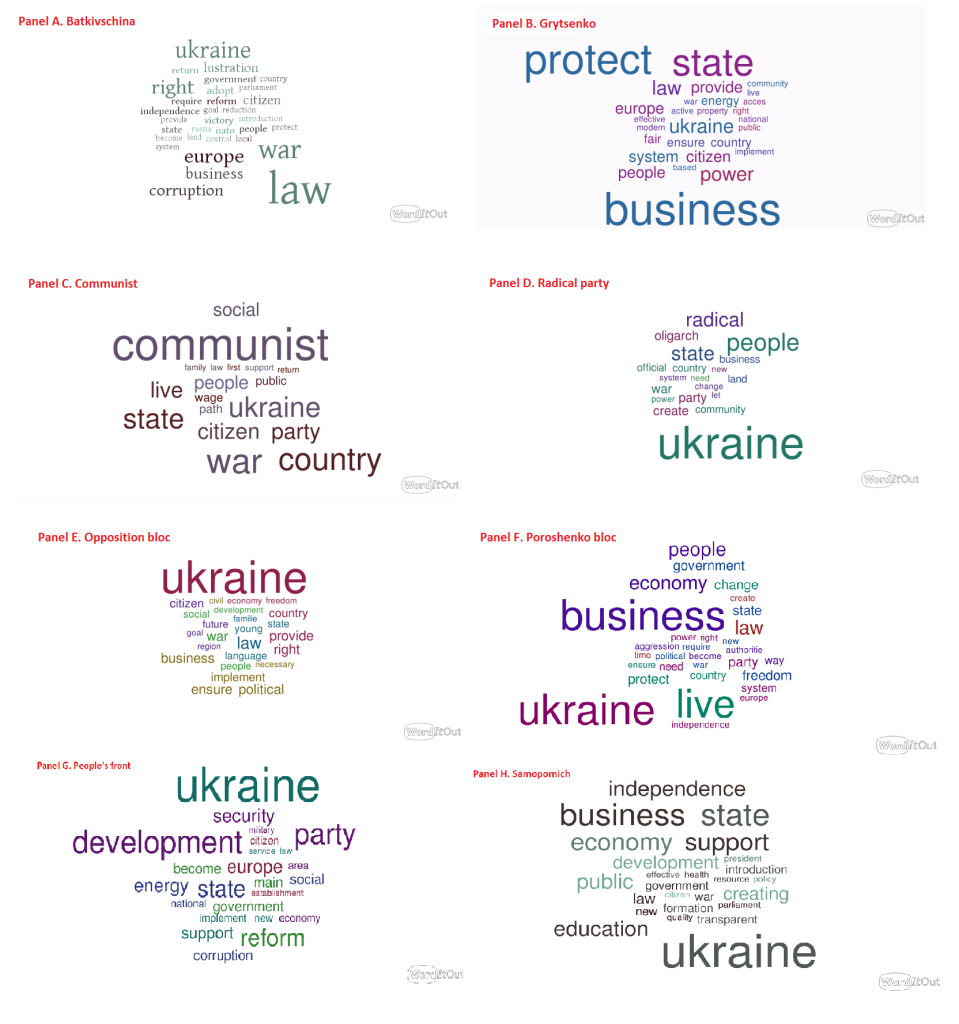 In summary, voters can choose from a diverse pool of political parties. A rational voter should choose a program that strikes a balance between ambition and realism. In other words, one does not want to choose a party that promises nothing, but one also does not want to choose a party with fanciful promises. An ideal party is between these extremes. Our analysis suggests that, based on party programs, a rational voter has a lot of information to rule out some choices. But the mainstream political spectrum is packed with similar parties and therefore second-order considerations (e.g., how tough/smart/attractive a political leader looks) can start to play a role.