Failing To Notice Russia’s Aggression And Writing About Being Forbidden To Speak Russian. Pro-Russian media manipulations for the week of September 13-19

Failing To Notice Russia’s Aggression And Writing About Being Forbidden To Speak Russian. Pro-Russian media manipulations for the week of September 13-19

Strana could not think of any attempt of Russia to grab Ukraine, arguing that the United States do not recognize Russia’s aggression. The sites of Medvedchuk’s pool, as well as other outlets, spread the fake news about “extreme nationalists” being trained by the US secret services, initially broadcast by Russian state media. Almost all pro-Russian media outlets reported on America’s controlling the courts in Ukraine.

VoxCheck analyzes how Russian narratives get into Ukraine’s information space as part of a joint project with the Center for Strategic Communications.

Fake news: “There is no Russian aggression against Ukraine

Over the eight years of Russia’s annexation of Crimea and occupation of Donbas, Strana has failed to notice Russian aggression against Ukraine. Commenting on Zelensky’s interview with CNN, Lesya Medvedeva said in a video blog that “Zelensky hasn’t mentioned even one attempt by the Russian Federation to seize Ukraine over the last eight years. Well, meaning the whole of Ukraine. And over the 30 years of our country’s independence. Or over 100…”

Besides, Strana argues that Russia is not considered to be the aggressor in the West either. The article refers to US Secretary of State Anthony Blinken speaking at a Congress hearing. A Republican congressman asked the Secretary of State whether the United States would support Ukraine in the event of Russian aggression.

“Both the Republican congressman’s question and the Secretary of State’s answer contained a sentence that completely crushes the core of the current (and previous) Ukrainian government’s propaganda. The Congressman asked what would happen “in the event of aggression”, and Blinken answered they would help “in the event of aggression”. All this means that both of them believe there is no Russian aggression against Ukraine at the moment. This is despite the fact that the term “aggressor country” was even introduced in Ukrainian legislation,” Strana writes.

In reality, Anthony Blinken affirmed the United States’ “unwavering support for Ukraine’s territorial integrity in the face of Russia’s ongoing aggression” in Donbas and Crimea. But it is hardly surprising that Strana refuses to see Russian aggression: in its publications, it regularly accuses Ukraine of escalation in Donbas, writing that it “benefits” Ukrainian authorities.

Fake news: Americans control Ukraine’s courts and the whole of Ukraine too.

On September 13, the Council of Judges of Ukraine failed to elect three members of the Ethics Council, an oversight body to monitor the integrity of the High Council of Justice (HCO) members. The HCO is an independent judicial governing body that can hold judges accountable and clean up the judiciary. According to Anti-Corruption Action Center, the actions of the Council of Judges are considered to be deliberate blocking of reform.

The Ethics Council that failed to be elected should have six members: three of them are elected by the Council of Judges of Ukraine, and the other three by international organizations. The latter’s participation in the process is the reason for pro-Russian media manipulations regarding Ukraine’s “external governance.” 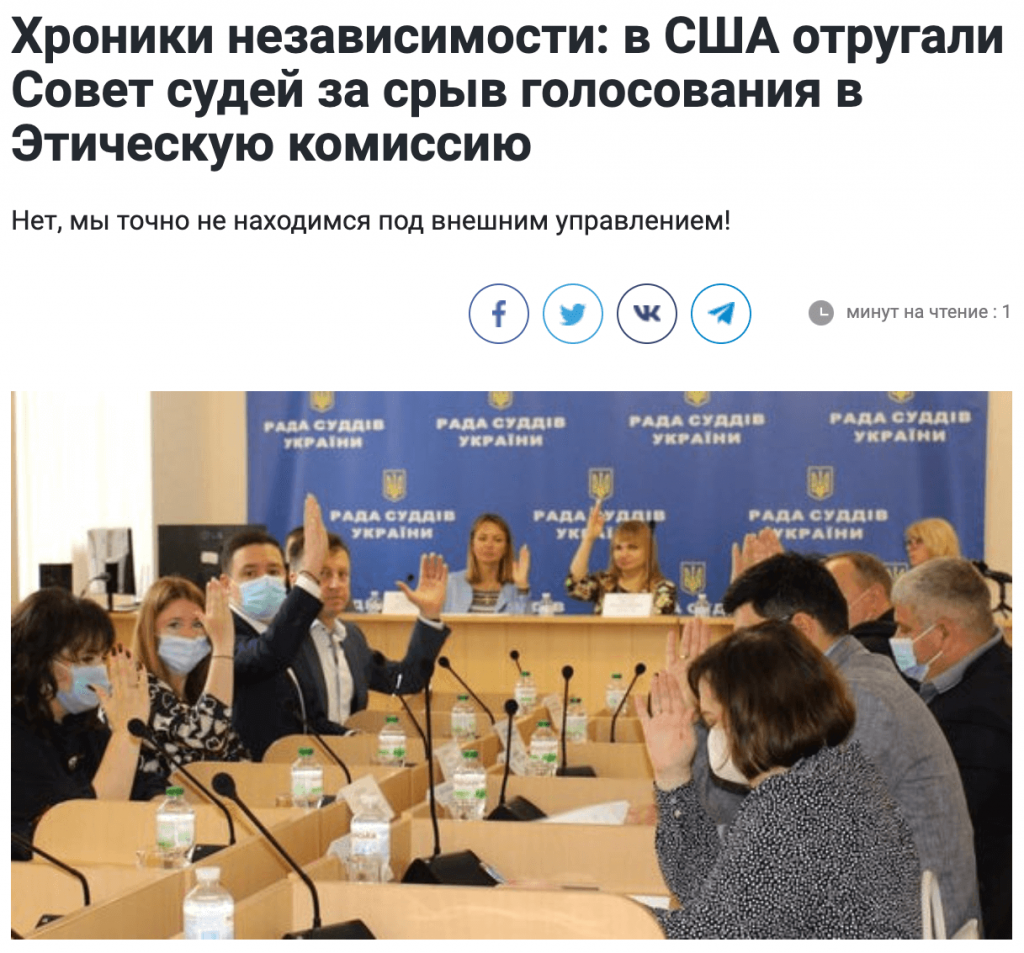 “Chronicles of independence: the US reprimanded the Council of Judges for disrupting voting on the Ethics Committee

Of course, we’re not under external governance!“

“Overall, the “Western friends” have hooked on our courts, with a death grip. Yesterday, Zelensky even had to summon an emergency meeting with judges, G7 and EU ambassadors,”  the Telegram channel “Klymenko Time” writes. “Ukrainian authorities keep carrying out the West’s key requirements of strengthening the external control (including of the courts),” says the post in the Telegram channel “Strana”. 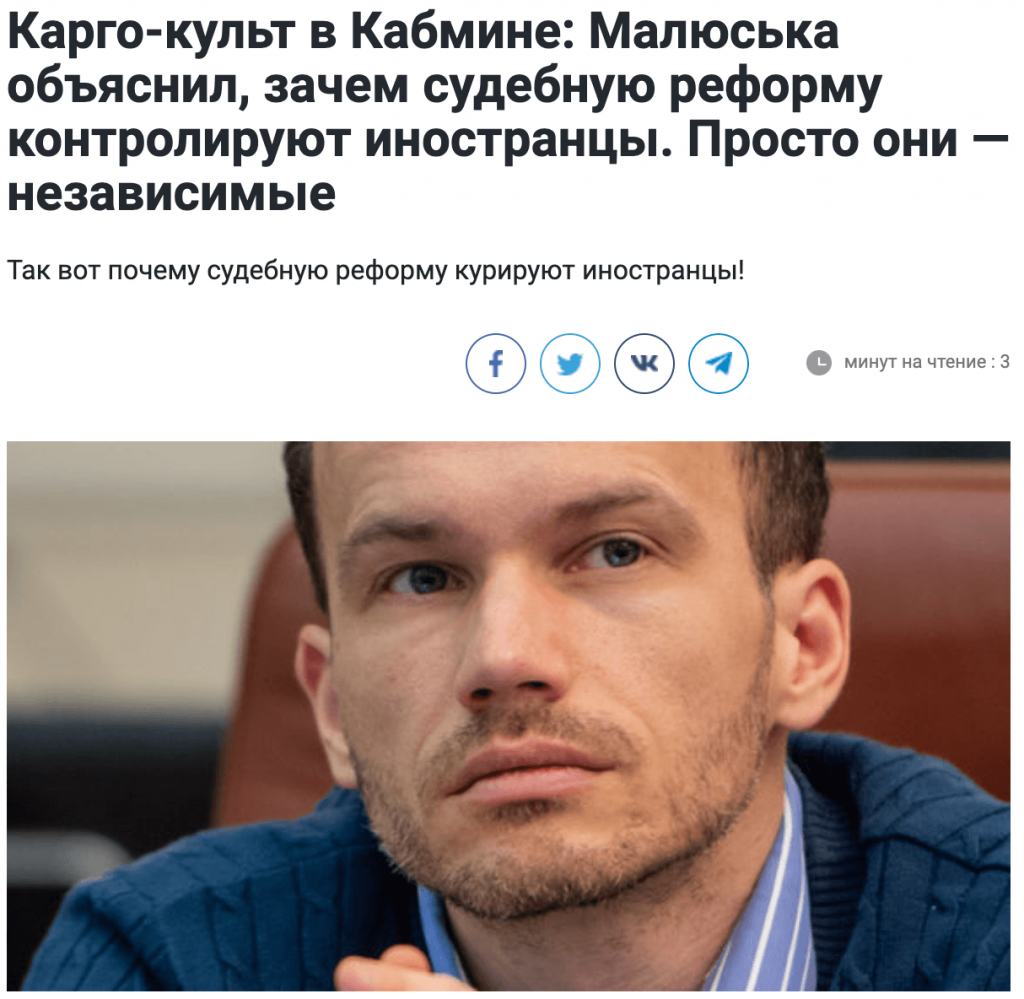 “Cargo-cult in the Cabinet: Maliuska explained why foreigners oversee judicial reform. Simply because they are independent

That’s why foreigners are in charge of judicial reform!”

However, that is not the only thing they accuse the West of. Pro-Russian media write about the US control over Naftogaz. The day before, independent members of the Supervisory Board had resigned due to the lack of understanding with the company’s Board, so the topic had come up again. However, pro-Russian politicians are always talking about “foreign control” over Ukrainian enterprises.

In reality, foreign members of supervisory boards are not involved with the operations management of state-owned companies. They make sure that the managers running state-owned enterprises work in the interests of the main shareholder, i.e. the state, and not to the good of oligarchs or politicians. Supervisory board members are hired by the Government and can be fired in case of poor quality of their work. Not only foreigners are on supervisory boards. However, those from less corrupt countries do not have their own interests in Ukraine or connections with interested parties, so they can provide objective oversight of business operations. 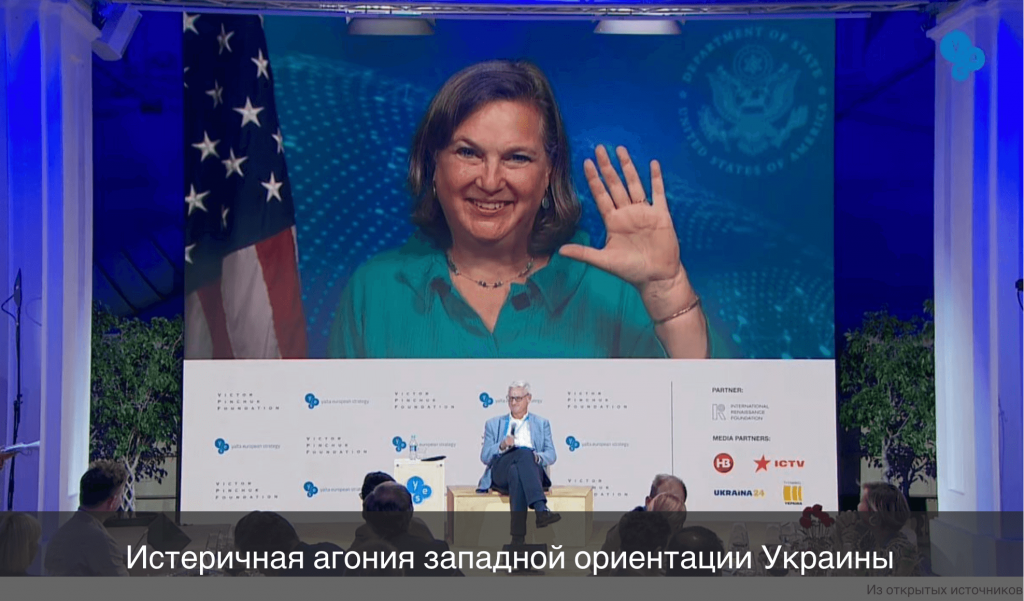 “The historic agony of the Western orientation of Ukraine “

On the Ukrainian Format show aired on the First Independent channel, the West was also accused of giving orders to hand over Crimea and destroy 78 banks. The eternal Russian myths were also there: speaking live on “Nash”, host Maks Nazarov hinted that the United States also organized the Euromaidan.

Fake news: “It is forbidden to speak Russian”

Strana’s website published an article with a manipulative headline “Worked a la Navalny and forbade [people] to speak Russian. What the National Security and Defense Council approved on Friday”. In reality, the National Security and Defense Council did not make any decisions regarding the use of the Russian language, as the title might suggest. In reply to a question asked by a journalist in Russian during the briefing, the Council’s Secretary Danilov said the following: “It just so happens that I get tense when I hear Russian.” And he was asking the journalist to clarify the question. Pro-Russian media outlets presented Danilov’s statement as oppressive towards the Russian language.

The Telegram channel “Klymenko Time“ (a media outlet controlled by Oleksandr Klymenko, former Minister of Revenue and Duties of Ukraine and a friend of the Yanukovych family) spread the news that the Secretariat of the State Language Protection Commissioner cost Ukraine nearly UAH 17.7 million. “Taxpayers paid almost 17.7 million hryvnias to maintain the Department that is busy dividing society and discriminating on the basis of language”.

The head of the Secretariat, Taras Kremin, is one of the favourite figures for pro-Russian media. They talk about the violent Ukrainization and propaganda on the part of official Kyiv, and the language ombudsman allegedly serves as proof of that. According to Vesti, he “informs on Russian-speaking teachers”.

Manipulation: The Ukrainian and Russian peoples do not feel the need to separate

This part of the propaganda myth says that Ukrainian authorities are artificially inciting enmity between the “fraternal peoples”. Russia is in denial of armed aggression in Crimea and Donbas; therefore, it needs to somehow justify Ukraine’s reaction to these events. Hence the myth that Kyiv propagates hatred of all things Russian.

“The peoples themselves do not see or feel any need to separate from each other, which has been proven by the area that the Ukrainian government cannot regulate. So far! That is, social networks,” says Strana in a video blog. However, they provide an extremely unconvincing argument, saying that Ukrainians do not seem to want to separate from Russians because they write queries on YouTube and Google in Russian. Strana fails to explain though how it could be related. But it regularly publishes a barrage of criticism of the “nationalists” that “measure patriotism” by the language a person speaks.

Vesti did not go too deep into the narrative and simply disseminated Putin’s press secretary’s statement that Ukrainians and Russians “remain relatives”. And, to boot, they spread a quote from Medvedchuk that Zelensky’s regime “will never divide the peoples”. The same was duplicated on the websites of the closed channels 112 and Zik.

Pro-Russian websites, including some of the closed channels of the Medvedchuk’s pool, spread the news that US intelligence services had been sponsoring and training the Ukrainian opposition, including “extreme nationalists” for decades. This was purportedly stated by the American director Oliver Stone. However, they were referring to Parlamentskaya Gazeta, an official publication of the Federal Assembly of the Russian Federation.

According to the film director, the United States tried to establish a “pro-American and anti-Russian political regime”. It is an interesting coincidence that pro-Kremlin media have the same version. Stone himself is notorious for making films about Ukraine with Putin and Medvedchuk in the lead roles, as well as the complementary film “Interview with Putin”.

In Stone’s “Revealing Ukraine”, the events of 2013-2014 are shown according to the Russian guidelines: Crimea was not annexed but “reunited” with Russia, and there is a “civil war” in Donbas. In the film, Putin is a peacemaker while the role of the Russian Federation in the annexation of Crimea and the occupation of Donbas is not mentioned at all. And Medvedchuk is the only person able to save Ukraine. The film was released before the 2019 parliamentary elections. In his interview with Putin, Stone asked the Russian president to baptize his daughter promising to make her Orthodox. 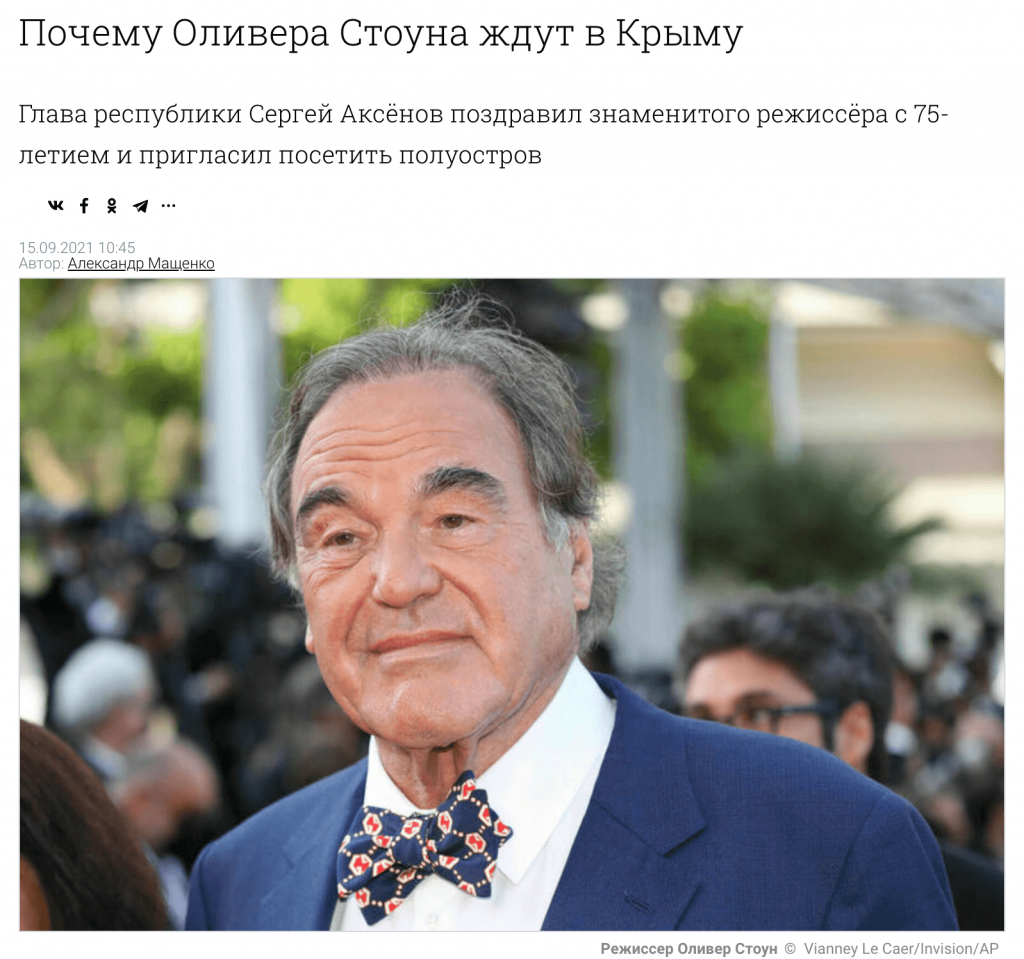 “Why Oliver Stone is welcome in Crimea.

The Republic’s head Sergey Aksyonov congratulated the famous film director on his 75th birthday and invited him to visit the peninsula.“

By the way, this week, pro-Russian media were especially active writing about all the figures used for intimidation by Russian propaganda: “nationalists“, “fascists“ and “Banderites”.

Screenshot: Vesti website disseminating the statements of the OPFL party and its members, similar to the websites of Medvedchuk’s pool

“OPFL: The authorities are not prosecuting Medvedchuk but the millions-strong non-Banderite Ukraine”

VoxCheck analysts monitor the websites and social networks of Ukrainian pro-Russian media on a daily basis to identify the main news or topics of the week that get the most airtime and attention in the news feed. We identify key narratives for the past week and analyze their origins.

VoxCheck searches for fakes news and manipulations to debunk them. The “click and check” method lies at the base of our fact-checking. Everyone can check our argumentation and sources. Fact-checking can only be based on open data with relevant links. A fact-checked article can only be published if signed by two members of the editorial board.

FAKE: Zelensky wore a T-shirt with the UPA emblem

FAKE: Zelensky wore a T-shirt with the UPA emblem

FAKE: Cocaine on Zelensky’s desk during a video call