In 2022, social media users share video in which “Azov” fighters allegedly crucified and burned an unknown man alive. However, this is a video-staging, and it was published in 2015 by a group of pro-Russian hackers systematically spread fakes about Ukraine.

At the beginning of the video, five men in military uniform are standing next to the prisoner. One of the fighters said to the camera: «We are soldiers of the Azov Battalion, which is fighting against the Muscovite evil spirits. What is about to happen will happen to everybody for aiding separatism» (direct speech is reproduced literally). Then the soldiers approach the man who is on his knees, take him by the arms and allegedly start nailing him to the cross.

In 2015, this video was shared by a number of russian media, including the state federal TV channels «Zvezda» and «REN TV». The publications claim that «Azov» fighters sent this video of the massacre to “militias” and hackers from «CyberBerkut”. Video was allegedly shot near Shyrokino (Mariupol district, Donetsk region). 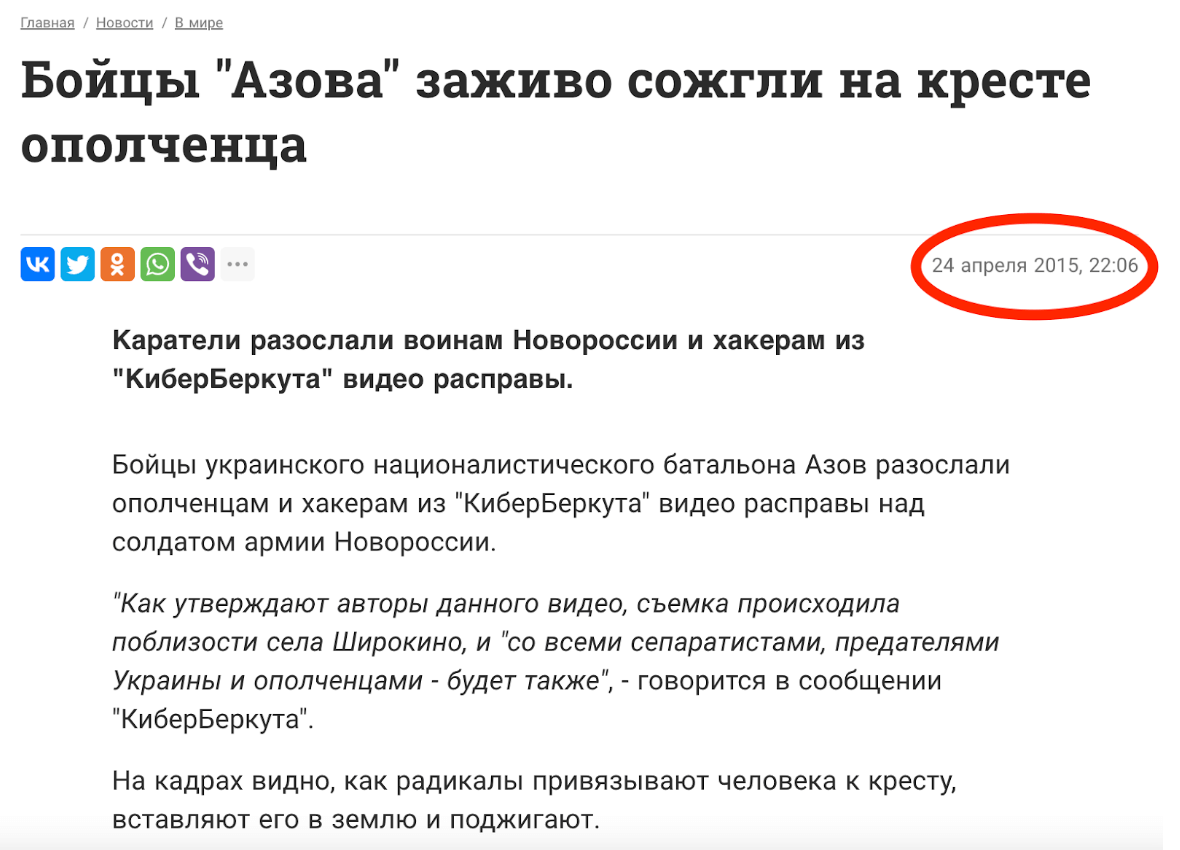 «Cyber ​​Berkut» is a group of hackers who in 2014-2015 actively published fakes about Ukraine under the guise of publishing «secret documents». In May 2014, hackers claimed to have destroyed the electronic system of the CEC of Ukraine “in protest against the legitimization of the crimes of the Kyiv hunta” (wording used by russian propaganda to indicate the legitimately elected government in Ukraine after the Euromaidan events). Back in 2014, cyberwar expert Jeffrey Carr called «Cyber ​​Berkut» a staunch supporters of Viktor Yanukovych and “a pro-Russian group of activists working against Ukrainian independence.”

Russia has been promoting the narrative that Euromaidan is a “coup d’etat” for years. The Russian disinformation database in the German and Italian media «Propaganda Diary» from VoxCheck has almost 50 fakes on this topic.

It is noteworthy that in the video, people in military uniform are presented as fighters of the «Azov» Battalion. However, in 2014, «Azov» was reorganized and expanded into a regiment within the National Guard. The soldiers who were part of the regiment could not help but know about it. Instead, russian media continue to use wording Azov «battalion».

In April 2015, «Azov» disproved their involvement to this video. The statement was published on the currently blocked in Ukraine VKontakte resource (as of 2015, the social network has not been blocked yet). «Azov» pointed out that the uniform of the unknown people from the video is different from the uniforms of «Azov».

«The video shows the alleged «Azov» chevron on the actor’s hand. The size of the chevron is much larger than the size of the standard chevron used in «Azov». One of the actors in the video is in white suspenders, which is not an attribute of the «Azov» uniform (form different from that stated in the charter is prohibited in «Azov»), – the statement said.

In fact, at several moments of the video you can see that one of the men is wearing a massive badge, much larger than the typical military chevrons. The low quality of the videos, which were stored online in 2022, does not allow us to see whether the chevron is the symbol of «Azov». In any case, the official chevrons of «Azov» have a different look. 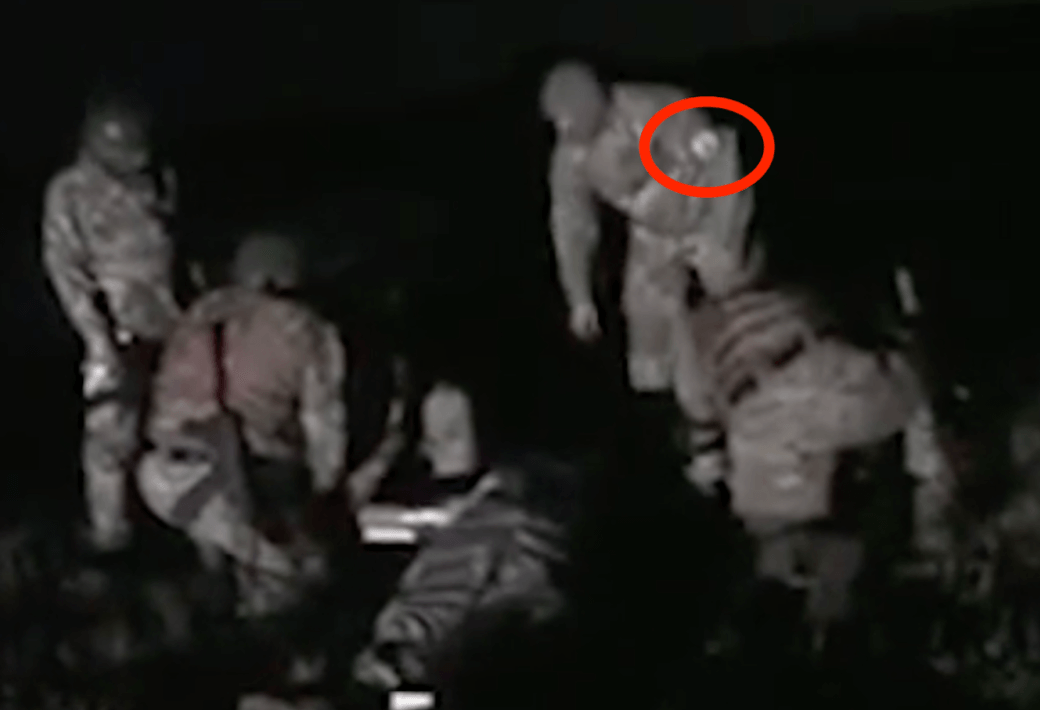 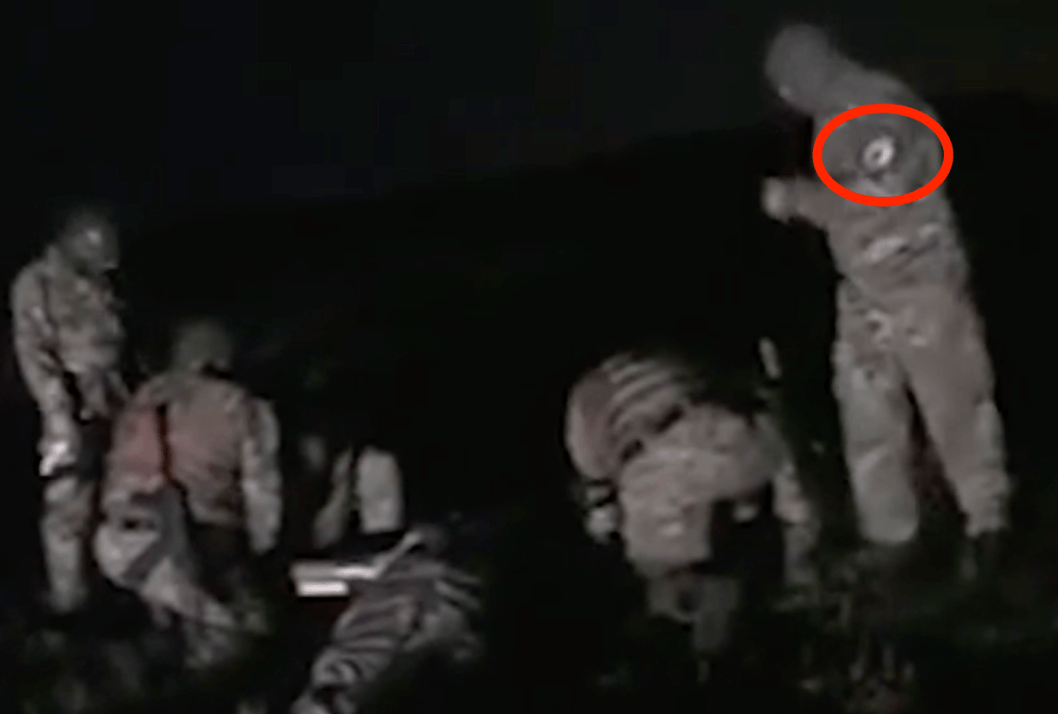 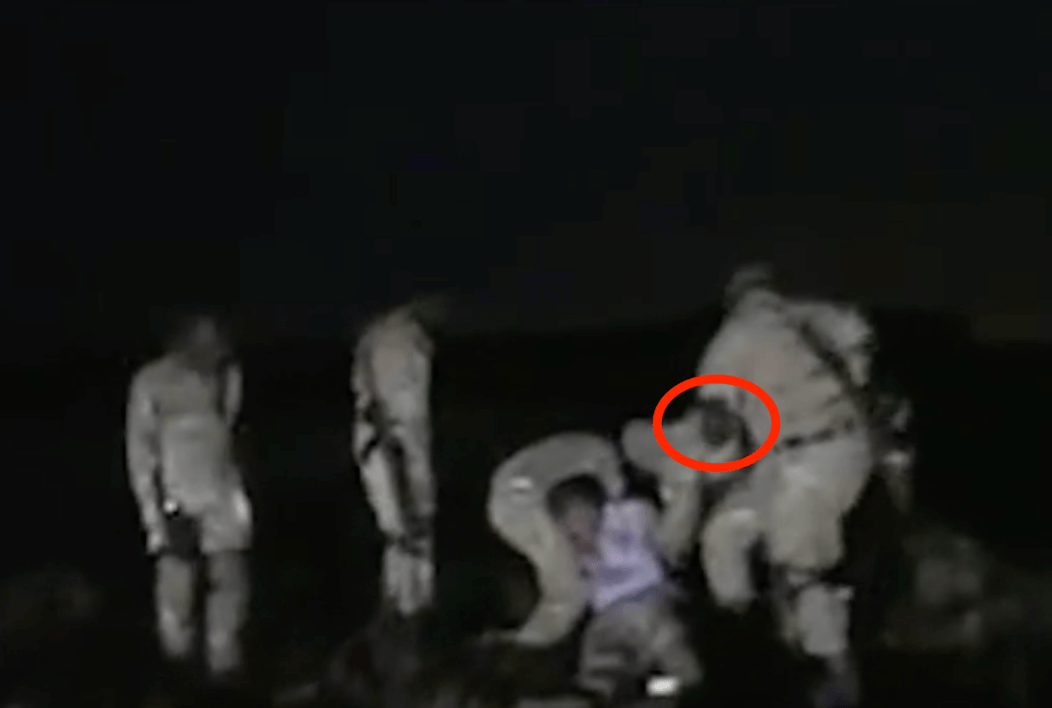 Screenshot from the video where large chevron can be seen 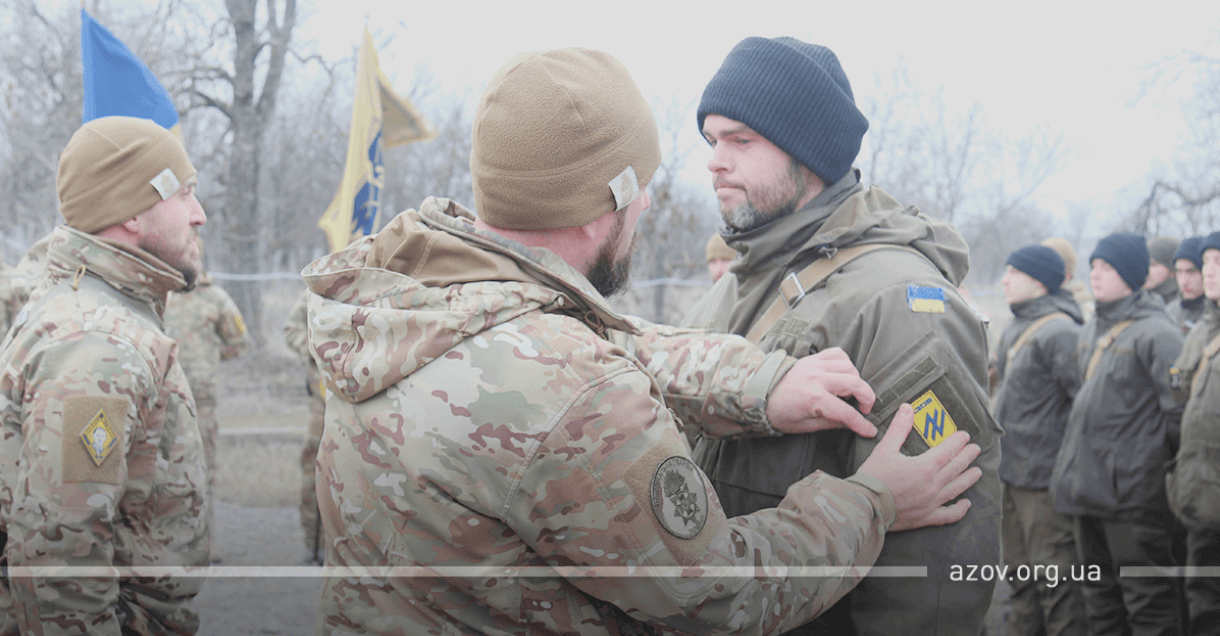 Chevron of the «Azov» Regiment, view on hand.  Source  – official website of «Azov» 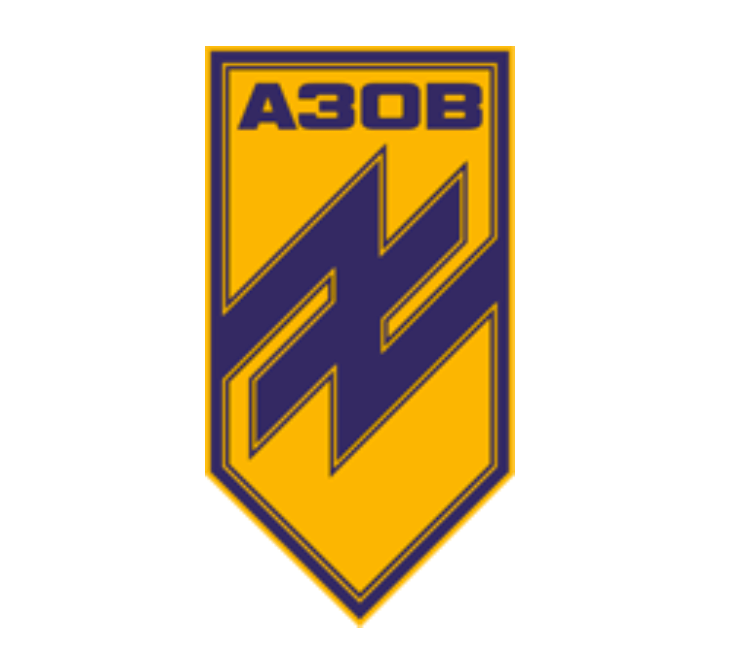 Chevron of the «Azov» Regiment. Source — official website of «Azov» 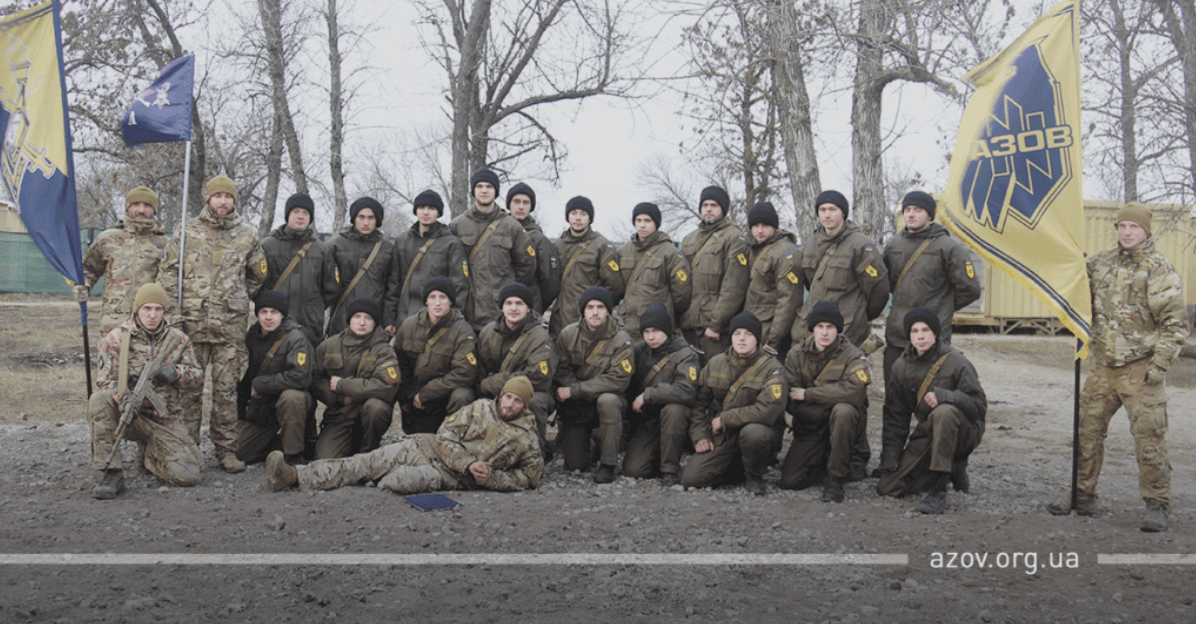 Chevrons on the soldiers of the «Azov» Regiment, view from afar. Source — official website of «Azov»

The video itself has signs of a video-staging: the “crucifixion” of a man lasts only 40 seconds, and it seems that the burning is not shown – the video ends at the moment when the military has to set fire to the «militia».

In addition, the 2015 disproof of «Azov» states that the video was falsified and aimed to discredit «Azov», as the regiment recently issued a statement against the demilitarization of the village of Shirokine. While the video of the crucifixion of the “militia” was allegedly shot in Shirokine.

Shirokine is a village in the Volnovakha district in the Donetsk region, located on the shores of the Azov Sea, about 15 kilometers from Mariupol. In military terms, it was important because of its location on the road from occupied by the DNR militants Novoazovsk, to Mariupol, which is controlled by Ukraine.

However, in April 2015, the Ukrainian Ministry of Defence submitted a plan to demilitarize Shirokine, which provides for a complete ceasefire, withdrawal of military units of the parties to a certain distance, demining, and so on. Azov was against demilitarization because it would give militants access to Mariupol.

It is not the first time that russian propaganda has made fakes about the atrocities of the «Azov» Regiment. Earlier, VoxCheck disproof the fake, where allegedly «Azov» fighters tortured the girl in Mariupol and burned a swastika on her body.