A screenshot is being distributed online in English stating that sunscreens, food sweeteners, mammograms, and fluoride (a substance in toothpaste) are harmful and cause cancer. We refute these false allegations.

“The sun protects against cancer”

Ultraviolet (UV) radiation contained in sunlight is a potent mutagen and immunosuppressant, so exposure to solar UV is the biggest risk factor for skin tumors. The risk of skin cancer increases when people are too much in the sun or deliberately exposed to artificial sources of ultraviolet radiation. 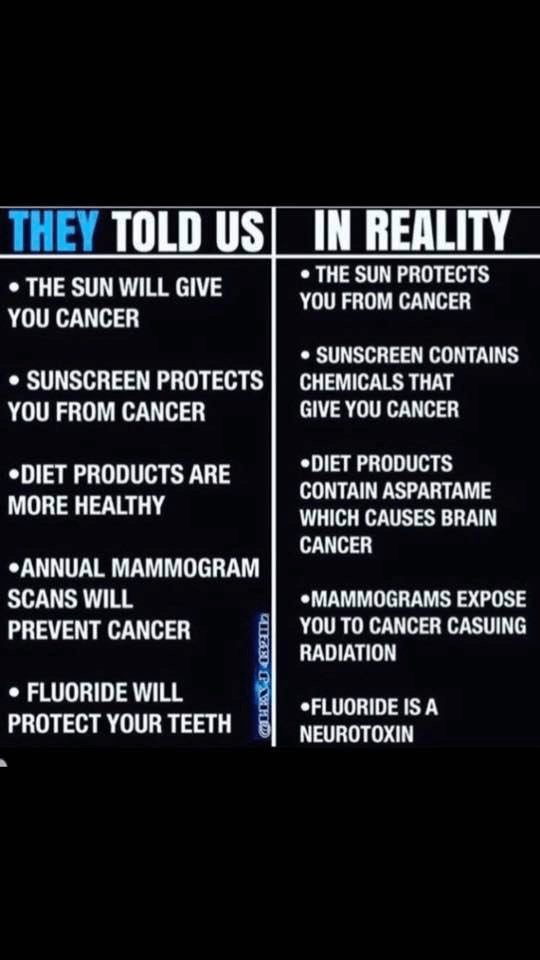 Nevertheless, vitamin D, which is formed in the skin under the influence of the sun, is necessary for the human body. Its deficiency can lead to various types of cancer, bone disease, autoimmune diseases, hypertension, and cardiovascular disease.

A recent study provides evidence that sunlight can protect against some internal malignancies. Because patients with these tumors are often deficient in vitamin D, the researchers suggested that vitamin D supplements would be helpful in treating various cancers. However, the results of already completed tests did not confirm this theory.

Scientists are trying to develop balanced guidelines for UV protection that will provide adequate amounts of vitamin D in the body without increasing the risk of skin cancer.

In 2019, the U.S. Food and Drug Administration published a study that showed that at the maximum recommended dose (indicated by the manufacturers on the label) of some sunscreens, their active ingredients can be absorbed through the skin and remain in the body for some time. However, this year, publishing the next extended study, the Office stressed that the fact that these substances can enter the body does not mean that sunscreen is dangerous. Moreover, it is too early to draw conclusions about their carcinogenicity — there is currently no evidence.

The European Food Safety Authority notes that aspartame and its breakdown products have been studied for 30 years, including clinical and epidemiological trials. After careful safety assessments, it has been determined that aspartame is safe and permitted for human consumption.

The U.S. Food and Drug Administration agrees with this conclusion, noting that aspartame is one of the most comprehensively studied substances — more than 100 studies confirm its safety.

The U.S. National Cancer Institute says no study has found a consistent link between aspartame use and the risk of cancer in humans.

“Mammography exposes you to radiation, which leads to breast cancer”

“Fluoride is a neurotoxin”

Indeed, there is a study in which the authors claim that fluoride is a neurotoxin and can damage the development of the nervous system. However, other scholars have criticized it for the lack of evidence, as the authors refer to only one document, which made numerous methodological errors. Therefore, there are currently no valid studies that would prove the dangers of fluoride. On the contrary, some studies show that fluoride (in doses that enter the body) is safe.

FALSE: Video of a fire in a shopping center in Kharkiv due to russian shelling