Fear for the Land Plots | VoxUkraine

Over the last three year, Ukrainians have witnessed an unprecedented battle over hearts and minds regarding lifting the moratorium for agricultural land sales. This battle took place both in the Parliament, in the mass media and now in the Constitutional Court of Ukraine. There is evidence that public opinion on the land reform was largely affected by myths and propaganda (e.g. What Political Parties Say about the Land Reform – and What the Voters Hear). Politicians and lobbyists tried to inflate the level of insecurity related to the land market.

Today, new data on security of property rights published by the Property Right Index (Prindex) gives us a unique opportunity to compare how people feel about security of their rights for land and housing property (which is regulated and protected by the same set of institutions, except of the moratorium for the land sales). This data also shows us how insecure Ukrainians feel in comparison to our neighbours from other Former Soviet Union (FSU) countries, other Eastern Europeans and other countries with well-established land markets.

In July 2020, Prindex published results of nationally representative surveys in 140 countries (including Ukraine). The survey was conducted at the end of 2019, just as the draft law on the land market was being debated in Ukraine. People were asked how likely it was that they would lose the right to their housing, land and other property against their will during the next five years. About 1000 respondents of 18 years and older were surveyed in each country.

The global assessment of security of property rights is based on the fact that every single person has one or another arrangement for housing, which is also one of the basic human rights. Globally, about 60% of housing is attached to land (has a land plot on which this housing stands and a yard or a garden attached to it). In addition, 18.5% of adults globally have some other property: a separate land plot, another housing unit or commercial real estate. For Ukraine, 55% of respondents replied that their housing is attached to land (which is not affected by the moratorium) and 16% have responded that they have other property in addition to the main housing unit. This number is similar to an average among other FSU countries. For comparison, 6.9 mn people (16% of Ukrainian population) have rights to agricultural land plots (paiy) which in Prindex survey are treated as other property.

With regard to the security of property rights, the case of Ukraine demonstrates some important differences from the neighbouring countries and the rest of the world. About 81% of Ukrainians feel secure about their rights for the current housing. This level of security is higher than the global average (74%), but similar to its neighbours in Belarus (87%), Moldova (82%) and other Former Soviet Union countries (83%). Similar to other countries, the insecurity in Ukraine’s housing market is driven by renters: 43% of renters vs. 4% of owners feel insecure.

What is different in Ukraine is that the perception of security of rights for other property (primarily the agricultural land) is lower than for the main property (74% vs. 81% of respondents feel secure). In contrast, in other countries, additional property serves as an extra source of security (or people who feel more secure are able to accumulate more property). For example, globally 74% of people feel secure about their primary housing vs. 78% for other property. For FSU countries, these numbers are 83% vs. 87% respectively. Only in two FSU countries – Turkmenistan and Belarus – do people feel more secure about their main home than their land and additional property, but the gap in these countries is much smaller than in Ukraine – (-2.5) and (-2.2) percentage points respectively (see Figure 1).

Figure 1. Differences in the perceived tenure security for land and housing (positive values mean that land is perceived more secure than housing) 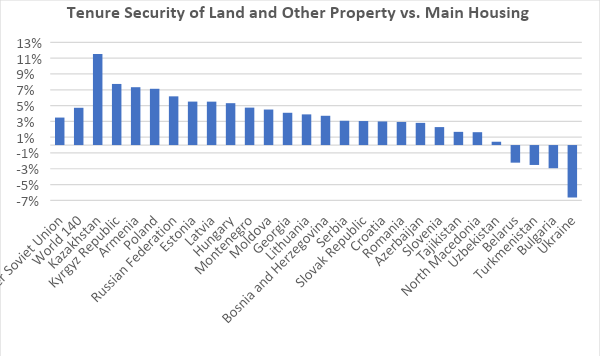 This difference in assessment of security of rights in Ukraine is particularly striking if we consider that housing tends to be much more valuable than land and people tend to be more concerned about more valuable assets. Moreover, this negative difference is driven primarily by rural population where the second property is likely to be the agricultural land (see table 1).

Note: in brackets among those who have other property

The high level of insecurity about agricultural land in the country is likely a result of propaganda and violations of property rights of agricultural land owners over the 20 years of moratorium. We can expect to see much of this anxiety dissipate in the nearest future as public attention moves on from the issue after the Law on land market comes into force (expected in July 2021) and the rights of landowners being restored.

At the same time, the Constitutional Court of Ukraine is considering the legitimacy of the law. The probability of rolling back the land reform as well as the imperfect justice system can significantly influence the negative assessment of security of property rights in Ukraine and undermine further development of the agricultural sector and rural areas of Ukraine. The next global round of Prindex survey in 2022 will show the extent to which the above anticipations are correct.