FAKE: Photos of containers for biohazardous waste from an underground hospital in Mariupol

FAKE: Photos of containers for biohazardous waste from an underground hospital in Mariupol

The picture of a red container for “especially dangerous bio-material” spread on the Internet. It was allegedly found in an underground hospital in Mariupol by correspondents of the russian media outlet “Komsomolskaya Pravda.” They claimed that it contained signs of “biological infection” and was designed for fluids, blood, and tissues. 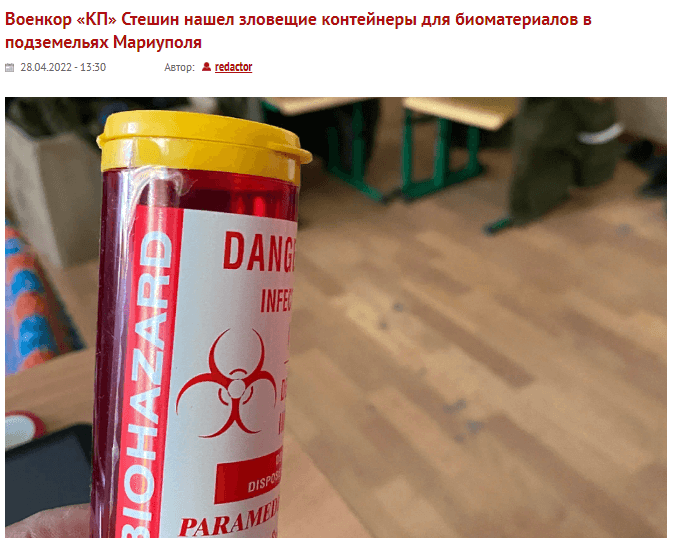 However, the photo shows a container for medical waste disposal that medical institutions and households can use. It was reported earlier by independent fact-checkers from Myth Detector.

In the Komsomolskaya Pravda article, we see another photo of the container. It has the inscriptions “Danger Peligro,” “Biohazard,” “wastes,” and “sharps.” We use these keywords to find information about this container. A screenshot from the Komsomolskaya Pravda article

These containers can be purchased online. The description of the container says it is intended for storing sharp objects. The red hue provides high visibility and simultaneously masks internal pollution. The container can be for professional and personal use.

Red color can also mean that the container’s contents are dangerous as it can store contaminated sharp objects.

According to the Center for Countering Disinformation of the National Security and Defense Council of Ukraine, russia has been conducting informational and psychological operations regarding the possibility of using weapons of mass destruction in Ukraine. For instance, russia’s defense ministry reported on April 23 that the United States was preparing provocations to accuse the russian military of using chemical, biological, or nuclear weapons in Ukraine.

“Such information inputs are part of the informational and psychological operation of the russian federation aiming to fuel panic among Ukrainians and pressure the world community to reduce the level of support for Ukraine,” the CCD said.

In March 2022, the United Nations Under-Secretary-General of Disarmament Affairs Izumi Nakamitsu said the UN was unaware of any biological weapons being developed in Ukraine. The United States said russia still supports its biological weapons development program.