The National Bank of Ukraine is set to adopt a combination of inflation targeting and a floating exchange rate regime. The transition to the new regime is likely to be complicated because of undeveloped markets, unstable fiscal situation, a war in Eastern Ukraine and a myriad of other factors. However, the gains from this new regime are potentially large.

The macroeconomic history of Ukraine has been a story of the fixed exchange rate as well as high and volatile inflation, macroeconomic instability, and banking/currency crises. Indeed, between 1996 when Ukraine introduced the hryvnia and 2014, the Ukrainian currency was almost continuously fixed to the U.S. dollar. Yet, despite a short history, Ukraine’s currency already went through multiple major devaluations (1998, 2001, 2008, 2014). These radical adjustments of the exchange rate restored the external competitiveness of Ukrainian goods in foreign markets but they also generated wild gyrations of inflation and created havoc in the banking system and the rest of the economy.

Now Ukraine has a floating exchange rate regime. The float is not entirely free as the National Bank of Ukraine (NBU) imposed capital controls for the rest of 2015 and it continues to do periodic interventions in the foreign exchange market.  During the JCE conference organized by VoxUkraine and hosted by the KSE, Valeriya Gontareva, the head of the NBU, announced that the NBU’s policy framework is going to be inflation targeting. As a part of this new regime, the hryvnia will continue to float freely against foreign currencies. Unfortunately, the public may still be unclear about why Ukraine should not have had a fixed exchange rate regime, and how costly it was to run it in the past.

Consider Figure 1. Export revenue for these three countries and Ukraine is heavily dependent on commodity prices. A boom in prices for energy, raw materials, and metals between 2001 and 2007 generated a windfall for the countries. When commodity prices temporarily collapsed during the Great Recession so did the export revenues of these countries. As commodity prices recovered in the aftermath of the Great Recession, so did the exports. In short, all these countries—Ukraine, Chile, Canada, and Australia — went through significant turbulence but the policy response to these fluctuations was different and, as a result, macroeconomic outcomes were quite different too. 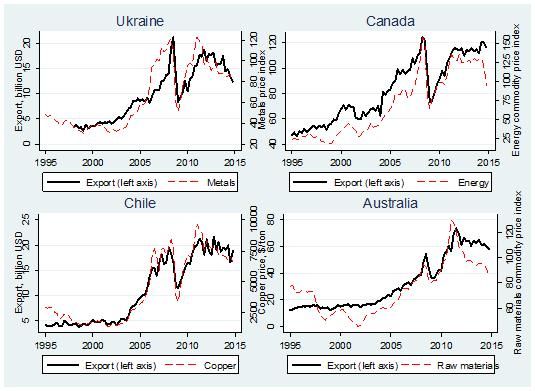 Figure 2 shows that despite a massive increase in the price of metals, Ukraine maintained a fixed exchange rate. In contrast, the currencies of other countries had very significant appreciation up until the start of the Great Recession. This appreciation made imported goods cheaper relative to domestically produced goods and thus created a “cooling” effect on the economies of Chile, Canada and Australia. 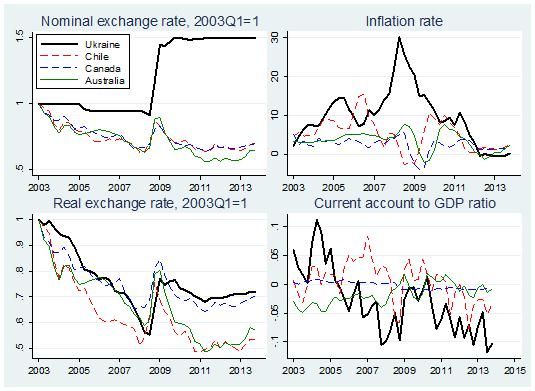 Not surprisingly, Australia, Canada and, to a somewhat lesser extent, Chile had stable inflation over the period. For example, the inflation rate in Australia and Canada was close to the official target of 2 percent per year. In contrast, Ukraine’s fixed exchange rate regime led to a double-digit inflation. The effect of this high inflation in Ukraine was that the hryvnia appreciated in real terms. That is, the real exchange rate — defined as  where EX is the nominal exchange rate,  is the price level in the US,  is the price level in Ukraine — fell. The magnitude of this real appreciation was similar to the magnitude of real appreciation of the currencies in Australia, Canada and Chile and, thus, the ultimate effect on exports (in USD) was similar for all four countries (Figure 1). The key difference, however, is that the adjustment in Ukraine was done via high inflation (a huge inflow of capital led to notable increase in money supply due to the non-sterilised interventions by the central bank on the interbank forex market) while in other countries the adjustment was done via the nominal exchange rate.

Consequently, Canada, Chile, and Australia had approximately balanced current accounts — one can think of these as approximately how much exports exceed imports — while Ukraine turned from having a strong current account surplus in 2004 (10.7% of GDP) into a deep current account deficit (7.1% of GDP) in 2008. This glaring imbalance made Ukraine extremely vulnerable to the panic and capital flight during the Great Recession. Given the sudden stop of capital flows into Ukraine and strongly overvalued exchange rate, the National Bank of Ukraine devalued the hryvnia. As a result, while Chile, Canada and Australia had mild recessions, Ukraine had a disastrous stagflation-like downturn: GDP fell by 15 percent in 2009 while inflation was in excess of 20 percent per year.

Strikingly, this sad lesson — or previous lessons — did not teach policymakers in Ukraine that having a fixed exchange rate coupled with volatile terms of trade and inability to commit to sound fiscal policy — for example, Ukraine’s government consistently ran fiscal deficits — is a bad policy mix. The story repeated in 2009-2013: the hryvnia was fixed at a new level, inflation was close to 10 percent in the early part of the period, real exchange rate appreciated, temporary gains in the current account were lost and Ukraine was running again a 10% current account deficit by 2013. Policymakers took credit for the low inflation rate in 2012-2013 but, in effect, it was a symptom of the economy not doing well. Indeed, industrial production in Ukraine was declining. Despite the looming crisis, the nominal exchange rate was maintained at the cost of losing foreign reserves and borrowing from abroad, which raised the ex post cost of devaluation. Again, the hryvnia became vulnerable and the crisis was inevitable: the hryvnia had to be devalued and it was just a question of time when this was going to happen.

If these countries appear far-off, one can compare the experience of Ukraine and Poland, which uses inflation targeting and has a flexible exchange rate regime.  Figure 3 shows that although Poland ran a current account deficit (there has been a massive inflow of FDI into Poland), its currency appreciated during the boom years, the Great Recession had only a mild effect on the growth rate of the Polish economy, inflation was low and stable. By and large, the Great Recession was a minor nuisance in Poland. 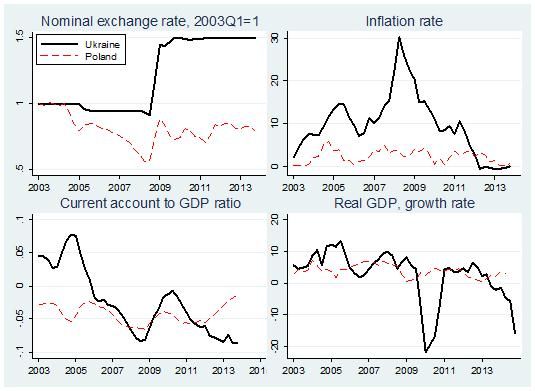 If the experience of these countries is any guide, Ukraine could have avoided major macroeconomic instability. Now the central bank in Ukraine is set to adopt best practices of leading central banks: a combination of inflation targeting and a floating exchange rate regime. The transition to the new regime is likely to be complicated because of undeveloped markets, unstable fiscal situation, a war in Eastern Ukraine and a myriad of other factors. However, the gains from this new regime — just imagine that Ukraine had not had massive crises in 2008–2009 and in 2014–2015 — likely outweigh the cost of temporary volatility. Going back to a fixed exchange rate is a dead end. It seems that the policymakers at the NBU’s helm appreciate the trade-off and will not go back a regime so prone to crises.

Obviously, Ukraine is not going to turn into Canada, Australia or even Chile overnight, but Poland should be a source of inspiration. Before it adopted inflation targeting and floating zloty in 1999, Poland suffered from many of the macroeconomic problems Ukraine has now. Yet in a matter of years, Poland made major progress in achieving macroeconomic stability.

Hopefully, the institutional change in Ukraine will be fast, and learning curve for the leadership in the National Bank of Ukraine will be steep, so that Ukraine can enjoy fruits of macroeconomic stability soon.