From Oschadbank To PrivatBank: How Ukraine Got Its State-Owned Banks And Why Wants To Sell Them | VoxUkraine

From Oschadbank To PrivatBank: How Ukraine Got Its State-Owned Banks And Why Wants To Sell Them

The assets of the state-owned banks keep growing. This year, their share in the net assets of Ukraine’s banking system exceeds 55%, with Oschadbank, PrivatBank and Ukreximbank being the biggest market players. How did Ukrainian state-owned banks emerged and why did some of them later disappear? What do studies and global experience say about their benefits and risks? And, why should a country own banks anyway?

Following the collapse of the Soviet Union, private capital started playing an increased role. As of the end of 1995 the country had 230 banks with only two being state-owned: the State Savings Bank of Ukraine (Oschadbank) and the State Export-Import Bank of Ukraine (Ukreximbank). Oschadbank became the legal successor of the State Specialized Commercial Savings Bank of Ukraine in 1991. Ukreximbank was founded by the government as a development bank. The bank’s objectives include supporting export oriented and import substitution sectors, stimulating external trade, and acting as the government’s financial agent.

The number of state-owned banks in Ukraine grew following the financial crisis of 2008-2009 which left 12 banks out of business and three banks nationalized to avoid a more negative impact on the banking system. So in 2008-09 Ukrgasbank, Rodovid Bank and Bank Kyiv became state-owned. 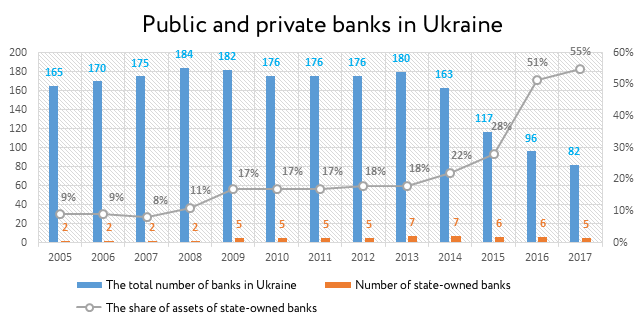 The number of state-owned banks declined starting from 2013. In 2016, the state-owned Ukrainian Bank for Reconstruction and Development, originally founded “to financially support investment projects”, was sold to Chinese investors, Rodovid Bank was withdrawn from the market and Bank Kyiv is now undergoing a liquidation. It should be noted that the state’s share in the total assets of the banking system doubled the same year (from 28.1% in 2015 to 51.4% in 2016) following the nationalization of PrivatBank.

The number of commercial banks grew fastest in 2005-2013, and in 2014 it was halved due to the economic crisis, loss of assets on the uncontrolled territories and the NBU’s policy of strengthening banking supervision.

As of the start of 2019, the state owned 55.3% of the net assets of the banking system. The banks are servicing a total of 27.3 million payment cards which is 74% of the total amount of plastic bank cards in Ukraine. Of these, 20.4 million are the cards issued by PrivatBank.

Why state-owned banks come into being

Nationalizing the privately owned banks to save the economy and financial system. In Ukraine, the share of state-owned banks generally grew during economic and financial crises. However, this is not only typical of Ukraine. The most common reason for nationalizing private banks or increasing ownership in their capital on the part of the state is to save the systemically important players (too big to fail) whose problems can cause considerable harm to the entire economy or financial system.

A local example of saving a systemically important bank is the nationalization of PrivatBank whose collapse or improper activities could trigger a crisis of the entire banking system. To avoid such consequences and protect the depositors’ funds in case of PrivatBank’s failure to increase its capital (by UAH 148 billion) and delayed repayments with regard to the additional capitalization of UAH 14 billion, the government made a decision on nationalization in December 2016.

“Financial recovery”. Besides nationalizing the systemically important banks, governments may buy into regular banks to save them from bankruptcy. For instance, in 2009-2011 Ukrainian government became the majority owner of Ukrgasbank, Rodovid Bank, and the Bank Kyiv. They were not systemically important but the government decided on buying into them to avert their collapse. Nonetheless, the last two were liquidated since the nationalization was not matched by best management practices in said banks and they continued to participate in dubious schemes providing loans to low credit quality borrowers.

Governments can also establish state-owned banks to implement various economic development goals that do not always receive financing from private banks. E.g. investments in technology projects in the early stage, financing state infrastructure projects, and supporting the priority sectors as defined by the government.

However, Ukraine’s experience with state banks has not been very successful. For instance, the Ukrainian Bank for Reconstruction and Development was founded in 2004 to support investment projects. It was supposed to become the main lending tool for the “strategic sectors” of Ukraine’s economy but failed completely ending up sold to a Chinese investor.

State-owned banks can also have social functions. With the privately owned banks’ main objective being to make a profit, they may not be present in unprofitable localities, such as rural and remote regions. However, people need financial services there too. State-owned banks can fill this void. For instance, in addition to its regular branches, Oschadbank has 5 mobile offices two of which provide services along the demarcation line in Donbass.

What benefits are offered by state-owned banks?

Like the experience described above, economic studies confirm some anti-crisis properties of state-owned banks. In addition to saving those “too big to fail”, state banks can solve credit market failures and ensure more even distribution of loans during business cycles, and especially in periods of economic downturn (Bertay et al. 2015).

Privately owned banks lend to businesses more procyclically than state-owned banks: they expand their credit during economic growth and decrease it during recession. Procyclicality of lending may exacerbate economic crises and complicate their resolution. Lending by state-owned banks is prone to be less procyclical or even countercyclical which may contribute to greater stability of the financial system. Yet, this is typical of countries with good governance. In addition, the question arises whether the loans are effectively distributed: do they reach those who need them most, i.e. small and medium enterprises or larger politically favored enterprises that have better access to external financing anyway? (Bertay et al. 2012).

Drawbacks and risks of state-owned banks

Global experience and economic studies point to the main drawback of state-owned banks, namely their being used for political ends: lending to politically affiliated businesses, political allies and the population around elections. This calls into question the appropriateness of using state-owned banks as a long-term tool for mitigating economic cycles.

Politically induced lending. For instance, a recent study by Turkish economists reveals that state-owned banks systemically act in the interest of the incumbent authorities providing loans to their party allies around local elections. In contrast, privately owned banks do not demonstrate similar behavior and are driven by market-based incentives. Apart from lending to “allies”, the Turkish state-owned banks generally increase lending in the run-up to the elections probably to increase business growth and consumer spending. Despite the short-term benefit for local businesses and population, it may negatively affect long-term financial stability and economic growth (Bircan, Saka 2019).

Lending to the inefficient and backwardness symptom. Overall, state-bank lending is less effective and more politically motivated being associated with lower economic growth. As a rule, countries with more state ownership in the banking sector have less developed economic and financial systems. A considerable part of government ownership in the countries of lower economic development results in slower development of the financial credit system and weaker economic growth (La Porta et al. 2002; Micco et al. 2006; Dinç 2005).

Ukraine has a rich history of using state-owned banks to pursue narrow political interests, or abuse of power. For instance, Oschadbank had numerous problems relating to repayment of loans issued to politically affiliated businesses. Or, in 2008-2010, when Oschadbank and Ukreximbank actively issued loans to the state-owned company Naftogaz that was loss-making at the time. This resulted in Oschadbank sustaining losses too. There were also cases of involving Oschadbank in unlawful enrichment schemes or using it for mass payments to the population on the initiative of individual politicians.

Lower competition. Another problem of state-owned banks is their influencing market mechanisms. Being state-owned and having access to state treasury are considerable market advantages. This means that the market players having no such privileges find themselves in a worse situation. Using the privileges their status provides the state-owned banks have less incentive to compete, as well as improve and develop.

What kind of state-owned banks should be privatized and why

The answer depends on the type of a state-owned bank and whether it generates a unique social benefit that could not be generated by the private sector with less risk and higher development incentives. Governance standards in state-owned banks should match those in privately owned banks.

For instance, postal banks that provide financial services to people regardless of their place of residence often remain state-owned since they have an important social function. Therefore, Ukrposhta’s provision of certain financial services is fully justified.

Development banks can be instrumental in financing innovative or infrastructure projects that face a shortage of private financing due their scale or considerable risks. However, their outcomes largely depend on the quality of governance. The only state-owned bank partially pursuing development oriented objectives is Ukreximbank. Presently, the functions of development banks are fulfilled in Ukraine by international financial organizations such as the World Bank, EBRD, European Investment Bank, etc. They lend to development initiatives, infrastructure or entrepreneurial projects using the financial infrastructure of Ukrainian banks, both public and private.

VoxCheck training program on the identification of hostile narratives in Telegram

VoxCheck training program on the identification of hostile narratives in Telegram