"Got any complaints about Batska?" Pro-Russian media manipulations, November 8-14

“Got any complaints about Batska?” Pro-Russian media manipulations, November 8-14

This week, topic number one in the information space was the migration crisis at the Polish-Belarus border of the self-proclaimed President of Belarus Alexander Lukashenko’s making, in order to respond to EU sanctions. Pro-Russian media in Ukraine also reported on the position of the European Union and Poland. However, their analytical publications disseminated messages of Lukashenko’s innocence, a natural increase in the number of migrants, and the aggressiveness of Polish security forces. But it was not just Belarus: pro-Russian websites once again spread fake stories about “forced Ukrainization.”

Shuffling things around: they did not create a crisis on purpose but “ceased to contain migrants.”

According to pro-Russian media’s most common manipulative message, Alexander Lukashenko did not deliberately orchestrate the migration crisis at the borders of Poland and Lithuania. Belarusian authorities arguably deterred migrants flocking in large numbers to the European Union since 2015. But when the EU imposed sanctions on self-proclaimed President Lukashenko, Minsk decided not to “contain the influx of migrants.”

“…The situation looks somewhat different in the Western media. Belarusian authorities used to restrain the activities of private travel companies that brought in migrants under the guise of tourists, but they’ve stopped doing that now. Hence the thousands marching to the Polish border,” Strana writes.

Investigative journalists began writing in August about Belarusian authorities’ direct involvement with the migration crisis. According to a joint investigation by Dossier and the German newspaper Der Spiegel, the Belarusian state-owned company Tsentrkurort has coordinated the influx of illegal migrants from Iraq to Belarus since the spring of 2021. It is a travel company that is part of the Belarusian presidential administration. Visas were issued to Iraqi citizens under the guise of doing Tsentrkurort tourist tours. Migrants were accommodated in hotels, from where they headed for the border with Lithuania.

The BYPOL initiative, founded by former Belarusian officers who retired from service after the presidential election and were forced to leave their country, published their own investigation. According to the Initiative, the Belarusian authorities used the operation “Gateway”, prepared in 2010-2011, to smuggle migrants to the EU’s borders.

A significant gap in statistics also makes the version of “simply ceasing to contain migrants” extremely unlikely. Over 4,000 illegal migrants have been detained at the Lithuania-Belarus border in 2021, which is 50 times more than in the whole of last year. In August, Belarus further increased the number of flights from Iraq and began receiving flights from Sulaymaniyah, Basra, and Erbil.

By the way, Lukashenko personally threatened to hold off on guarding the borders in response to EU sanctions against Belarus when the EU closed its airports to Belarusian planes and banned flights over Belarus (it happened after Belarus used force to make a Ryanair plane land in the country to detain the founder of the Telegram channel NEXTA). “We used to stop drugs and migrants, but now you’re going to catch them yourself. We’re not blackmailing anyone, and we’re not threatening anyone, [but] you put us in those conditions where we’re forced to respond. So, we’re responding. Well, I’m very sorry, but we do what we can,” Lukashenko said.

Speaking on Nash, Petrovsky said: “Before these sanctions, the Republic of Belarus was busy ensuring the security of the European Union’s borders. All migrants were detained and sent back to their homeland at our own expense – at the expense of the Belarusian budget. And not just a hundred migrants.”

According to Frontex (the European Border and Coast Guard Agency), less than 1% of illegal migrants entered the EU through the EU’s 6,000 km land border with Ukraine, Belarus, Moldova, the Russian Federation, and its eastern member states. Most of them chose sea routes.

With the maximum influx of refugees in 2015, only 1,927 illegal border crossings were recorded on the EU’s eastern border. In the same year, 764,033 people used the Western Balkan Route to get to the EU illegally, and 885,386 thousand used the Eastern Mediterranean Route. The Center for Strategic Communications and Information Security explains that compared with 2020, the number of illegal crossings at the eastern border increased by 1,407%. It can hardly be a coincidence.

Another manipulation is to argue that the version about Lukashenko’s involvement with the migration crisis was made up by the Belarusian opposition to justify the actions of Polish authorities. Strana writes: “Yesterday the EU spent the whole day putting all the blame on Lukashenko. They argue that he deliberately lures Asian migrants into Belarus and brings them to the Polish and Lithuanian borders to wage a “hybrid war.” This version is being disseminated by the Belarusian opposition to justify the behavior of the Polish government, which is even ready to use weapons to protect their country’s borders from refugees.”

The “trace” of the Belarusian opposition members was also seen in Klymenko Time (a media outlet controlled by Oleksandr Klymenko, former Minister of Revenue and Duties of Ukraine from “the Yanukovych family”). 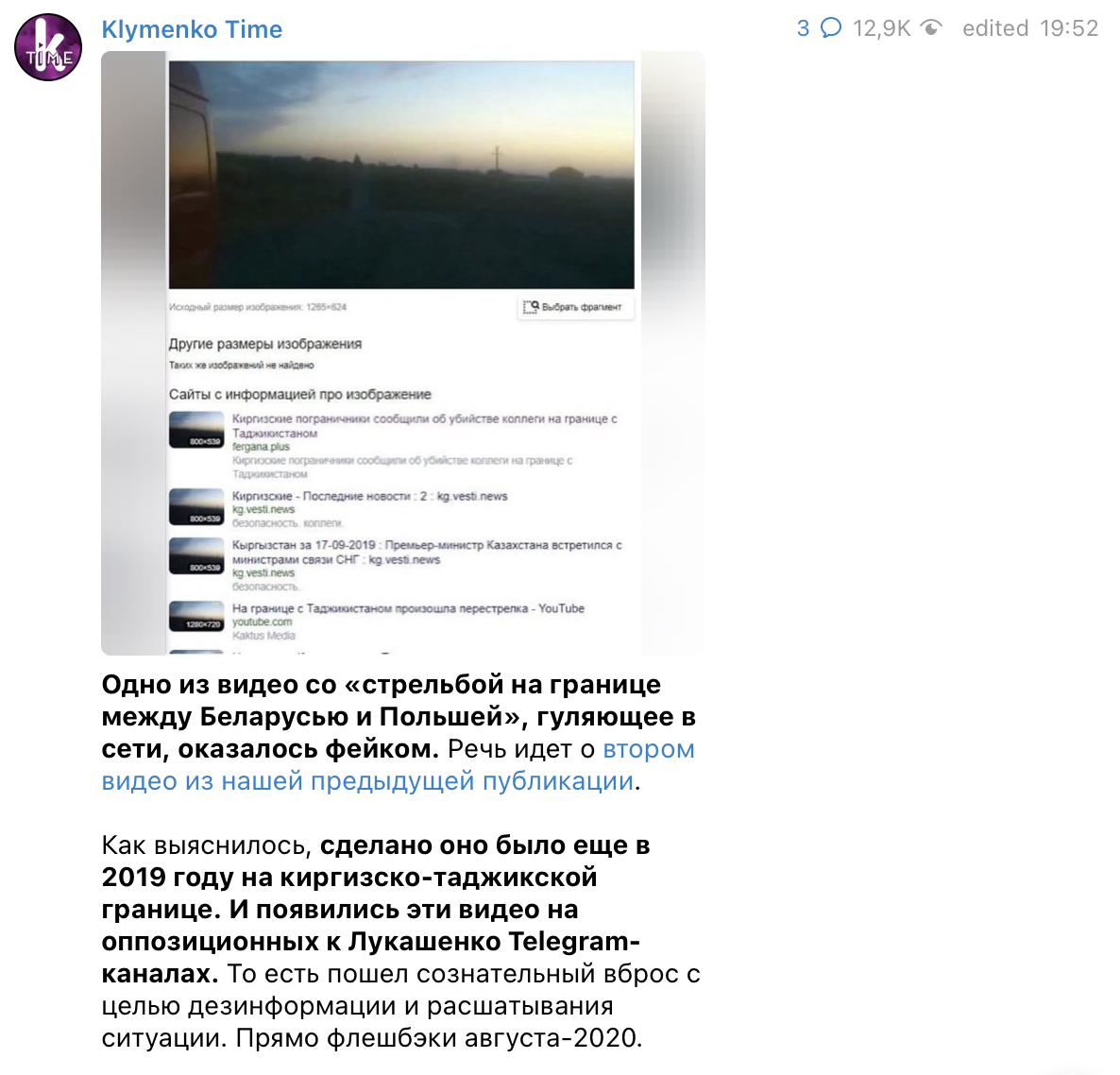 TRANSLATION: One of the Internet videos of “shooting at the border between Belarus and Poland” was fake. We are talking about the second video from our previous publication.

It turns out that it was filmed back in 2019 at the Kyrgyz-Tadjik border. The videos were posted on Telegram channels opposing Lukashenko. That is, we see the deliberate planting of evidence and attempts to shake up the situation.  Those are like flashbacks from August 2020, really.

August 2020 marks the beginning of mass protests in Belarus against the self-proclaimed President Lukashenko. The protesters took to the streets because they thought the election results were rigged. Supporting the myth of “people’s love” for him, Lukashenko said at the time that the country’s protests were orchestrated from abroad. And that foreign states were instigating the protesters to change the government. Hence the narrative, flirting with Belarusian propaganda about a “coup” and “shaking up the situation,” and the discrediting of opposition forces arguably run by the West. It closely resembles the Russian media’s statements about the Revolution of Dignity, doesn’t it?

After Lukashenko’s inauguration, the European Union, the United States, the United Kingdom, and Canada did not recognize his legitimacy. Only Turkmenistan and China did.

In addition, since the beginning of the migration crisis, Russian and Belarusian media outlets have been widely disseminating reports on the brutality of the Polish side (e.g., BelTA, Radio Sputnik, TASS, Russia-1, Gazeta.ru, Izvestiya, etc.). In most cases, the publications refer to the State Border Committee of Belarus. There is no confirmation of this from Poland or the EU. According to the Polish Ministry of Defense, migrants are sent to the border in an organized manner by Belarusian special services.

Similar reports were disseminated by pro-Russian media in Ukraine, arguing that Warsaw “uses loudspeakers, searchlights, and stroboscopes to exert psychological pressure. It ignores requests to help people who are on Polish territory, right near Polish fence posts” and, meanwhile, Lukashenko is providing humanitarian aid and “humane assistance.”

However, Belarusian journalist Tadeusz Giczan tweeted that it was Belarusian security forces that used lasers and stroboscopes to temporarily blind Polish soldiers and help migrants rip out fence posts to cross the border.

Nash did not fail to bring back the eternal Russian propaganda narrative that it is a failure of EU migration policy, not an artificially created crisis. “In the context of the deteriorating situation, it if, God forbid, worsens further, they’ll show the European Union in all its beauty, in its tolerance, in its attempts to teach us democracy, accept migrants, and overall reveal the complete failure of the European Union’s migration policy,” political “expert,” Olena Diachenko said on-air.

VoxCheck discussed the goals and information support of hybrid aggression against the EU at a joint briefing with the Center for Strategic Communications and Information Security.

Fake language news again. “For half of Ukrainians, the native language is Russian”

This week, the state language protection commissioner, Taras Kremin, gave an interview for Segodnya. The language ombudsman was asked how to deal with opponents that often talk about forced Ukrainization, to which Kremin replied: “I have no opponents but outright enemies of Ukraine.” This rather radical statement provoked a stormy reaction from some pro-Russian media outlets and became grounds for a series of manipulations. The pro-Russian (and Russian) media outlets refer to the ombudsman as “Sprechenführer,” alluding to the connections between the language policy and fascism.

For instance, a Klymenko Time video blog argued that “Russian is the native language for half of Ukrainians.” Furthermore, they got lost in sociology later in the video, stating that “every third Ukrainian continues to consider Russian their language, and the government’s policy aggressive and unfair.”

In reality, a recent poll conducted by the Ilko Kucheriv Democratic Initiatives Foundation found that 78% of Ukrainians consider Ukrainian their mother tongue and only 18% chose Russian. 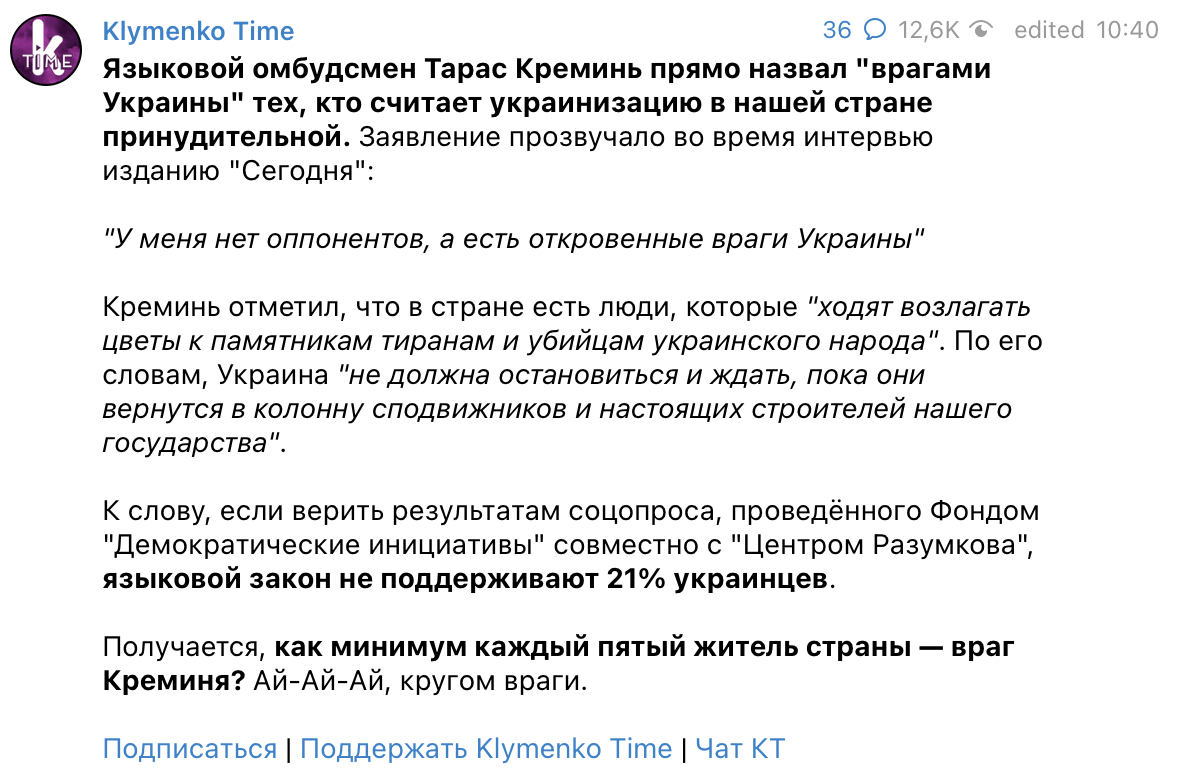 TRANSLATION: The language ombudsman Taras Kremin directly called the “enemies of Ukraine” those who think Ukrainization in our country is forced. He stated so during his interview with Segodnya:

“I have no opponents but outright enemies of Ukraine.”

Kremin said that there are those in the country who “go to lay flowers to honor the tyrants and murderers of the Ukrainian people.” According to him, Ukraine “shouldn’t stand there waiting until they return to the column of supporters and real builders of our state.”

By the way, if we can trust the poll results received by the Democratic Initiatives Fund jointly with the Razumkov Center, 21% of Ukrainians do not support the language law.

So, it turns out that at least every fifth resident of the country is Kremin’s enemy. Tsk, tsk, tsk, you can’t swing a cat without hitting an enemy.

VoxCheck searches for fake news stories and manipulations to debunk them. The “click and check” method lies at the core of our fact-checking. Anyone can check our argumentation and sources. Fact-checking can only be based on open data with relevant links. A fact-checked article can only be published if signed by two members of the editorial board.