According to the State Statistics Service, in Ukraine 31% of women aged 25-34 are economically inactive. The main reason for this is family care. At the same time enrollment rate at kindergartens for preschool age children is only 55% and kindergartens appear to operate at full capacity. Will an increase in preschool care availability have a significant positive effect on mothers’ employment? Or perhaps the availability of retired grandparents who can take care of grandchildren will help young mothers to join the labor force? This was the topic of the MA thesis of Anna Pylypchuk, 2018 KSE graduate. 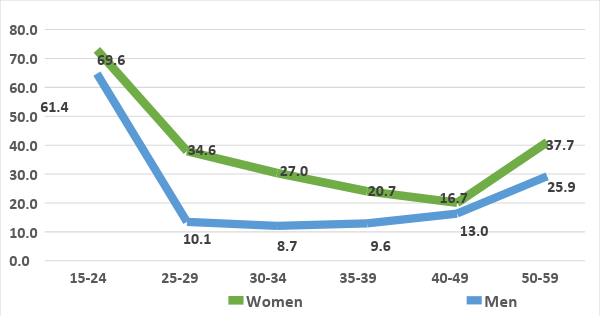 According to the report, the main reason for not participating in labor force for women aged 25-34 is family care (almost 90%), while only 30% of men of the same age indicate family care as a reason for economic inactivity (Figures 2 and 3)

Figure 2. Reasons for inactivity of men. 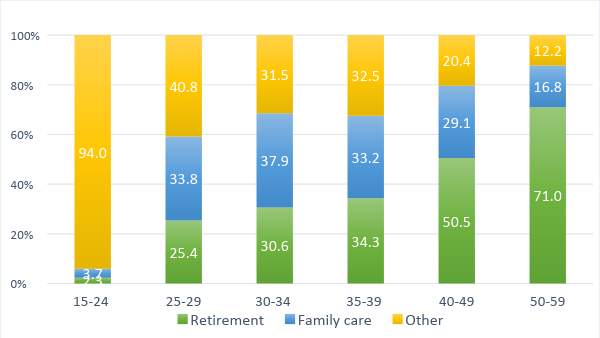 Figure 3. Reasons for inactivity of women. 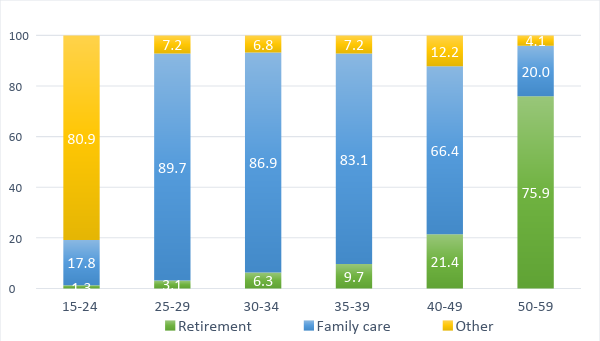 This situation is not unique for Ukraine. A recent analysis of the European Institute for Gender Equality (2017) shows that a shift to a more equal distribution of unpaid care work is one of the main preconditions for realizing gender equality and increasing fertility rates in the future. Over the past decades, many advanced countries experienced the decline in fertility rates combined with the increase in female labor market participation. Nowadays the situation has changed, and many OECD countries show a positive correlation between birth rate and female employment – higher rates of female employment go together with higher birth rates. This is explained by higher security of earnings in times of higher employment opportunities (Da Rocha, J. et al., 2006).

Traditionally, women had to choose between work and family. Availability of different types of childcare softens this choice and allows women to join labor force without completely sacrificing personal aspects of life. Many studies show that lack of high-quality accessible childcare places significant constraints on female labor supply and is among the key factors that weaken women’s labor market attachment (e.g. Chevalier, 2002).

Childcare services in Ukraine can be divided into three major groups:

We explore the impact on mothers’ labor supply of two most frequently used in Ukraine types of childcare – public and informal childcare services. In line with the literature we expect to see a positive effect of retired grandparents living in the same household on mothers’ labor supply. Kindergartens nearby are also expected to have a positive effect.

To examine the impact of different types of childcare on mothers’ labor supply we use the data from the Ukrainian Longitudinal Monitoring Survey – 2012 and the State Statistics Service Report (2013).

The results for Ukraine (see Annex) are different from those predicted by the literature – retired grandparents have a negative association with mothers’ employment. In particular, the likelihood of working for a young mother living in the same household with a retired grandfather is 24% lower than for mothers who live without grandparents. The only positive effect of grandparents on mothers’ labor supply is observed for employed grandmothers. Living with a working grandmother increases the likelihood of mother employment by 9%.

Household income is a very important predictor of a mother’s decision to join the labor force. With higher family income the likelihood of women with young children to join labor force declines and mothers spend their time taking care of children and housework rather than working.

The labor force of young mothers in Ukraine has a few peculiarities compared to other countries. First, contrary to the literature, the level of education has no effect on the likelihood of mothers’ employment. For example, Muench et al. (2009) estimated female labor force participation in 23 EU countries over the period of 1995-2008 and found that tertiary education had a strong significant and positive effect on participation rates in all age groups. Absence of a similar effect in Ukraine suggests lower opportunity cost of non-working for young mothers. One of the reasons may be the age of mothers – 64% of females in our sample are under 30 years old, so they lack experience to have a highly-paid job even if they have tertiary education. Second, the type of settlement in which a household is living is an insignificant predictor of mothers’ employment. Thus for young mothers with children under 6, even more abundant opportunities of employment provided by big cities appear to have no effect on the probability of employment.

Employers in Ukraine consistently complain about shortages of qualified workers being a limiting factor. Thus, to ensure high economic growth, policymakers should implement programs to raise labor force participation, especially for population groups where the pool of economically inactive people is large. The available evidence suggests that higher availability of childcare services is not enough to increase mothers’ labor supply in Ukraine. Instead, the household composition, namely, older members of households living together with a young family, has a crucial impact on female labor supply. A clear implication of this institutional setup in Ukraine is that we need to increase the supply of grandparents available for childcare services which would be hard to achieve without improving Ukraine’s healthcare system for the elderly.

Chevalier A. & Viitanen T. K. 2002. “The causality between female labour force participation and the availability of childcare”. Applied Economics Letters, 9:14, 915-918.

European Commission. 2013. Barcelona Objectives. The Development of Childcare Facilities for Young Children in Europe with a View to Sustainable and Inclusive Growth. Report from the Commission to the European Parliament, the Council, the European Economic and Social Committee and the Committee of the Regions. Luxembourg: Publications Office of the European Union.

State Statistics Service of Ukraine. 2013. Preschool education in Ukraine in 2012.

State Statistics Service of Ukraine. 2017. Economic activity of population in 2016.