Since the beginning of October, the dollar has risen by 55 kopecks against the hryvnia. Does this mean that the hryvnia is finally losing steam? We do see growing supporting evidence. The more than $4bn of foreign investment that has flowed into government local-currency bonds has provided powerful support for the hryvnia this year. At the same time, it has significantly weakened the effect of seasonal factors on the domestic FX market. But these seasonal factors still exist and are ready to reassert their influence as soon as foreigners’ demand for government paper cools. 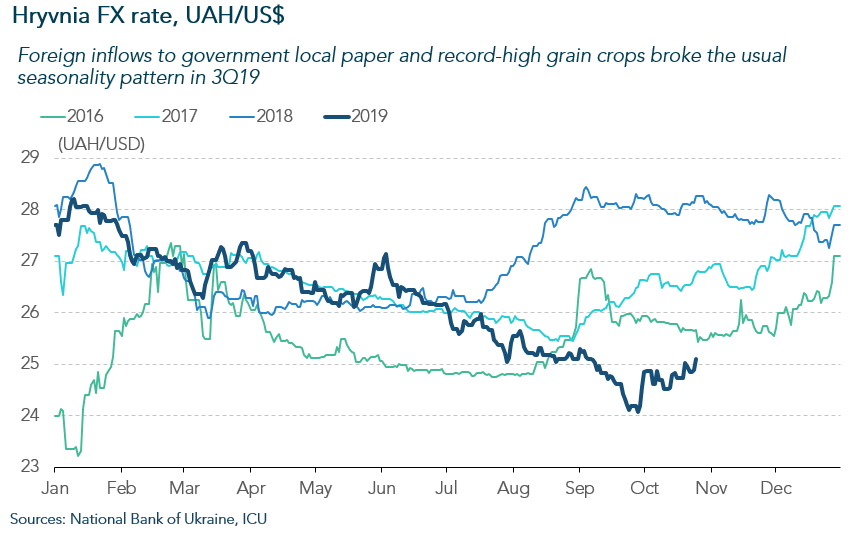 One of the key factors that weighed on the hryvnia in early October was foreign investors’ declining holdings of Ukrainian government local-currency bonds. The decline followed a hefty placement of government five-year UAH-denominated notes of more than $0.5bn at the end of September. Foreigners purchased the lion’s share of this placement. The government has decided to make that placement of five-year notes the last one this year, having achieved its issuance targets for this instrument. As a result, the share of long-term instruments that enjoyed the highest demand among non-residents will decline substantially in 4Q19. 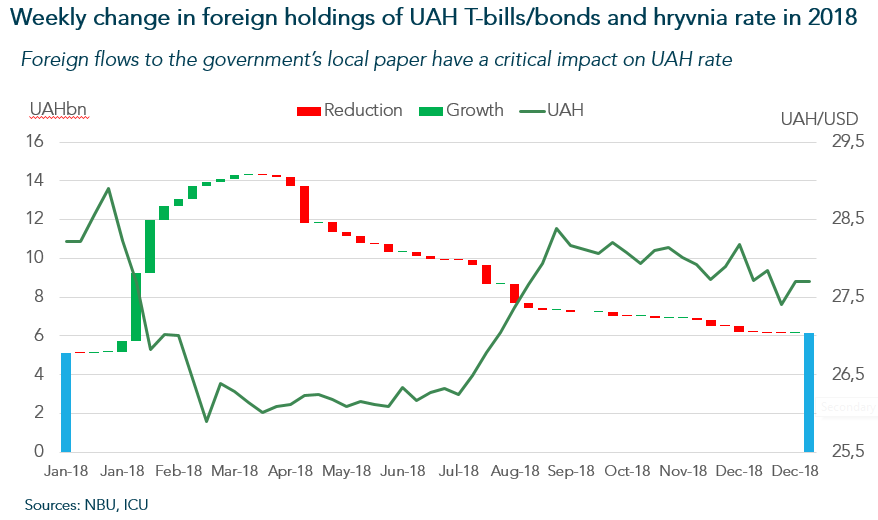 Overall, in 4Q19, the Ministry of Finance plans to borrow another UAH50bn. Excluding planned hard-currency borrowings, the volume of newly issued government bonds could amount to UAH30bn. It is most likely that foreign investors will buy most of this volume. Nevertheless, this increase in their UAH bond holdings will be much smaller than the UAH45bn their portfolios grew by in 3Q19. The resulting slowdown in the growth of foreigners’ portfolios will mean less support for hryvnia demand. 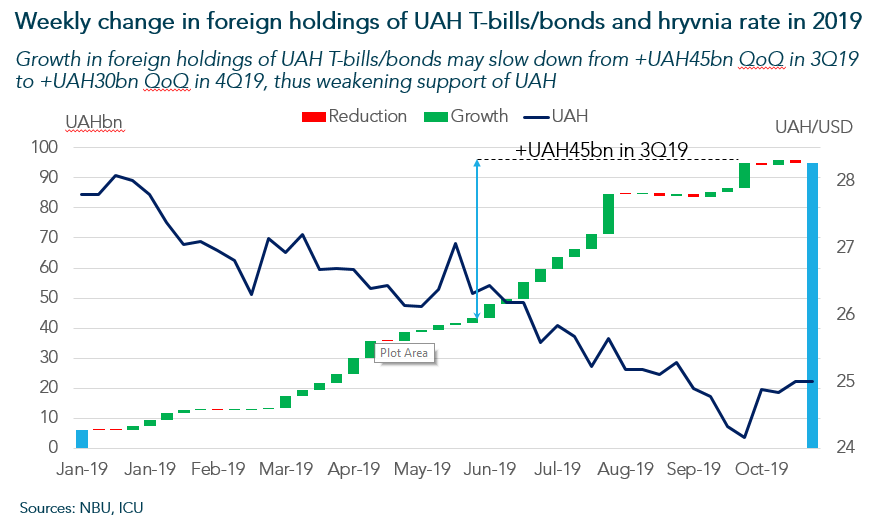 The positive effect of exports is diminishing

In the coming months, the hryvnia should also see less support from the two key sources of Ukraine’s FX revenues: exports of agricultural products and steel. In both cases, there will be mounting pressure from seasonally lower shipments.

In addition to the coming winter season, conditions in the steel market are deteriorating due to the trade conflict between the US and China, and the overall slowdown of the global economy. Prices for Ukrainian export steel have fallen by more than 25% over the last three months, and will continue to bring down export earnings. 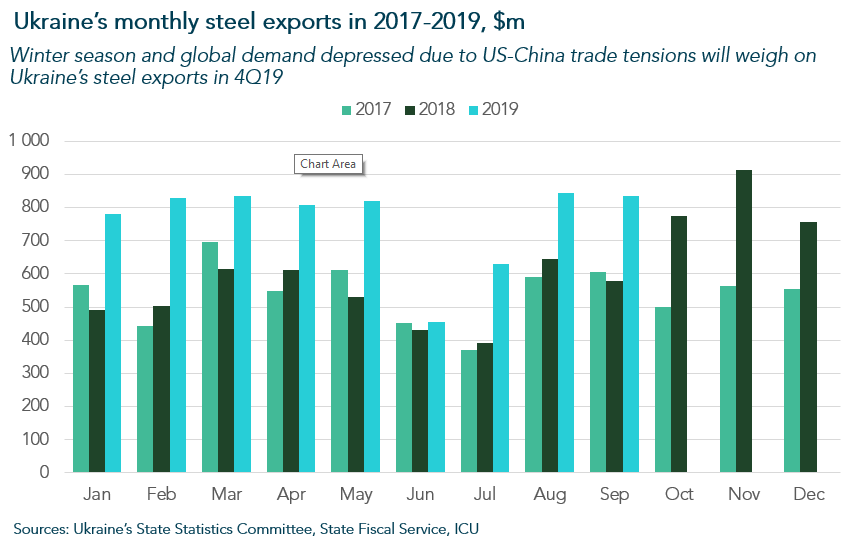 The grain-price outlook is better, but still mixed. While corn prices keep gradually recovering from their almost 20% drop in 3Q19, wheat prices are likely to correct downward due to abundant supply and larger crops in Europe. Ukraine also benefits from a good grain harvest, which is expected by the Ministry of Agrarian Policy and Food to grow more than 2% to a record high of 71.8mt in 2019. Market watchers, correspondingly, expect Ukrainian grain exports to rise 5% to 50mt for the 2019/20 (July-June) marketing year. While Ukraine has so far increased its 2019/20 grain exports by 39% to 15.4mt as of mid-October, the pace of shipments should slow by year end. 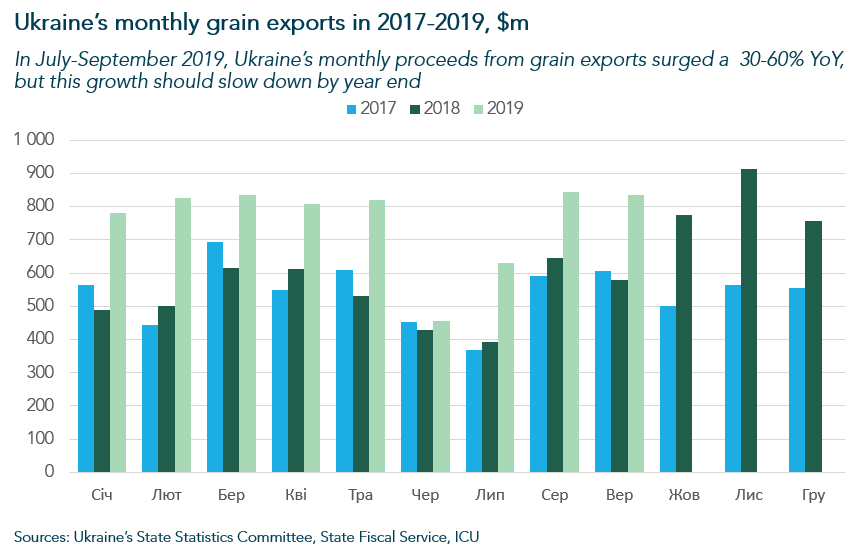 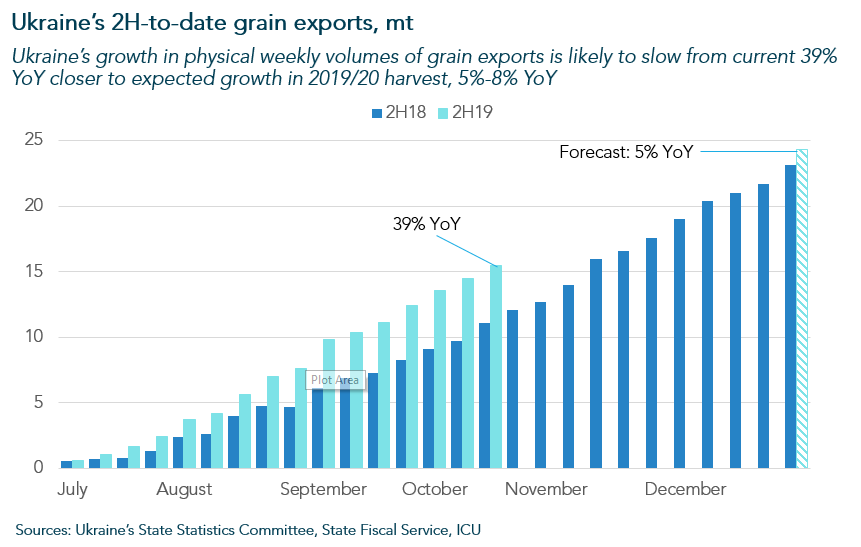 With the end of the year approaching, rising imports will also increasingly press on the hryvnia. According to the latest two-year history, growth of retail turnover and restocking may cause a 20–25% QoQ surge in the volume of consumer imports in the last quarter of the year. Rising household incomes are giving additional impetus to this trend: in the first nine months of 2019, consumer imports grew by 13% YoY. In the last three months of the year, this growth is unlikely to slow down significantly. 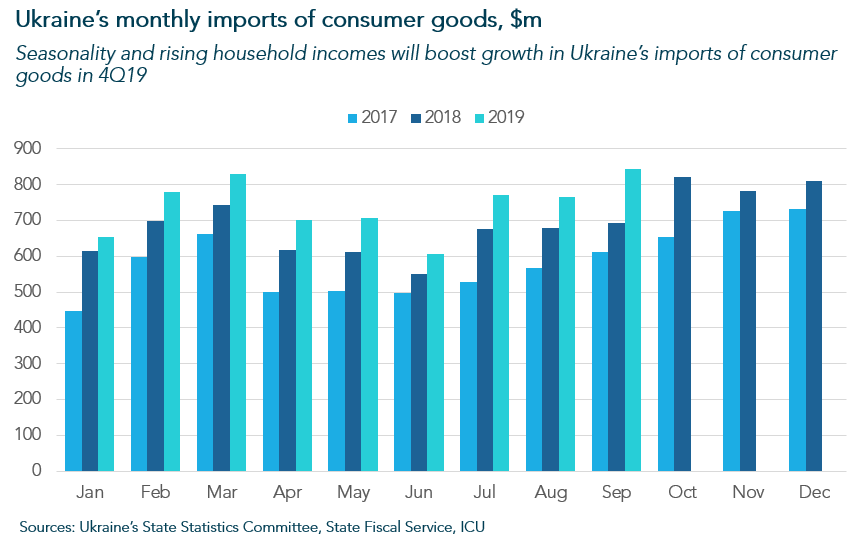 Behaviour of foreign investors is a key wild card for the hryvnia outlook. Sentiment in global financial markets and risk tolerance toward Ukraine’s investment case are both critical for the government local-paper market. Regarding the internal situation, the Privatbank issue remains unsolved, and Ukraine’s new deal with the IMF is still pending. On the other hand, if the government decides in 4Q19 to move on with additional issuance of hryvnia-denominated notes with long maturities, foreigners’ demand is likely to be high, and may prop the hryvnia above the market’s expectations.

Strong and unpredictable pressure on the hryvnia may also result from the payment of dividends by Ukrainian subsidiaries to foreign parent companies, especially since all restrictions on dividend repatriation have been lifted. ArcelorMittal Kriviy Rih’s Supervisory Board has approved payment of $430m dividends out of 2015–18 earnings during the period from November 2019 to March 2020. The amount is about one and a half the average daily trading volume on Ukraine’s foreign exchange market. Although protracted over time, dividend payments will not necessarily be made in equal instalments. Overall, retained earnings of the biggest players in Ukraine’s metals and mining sector alone amounted to more than $10bn as of end-2018. Having their dividend policies built mostly on an ad hoc basis, other Ukrainian companies may also decide to ramp up dividend payments abroad while dollar pricing remains relatively attractive.

Most likely, the dollar has already bottomed out versus the hryvnia this year. In recent years, September and October were the critical months when seasonal expansion both in the trade deficit and current account deficit led to significant hryvnia depreciation. This year, massive foreign inflows in government local debt broke this seasonal trend. Nevertheless, we think that the trade deficit this year will receive additional support from the weaker global economy and rising domestic consumer demand and will keep expanding in November–December. With smaller volumes of government local paper purchased by foreigners, in our view, this will press the hryvnia to levels close to UAH26/USD by the end of the year. The market consensus forecast has so far been more pessimistic, showing a median of UAH 26.6/USD. 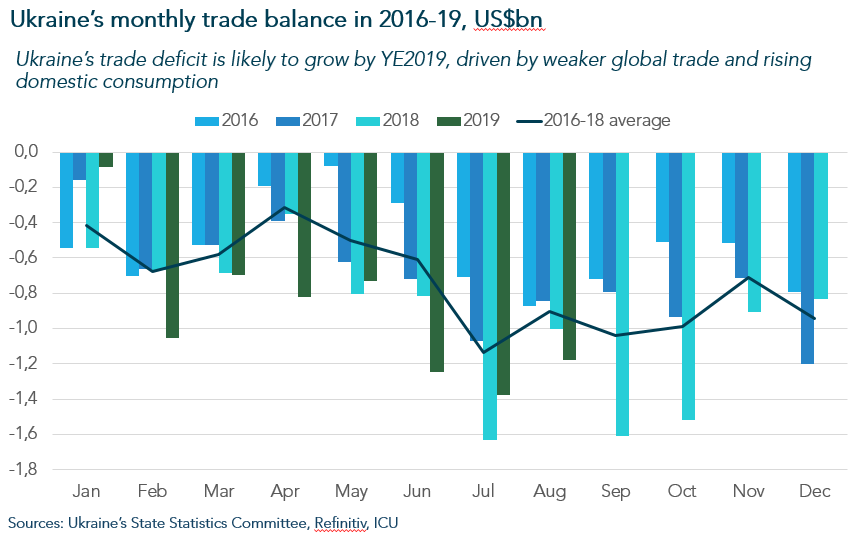 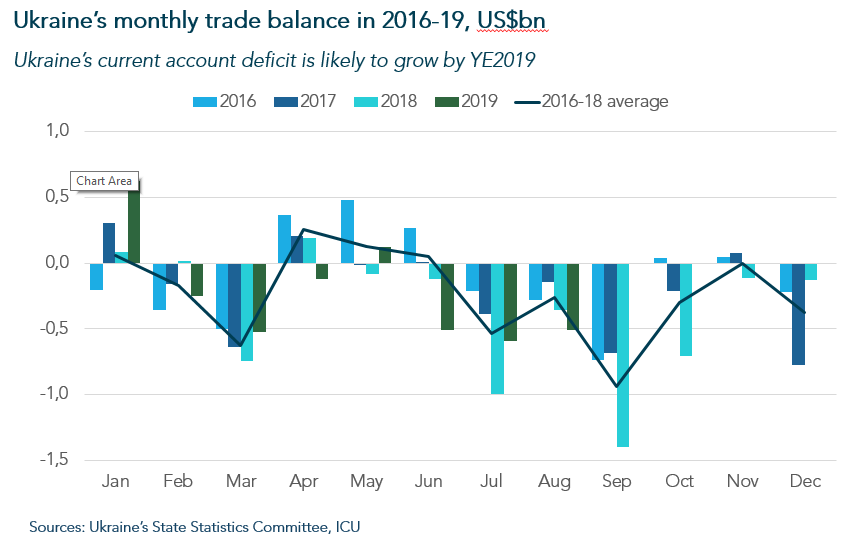 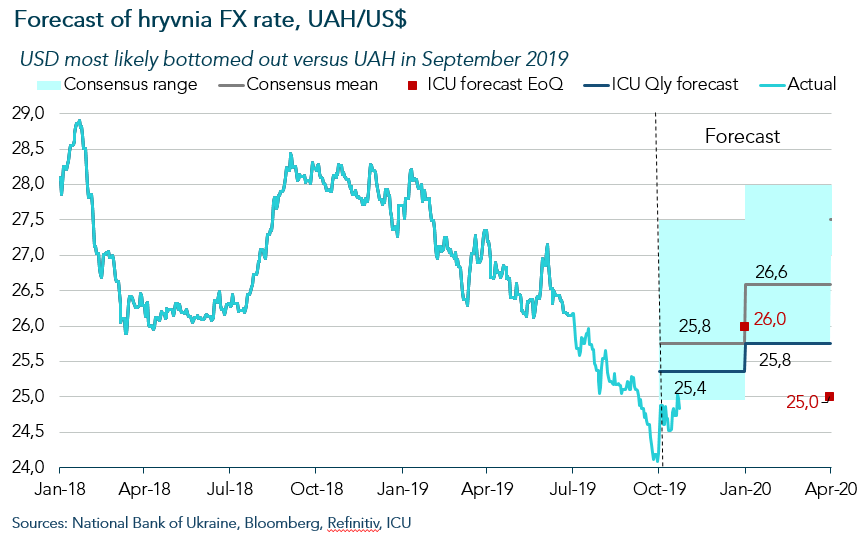