iMoRe # 49. Improvements Before The New Year: A Simplified Business Environment

The main driver of this increase was reform in business environment, and some changes that occurred in public finance and the monetary sphere. 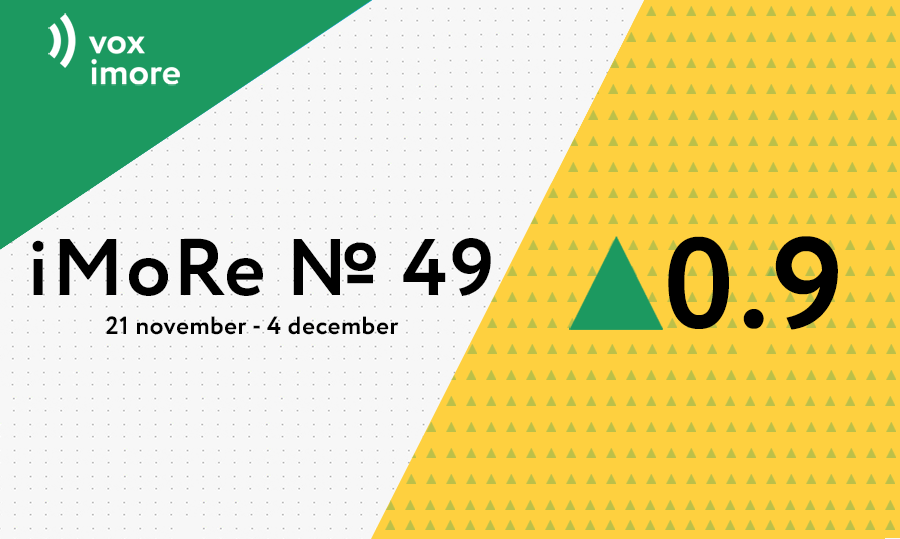 The index for monitoring reforms (iMoRe) increased slightly due to significant positive changes in the sphere of deregulation. Experts’ assessment of progress of reforms for November 21 through December 4 is +0.9 points, out of a possible +5 points. The main driver of this increase was reform in business environment, and some changes that occurred in public finance and the monetary sphere.

Among the major events that occurred during this round are the law on elimination of administrative barriers for the export of services and the simplification of the rules for obtaining a new electricity connection.

A number of reform laws have been also adopted. They reduce the regulatory impact on businesses during government inspection and regulation, empower banks to manage short-term liquidity in foreign currency, determine the rules to involve advisers into the privatization process, and strengthen the independence of the regulator in the spheres of energy and utilities services.

The Most Important Developments

1. The law on removing administrative barriers for export of services, 2.8 points

Ukraine’s legislation forced exporters of services to fulfil a number of bureaucratic procedures, which considerably complicated their work. In particular, there were requirements for providing all foreign economic agreement in writing, providing “acceptance certificate” acknowledging contract execution, translating documents into Ukrainian, as well as affixing various signatures and seals.

These requirements were particularly burdensome for small and medium businesses and freelancers. Many were forced to work “in the shadows” because it was necessary to waste a lot of time and resources for the official registration of all necessary documents.

Law #1724-VIII of November 3, 2016 simplifies the procedures for concluding foreign trade agreements, writing accounting and financial reports, abolishes mandatory deadlines for the return of foreign exchange earnings from export operations services (except for transport and insurance).

Now service exporters will be able to conclude foreign service contracts electronically. The law also allows accepting public buyout offers, exchanging electronic messages, or issuing invoices. Banks are not allowed to require documents in Ukrainian if they are issued in English. “Acceptance certificates” are no longer mandatory for both foreign operations and operations within the country. Invoices may be signed with a personal, electronic or digital signature, and only the signature of the exporter will be required.

“The law is a breakthrough in the area of deregulation. It is of great importance, especially for IT-community in Ukraine, because it makes the work of freelancers, consultants, accountants and lawyers who work with foreign customers much easier. Now, export contracts for the services may be concluded not only in writing but also electronically. Translating documents from English into Ukrainian is not mandatory.

Ukrainian service exporters will soon feel the positive impact of these new, simple and transparent rules of the game.”

— Maxim Nefedov, Ministry of Economic Development and Trade of Ukraine

“In Ukraine there are extremely complicated procedures for obtaining foreign exchange earnings from exports, which is particularly detrimental for small businesses. Difficulties in management also concern taxation and other procedures, associated with necessity in concluding foreign economic agreement in writing. Simplifying these regulations will not only provide additional inflow of foreign currency, but also create jobs and increase aggregate domestic demand.

The law should solve the problems in management of export services for small and medium businesses. Now small exporters may spend up to 10% of the contract value only to perform administrative requirements, each additional day of delay means additional costs for them.

2. Rules for electrical connection have been simplified, +2 points.

Getting a permanent electricity connection is one of the biggest obstacles for doing business in  Ukraine. These procedures are extremely cumbersome, and their cost is very high. “Doing Business” rating shows that Ukraine ranks 130th of 190 countries for the subindex “getting electricity.“

Decree #1946 of November 7, 2016, of The National Commission for State Regulation of Energy and Public Utilities introduced the transparent rules regulating fees for obtaining a new electricity connection. The fee will take into account the installation of power, the cost of building transmission lines, safety factors, and more. The decree also sets Clear requirements for technical standards of consumers’ electricity connections.

The first, but important step is to simplify getting an electricity connection that will resolve the issue of its cost. The Commission will monitor the implementation of this decree by the power companies and expects legislative changes that will resolve other issues that are not directly related to the powers of the Commission, but also affect the overall waiting period needed to actually get the connection.

— Dmytro Vovk, the National Commission for State Regulation in Energy and Utilities

The adoption of these changes reduces the possibility of connection price manipulation by power companies and establishes clear rules for the electricity market.

It should be noted that the adopted changes require corresponding changes in the Law of Ukraine “On Electric Power Industry,” according to which, for example, the cost of non-standard connection to electric grids is not determined by a formula of unit cost.

Also it is not quite clear what “the ratio of the consumer price index” means, which is used in determining the unit cost of non-standard connections.”

iMoRe #47. Reforms in Ukraine Are Put on Hold Again