iMoRe #64. Summer Is Getting Warmer, But The Reform Index Is Not

iMoRe remains low: there was a minor progress in reforming business environment and monetary sector during this period 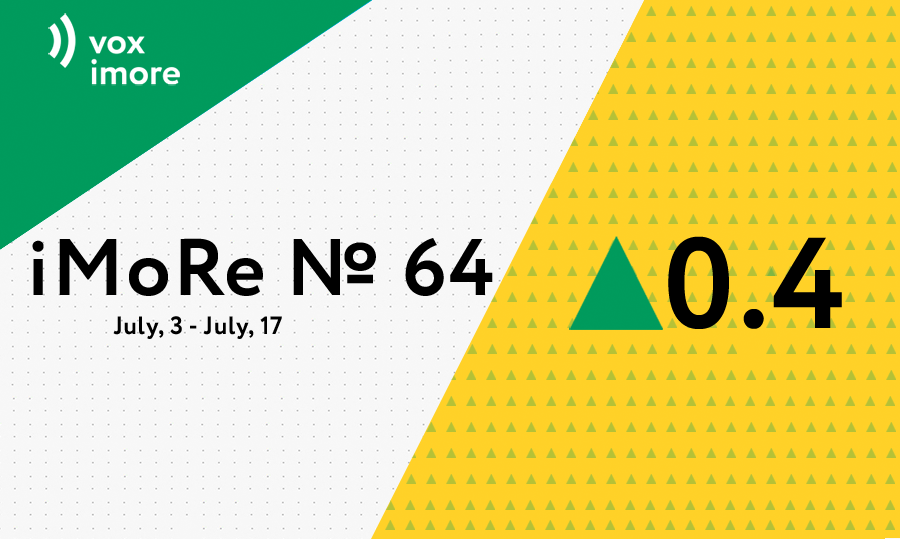 Index of reform monitoring (iMoRe) remains low: +0.4 points on a scale of -5.0 to 5.0 during the period of July 3rd- July 17th 2017 (in the previous round the index was also equal to +0.4); There was a minor progress in reforming business environment and monetary sector during this period. There were no reforms in governance, public finance and energy sectors.

Main events of this round include the law on state control of food safety standards and animal health and Central Bank decree on the usage of e-signature in banks’ cashiers offices.

Top Reform of the Issue

The law on state control of food safety standards and animal health, +2 points

Ukraine committed to ensure government control over food market operators consistent with EU regulations, when it signed the Association Agreement. This sphere is regulated strictly in the EU, since lives and health of people depend on such regulations. At the same time strict regulation may increase corruption incentives, hence laws must ensure proper control mechanism to prevent this.

In Ukraine 4 ministries are responsible for food production control. Each is controlling a separate part of the production chain but none is responsible for product safety in general. Existing laws (the new law comes into force gradually) envisage only two control points: control of the raw product and control of the finished product to ensure that they comply with government standards. However, EU regulations suggest that products must be controlled at each production stage and at the stage of supplying the product to the final consumer.

‘ The implementation of this law would have an impact on effective state control over food safety and quality standards, to ensure that they comply with European standards.

Its main advantages include: risk-oriented approach to control, coverage of the whole production chain from the field to the dinner table, which would make it possible for our producers to work complying with European rules and for consumers to be confident of the food quality and safety.

The law would also decrease the cost of official control for producers, increase the conditions of business activity on all stages of food chain and also influence the harmonization of food laws in Ukraine with WTO rules.

However, the work is not finished when the law is adopted because it is necessary to adopt a lot of acts to ensure it works fully. Implementation of this law requires developing 28 Ministry of Agrarian Policy and Food decrees and 13 decrees from Cabinet of Ministers. The only limiting factor of the law is the long period during which it comes into force.The law itself comes into force in nine months after it is published, while some of its articles only come into force in 2-3-5 years.’

— Olha Trofimtseva,  Ministry of agrarian policy and food of Ukraine

– Implementation of European control principles, such as conducting checks based on long-term control plans, which are based on risk criteria.

– effective control, for example, the possibility of conducting checks without warnings when the production is dangerous for people’s lives and health. This would strengthen the protection of food consumers.

– Fixed size of fines for violations instead of range would decrease subjectivity when deciding on the fine.

– The ability to make video recording by the producer as well as the controlling body to reduce corruption risks. Similarly, the checks would be conducted based on unified forms, acts and check-lists, and they would be only able to check things that are mentioned in such lists.

– Clearly defined responsibilities of officials, what they are required to do, accountability of the competent authority.

Some norms of the law came into force right after its publication, for example liberalization of the documents required for importing low-risk products, making trade easier. However main norms come into force 9 months after publication. We have to develop and adopt more than 40 decrees to ensure implementation of this law during this period.’

‘It is an important step in reforming food safety system, which would improve access of Ukrainian producers to foreign markets and would increase consumer protection in the domestic market.

The law introduces risk-oriented principles of food safety control which allows to use state resources effectively and decreases administrative pressure on the entrepreneurs. It is also important that only one state body is exercising control which is consistent with the best regulative practices.’