iMoRe №90. The pace of reforms is growing: investment climate improvements and the Appeal Chamber | VoxUkraine

iMoRe №90. The pace of reforms is growing: investment climate improvements and the Appeal Chamber

The index for monitoring of reforms (iMoRe) is +1.5 points for the period from July 23 – August 5, 2018. The main events of the round are the adoption of laws on the chambers of higher specialized courts due to the launch of the AntiCorruption Court, on nominee holders of securities and phytosanitary expertise. 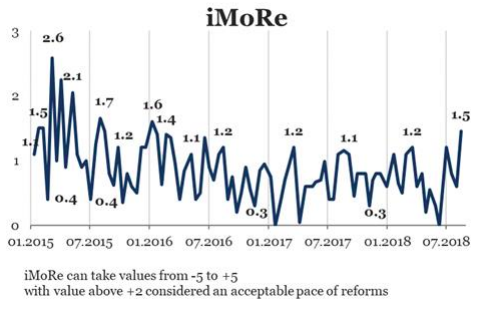 Law on the Chambers of Higher Specialized Courts due to the launch of the AntiCorruption Court, +3.0 points

The possibility of the creation of the Anti-Corruption Court (ACC) is provided by the law on the judiciary and the status of judges, which was adopted in June 2016. The Law on the ACC, which actually describes all the details concerning the establishment and functioning of the court, including the procedure for the selection of judges, was adopted by the Parliament and signed by the President in June 2018 (received +5.0 points from the iMoRe experts, see more # 87).

However, this law had a significant gap: appeals against anti-corruption cases that had received the verdict of the court of first instance before ACC was created, were to be considered by appellate courts of general jurisdiction, and not by the Appeal Chamber of ACC. Such norm made it possible to avoid punishment for a number of large-scale corruption cases, currently under investigation by the National Anti-Corruption Bureau.

This norm provoked resistance in civil society and could have hindered Ukraine’s cooperation with the IMF. In her statement, IMF Managing Director Christine Lagarde said that it’s important for the parliament to quickly approve the necessary amendments so that the anticorruption court could consider all cases under its jurisdiction, including appeals.

Law 2509-VIII of July 12, 2018 regulated the issue of appeals against anti-corruption cases. The law also established that in the composition of a higher specialized court, judicial chambers for consideration of certain categories of cases in the first instance, and the appeal chamber for the consideration of cases in the appellate instance may be formed. This formally makes it possible to create the first instance and the appellate court.

In addition, the law defines the powers of the secretary of the judicial chamber to consider certain categories of cases in the first instance, specifies the procedures for the special examination of a candidate for a judge position, regulates the activity of the Judicial Protection Service, and introduces a number of changes to the procedural law.

The Law on the nominee holder of securities, +2.0 points

In the international practice, investors are turning to global custodians to carry out operations with assets in other countries. These companies provide their clients with services in operations with stocks, bonds, other securities, currencies, etc. They administer bills, record securities, register the transfer of ownership, enter into transactions, collect information, collect and accumulate income from assets (dividends or interest), pay taxes on such transactions, etc.

Investors are not always ready to invest in securities in other countries directly, without applying to global custodian companies. This requires studying the specifics of the legislation of these countries and often the implementation of complex identification procedures. For example, in Index for Monitoring Reforms (іMoRe) Release 90 Monitoring period: July 23 – August 5, 2018 Main media partners Project partners order to invest in Ukrainian securities, it is necessary to have direct contractual relations with local depository institutions. The investor must execute complex procedures that require significant operating costs: come to Ukraine personally, submit a large number of documents for identification, etc. That is why, in order to minimize such costs and risks, investors work through global custodians.

In fact, clients entrust custodial companies to invest on their behalf in other countries, and these companies are in this case the nominee holders of their clients’ assets.

In the Ukrainian legislation, there was no term for a nominee holder, which did not allow foreign investors to invest in Ukraine with the help of global custodians. This reduced the possibilities of attracting foreign investment.

Law 2418-VIII of May 15, 2018 created the conditions for solving this problem. It defines the term of nominal holder, introduces a new type of securities account, which records the transactions of nominee holders. The law also establishes requirements for foreign financial institutions that can open an account of nominee holder. It defines particulars of the account operation and the disclosure of information about the owners of securities, the procedure for registering the transfer of ownership of securities recorded in the nominee account holder and disclosure of the holders of significant stakes in shares on the corresponding account. The law comes into force on November 24, 2018 and requires the adoption of subordinate regulations, so the inflow of investment through a new system of global custodian can be expected only next year.