Inefficiencies in the Ukrainian healthcare: do we get the value for money? | VoxUkraine

Inefficiencies in the Ukrainian healthcare: do we get the value for money?

On June 8th, the parliament started considering a package of draft laws[1] necessary to launch a full-scale healthcare reform. Several changes introduced in 2015-2016, such as medical subvention, transfer of state-level procurement to international organizations, introduction of e-procurement system Prozorro, abolishment of dependence of hospital staffing on the number of beds etc. were important prerequisites for the reform. However, the draft laws under consideration imply a paradigm shift – from financing a healthcare facility to financing a service provided to a patient (see Box 2 for an overview).

Ukraine spends on healthcare over 7 per cent of GDP, in line with many other Eastern European and CIS countries (Figure 1). Unlike in our Western neighbours but similar to CIS countries, almost a half of this spending comes from patients’ pockets.

Figure 1. Composition of healthcare expenditures (as percent of GDP) by source and share of out-of-pocket expenditures 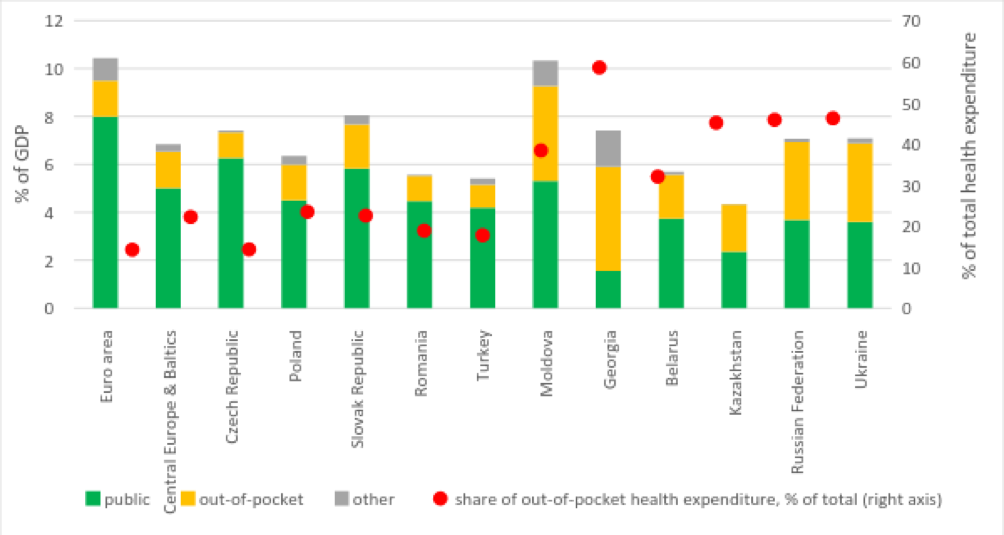 Note: out-of-pocket spending is money provided by a patient or his/her family. It does not include payments, for example, by insurance companies.

In terms of absolute healthcare spending per capita Ukraine with its low GDP is an outsider among the countries in the region (Table  1). Many blame financing for poor health outcomes – for example, in 2015 the incidence of tuberculosis in Ukraine, although lower than ten years ago, is five times higher than in Turkey or Poland and 14 times higher than in Slovakia.

Table 1. Per capita healthcare spending in Ukraine and selected countries

Taking into account a modest economic growth forecast, it is unlikely that Ukraine will be able to spend much more on healthcare in the nearest future. Therefore, it is crucial to efficiently use available resources. Kyiv School of Economics with the support of the World Bank and UNDP performed a study of Ukrainian healthcare system that allows to discover inefficiencies in it and their causes. Below we present some of the findings of this research.

The decentralization reform works as expected, i.e. health facilities in “richer” raions/cities are financed better since they get additional provisions from local budgets. At the same time, this creates unequal access to healthcare for people living in different regions. Thus, practically all the surveyed physicians-managers indicate that medical subvention[2] is enough to cover by and large only salaries and utilities, and whatever is left is spent on the most necessary drugs. Capital expenses, such as renovation and purchase of equipment, are financed either from local budgets (if they have funds) or by donors (businesses or international organizations).

Until very recently, facilities had very little incentives to save money – till 2017 transfer of funds between budget codes[3] required approval of a local council, and until 2015 they had to return any unused funds to the Treasury. At the same time, they never properly planned their revenues and expenses – overregulation of the planning and spending process deprived facility managers both of the right and opportunity to do [strategic] planning. The majority of the surveyed  facilities simply adjust last-year budget to the new prices. Only one facility in our sample forecasts the number of patients using long-term statistical trends. The survey results suggest that it may be hard for facility managers to adjust to the autonomy provided[4] to them recently – thus, 80 percent of physicians-managers still rely on the methodology defined by the Ministry of Health Order 33[5] in planning their staffing schedule.

Capital spending is performed on an ad hoc basis since facility managers do not know in advance whether local administration and/or donors will provide them with the money for this purpose. Thus, they cannot plan development of their facilities for a few years ahead.

Absent and/or obsolete equipment is a large source of inefficiency in the healthcare system. Early diagnostics is key to efficient treatment but with poor or absent equipment physicians are not able to provide it. They often have to send patients to other facilities (either private or higher-level public clinics) to undergo needed tests  – and for some patients private clinics are too expensive.

This is one of the reasons why neither doctors nor patients respect the entry point – some patients prefer to apply to hospitals which have at least some basic equipment rather than to their local polyclinic or family doctors. The practice of treating out-patient patients in in-patient departments is quite common. Other reasons behind this practice include personal arrangements with a doctor (e.g. a patient was treated at this hospital before or someone recommended a patient to apply to a particular doctor). It also extends to patients arriving at hours when a polyclinic does not work, patients who traveled a long distance to this facility, and even patients who do not want to wait in lines in polyclinics. Such practice results in wasting of resources of tertiary and secondary level facilities on patients who could be treated at the primary level.

Surveyed primary-level physicians say that since they are not supposed to provide drugs to patients, poor people do not apply to them because they will not be able to buy prescribed treatment anyway. Thus, they are admitted to hospitals when their condition gets serious enough. The programs of reimbursement of some drugs[6] are expected to reduce the number of such cases and treat certain illnesses at an early stage.

We can assume (although without a reliable evidence) that doctors admitting patients whom they are not supposed to admit do this for some [unofficial] remuneration. This form of corruption and inefficiency is nourished by low[7] official salaries in the health sector that are unrelated to performance.[8]  Doctors were asked “What would be a decent salary for a person in your position in order to work at this facility without additional employment?” Median answer for this question was UAH 8000 at the primary level, UAH 10000 at the secondary level and UAH 15000 at the tertiary level (see also Figure 2) which is quite low given the level of responsibility of a doctor but nevertheless much higher than current official level of wages in the sector. 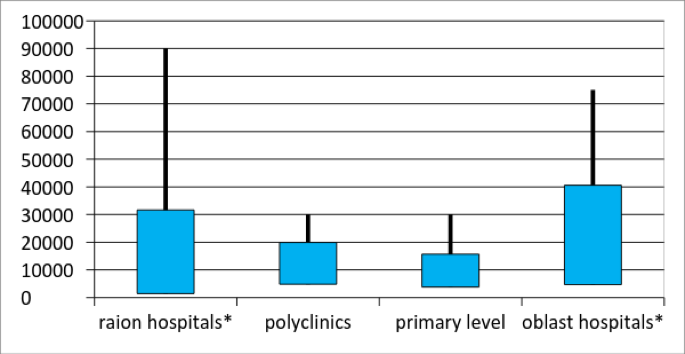 Note: blue rectangles present mean ± 1 st.dev., lines present min and max. *the diagram does not include and outlier of UAH 180000 per month.

Given this low level of salaries, over a third of physicians in Lviv and Poltava oblasts and about 20% in Donetsk and Luhansk oblasts have additional employment – usually this is employment at another state or private clinic, although some doctors work at non-medical jobs.

On average, physicians spend about 30% (and some up to 60%) of their time on paperwork not directly related to treatment of patients (writing reports, filling in the journals of drugs use etc). Over 50 per cent of doctors think that they could provide better care to patients if this work was done by someone else. Would provision of computers increase reduce doctors’ time spent on paperwork? The answers are mixed – for some physicians the answer is yes, for others provision of a computer created additional workload since they have to first write down the information and then type it into the computer. Some doctors lack computer skills. To sum up, introduction of electronic cards and electronic admission system will both save doctors’ and patients’ time and improve respect for the entry point but it should be accompanied by computer literacy trainings for doctors who require it.

Practically all the surveyed health workers complained about insufficient healthcare financing. Some facility managers estimated that patients cover up to 60 or 70 per cent of the cost of treatment – they usually buy drugs and medical supplies, except for the urgent cases.

Today, hospitals have rather few opportunities to earn additional funds – they provide a limited range of fee-paid services and sometimes rent out premises. However, there exists a parallel system of healthcare financing which includes charitable accounts to which patients and donors can contribute, and unofficial in-kind or cash contributions. Charitable funds can cover up to 30% of facility expenses, and in some cases “charitable” contributions are just a replacement of a service fee. Existence of this parallel financing system potentially creates unequal access to healthcare since not all patients may be able to pay them (although physicians say that these contributions are voluntary, this may not always be the case).

Healthcare reforms which are currently under consideration are expected to provide healthcare facilities with more autonomy, to bring the shadow out-of-pocket payments to light and generally to improve efficiency of healthcare provision.

Belli, Paolo, Yuriy Dzhygyr, and Kateryna Maynzyuk. 2015. How Is It Working? A New Approach to Measure Governance in the Health System in Ukraine. Washington, DC: World Bank. http://health-rights.org/index.php/cop/item/how-is-it-working-a-new-approach-to-measure-governance-in-the-health-system-in-ukraine

Where the money goes and how to get more with scarce resources in the Ukraine’s health care. Results of PETS/QSDS survey In Lviv, Poltava oblasts and government-controlled areas of Donetsk and Luhansk oblasts (forthcoming)

[1] One of them was approved in the first reading.

[2] Medical subvention was introduced in 2015 within the framework of the decentralization reform. The size of the medical subvention for each oblast, raion, city and community is defined based on the area population, its age and gender structure, incidence of diabetes and HIV and some other parameters.

[3] For example, if there are some savings on utilities, a local council should approve spending of this money on drugs.

[5] The Order that linked the number of personnel to the number of beds. It was not mandatory since early 2016 and cancelled since September 2016, although some facility managers say that control-revision department still checked implementation of this Order in 2016.

[6] Programs of reimbursement of drugs for treatment of II type diabetes, cardiovascular diseases and asthma were introduced in April 2017, programs for provision of insulin has been effective for a while.

[8] Salaries are defined according to the Unified Tariff Scale