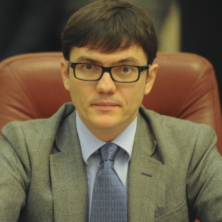 Adviser to the Minister of Infrastructure of Ukraine
Minister of Infrastructure of Ukraine.(2014-2016 years.)
From 2003 to 2006 Pyvovarsky worked at International Finance Corporation (IFC) as an investment adviser. In January 2006 Pyvovarsky joined the investment company Dragon Capital, where he headed the investment banking division. In January 2013 Pyvovarsky became CEO of Continuum Group, which is owned by Ihor Yeremeyev, Stepan Ivakhiv and Petro Dyminskyi.
Pyvovarsky graduated in 2000 from the history department of the Taras Shevchenko National University in Kiev. In 2003 he received a master’s degree in International Business and Finance of Tufts University (United States).