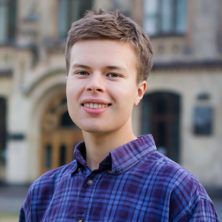 Co-founder of the ukrainian popular science magazine “Kunsht”, one of the organizers of the project “Strenghtening youth as active citizens in Ukraine”. Studies at the Institute of International Relations KNU named after Shevchenko on the specialty “International information”. He is fluent in English and German. Worked on probation in the Department of Policy and Communications of the Ministry of Foreign Affairs of Ukraine, worked as a translator for the OSCE mission during Ukraine’s president election, was elected as the youth leader for the panel at the annual meeting of Yalta European Strategy in 2015. Youth Delegate to the UN in 2016.