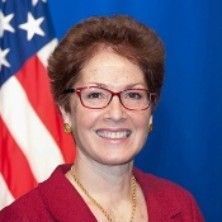 Marie Yovanovitch is the U.S. Ambassador to Ukraine. She previously served as Ambassador to the Republic of Armenia (2008-2011) and the Kyrgyz Republic (2005-2008). She most recently served as the Dean of the School of Language Studies at the Foreign Service Institute, U.S. Department of State. Previously she was the International Advisor and Deputy Commandant at the Dwight D. Eisenhower School for National Security and Resource Strategy, National Defense University. Earlier she served as the Principal Deputy Assistant Secretary for the Bureau of European and Eurasian Affairs and before that as the bureau’s Deputy Assistant Secretary responsible for issues related to the Nordic, Baltic, and Central European countries.

In 2003-2004, Ambassador Yovanovitch was the Senior Advisor to the Under Secretary of State for Political Affairs. Prior to that, she was the Deputy Chief of Mission of the U.S. Embassy in Kyiv, Ukraine. Within the Department of State, Ambassador Yovanovitch has worked on the Russia desk, the Office of European Security Affairs, and the Operations Center. She has also worked overseas at the U.S. Embassies in Moscow, London, Ottawa, and Mogadishu.

Ambassador Yovanovitch is a graduate of Princeton University where she earned a BA in History and Russian Studies. She studied at the Pushkin Institute and received an MS from the National Defense University. 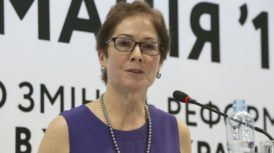