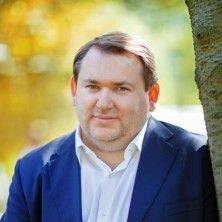 Vladyslav Rashkovan is a partner at SD Capital investment bank. In 2014, he was appointed as the acting deputy head of the NBU. IN 2010-2013, he was the financial director of Unicredit in Ukraine and a member of the board of directors at Unicredit bank. Since 2011, he has been the head of the banking committee of the U. S. Trade Chamber in Ukraine and the member of the board of directors of Kyiv School of Economics. In 2006, he joined Unicredit in Ukraine and managed the local project office in charge of the merger of Unicredit and HVB banks.