The network is spreading information that Russia has allegedly “evacuated” more than 108,000 people from Mariupol without Ukraine’s participation. This was stated by the Russian Defense Ministry. “In total, 19,247 people were evacuated to Russia from the DPR and LPR, as well as from dangerous areas of Ukraine, without the participation of the official Kyiv authorities,” the propagandists wrote on March 29.

This is a fake: the Russian military does not evacuate, but forcibly takes people to the territory of Russia with the seizure of documents of Ukrainian citizens. 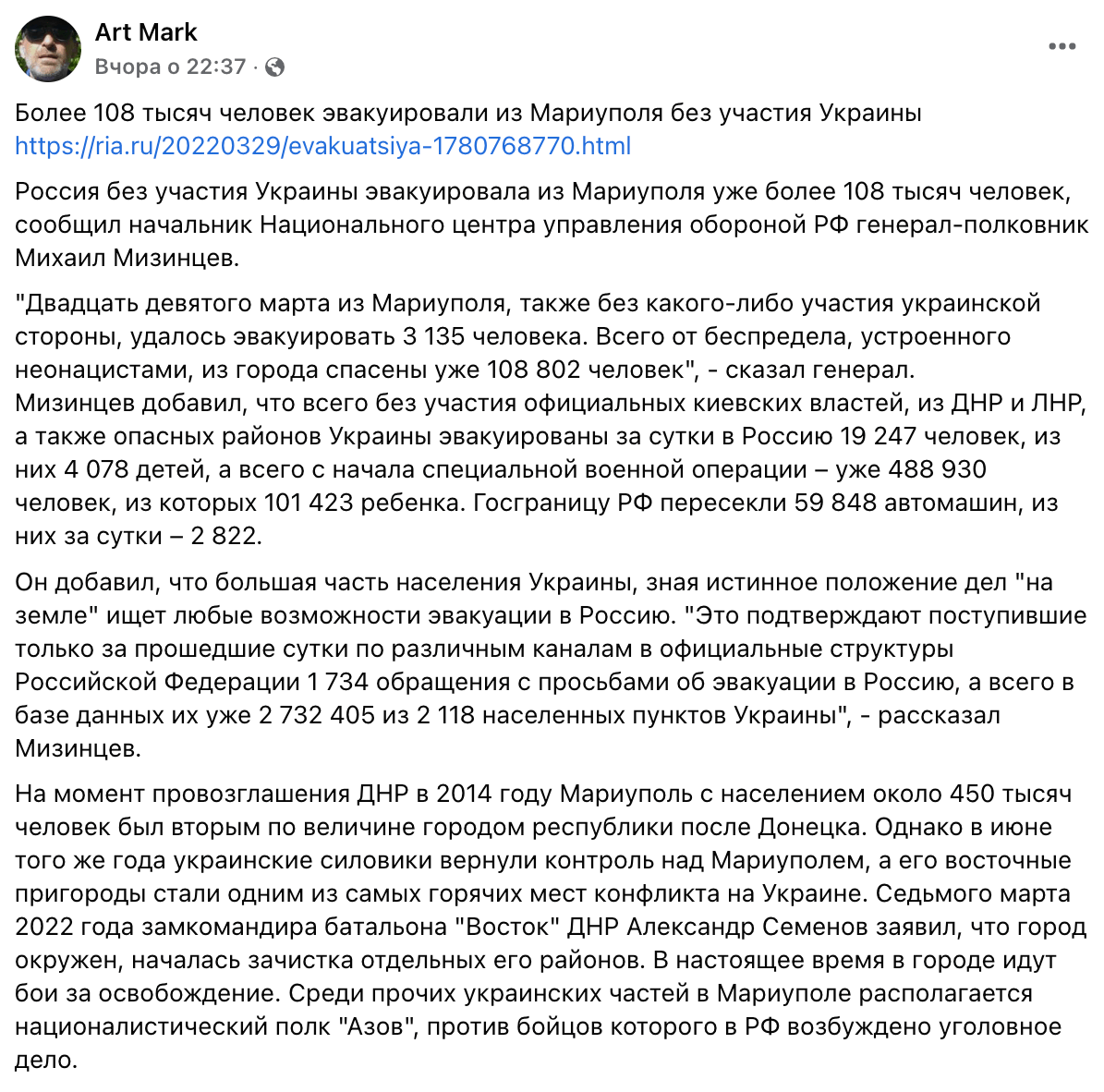 It is still impossible to determine exactly how many people Russia forcibly removed from Ukraine after the invasion. Estimates of the Ukrainian government range from 20 to 40 thousand.

CMA (civil-military administration) spokeswoman Tetyana Ignatchenko-Tyurina said that the occupiers had forcibly deported about 25,000 Ukrainians from settlements in the Donetsk region – from Mariupol, the Mariupol suburbs and partly from the Volnovakha district. Their phones and Ukrainian documents (passports, certificates) are confiscated in the so-called filtration camps, and later people are sent to Omsk, to the Krasnodar Territory.

On March 26, Iryna Vereshchuk, the Minister for the Reintegration of Ukraine’s Temporarily Occupied Territories, said the number of Ukrainians who were forcibly deported could now reach 40,000.

The mayor of Mariupol Vadym Boychenko said on March 27 that the Russians forcibly removed 20-30 thousand people from Mariupol.

According to the deputy mayor of Mariupol Sergyi Orlov, the Russian military is intimidating Mariupol residents to make them agree to go to Russia. “Russian soldiers simply open the shelter and tell them (civilians – ed.):” Look, you have 5 minutes to evacuate in this direction. Just go, walk 3-5-7 kilometers, and buses will take you to the temporarily controlled (by Russia – ed.) territory. ” If you don’t go, this house will be bombed in an hour,” he told the BBC.

In addition, children from Mariupol without parents were taken to occupied Donetsk. Residents of Donetsk also reported that there are refugees who were taken out of the destroyed Mariupol by the Russian military in two schools №25 and №31 in Leninsky district, as well as in gymnasium №70 in Kyiv district. For example, there are now about 250 Mariupol residents at the №31 school.

The deportation of civilians is contrary to the norms of international humanitarian law, namely Art. 49 of the Geneva Convention relative to the Protection of Victims of War of 1949 and Art. 85 of Additional Protocol 1 to the Geneva Conventions, which prohibit the forced individual or mass resettlement or deportation of persons under protection from the occupied territory to the territory of the occupying State.