MANIPULATION: WHO said that there is no cholera outbreak in Mariupol

MANIPULATION: WHO said that there is no cholera outbreak in Mariupol

Since June 7, 2022,  information has been spread online about the WHO denying Ukraine’s claims about the cholera outbreak in Mariupol. WHO spokeswoman Margaret Harris allegedly stated this during a briefing. 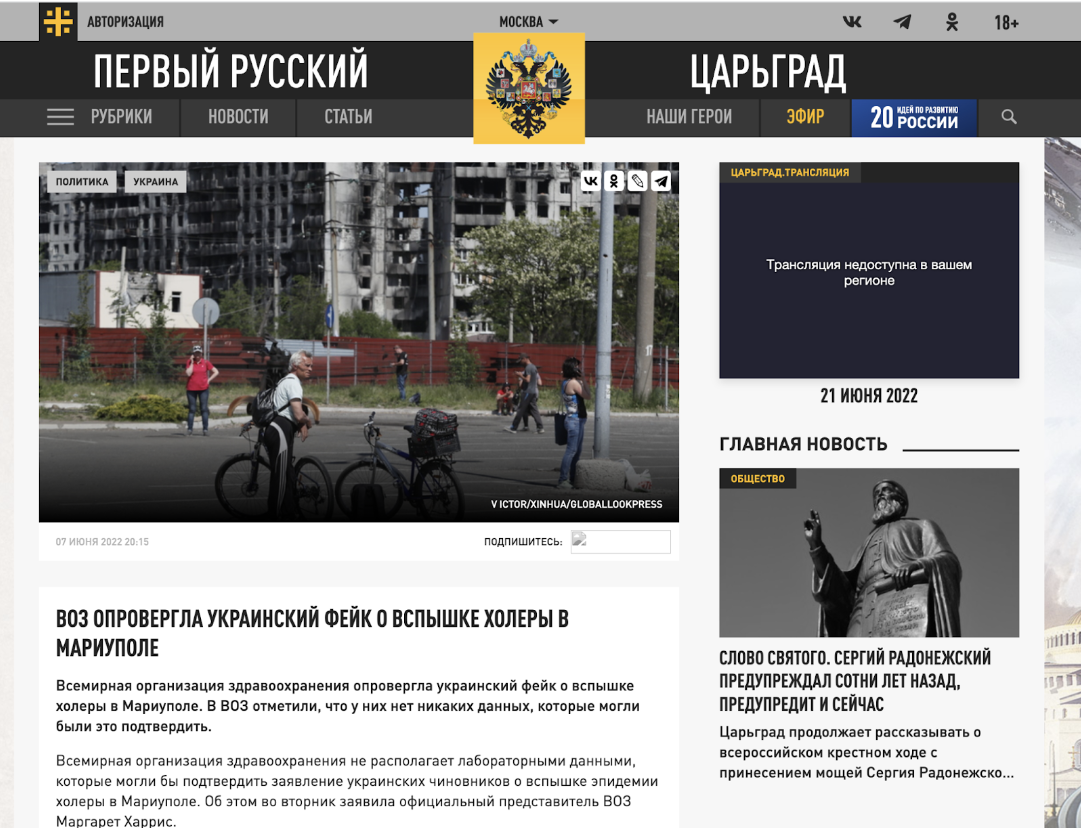 Screenshot of the article

However, this is manipulation. WHO spokesperson Margaret Harris said that the risk of a cholera outbreak in Mariupol was high but WHO could not confirm a current cholera outbreak without laboratory confirmation.

Cholera is an acute intestinal infectious disease caused by ingesting food or water contaminated with the bacterium Vibrio cholerae O1 or O139. Without proper treatment can lead to death. The illness is transmitted by the fecal-oral route from person to person, more often when consuming contaminated water, vegetables, fruits, bathing, and through food and household contacts. The main symptoms are diarrhea, vomiting, and abdominal pain. To prevent cholera, one must observe personal hygiene, wash vegetables and fruits before consumption, provide thorough heat treatment of food, and drink clean water.

At a briefing on May 17, 2022, the WHO noted the risk of infectious diseases in Mariupol and other occupied territories because of mixing city sewage and drinking water, creating “a huge risk of many infections, including cholera.“

On May 18, 2022, WHO spokeswoman Margaret Harris noted: “In Mariupol, where extensive damage to water systems has mixed water with sewage, we are very concerned about the risk of cholera.” On June 7, 2022, Harris said the risk of a cholera outbreak in Mariupol was high. However, WHO cannot confirm an outbreak without a systematic epidemiological investigation and confirmation by laboratory tests (PCR).

The piece also claims that Harris mentioned the cholera outbreak in Mariupol in 2011. However, she never said it.

The WHO regional emergencies director Dorit Nitzan mentioned the cholera outbreak in Mariupol at the WHO briefing on May 17, 2022. She also announced the preparation of anti-cholera vaccines and cooperation with NGOs and WHO’s partners.

On June 10, 2022, the mayor of Mariupol, Vadym Boichenko, spoke about the risk of a cholera epidemic in the city and the spread of other infectious diseases.

On June 13, 2022, the adviser to the mayor of Mariupol, Petro Andriushchenko, said that despite the risk of the spread of cholera, the occupation authorities of Mariupol are not taking any preventive actions. According to him, there has been a problem with reburying the dead, which takes 8 to 10 days. The occupiers have neither the equipment nor the reagents to conduct the appropriate analysis and tests to find out the exact cause of death of the recently buried residents.