Militarizing hospitals and killer mosquitoes in US laboratories: a review of public health narratives. Issue #5

Militarizing hospitals and killer mosquitoes in US laboratories: a review of public health narratives. Issue #5

russia once again accused Ukraine’s Armed Forces of using civilian objects for military purposes: this time, they allegedly deployed MRLs inside an Odesa polyclinic facility and planned on blowing up a children’s hospital in Kharkiv. Besides, there is no end to attempts to invent new fake stories about “US bio-labs:” The russian media reported that Ukrainians wanted to ‘arm’ mosquitoes with deadly viruses.” Meanwhile, fake news of monkeypox continues to spread across the globe.

With the support of the USAID Health Reform Support project, VoxCheck analyzes and refutes public health narratives spread in the information space of Ukraine, belarus, and russia on a weekly basis.

russian media outlets disseminated the russian defense ministry’s statement about Ukraine’s Territorial Defense members forcing patients out of Odesa’s Polyclinic No.29, regardless of their condition. They used it as a deployment point to set up artillery inside and MRLs in the adjacent territory.

The Odesa City Council debunked this fake news story. Odesa Mayor Hennadii Trukhanov and British journalists visited Polyclinic No.29 and recorded a video there. Video footage shows people in civilian clothes sitting in the clinic’s corridors and patients waiting for appointments. However, the russian media reported that all the patients were forced out. Doctors said that about 300 patients visit the polyclinic daily. No rocket launchers or other weapons systems were inside the clinic or the adjacent area. The footage shows no military staff, either. A still frame from the video from Polyclinic No.29 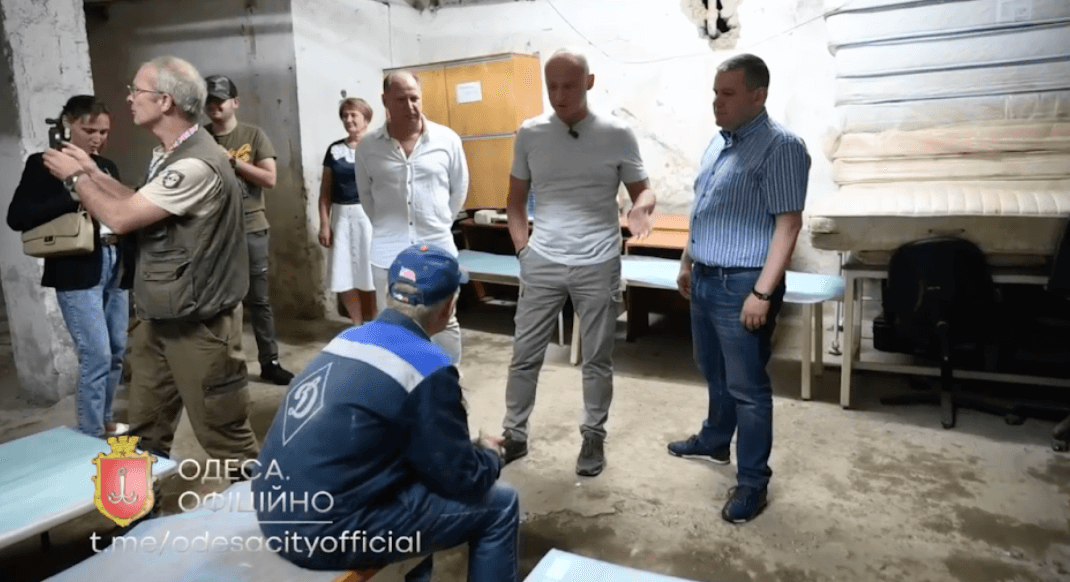 A still  frame from the video from Polyclinic No.29

At the end of the video, you can see the press card of UK journalist Alan Duncan saying he had accreditation from Ukraine’s Armed Forces. 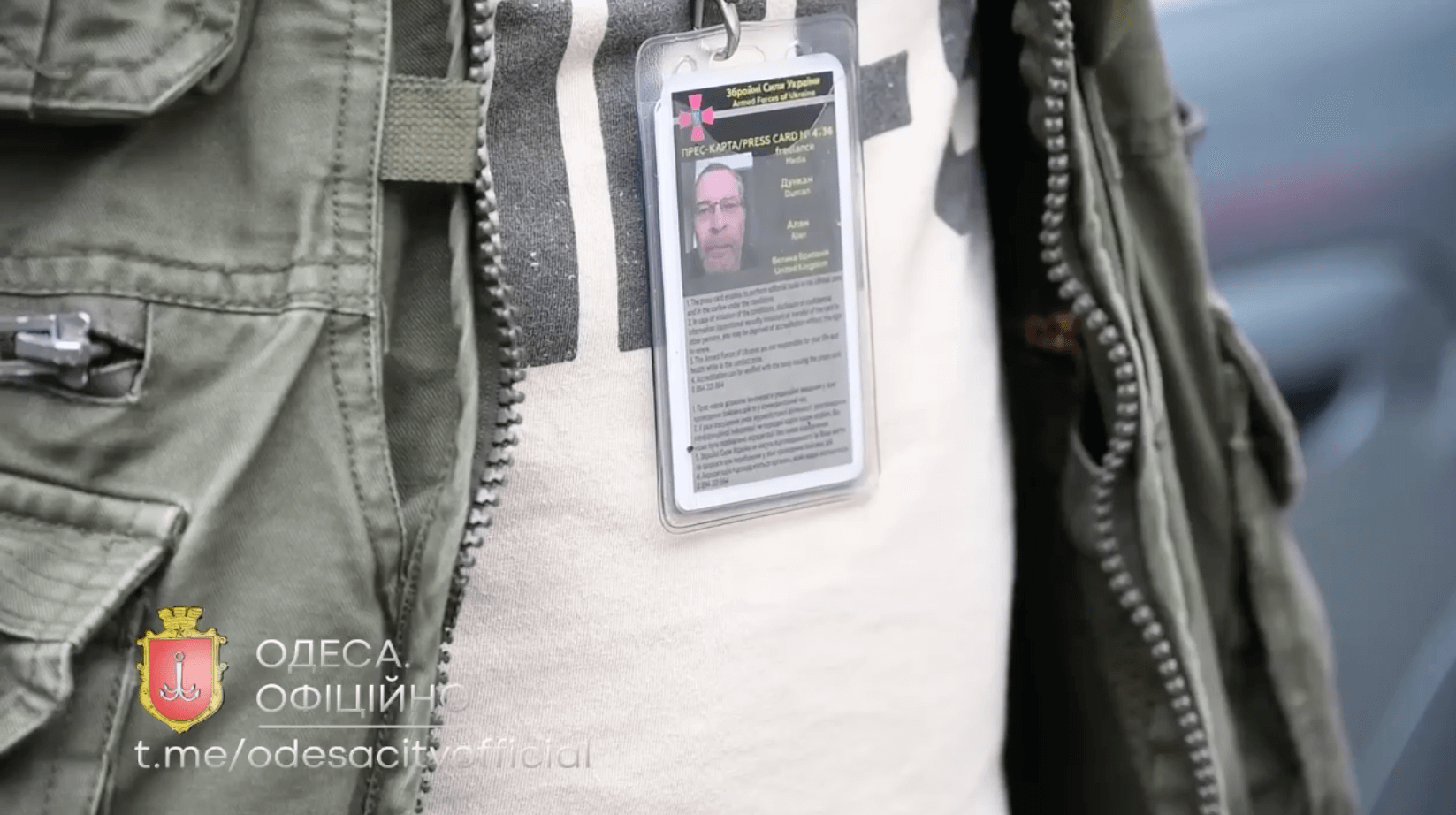 On June 22, the British journalist posted a photo on Twitter near Polyclinic No. 29 showing him interviewing Hennadii Trukhanov. Duncan noted: “100% it’s a civilian clinic not a military base as Russian military claim as a prelude to attack yet another civilian target.”

Interviewing the mayor of #Odessa #Ukraine️ earlier at clinic 29.
100% it’s a civilian clinic not a military base as Russian military claim as a prelude to attack yet another civilian target.
I was in the hospital from the hospital bomb shelter up. pic.twitter.com/Fu4WgsRDuu

Disinformation: The Ukrainian military is going to blow up a children’s hospital in Kharkiv

Another statement by russia’s defense ministry was widely circulated by propaganda outlets, namely that Ukrainian military members from the Kraken battalion were allegedly going to blow up the Kharkiv Children’s Hospital to accuse the russian troops of striking a civilian object. The Kraken special forces unit and Territorial Defense members reportedly brought medical personnel and sick children from other hospitals in the city under threat of shooting them.

russia’s defense ministry claimed that mines were planted inside the building to prepare it for an explosion when “russian artillery begins to strike the military infrastructure of Kharkiv.” That is how the disinformers revealed their motives for throwing in this information: to cover up for the russian army, specifically bombarding civil infrastructure in Ukraine.

It is not the first time russian propaganda has talked about “nationalists” hiding inside objects of civil infrastructure during shelling. However, the Ukrainian authorities say that since the beginning of the full-scale invasion, russian troops have:

(It is unknown whether the data include the civil infrastructure destroyed in the temporarily occupied territories, to which the Ukrainian authorities might have no access.)

Propaganda outlets’ fake news of the Ukrainian military seizing hospitals and other facilities is a direct announcement of future shelling. The scale of the threat can be estimated from one quote from the russian media: “Ukrainian military and Nazi units are well-known for using schools, kindergartens, and hospitals as a screen during russia’s liberation of Mariupol.” The russians completely ruined the city of 400,000, destroying 95% of all buildings. They keep hiding behind false stories about “nationalists” in every building.

The russian media have consistently demonized the Kraken special forces unit liberating the Kharkiv Oblast from the invaders by attributing to them the terrorizing of civilians. Needless to say, no evidence of this exists.

Disinformation: A US bio-lab in Ukraine studied how to infect Ukrainians with deadly viruses via mosquitoes.

russian mass media, citing a representative of the russian armed forces, wrote about US labs in Ukraine studying viruses that can be spread through mosquito bites, including dengue fever. They referred to Project P-268, under which a “viral preparation” was allegedly made in Kyiv and transferred to the USA for field research. It was done by the Science and Technology Center in Ukraine (STCU). russia’s defense ministry argued that mosquitoes might be used to infect the population.

The defense ministry published three documents that purportedly confirmed this: a “work plan,” a “project proposal,” and a letter to Jane Tannenbaum from the STCU’s executive director Andrew Hood. The document format is similar to that used by the STCU. Unlike other STCU documentation, they have no seal or official signatures.

However, none of the cited documents mentions infecting people with viruses through mosquito bites. Moreover, russia’s defense ministry even correctly translated these documents into russian. The project description clearly says that Ukrainian scientists had to produce Viraden, a preparation based on the densonucleotide virus of the yellow fever mosquito (AeDNV). One kilogram of the preparation was to subsequently be sent to Colorado State University. Viraden was developed by Ukrainian professor Leonid Butatskyi to control the mosquito population. AeDNV is highly transmissible to mosquitoes but does not infect humans, vertebrates, or invertebrates. 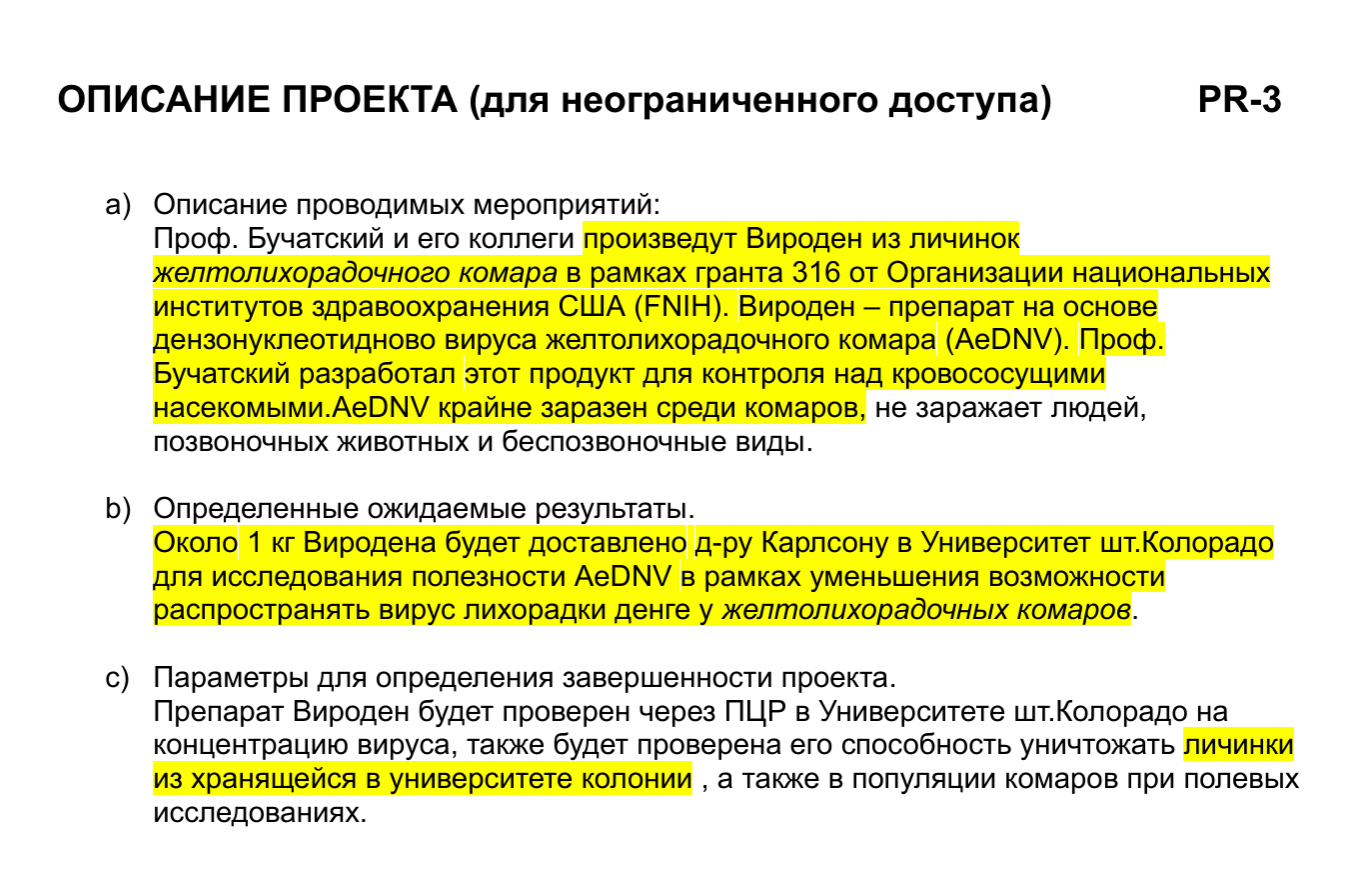 The document published by russia’s defense ministry. Project proposal, a russian translation from the original

The Work Plan clearly says: “The study’s main objective is to use the mosquito virus as part of strategies to control and combat insect-borne diseases such as Dengue.” That is, the study aims to infect mosquitoes with a pathogenic virus to prevent the spread of viral diseases dangerous to humans.

The document published by russia’s defense ministry. Working plan, a russian translation of the original

The Science and Technology Center in Ukraine, created in 1993 under the Biological Threat Reduction Program, has been troubling the russian media for years. Previously, they published “sensational news” of America admitting to having secret bio-laboratories in Ukraine. However, the US diplomats’ statement concerned the STCU.

In this article, we wrote in detail about the Biological Threat Reduction Program and russian fake news stories.

Disinformation: People are scared by the plague pandemic in Ukraine

According to Ostap Stakhiv, a Ukrainian anti-vaxxer and conspiracy theorist, Ukrainians were allegedly being prepared for a new plague pandemic and intimidated with information about its dangers. According to him, people would be “fooled” in the same way as in the case of monkeypox or COVID-19.

In June, neither Ukrainian state bodies nor major media outlets “incited panic” about a possible plague pandemic. Cases of plague infection were last reported in Ukraine in 1911. Currently, there is no reason to believe that the plague threatens Ukraine.

In recent decades, plague cases have mostly been reported in African countries (e.g., the Democratic Republic of Congo and Madagascar). Even though the disease has a high mortality rate, timely diagnosis and treatment can prevent death.

During the week, reports appeared on the internet about the deaths of pigs from African swine fever in the Kirovohrad and Sumy regions. However, the African swine fever virus is not transmissible to humans being safe for human health, so there is no cause for concern. In previous years, the disease was reported in various regions of Ukraine, but its outbreaks did not lead to mass deaths of domestic animals.

Misinformation: WHO has declared monkeypox a pandemic

On June 23, social media spread the news of the World Health Organization (WHO) declaring the monkeypox outbreak a pandemic. Ukrainian and russian media outlets also published this news. Notably, in relaying the information, the media outlets failed to provide a link to the original source, i.e., the WHO itself.

The World Health Organization has officially declared monkeypox a pandemic. The organization recognized the monkeypox outbreak as a public health emergency of international concern. They stressed that to reduce negative consequences, the disease outbreak should be eliminated by immediate action everywhere where the virus is spreading. The network’s representatives said that currently, cases had been reported in 58 countries amounting to 3,417, with the spread rate doubling each week. Earlier, it became known that the World Health Organization (WHO) would hold a Committee on Emergency Situations meeting to assess global threats of monkeypox. The organization’s director general, Tedros Adhanom Ghebreyesus, said that the current monkeypox virus behaves strangely compared to previous outbreaks, and virologists must pay special attention to it. 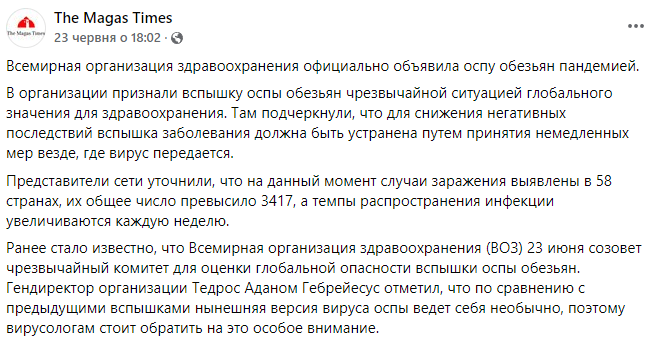 WHO did not declare a monkeypox pandemic. There is no such statement on the organization’s official website. On June 23, the WHO Committee on Emergency Situations held a meeting to discuss the threat of monkeypox. On June 25, the meeting’s results became known: WHO experts did not determine that the monkeypox outbreak constituted a Public Health Emergency of International Concern (the WHO’s highest level warning of the threat of spreading the disease, e.g., COVID-19). However, the Committee advised that the spread of monkeypox should be closely monitored, and measures should be taken to prevent it.

News of declaring it a pandemic appeared on June 22 on the website of The World Health Network, a non-profit that brings together medical experts and public health activists. The organization called the monkeypox outbreak a pandemic because the disease continued to spread rapidly. According to their estimate, as of June 22, 58 countries had reported 3,417 cases of infection. The WHO provides slightly lower figures for the same period: 3,413 cases in 50 countries.

In the same statement, the World Health Network called on WHO to declare the outbreak of monkeypox a Public Health Emergency of International Concern and to make greater efforts to control the disease.

Unlike the WHO, the World Health Network does not have the authority to give recommendations to countries or coordinate their public health policies.

Monkeypox can be spread via airborne droplets during close and frequent contact with an infected person, after contact with infected people’s blood, affected skin, or mucous membranes. A pregnant woman can also pass the virus on to her yet-to-be-born child.

The best way to prevent getting sick is to avoid close contact with infected people and observe hygiene rules (firstly, hand washing).