When approving the Law on State Budget each year, the MPs decide, on the proposal of the Government, on how much budget money can be spent in each policy direction/area.

However, the actual funding amounts for individual areas by far exceed the spending plan approved by the lawmakers.

The reason for this are the so-called “transfers”, when – without amending the Law On State Budget and simply based on the Cabinet’s decision upon agreement with the parliamentary Committee on Budget – the allocations can be reassigned from one budget program (i.e. spending area) to another or within the same program – from consumption expenditure to development expenditure and vice versa.

Although it is a technical thing, its scope is mind-boggling.

For example, according to our study, the state budget spending plan was cut back by UAH 11.5 billion with regard to 80 budget programs (out of 600).

The funds were reallocated to other budget programs. Some programs were completely defunded.

The tendency continues. Since the beginning of 2020, the Government has made 40 decisions on the reallocation of budget funds amounting to UAH 9.2 billion.

Most “transfers” have to do with the reserve fund (26 decisions).

However, in monetary terms, the reserve  fund is “in the minority”, with two thirds of the funds (UAH 6.6 billion) being reallocated from other budget programs.

The largest “transfers” were made in February and March, i.e. soon after the beginning of the new budget year (Fig.1)

This is a result of poor budget planning and low-quality budget program design. But not only that.

Analysis of the “transfers” shows that sometimes the spending units (state-funded entities and governmental bodies) deliberately decrease their initial request for funding to “win it back” in the course of the year, avoiding drawing too much attention to this issue.

The KSE Center of Public Finance and Governance carried out an in-depth analysis of the history and “substance” of governmental decisions on reassigning budget funds in 2019 – the first five months of 2020. 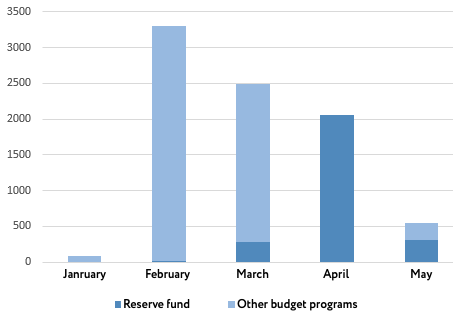 Source: the State Treasury Service, calculations by the Center of Public Finance and Governance. NB: the Figure does not include June data because as of June 16, the reallocated funds amounted to only UAH 5.14 million.

Reallocation of funds within the same program due to retrenchment in certain spending areas (most often, from consumption expenditure to development expenditure).

It is explained that reduced energy consumption freed funds that will be used to renovate Mariyinsky Palace and adjacent territory.

Reallocation of funds due to changes in legislation or reforms’ duration, not foreseen at the time of drawing up the budget program’s passport.

For example, funding for the program “Supporting the Armed Forces of Ukraine, training personnel and corps, providing healthcare to personnel, military service veterans and their family members, war veterans” was increased by the governmental order of May 27, 2020 by UAH 233 million, due to the accelerated completion of military reform from 2021 to 2020.

Doing so, spending decreased by the same amount for the program “Command and military management of the Armed Forces of Ukraine”.

Reallocation of funds from the programs that lost political significance.

A classic example is the budget program “Supporting the complex public administration reform”, launched in 2016.

For several years, the implementation of public administration reform was a condition for receiving financial support from the EU.

Both Prime ministers heading the government in 2019 – Volodymyr Groysman and Oleksiy Honcharuk – emphasized the importance of this reform.

Notwithstanding, the reform was actually fully “curtailed” in 2019.

With no funding for public administration reform, this budget program’s funds were reassigned for other purposes.

A similar situation is observed in 2020. The Law On State Budget allocated UAH 459 million for this reform.

However, because of the “transfers” from this program to others, the program had only UAH 12.7 million left already in April (again, with zero funding since the beginning of the year).

Reallocation of funds due to revised calculations.

For example, in February 2020, the educational subvention from the state budget to local budgets increased by UAH 2.2 billion (the lion’s share of all the reallocations in February 2020) due to the revised data on the number of schoolchildren.

Reallocation of funds due to the spending agencies’ negligence toward budget planning.

A number of “transfers” are testimony to a box-ticking approach by the main spending units toward the preparation of budget programs – which, by design, should be a key tool for high-quality budget planning in public administration.

A textbook example is the mine liquidation program expenditures (KPKVK 2401070 “Liquidation of coal and peat mining enterprises”).

From year to year, this program is used for “transfers”, resulting in the money for mine liquidations being used to pay salaries to miners.

In 2019, “transfers” from this program occurred four times, with the amount of funding decreasing from UAH 660 million to UAH 159 million: the “transferred money” went to the miners’ salaries.

Finally, some “transfers” do not even seem to be a result of the Government’s box-ticking approach to budget planning, but rather a planned campaign aimed at getting certain private institutions subtly “hooked” on the budget.

E.g. the budget program providing funding to the National Academy of Statistics, Accounting and Auditing (0414090 “Training in the field of statistics provided by a higher education institution and supporting its practice bases*” – Fig. 2).

The Government recently decided to increase funding for this Academy by UAH 2.1 million in 2020. It might not seem like such a big amount. But there is one hitch.

The thing is that before 2018, the Academy had relied exclusively on private funds – the students’ education there used to be paid for by private individuals or legal entities only.

In 2018, the Academy managed to receive a small amount of budget funding for the enrollment of students (the budget program was established for this very purpose). 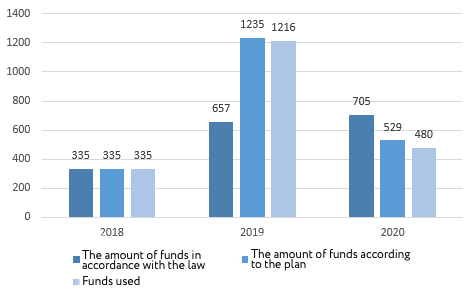 Source: the State Treasury Service, calculations by the Center for Public Finance and Governance. NB: for 2020, the indicators “Budgeted funds” and “Used funds” are given for the period of January-March.

And already in 2019, as a result of the “transfers”, the amount of funding for this Academy was increased by UAH 578.1 thousand, or nearly twofold compared to what was laid down in the Law On State Budget.

Funds for this were taken from the program “Leadership and Management in the Field of Statistics”.

A similar situation is again observed in 2020, but this time, due to the “transfer” the funding increased threefold (by UAH 2.1 million).

At the same time, this money is needed to support the students’ training process in the first half of the 2020-2021 academic year, so there is a high risk of a similar situation in 2021.

In other words, what started out as small budgetary support has grown into significant budget funding in less than 3 years (and this is during the crisis).

This is a conscious, gradual and rapid increase in budget funding for the organization, carried out “in circumvention” of the normal budget planning through the mechanism of reallocation of spending in the course of the year.

Fig.3 shows the top 20 programs with increased and decreased funding due to the reallocations in 2019.

Figure 3. the top 20 programs in terms of changes in the financing plan due to reallocation of budget funds in 2019, UAH billion 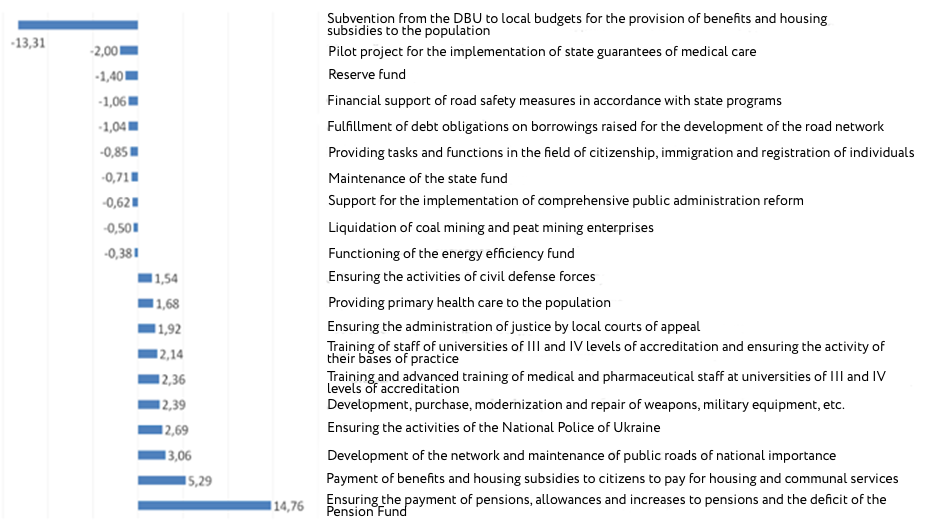 Source: the State Treasury Service, calculations by the Center of Public Finance and Governance

We can argue that, instead of being an instrument to correct critical errors that can actually occur during the budget planning process, the “transfers” (reallocations of budget funds) have become a reason for negligence on the part of main spending units and, at times, an instrument to manipulate the budget process allowing them to declare certain budgetary goals while spending budget funds on something completely different.

Therefore, both the Government and, above all, the Committee on Budget of the Verkhovna Rada that approves the “transfers” should be more careful and attentive with regard to their substance. Otherwise, there are significant risks that very limited budget funds will be spent on the wrong things instead of on what is really important for the country.