On October 25th, Ukraine went through the first local elections after the completion of the decentralization reform and adoption of the new Electoral Code. Voters faced several challenges, including the risks associated with the Covid-19 pandemic and application of new electoral rules including the usage of new design of ballots.

The pandemic definitely influenced the turnout, but in spite of fears, enough people (36,9% of voters) came to the elections to make them legitimate in the eyes of the society. The second tour of local elections in cities where no candidates for the post of city major got more than 50% was organized on November 15th and 22nd. The turnout was around 30%.

Here we present the highlights of the discussion.

Recently we published a summary of the discussion on risks and opportunities of the new Ukrainian electoral legislation.

These local elections were the first elections to be organized according to the new Electoral code that introduced fundamental changes to the election process. So the double challenge for the elections was a new set of electoral rules as well as the pandemic.

An essential part of successful elections is a working election administration (EA), which is responsible for providing ballots to voters, “accompanying” voters at a polling station and establishing voting results. Due to the pandemic, the US felt the problem with recruiting election commissioners, but Ukraine managed to avoid this problem. However, there are other issues.

In Ukraine 85% of respondents of a panel survey (401 poll workers before the elections and 348 of them after the elections, Lviv oblast) agreed that work in the commission is the professional activity that should be paid (instead of it being qualified as a civic duty that should be performed on a voluntary basis). It could mean that the overwhelming majority of poll workers in Ukraine prioritize material incentives over nonmaterial ones. The official payment from the state to election commissions members is around $20 per 24 hours work at the polling station. Sometimes members of election administrations have to do unexpected jobs. This year, the government prepared recommendations of cleaning the polling station premises every 4 hours (washing the floor, door handles etc.) but this provision was not funded (i.e. there was no additional money for hiring the cleaners). Therefore polling station workers took this burden on themselves. Inadequately small size of compensation creates an opportunity for political players to pay additional unofficial remuneration to PEC members. Of course it is not allowed, but if we eliminated this “black” money we could face the risk of shortage of people in polling stations. 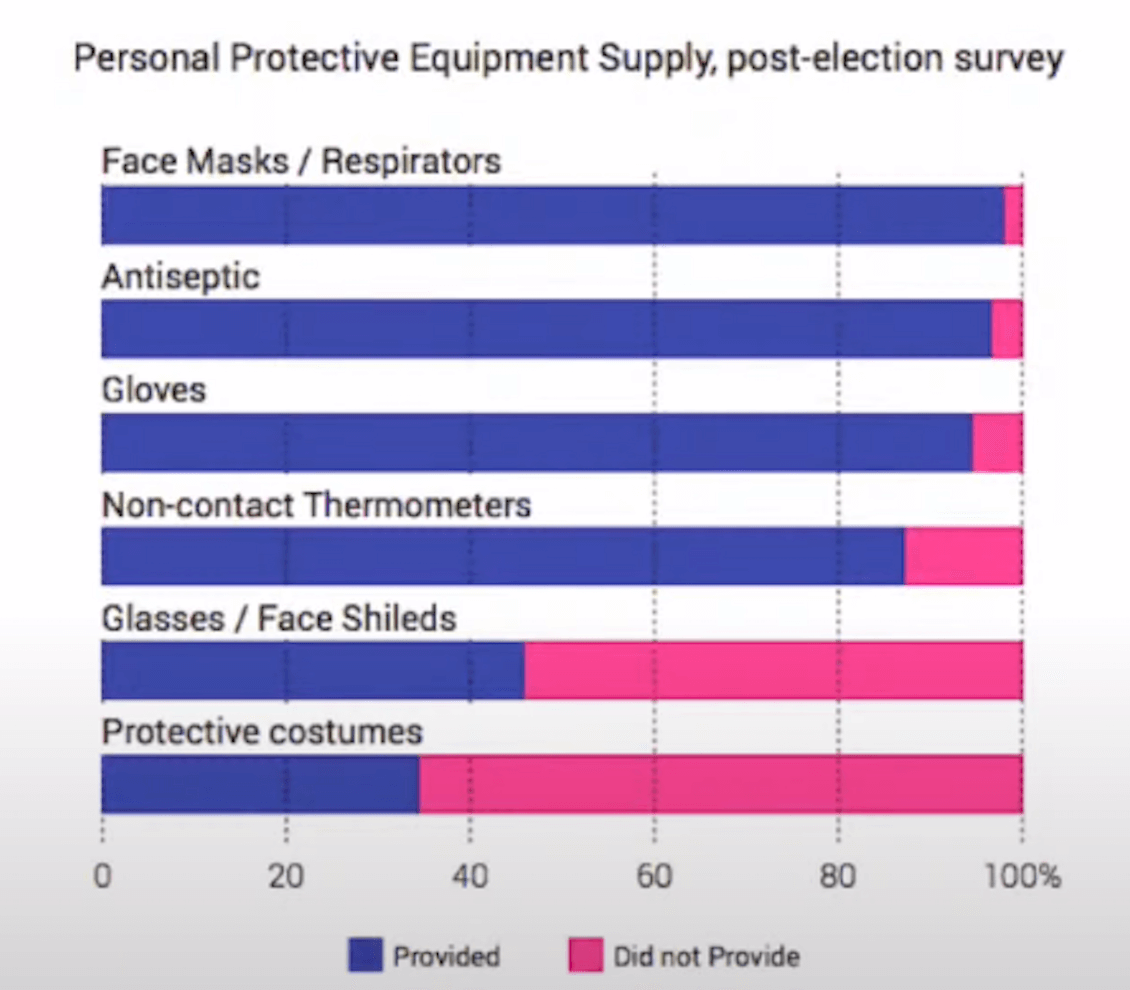 The second serious problem was the lack of protective equipment. Not all commissions were provided with it (Figure 1). There were not enough glasses / face shields and protective costumes. Such irresponsibility put the members of PEC and voters under the risk of getting Covid-19 and spreading it. The issue with protective costumes and other equipment was very important when two constitutional norms faced each other. People with Covid or contact people on self-isolation have the right to vote. At the same time, every poll worker has a right for her/his healthcare. As a result, the decision was taken on a case by case basis whether people from the polling station would go to those with Covid-19.

Some observers had expected that voters did not catch how to fill in a new ballot paper where a voter could mark not only the party but also a specific candidate. In general this risk did not realize. In Lviv oblast, 80% of people provided personal votes for candidates, and the share of invalid ballots was just 7%. As well as in the Solomyansky district in Kyiv the majority of votes were cast for the candidates. Only 13% of voters supported the party’s general city list. Thus it seems that people understand the new ballots pretty well. However, older people had difficulties with it.

Pros and cons of the new election system

+ A quota for female candidates was introduced. This quota is a good step but obviously not sufficient.The main issue is that the gender quota (40%) is obligatory only when nominating candidates, so before the elections candidates can refuse to run. After the elections, they can also refuse their mandate. If Ukraine really wants to be sure that women are as much involved in politics as men then we have to ask the parties to deal with the quota more honestly and to fix a rule that every second place on a list goes to a woman.

– The formation of the electoral list was pretty centralized as a result of personal arrangements and with the understanding that only certain candidates are able to gain 25% of the electoral quota and move up the list. To stimulate much better work with the voters during the agitation period and competition between candidates inside the party the election quota should be decreased.

– The imperative mandate also strengthened the role of parties compared to voters. It is easy to imagine a situation when a candidate has support of a local community and thus wins the election, and later he/she is recalled by the party for going against the part line while defending community interests.

– A large drawback of local elections in 2020 was the restriction to take part in elections for 18 communities in the Donbass region. The decision was adopted without a clear justification and based only upon the recommendation of the civil military administration. These citizens had been allowed to vote in 2019 and it makes no sense to stop them from voting in these local elections.

Were there violations of election procedures?

It is a problem that citizens of Ukraine cannot get sufficient insight into the financial structures behind parties and their financial reports. Despite some steps in this direction, party finances are not fully transparent. For example, there are NGOs working close to parties during election campaigns which don’t need to follow the same transparency rules as parties. Sanctions for non-compliance with the transparency clauses should be much stricter.

Also, this year many candidates had a logistical problem with their election funds because prior to registration (which was very late this year) it is not possible for a candidate to open his/her fund and start campaigning. Thus, many candidates had to squeeze their campaigns into a few weeks time period.

A positive decision to make it easier to change an address for voters’ registration mainly aimed at protecting the IDPs and working migrants voting rights led to abnormal “popularity” of some districts – with many voters registering there right before the elections. For example, we observed this in Carolino-Buhaz (Odeska obl.).

The good news that the changes introduced into the Criminal Code of Ukraine and the Code of the Administrative Offenses allow the National Police to suppress such violations. An effective investigation of the law enforcement bodies will play a crucial role here and it is also crucial for preventing any organized abuse of this procedure.

Apart from that, observers noted other violations, such as showing filled ballots to other people (was observed on 7,5% of polling stations), taking photos of ballots (1,6%), ballot stuffing (0,6%). On 10,5% of polling stations ballots were given to voters without IDs, or even worse – given to another person (while voting can be only personal). This practice was widespread in the rural areas. These numbers are not bigger than the ones we had in 2010 and 2015. Some of them are the same and some are even lower, which is good news.

Overall, despite changing the rules right before the elections, it seems that elections ran pretty well and their results reflect the will of people. Hopefully the electoral legislation will execute its main function – development of ideological parties, rather than political projects, in Ukraine.