A systemic analysis of the Ukrainian political crisis shows that inclusive leadership is the key success factor of reforms in Ukraine. Post-Maidan Ukraine needs a New Deal (a kind of agreement between civil society, business and government, a new social pact to build a modern state), centered around the rule of law and the effective management tools.

In Western democracies, the three main categories of actors (power, business, and civil society) are separated, and there are clear interaction rules to assure their cooperation and to provide a framework in order to avoid conflicts of interest. From this point of view, the real problem in reforming the Ukrainian political system is the need to cut the Gordian knot of political-oligarchic system where financial resources, political parties and the media are in the hands of the same people or clans.

Ukrainian crisis – how to change the system?

The oligarchic political system is a source of tension and the origin of a strong sense of injustice in society. That is why it is urgent and critical to dismantle this oligarchic system in order to save the country. New rules must elevate the Ukrainian political life to Western standards based on fundamental democratic principles that aim to reduce the conflicts of interests within the society. For this, the three branches of government – legislative, executive and judicial – should also be completely separated. Most of the necessary changes are known by the Ukrainians, the main points were even fixed in the coalition agreement signed after the parliamentary elections in October 2014.

The issue of injustice and the inequality in the distribution of national wealth is one of the key issues for changing the rules and reforming the old corrupted system that is why fighting massive corruption at the highest level is priority number one. The famous economist and Nobel laureate Joseph Stiglitz noted in his latest book that the issue of inequality and injustice is a political choice, the result of the accumulation of unfair political decisions and misplaced priorities.

How then to explain the difficulties of the realization and implementation of the coalition agreement? Why are reforms not implemented even though everyone knows WHAT should be done? The answer is simple – the resistance to change expressed by the old system. The resistance to change is a known phenomenon; there is even a specific scientific approach and particular understanding of the key success factors by the times of change. For successful change management in this reforms period, the «resistance phenomenon» should be taken into account. Certain people fear changes because there are some instinctive psychological reactions. Fear of losing certain benefits (resources, influence, power, social status, etc.) explains the strong resistance to change.

System analysis of post-Maidan Ukrainian political situation shows clearly a separate category of «conservative» actors (certain representatives of the old political parties of the past, some bureaucrats and officials who are part of the system that needs to be changed), who talk a lot about reforms, but do little or nothing (particularly in the fight against corruption or purification of the judiciary system). The paradox is that on the one hand, they can be able to take some initiatives for changes (or at least to sham it), but as long as they try to «win something» or «to avoid any losses», the final results will be very disappointing, because too much energy is directed to support their own ambitions or to strengthen personal positions. The last Ukraine – EU summit stressed the absolute necessity to begin finally doing real reforms, because otherwise Ukraine risks losing the support of Western partners in the near future.

Meanwhile, most of the civil society is more mature than the political elite. Civil society has learned to observe and analyze real facts and concrete actions, rather than to rely on political promises. Thanks to new information and communication technologies, despite the fact that traditional media are under the influence of oligarchic clans, conscious citizens instantly realize everything that is done or not done by political leaders. The government did not know how (or did not want?) to restore public confidence in state institutions, the economic situation has deteriorated significantly, and the war in the East can no longer serve as an universal excuse. A careful analysis and comparison of obligations (in words) and real acts of post-Maidan political leaders shows the weakness of our political elites. Or their weak will to respect and to fulfill their recent political promises. Political will – which is defined as the «will to act», the «ability to act» and the «feeling that we are required to act» – is critical for real changes to occur.

The situation may seem paradoxical: the elite do not want real changes, to avoid losses of their benefits; the business community and civil society understand that changes are inevitable. As publicly stated by former Finance Minister Oleksandr Shlapak (2014), the «political will exists within civil society», but the political will is not strong enoughamong the political elite, as we have seen through the lack of real actions, such as fight against corruption (on high political level). close ties and strong relationships among political elites make implementing and enforcing policy changes particularly challenging.

The two key factors for successful changes are synergy research and inclusive leadership. The Post-Maidan volunteer phenomenon shows that in Ukraine more and more people are mobilized to solve problems at local and national level, or in the promotion of the interests of Ukraine in the world. They want to act and they feel the need or even the duty to act, and they finally will change the system. The Ukrainian volunteers, or the phenomenon of «the-do-it-yourself-country» are the proof that in Ukraine there are more and more responsible citizens. It only remains to spread the momentum of solidarity and collective action. The basic rule of change management, the core idea of the famous French author Jean-Christian Fauvet is very simple: those who really want changes should look for allies, because very often we lose not because of the opponents, but due to lack of allies.

That is why constant communication is needed in order to involve all potential allies in the project, to develop trust and collective action synergy based on cooperation. A very important thing: trust does not mean “don’t attack“, but rather “don’t defend yourself“. As long as the other person has done nothing to lose trust, he/she can be treated as trustful. At the same time, any government will resist creating tools to limit its power. Civil society, the intellectual and business environment should show an example of coordination, as during the Maidan. They must create the conditions of an “intellectual and economic Maidan“.

Post-Maidan Ukraine needs a New Deal (a kind of agreement between civil society, business and government, a new social pact to build a modern state), centered around the rule of law and the effective management tools. The key words for this New Deal System are cooperation and trust. Because knowledge economy in the 21st century is built mainly through intellectual capital, trust and credibility are the central elements that are required for the development of collective intelligence. A series of scientific papers focused on the issue of trust and its determinants, the factors that «create» trust. The researchers highlighted the qualities that people must have in order to generate trust (Coleman, 1988, McAllister, 1995). These factors are competence, transparency, honesty and support (or compassion).

Intellectual capital consists of human capital (knowledge and skills that belong to each individual) and social capital (based on trust that enables people to cooperate). Strong social capital makes it easier for people to share their ideas and knowledge and finally creates needed conditions for the development of collective intelligence. The centerpiece of this new paradigm – thinking about collective intelligence and invest in human capital to succeed in the globalization era where cooperation and trust are important components of economic value-added (cf. diagram). 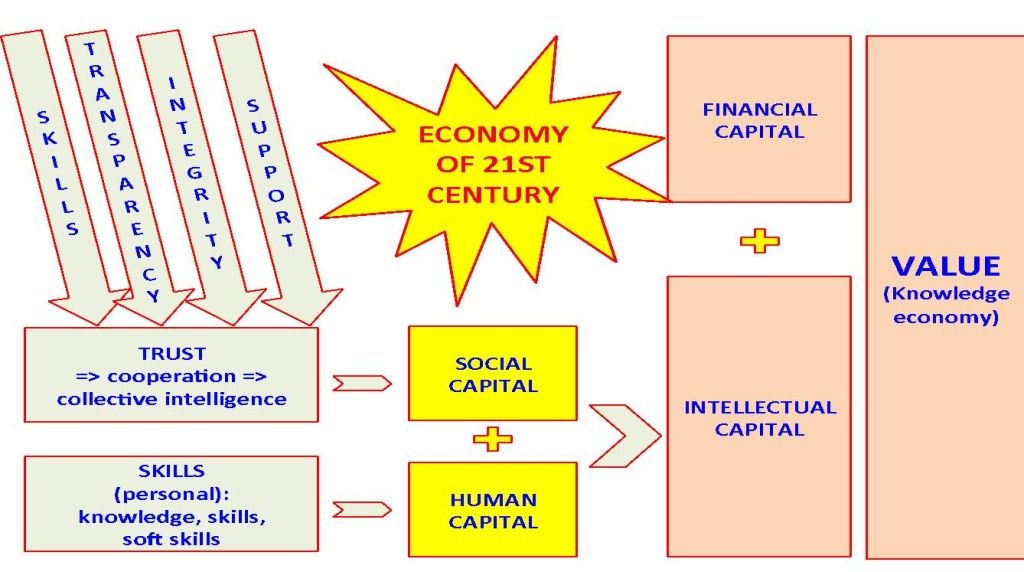 Therefore, in the actual context of changes within the current political and socio-economic system in Ukraine, successful leaders are the ones who quickly realize that times have changed and there is no other choice but to match the expectations of society. The lack of competence, transparency and integrity will significantly reduce the duration of political careers, because 21st century’s basic capital will be the leader’s authenticity. «Say what you do and do what you say,» – if you want that people believe you, this will be the new political life postulate.

Times change, and Ukraine is changing. Now there is a great demand for the new elite to take initiative and assume political and administrative responsibility for the future development of Ukraine. Ukraine needs competent, transparent, honest, sincere, and especially caring leaders who are able to put the collective interest and public service above their personal interests. As the famous English statesman Benjamin Disraeli wrote, «a politician thinks of the next election and a statesman thinks about future generation». Ukraine now needs a new breed of leaders. It needs statesmen who are able to forget about the next election and think about future generations.

Hawrylyshyn, Bohdan (2015), The State of The World, Need for The New Paradigm and Role of Ukraine in It, International Conference, 25 of April 2015, Kyïv, Ukraine.

McAllister, Daniel J. (1995), Affect – and cognition – based trust as foundations for interpersonal cooperation in organizations, Academy of Management Journal (38), 24-59.

Stiglitz, Joseph (2015), The Great Divide, Unequal Societies and What We Can Do About Them, First Edition, New York.