According to medical statistics, the incidence of the majority of diseases did not increase in 2015-16 in war-affected regions of Donbas compared to 2012-13 in the rest of Ukraine. This counterintuitive result warrants further discussion because it contradicts recent literature for other countries with ongoing wars and continuing deterioration of other socio-economic outcomes in Donbas.

Since February 24th, 2022, the brutal full-scale Russian invasion against Ukraine has attracted global attention, with phrases ’Slava Ukraini’ and #StandWithUkraine becoming internationally recognized symbols of support by the whole world. However, some international observers overlook the fact that the war has lasted (albeit at varied intensity) since 2014 when Russia began the military campaign to annex the Ukrainian Autonomous Republic of Crimea.

In our recent working paper (Obrizan and Iavorskyi 2022) we consider the effect of the earlier stage of the war in 2015-16 on population health in Donbas (including government-controlled territories of Donetsk and Luhansk regions) relative to other parts of Ukraine in 2013-14 in order to identify causal effects of the conflict. Previous literature has demonstrated devastating effects of violent conflict and wars on citizens, refugees, and migrants from conflict-affected areas. Three groups of diseases have been shown to worsen due to military conflict. First, wars are associated with the reemergence of infectious diseases including tuberculosis, polio, measles and even cholera. Second, conflicts bring about mental health problems such as posttraumatic stress disorder (PTSD), depression, and somatization disorder. Third, wars may contribute even to some chronic non-communicable diseases such as cardiovascular diseases and cancer.

In order to check whether findings from previous literature apply in Ukraine we have collected from the centers of medical statistics a unique dataset of 36,024 district level observations for main disease groups spanning 2012-2016. The final balanced sample for each disease group in each year includes 474 district (rayon) level observations, of which 39 (or 8.23%) are conflict-affected districts of Donbas controlled by the Ukrainian government. We excluded 2014 because the war started in spring, and we cannot identify which cases happened before and which during the conflict. We use these data to obtain causal estimates of the war in Donbas on population health.

We model the number of new cases per 1,000 citizens (the dependent variable) for each disease category as a linear function of a set of difference-in-difference indicators and other control variables such as indicators for big cities, the share of the rural population, average wage, and capital investment per capita, which are available at the district (rayon) level. Our key variable of interest is “Years 2015/16*Donbas” which shows the causal effect of the war on population health in government controlled districts of Donbas when the conflict was ongoing in 2015-16.

Table A in the Appendix reports the estimation results. To our big surprise, there are very few statistically significant effects of the conflict on population health. For example, the coefficients for infectious diseases, mental disorders, and chronic conditions identified in the previous literature remain statistically insignificant. That is, the models do not identify an increase in the number of new cases per 1,000 citizens in Donbas when the conflict started.

This is also a remarkably stable result. We have tried different specifications and robustness checks: with only the set of the difference-in-difference indicators; with additional explanatory variables measured at the regional (oblast) level; with a total count of new cases instead of per capita numbers; with a total number of cases instead of new cases only. In all these specifications (available upon request), the coefficients for infectious diseases, mental disorders, and chronic conditions remain insignificant.

What are the possible reasons for insignificant results?

These results contradict the previous literature including our own extensive research on the negative effect of the war in Donbas on socio-economic outcomes including the reduced level of happiness (Coupe and Obrizan, 2016a), lower level of political participation (Coupe and Obrizan, 2016b), and lower chance of employment for heads of internally-displaced households two years after resettlement  (Vakhitova and Iavorskyi, 2020). However, it is our duty as scientists to report and discuss results even if they are unexpected.

Data quality is the first potential concern. Medical records may fail to accurately reflect the disease burden because of “ghost patients” who weren’t actually diagnosed with a disease but were added to the records to cover up for personnel absenteeism, theft and so on. However, this data has already been used in other publications (Nizalova and Vyshnya 2010) so data quality is probably not the main issue. We also hope that the quality of medical statistics is likely to improve due to reforms currently taking place in Ukraine (such as the introduction of adequate compensation for medical staff and electronic records). Likewise, part of the medical personnel close to the frontline could become internally displaced which would reduce the accuracy of medical records compared to other parts of Ukraine.

The second reason can be a recent trend in Ukraine and other transition countries to rely more on traditional healers and self-medication (i.e. taking medications without doctor’s consultation), with formal medical care used as a last resort (Rechel and McKee 2009, Obrizan 2019). Internally displaced people (IDPs), who may lack the financial resources for formal medical help, may be more likely to rely on self-medication and avoid inclusion in  medical statistics. Because Donbas has a higher percentage of IDPs than other parts of Ukraine, the impact of the conflict on medical outcomes may be underestimated.

Ukraine has also been characterized by an excessive use of healthcare services under the Semashko system (Obrizan 2019). It may be difficult to obtain a statistically significant increase if the initial usage before the conflict was high. For instance, during the conflict active phase, some patients would make fewer “just in case” visits to the clinic, which would counterbalance an increase in visits that are absolutely necessary due to the war.

It is also possible that the lack of significant effects is driven by the international humanitarian assistance which is not necessarily recorded in medical statistics. For example, Doctors Without Borders/Médecins Sans Frontières (MSF) has supported more than 350 health facilities by 2017 on the both sides of the frontline with donations of medical equipment and medicines to treat the wounded and people with chronic diseases in addition to providing mental health counseling, primary health care and safe deliveries for pregnant women.

Another problem is that population statistics used to compute cases per 1,000 residents may fail to reflect the actual level of internal and external migration (although we do observe the expected changes in population). By the end of 2015 there were 321 thousand refugees to other countries from Ukraine and 1 million 600 thousand internally displaced people in Ukraine. However, the coefficients remain insignificant when we use the total and not per capita number of new cases.

Even though the exact reason for a counterintuitive insignificant effect remains debatable, it is likely to change after the full-scale Russian invasion on February 24th, 2022. The official death toll (significantly underestimating the real number of casualties due to lack of access to occupied territories) of 5,996 killed civilians over 8 months of the full-scale Russian invasion is already almost twice the number of 3,404 civilians killed over the 8 years of the conflict taking place mostly (but not exclusively) in Donbas in 2014-2021. Unfortunately, the negative public health effects of the war are likely to be identified for many more diseases once the data become available for 2022.

Disclaimer. The authors do not work for, consult, own shares in or receive funding from any company or organization that would benefit from this article, and have no relevant affiliations. 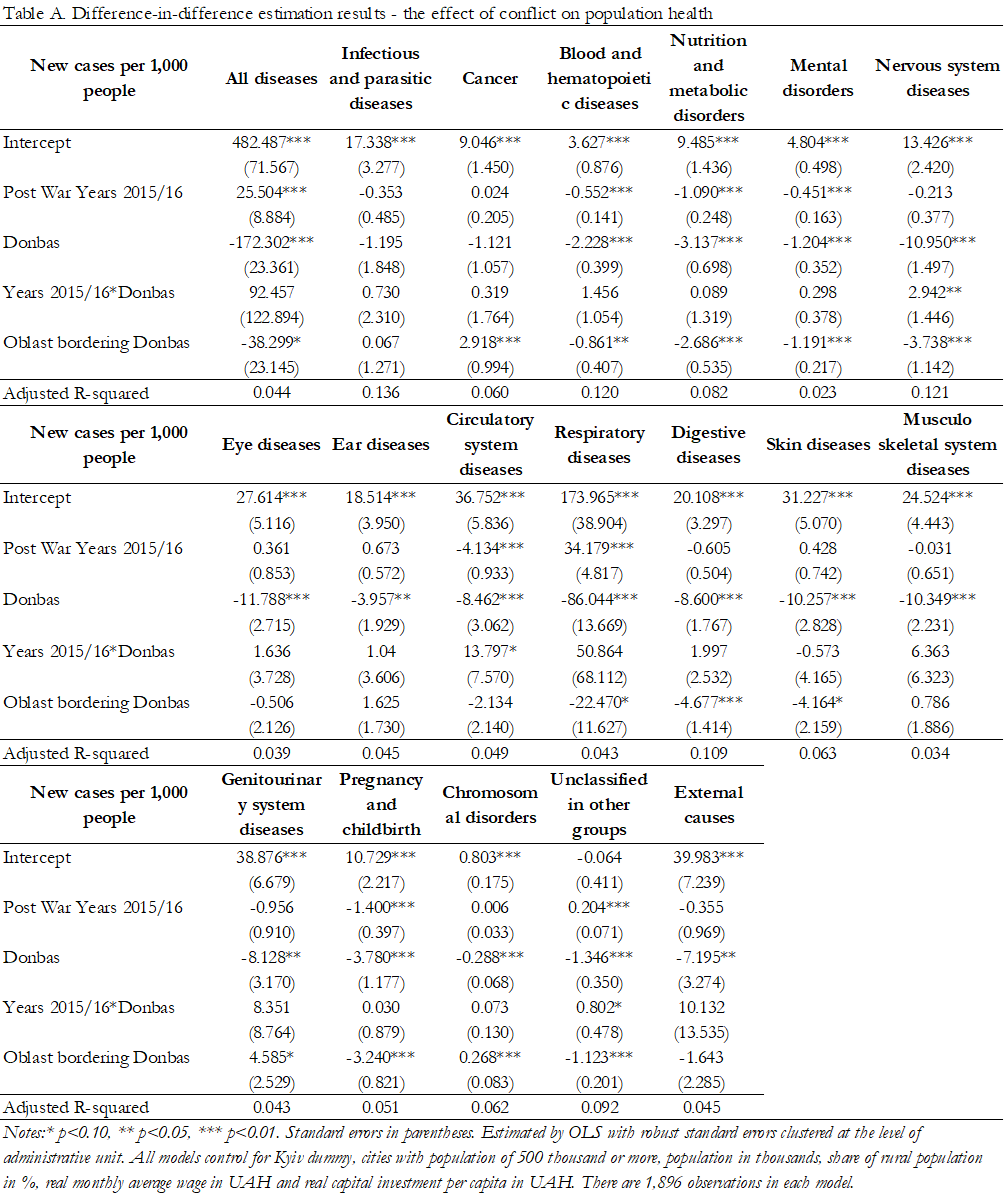