The Covid-19 pandemic is making adjustments to the lives of the countries. To curb the spread of the virus, the countries introduce quarantines, limit border crossings, and prohibit some activities. These measures cause the economic crisis to deepen further. An important question for governments is how to quickly adapt social norms to the new reality? If, after the quarantine is lifted, the virus spreads again rapidly, as was the recent case in China, confidence in the government will be waning and, with the worsening economic crisis, a political crisis may arise.

We are grateful to students of the master’s program in Public Policy and Governance at Kyiv School of Economics Vira Ivanchuk, Serhiy Horovenko, Viktoria Kovach, and Ivan Nikolenko for their help in preparing this article

VoxUkraine looked into the data, models, and approaches scientists use to formulate an evidence-based policy for coping with the coronavirus crisis. We also tried to experiment with one of those models, based on Ukrainian data.

For epidemiologists, this situation is not entirely new. Based on the experience of previous epidemics (Spanish flu, Ebola, SARS, Malaria), scientists have built models that can predict the dynamics of epidemic spread (SIR, SEIR, SEIS, MSEIR, MSEIRS, etc.). The main variable in these models is the so-called basic reproduction number R0, i.e. the number of people that can be infected by one person. This number differs for different types of virus and depends on how often people interact with one another.

When politicians try to stop the spread of an epidemic, it means that they have to take control of this reproduction number R0. R0 < 1 means that the epidemic is declining and R0 > 1, to the contrary, that it is unfolding. There is not yet enough data to accurately estimate the R0 value for COVID-19. According to the WHO publications, it can range anywhere from 2 to 2.5 (it is close to 1.3 for seasonal flu). However, these are only preliminary estimates.

The measures taken by governments to curb a pandemic are effective when R0 is reduced. The strict quarantine measures currently introduced by Ukraine are really helping to significantly reduce the spread of the virus. However, as the simulation models show, after the restrictions are lifted, the virus may start to spread again, which will be the start of a next wave. Therefore, in order to minimize these risks after quarantine, the government must come up with balanced and feasible solutions to control the epidemic.

Theoretical estimates show that the most effective strategy to significantly reduce R0 is to test and isolate people identified as the virus carriers. Therefore, most of the recommendations today focus on the need for tests. However, the questions of how many tests, at what intervals and for how long they should be conducted in a particular country to stop the epidemic, remain unanswered.

To stem the rapid outbreak of the epidemic, at the first stage, most countries have already arrived at the conclusion that strict restrictions are needed. All such restrictions can be divided into 4 groups:

Many countries have closed schools, with many moving to online education. In Bulgaria, schools operate as usual, disinfecting the premises and leaving out children and teachers displaying symptoms of a cold. In Latvia, only schools with reported coronavirus cases are closed. Kindergartens in some countries keep working (in Bulgaria, Iceland, and Estonia – at the discretion of local authorities, and in Finland – if the parents do critical jobs). Also, many non-critical government services are available online only.

Even if such measures prove effective and the rate of the virus’s spread can be slowed down, such situation cannot last for long since quarantine has many dire “side effects”, and not just with regard to the economy. For instance, around 10 countries, including Australia, Austria, China, Japan, Italy, Germany and Lithuania, have set up hotlines to support those who need psychological help as they are already facing increasing numbers of calls.

If scientists do not come up with a vaccine in the near future, the government’s next step should be a policy aimed at helping people live in a world with the coronavirus. Presently, the vaccine is expected to be ready in 12-18 months. This means that governments already need to make efforts to create new rules and incentives that will allow society to constantly monitor the spread of the virus.

What are the alternatives?

Preliminary estimates by Paul Romer indicate that slowing the rate of spread of the virus and keeping it below the threshold (i.e. R0 < 1) can be achieved, e.g. by randomly sampling 7% of the population on a daily basis and isolating the infected persons for 14 days (with the rest of the population working as usual). That is, on average, each person will be tested every two weeks. Such a strategy can be effective even if the tests are not sufficiently accurate and assumed to produce 20% false negative results and 1% false positive results. Such a strategy can be more successful if the persons to be tested are not selected randomly but in the professions with the highest risk of infection, if contacts are traced, etc. However, a large number of tests and incentives to isolate the sick for 14 days are important.

Such a strategy requires considerable investments. However, when comparing these expenditures with the economic losses from quarantine preliminarily estimated by Olivier Blanchard, they may turn out insignificant (e.g. for the United States, testing costs will reach $200 bln, which is less than 1% of GDP, while the stimulus package for the economy due to the crisis currently amounts to $ 2 trln – almost 10% of GDP, and the losses to the economy are estimated at 8-15% of GDP). It is also important that government policies provide incentives to participate in testing.

Currently, testing in most countries is conducted based on some conditions: a person has symptoms of coronavirus, confirmed contacts with the sick, or visited a country with an expanding epidemic. But there are already countries that have started more extensive testing. Iceland offers testing to all citizens, and in South Africa, 10,000 testers visit households for testing. In Turkmenistan, all foreign tourists and government employees are required to undergo testing.

Everyone in the Ukrainian government agrees that testing is necessary. However, the question of the number of tests and ways to carry out the monitoring, so that lifted quarantines do not cause a second wave of the epidemic, remains unanswered. In the first place, due to the lack of reliable data on the spread of the virus.

As of today, the lack of data is currently not Ukraine’s problem only. Most countries do not yet know the number of persons who are/were sick with COVID-19, die of this disease, or were infected displaying no symptoms. There is already data from some countries that have started to implement large-scale testing (Figure 1) and have test results for the virus for 1-2% of the population. Ukraine is only planning to implement this activity. As of mid-April, 0.08% of the population have undergone testing in Ukraine. 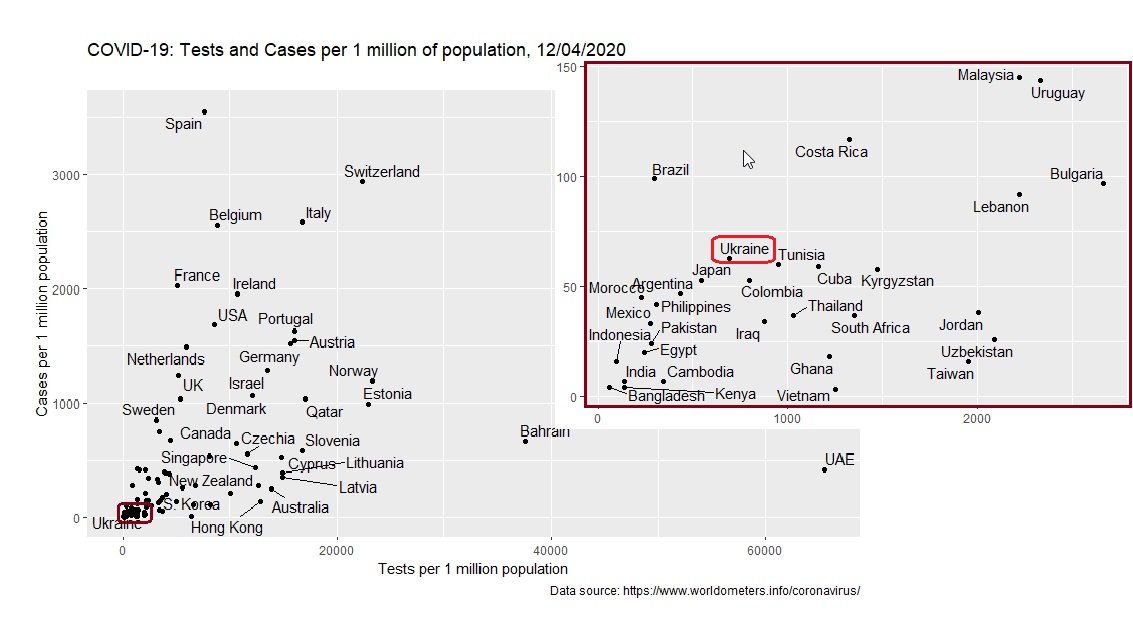 Why is testing necessary?

If reliable, the test results can testify to the effectiveness of government policies in a particular country. Countries are gradually accumulating such data (Figure 2). However, the divergence of the results is significant because, in practice, countries use different testing algorithms. On average, up to 10 infection cases are detected for every 100 tests conducted in Ukraine. This is in line with the average of the countries that have completed at least 5,000 tests and released this data (89 countries). However, many countries’ experience is different. For instance, in France, out of 100 people tested, 47 cases have been detected, in Spain and Brazil  40 and 33, respectively. Such figures are most likely due to the fact that these countries primarily test the persons who are more likely to contract disease. On the other hand, in South Korea, Latvia and Lithuania, only 2 persons out of 100 are found to be infected.

Mortality rates vary significantly. For instance, in Italy, the UK, Belgium, France, the Netherlands and Spain, 10-13% of the persons infected with coronavirus have died. In the case of the countries that have already done 5,000 or more tests, this figure averages 3.5%, in Ukraine 3%. There are many reasons for this variation: different approaches to testing, overloaded health care system, mass events at the beginning of the epidemic, the average age of the population, migration and tourism, etc. 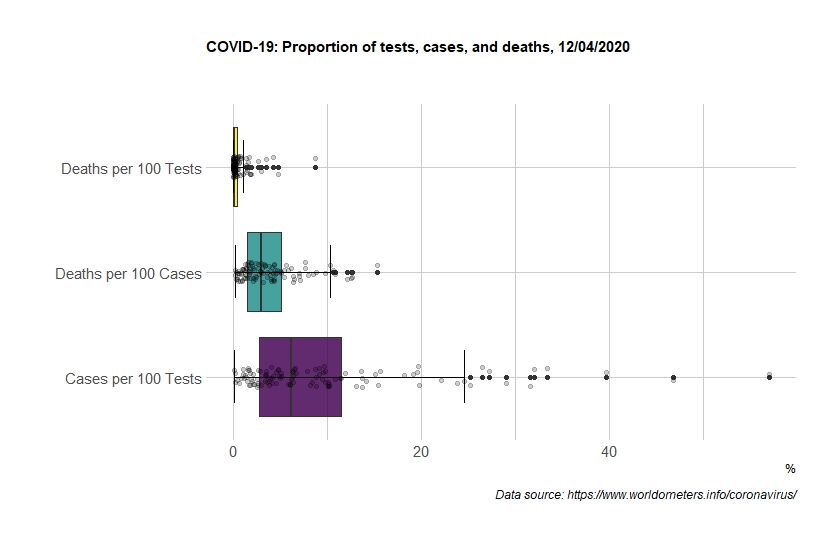 What should Ukraine expect?

Although Ukraine’s data are hard to be considered reliable, we tried to make indicative estimates of the dynamics of the virus’s spread. We assume that the statistics of the tests do indeed reflect the number of coronavirus patients. Currently, this assumption is not realistic since the country actually started testing in early March and a very limited number of tests have been conducted so far. According to the London School of Hygiene and Tropical Medicine, there is considerable uncertainty as to the proportion of infection cases actually covered by official data. Lack of reliable data is not a problem unique to Ukraine. Many countries today know about only a part of cases. Assuming a mortality rate of 1-1.5%, only 10% of the actual cases are likely to have been reported in Ukraine in March. For this reason, we do not recommend using the figures obtained as the only decision-making factor, until the government comes up with quality data collection procedures and testing algorithms.

For calculations, we used the standard SIR model and adapted the R code developed by Antoine Soetewey to analyze the spread of the virus in Belgium, to Ukraine’s data (Figure 3). 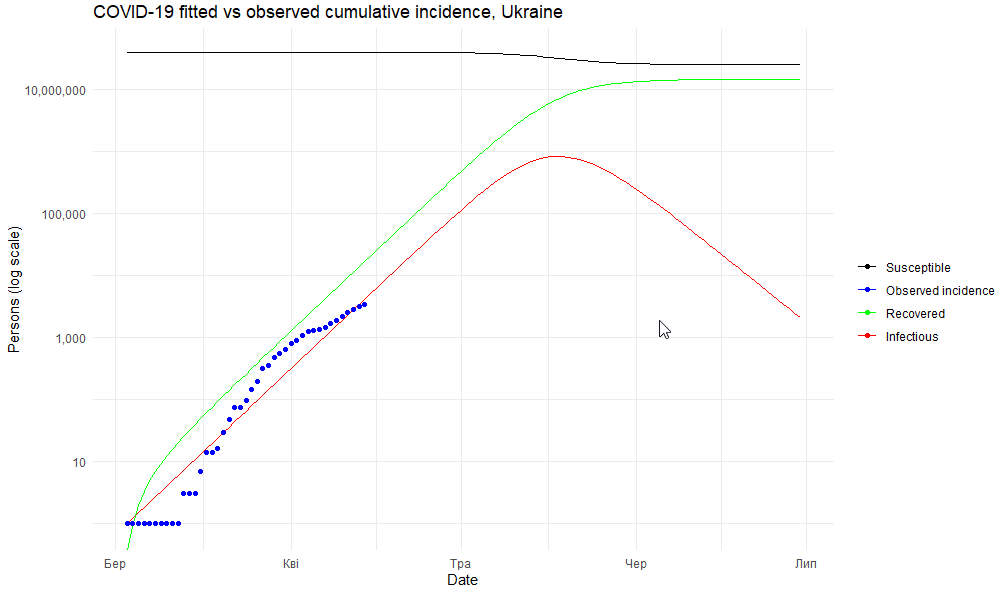 The model shows that, in the first decade of April, the rate of spread of the virus is still not controlled, since 1.24 people are infected by one sick person (R = 1.24). Since the beginning of April, this indicator has decreased (from 1.57 to 1.24). This could be attributed to both the quarantine restrictions and the slowing of the virus’s spread (Figure 4), and to imperfect testing algorithms, when tests do not cover many cases. With a change in testing algorithm and a wider population coverage, these results may increase nominally. 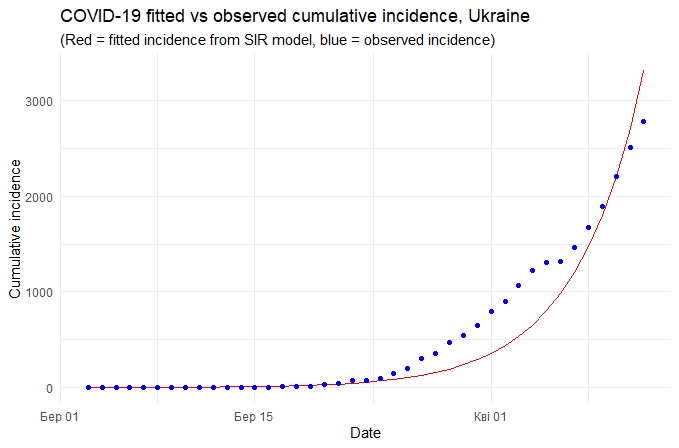 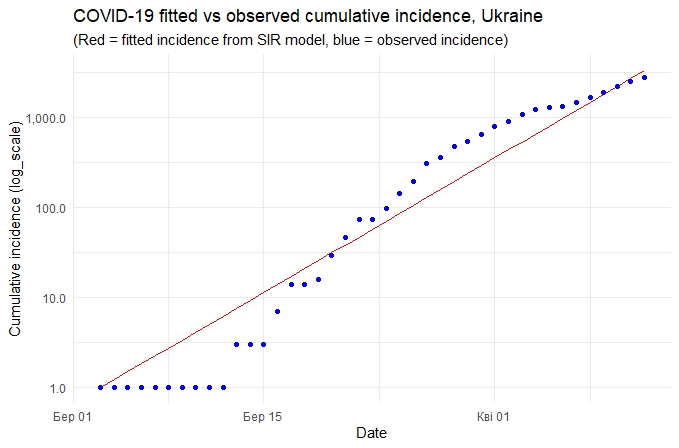 If we trust statistics, the peak of the disease incidence should be expected in mid-May by which time over 2.1% of the country’s population (822 thousand) will be infected, of which 49.3 (6% of the infected persons) will need intensive care.

The government has announced plans to increase testing and change the testing algorithm. While, previously, those tested were the persons displaying coronavirus symptoms after returning from abroad or having contact with such travelers, the new algorithm will ensure additional testing for all patients with pneumonia and those who died of it.

Presently, Ukraine can conduct 30 thousand tests per week, and in the future, it will be able to do 80 thousand. This is about 0.4% of the population every 2 weeks. But in practice, Ukrainian laboratories currently do only 2.5 to 3 thousand tests per day. Chief State Sanitary Doctor of Ukraine Viktor Liashko notes that here they test “everyone who needs to be tested” and that this amount of testing is not due to a lack of materials, but to a small number of suspicions for COVID-19. The question remains whether such a strategy will prove viable and whether it will curb the spread of the epidemic (keeping R0 < 1) after quarantine.

To assess whether a COVID-19 containment strategy is the right solution to the problem, and adjust it properly, we need to collect quality data and do extensive testing. Specifically, the following persons should be tested:

It is also advisable to select small pilot areas for sample testing to estimate the number of the infected persons that do not display symptoms. 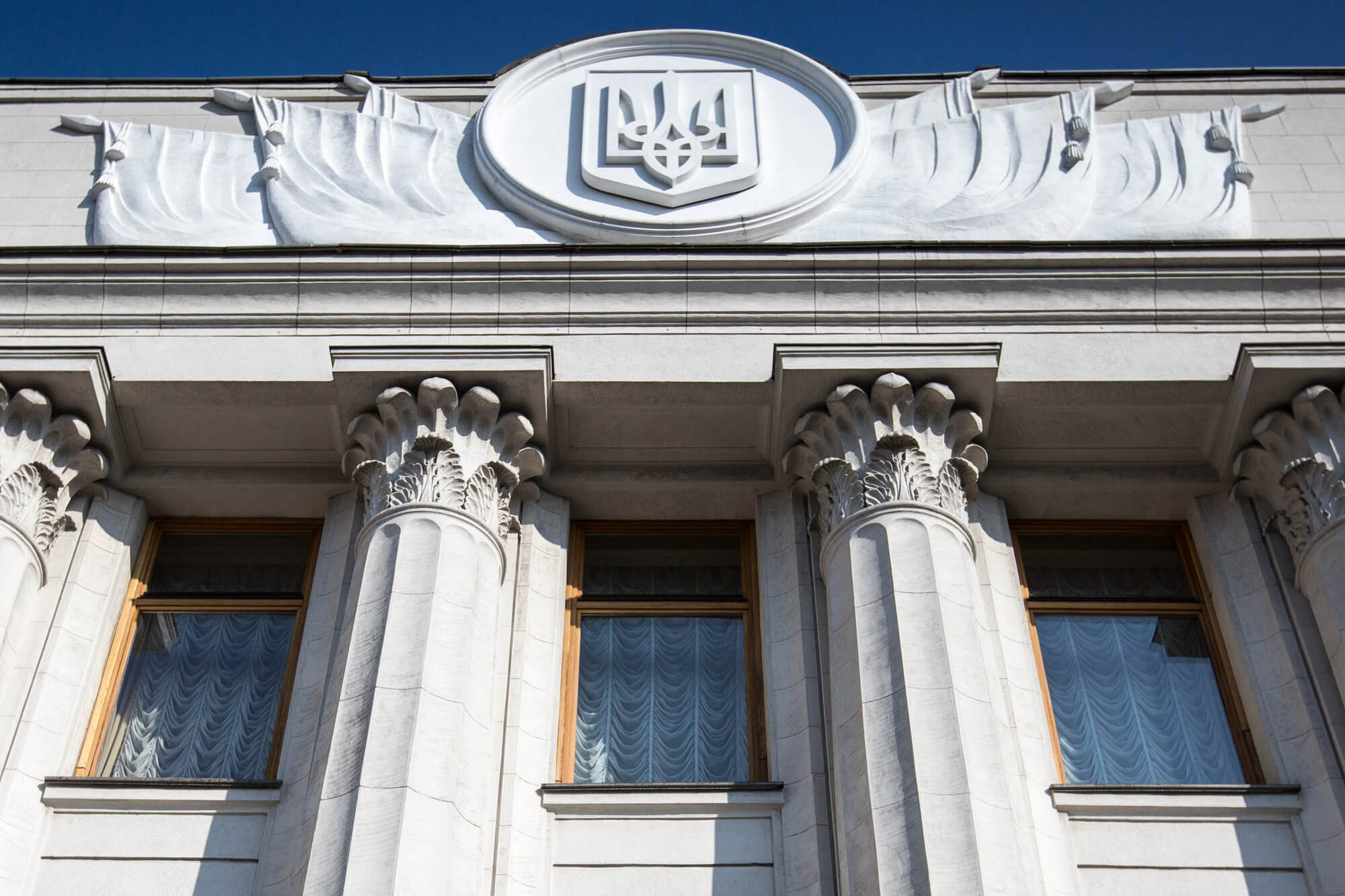 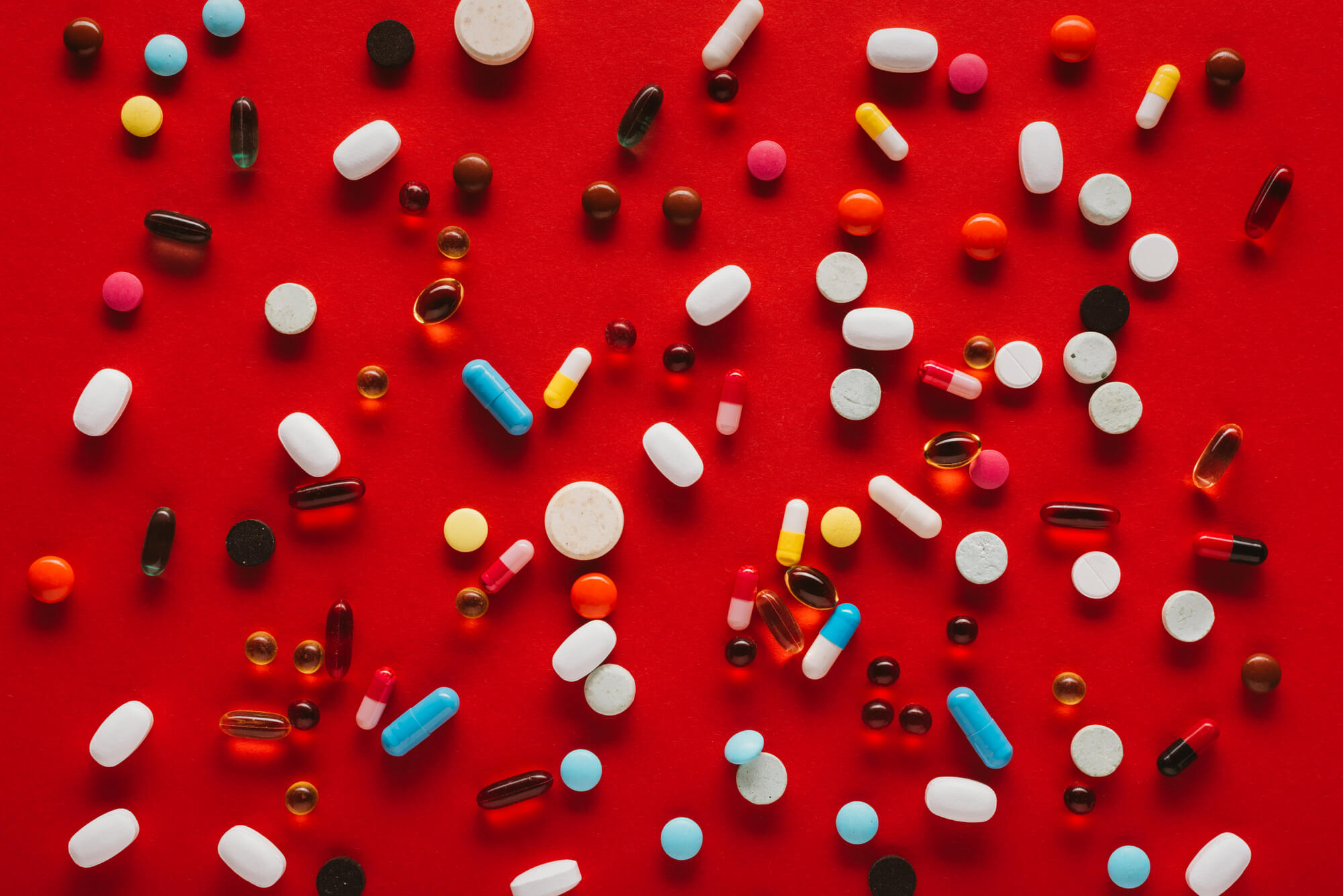