Two true statements out of 58 verified are the result of the main liar and the manipulator of this rating.

16 politicians were included in the rating. This list includes the head of state and parliamentarians of the new convocation. Volodymyr Zelensky was first time included to this VoxCheck rating. After all, in 2018, the active phase of his election campaign has not yet started, and accordingly, most of his statements appeared only in early 2019.

But some of the figures in this year’s rating – Poroshenko, Tymoshenko, Boyko and Rabinovych – were present in a similar tally  last year.

So what new party speakers appeared on Ukrainian TV shows in 2019? How truthfull were they? Did experienced politicians tell more truth when they were in opposition?

To analyze politicians’ words, VoxCheck analysts listened, transcribed, and checked about 20 hours of speeches each week. Each of  the show selected for check- out aired in prime-time on different days. According to our observations, representatives of the pro-government forces most often cme to  the “1+1 “and ICTV, and the opposition – to the “NewsOne” and to the “Channel 112”

For this rating, VoxCheck monitored Ukrainian politicians from August 29th – from the first day of the new convocation of the parliament – until the end of 2019. Thus, quotes of new politicians who have not yet had much to say will not be “lost” among the statements of their predecessors in the second half of the year. Check-outs for earlier statements for 2019 are available on the Vox website in “article” format or on the Anthology of Lies  portal. The methodology for selecting politicians’ citations for rating, review, and calculation  you can find at the end of this article.

“Rating of manipulators and liars. Reboot”  is a joint project of VoxCheck and and “Fakty” (Facts)  on ICTV.

The Biggest Liars and Truth Tellers 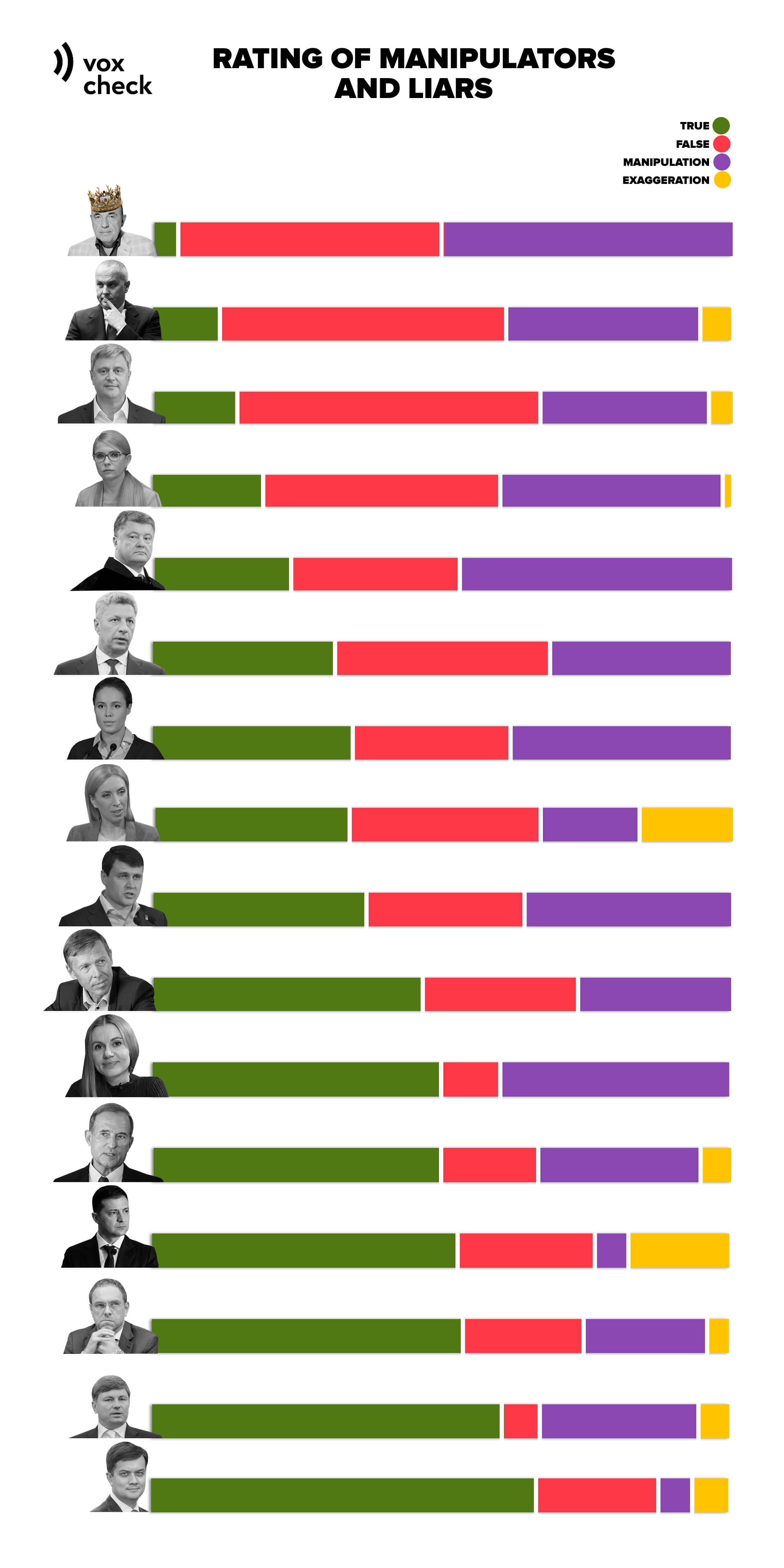 Without further ado, Vadim Rabinovych (3.45% of the truth), Nestor Shufrych (11.11% of the truth) and Olexandr Kachnyi (14.29% of the truth) became the biggest liars and manipulators of this rating. All three are representatives of the political party “Opposition Platform – For Life.”

But the “trio” of  biggest truth-tellers was more diverse. Dmitry Razumkov (64.71% of the truth) is the Chairman of The Verkhovna Rada of Ukraine and number 1 in the lists of “Servants of the People”. Almost in step with him goes Arthur Gerasimov (61.10% of the truth) – Co-chair of the parliamentary faction of the European Solidarity Party. Completes the top three Serhiy Vlasenko (53.6% of the truth) – a member of the All-Ukrainian Association “Batkivshchyna”.

It is noteworthy that two of the three truth-telling leaders – Serhiy Vlasenko and Artur Gerasimov – are members of the factions of the parties of Yulia Tymoshenko and Petro Poroshenko, who are much higher in the ranking of manipulators. But Anna Skorokhod said the least factual quotes during the check. And although she is 6th  place among the truth-telling politicians, she is in the top three among the manipulators.

Most talkative participants of the rating

16 politicians were included into the Rating. In addition to President Zelensky, his political force was represented in the list by two politicians, and another “servant of the people” was expelled from the faction by the end of our monitoring. “European Solidarity” together with the previous President Poroshenko is represented in the rating by only one MP. We also analyzed 4 Batkivshchyna representatives and 6 MPs from the Opposition Platform – For Life. The “Opposition Platform” in our rating has the largest number of parliamentarians, since this political force had the largest number of speakers on political talk shows. In other political forces, fewer people commented on the country’s current problems.

The most “talkative” were Yulia Tymoshenko, Yuriy Boyko and Vadim Rabinovych. They often use facts, but at the same time they are most often lying and manipulating. And, for example, Iryna Vereshchuk, Serhii Sobolev and Anna Skorokhod are not so often operating with facts and voicing their own estimates or forecasts, which VoxCheck does not check.

Most often, politicians manipulated and lied  while speaking in a negative context. That is why representatives of the opposition forces: OPHZ (Opposition platform – For Life) and leader of the Batkivschyna – Yulia Tymoshenko, were in the first positions of the rating. Their rhetoric is full of criticism of the actions of the authorities. This is probably why they most often manipulated.  The speakers told the truth most often to illustrate events positive for them. For example, Viktor Medvedchuk’s truth was about the better condition of the Ukrainian coal industry before the war with Russia. Yulia Tymoshenko truth was about the Ukrainian economy since its premiership or mistakes of the current government.

Most lies and manipulations concerned the opening of the land market. In particular, when comparing agricultural land prices in Ukraine and Europe or talking about restrictions on the concentration of land in “one hand”  (one owner) in the bill on agricultural land and other countries.

Energy was another top manipulative topic, in particular, gas and electricity prices for the population, gas transit and privatization of Ukraine’s gas transmission system (GTS), and “green” energy.

Many manipulations and misconceptions accompanied the budget adoption. Thesis that the financing of security forces is excessive, and financing of social needs is insufficient was often repeated. Alongside with it came thesis, that the funds planned to pay off debt are too large, although we cannot refuse to pay off debt.

Less frequently were discussed topics on legislative initiatives of the new parliament, gas contracts with the Russian Federation, tariffs for housing and communal services and new subsidy rules, Minsk agreements and the Steinmeier formula, privatization of state-owned enterprises.

Both Volodymyr Zelensky and Petro Poroshenko were “short in words”. During the whole monitoring period we have selected 17 factual statements of each of them. For comparison, in the most “talkative” rating participant – Yulia Tymoshenko – 82 statements.

In the first VoxCheck ratings Petro Poroshenko was the first in truthfulness. And this is not surprising. At the time, the President’s strategy was extremely simple and effective – concentrating on the positive. He loved to stake on achievements, emphasized growth and development, and ignored negatives. As the election approached, his tactics changed, more populism appeared in his words, and as a result more exaggeration and manipulation appeared.

A similar tactic is now being used by President Zelensky. Most often, he is telling the truth when it comes to gains: agreements during meetings, exchanges of prisoners, ratings and draft bills. But when it comes to more complex topics – energy market prices, relations with the IMF, or war – the president often lies. However, he almost never manipulates – only 5.9% of his statements were manipulative. But when it comes to data – Zelensky often says falsehood. We assume that he either does not know some of the indicators or intentionally recites the wrong data.

All checked and proven quotes can be read in the Anthology of Lies   – the online VoxCheck tool with all the project audits.

The most iconic speeches of politicians were also taken into consideration, such as Volodymyr Zelensky’s press marathon, Vadim Rabinovych’s telethon, the first session of the new convocation of the  parliament, YES-2019 conference, etc.

Rating. To rank manipulators and liars, we selected those politicians whose speeches were able to produce at least 10 factual quotations during the specified period.