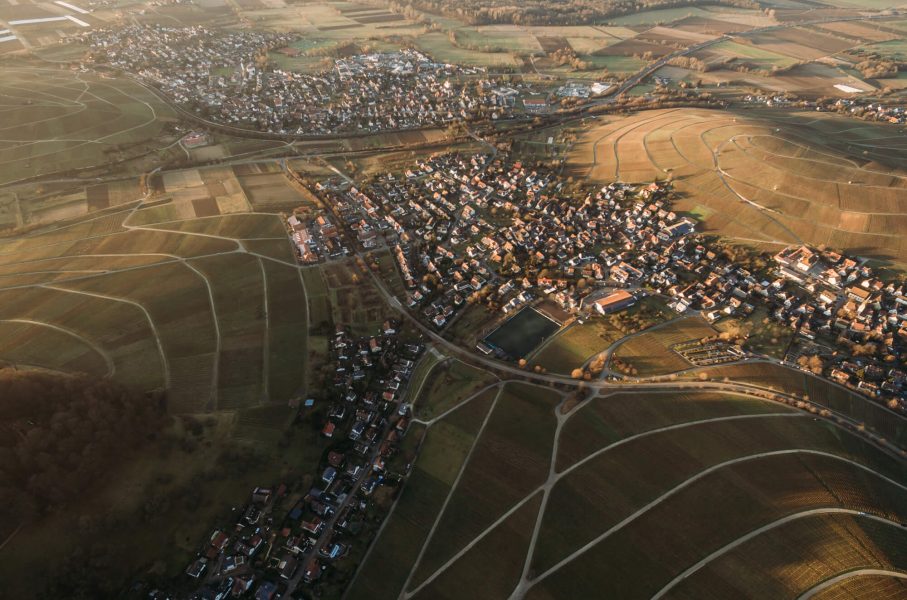 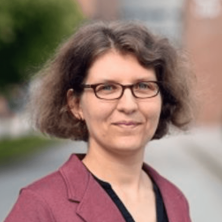 Anne Pintsch
Associate Professor at the Department of Political Science and Management, University of Agder, Norway 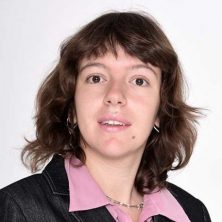 Maryna Rabinovych
Assistant Professor at the Department of Public Policy and Governance, Kyiv School of Economics

Such cooperation could benefit ATCs in many respects: they could gain valuable knowledge about local governance or local economic and infrastructure development; get to know concrete examples of reforms in other countries; profit from others’ experience with application for and the management of third-party grants; build up a network of potential partners for large-scale joint projects; increase their international visibility for potential investors and tourists; activate their population to take part in personal exchanges abroad or at home and, in sum, provide better living conditions for their inhabitants.

In fact, however, their contacts with communities abroad and participation in international municipal networks remain limited. What are the challenges and what can be done to boost ATCs’ international cooperation?

The decentralization is broadly referred to as an example of a successful post-Euromaidan reform. In theory, the decentralization reform shall contribute to the ATCs’ international and European cooperation for at least six reasons.

Most generally, the reform broadens the sphere of ATCs’ competences and financial means available to them (e.g. infrastructure subventions and subventions for socio-economic development). This implies the rise in both the ATCs’ independence and capacity necessary to initiate and engage in international cooperation beyond single, short-term assistance projects.

Secondly, the decentralization is to a great extent a response to socio-economic challenges, such as the lack of resources and poor quality of administrative services and infrastructure. Hence, successful decentralization shall promote economic development and subsequently make regional development cooperation with Ukrainian ATCs more attractive to foreign partners.

Thirdly, the nexuses between the decentralization reform and several other crucial reform domains, such as public administration, public finance management and countering corruption shall attract foreign partners to cooperate with Ukrainian ATCs.

Fourthly, zooming in on the decentralization’s effects on the ATCs’ European cooperation, the German political scientist Andreas Umland argues that successful decentralization brings Ukraine’s internal state organization closer to existing forms of decentralization in Europe. In particular, Umland refers to the principle of subsidiarity embedded in Art. 5(3) of the Treaty on European Union that provides for decision-making at the level that is as close as possible to the citizens. Hence, the more Ukraine adheres to the subsidiarity principle and the more deconcentrated decision-making power becomes, the more similar it becomes to European countries, Such perceived proximity makes it easier for European partners to understand local management of ATCs and engage in cooperation with them.

Last but not least, encouraged to attract third-party funds by the government and the pro-reform civil society, the ATCs should be interested in international cooperation due to the opportunities of exchanging knowledge regarding grant writing and getting engaged in ambitious, externally funded cross-border projects.

Despite these theoretical premises, the empirical study conducted by Anne Pintsch in 2019 reveals that the ATCs’ international cooperation, including the cooperation with communities in the EU, remains underdeveloped.

The study launched in spring 2019 involved the 159 ATCs created in 2015 across all the oblasts, of which 66 responded (see table A in the Annex). The survey was sent to the e-mail addresses given on the ATC’s websites. It was addressed to the heads of the respective ATCs (“golova gromady”), indicated on their websites. The e-mail contained two versions of the questionnaire. First, as a word documents in both Ukrainian and Russian. These could either be downloaded, filled in and returned by e-mail or printed, filled in, scanned and returned as an e-mail attachment. The second option was to follow a link to the online version of the survey set up under Unipark. Users could choose between a Ukrainian and a Russian version at the start of the survey. The logic behind the choice of particularly these ATCs was determined by two factors:

The study had two focus areas:

As shown in the Figure 1 below, a large majority of the ATCs that responded consider international cooperation ‘very important’. 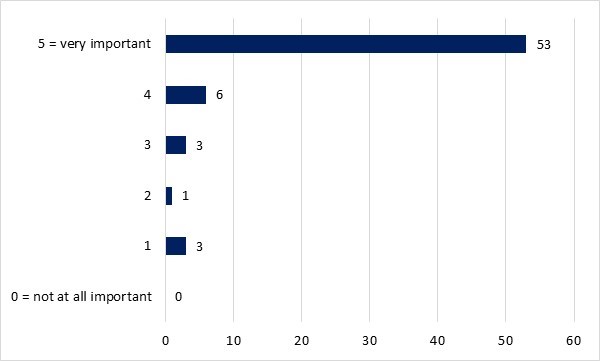 Note: chart presents the opinion of ATCs that replied. Explanations about a potential selection bias can be found in the Annex

51 out of 66 ATCs acknowledged having had the experience of participating in international programmes, such as the “U-LEAD with Europe” programme.

The communities that non-anonymously reported formal partnerships have an average population of ca. 15,000. The smallest ATC has ca. 4,000 inhabitants and the largest one over 30,000. The average size of communities that non-anonymously reported informal partnerships is ca. 14,000. Ca. 2,000 people live in the smallest and ca. 30,000 people live in the largest ATC with reported informal twinnings.

Of the 17 ATCs that have reported at least one formal twinning relationship, 15 have also reported experience with international programmes, one has not and one did not reply to the question. A similar picture emerges for the 13 ATCs that reported informal twinnings (and which partially overlap with the communities that have formal twinnings). Overall, 34 formalized and 17 informal partnerships were reported. Ukrainian ATCs have most developed Twinning relations with communities in Poland (30 reported formal and informal partnerships). Other partners include Belarus (3), Romania (3), Georgia (2), Slovakia (2), Hungary (2), Czech Republic (2), Moldova (1), Bulgaria (1), Estonia (1), Latvia (1), Germany (1) and Slovenia (1). Apart from Germany, no partnerships with communities in Western Europe were reported. One reply was missing.

The situation with the ATCs’ participation in transnational networks is close to the one with partnerships. As of 2019, 108 Ukrainian ATCs (including at least ten ATCs founded in 2015) were represented in the transnational Mayors for Economics Growth (M4EG) Initiative launched by the EU in 2016. By now, this figure has risen to 163 participating ATCs.

In turn, 270 ATCs, including 38 communities created in 2015, participated in the EU-supported “Global Covenant of Mayors for Climate and Energy”. Interestingly, several ATCs that were officially members of those networks did not state this in their returned questionnaires, which may point to a low relevance of these ties in practice.

Given the relatively low rates of partnerships and the ATCs’ participation in transnational networks, only 10 ATCs reported having designated separate specialists to deal with international relations.

Asked about particular obstacles to international cooperation, particularly the lack of qualified specialists was distinguished by respondents as a top challenge preventing them from engaging in more active international cooperation. Other reported problems include insufficient capacity, the lack of experience, difficulties with finding partners abroad and the lack of foreign language competencies. Some respondents pointed to the pressure of other pertinent issues and the challenge that the reform is still incomplete.

In this vein, the following actions can be taken to give an impetus to the ATCs’ international cooperation.

I have checked for potential non-response bias in two ways:

The first is to look for potential correlation between the number of days that it took the ATCs to reply and the perception of international cooperation. The idea is to find out whether there is a relationship within the group of respondents (e.g. people who do not see international cooperation as important reply late to the survey, possibly only after reminders, whereas people who name international cooperation as important reply quickly), which could be extrapolated to the non-respondents. Even though this procedure has some problems, it is an option suggested by the methodological literature, e.g.Achim Koch and Michael Blohm. 2015. “Nonresponse Bias“. Mannheim, GESIS Leibniz-Institut für Sozialwissenschaften (GESIS Survey Guidelines). DOI: 10.15465/gesis-sg_004.

I have calculated Spearman’s ρ (Spearman’s rank correlation coefficient) for the 45 non-anonymous ATCs that used the online survey. It is 0.09, i.e., there is only a very weak relationship. Even though it is strictly speaking not allowed due to the structure of the data (ordinal for one variable), I have also calculated Pearson’s r and it is -0.3, i.e. again only a weak correlation (the negative sign comes from the fact that Pearson uses the “raw data” instead of ranks. While in Spearman a low value indicated a high rank in terms of importance attached to international cooperation, in Pearson a low value indicated less importance).

As a second check I have compared the ATCs that participated in the pilot phase of U-LEAD. 20 ATCs founded in 2015 and thus included in the survey participated in this programme. Participation in U-LEAD was voluntary and ATCs were chosen through an application procedure. Thus, one can assume that these ATCs value international cooperation. Of these 20 ATCs, only eight replied in a non-anonymous way. Even though some more could have replied without stating their names, there does not seem to be a strong relationship between perception of international cooperation and response to the survey.

In summary, while we cannot be sure that the figure 1 would look the same if more/all ATCs had replied, there is no strong reason to believe it would be completely different.

Table A. The distribution of communities that were surveyed and that replied by oblast