The Crimea in 2016: Are Ukrainians Returning to the Russian-Occupied Beaches? | VoxUkraine

The Crimea in 2016: Are Ukrainians Returning to the Russian-Occupied Beaches?

VoxUkraine analyzed the dynamics of passenger traffic to Crimea and looked at the relative percentages of Russian and Ukrainian visitors. We also discovered the manipulation of some data by “the Crimean authorities”.

At the beginning of October, Russian scientists made an announcement that surprised the whole world. Aleksandr Ipatov, the Director of the Institute of Applied Astronomy at the Russian Academy of Sciences, stated that the Crimea Peninsula “is moving towards Russia”. However, it is moving at the rate of slightly more than 1 cm a year. It will take about 1 million years for Crimea to “arrive” at the Russian coast.

VoxUkraine has decided to analyze more dynamic and important processes.  In particular, we aimed to find out whether the amount of visitors to the annexed peninsula has changed.
The data analysis helps answer the following questions. Are those Ukrainians who left Crimea after the annexation going back? Is the number of Ukrainian tourists to Crimea growing? How is Russia solving logistical problems? What is the real number of Russian tourists in Crimea?

Currently, Crimea can be reached by plane, by ferry, or by car (from continental Ukraine). Every day, over 100 flights operate in both directions between Russia and Crimea. According to the Russian statistics, 4.5 mln persons flew either to or from Crimea in January-September 2016.  Assuming each person flew round trip, that gives a number of 2.25 mln visitors. This represents an increase of 24% compared to the same period in 2015.

The data on maritime and land routes are more intriguing.  We focus on them below.

12 ferries operate between Russia and the Crimea, using 2 routes, “Caucasus – Crimea” and “Caucasus – Kerch Sea Trade Port”. The latter is used for cargo transportation. We have used the data of the Kerch ferry crossing and State Border Guard Service of Ukraine to find out where the visitors to the peninsula come from and whether the internally displaced persons are coming back. The data can be downloaded from data.voxukraine.org. 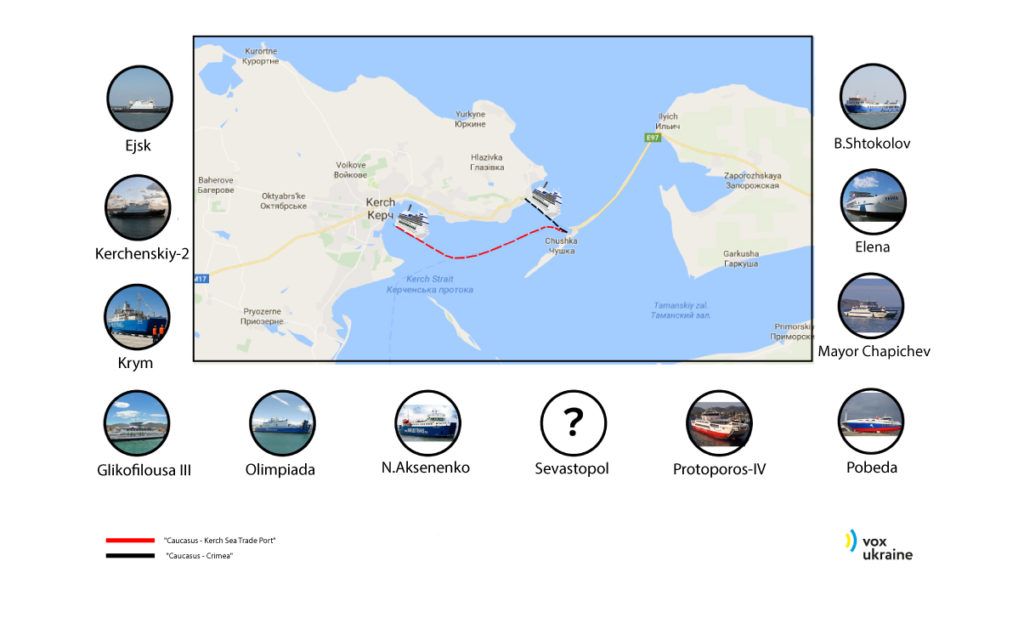 The number of passengers on the Russia-Crimea route has remained quite stable (if no summer months are taken into account). According to the Kerch ferry crossing, almost 15,000 people use it daily in both directions. A large increase (350%) occurred in the summer of 2016. The growing popularity of the peninsula can be explained by several factors. First, the Russian government cancelled flights to Egypt and Turkey, popular resort areas (the flight connection with Turkey was restored again in August 2016). Second, authorities tried to make the Crimea more attractive as a tourist destination. 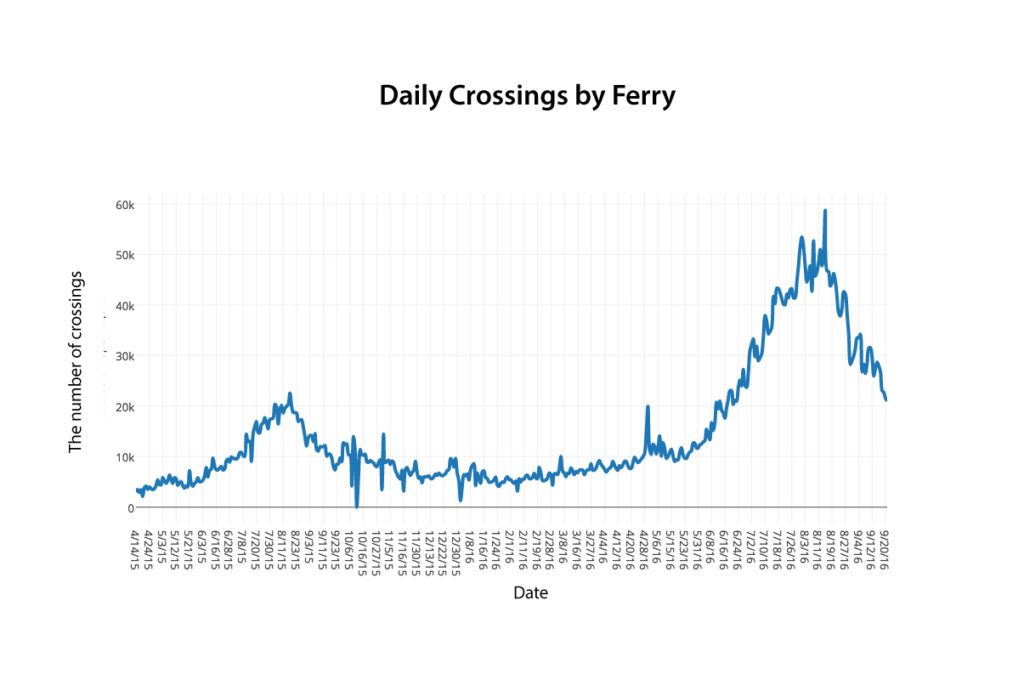 “The dead souls” of the ferry crossing

According to the Kerch ferry crossing, the number of passengers in 2016 was several times larger than in 2015.

However, such a large increase calls for a more thorough analysis, as there are some doubts as to whether the data are correct.  “Morskaya Dyrektsyja” (the crossing operator) reported the highest number of passengers in July and August 2016. At the time, there were 5 passenger ferries (“Olimpiada”, “Hlikofilousa III”, “Protoporos-IV”, “Mayor Chapychev”, “Elena”), and 2 cargo ferries (“Borys Shtopolov” and “Eisk”) in operation. Depending on the number of ferries in operation, about 39,840-44,040 passengers can use the crossing in a day. According to the “Morskaya Dyrektsyja”, 2.5 mln people used the crossing in two months. However, it appears that the official number of passengers is higher (by 6.5%) than the number of passengers the ferries could transport when operating at the full capacity. This means that 163,000 passengers were only able to use the crossing if the ferries were overloaded. The difference between the official and the maximum number of passengers can either imply the manipulation of data or a mistake in calculations. Moreover, one direction is usually more popular at any given moment of time. At the beginning of the season, more passengers travel to the Crimea, while at the end of the season more people return to Russia. The actual difference between the real and official data is thus probably much larger.

How many Ukrainians went to the Crimea in the summer?

In autumn and spring, less people come to the Crimea, both by ferries and through the administrative border. The highest number of visitors that come through the checkpoints in the Kherson Oblast is usually reported in July, which can be explained by the inflow of tourists. 221,000 visitors crossed the administrative border in July 2015, while this number fell to only 198,000 in 2016.

In January-September 2015, the net outflow of people from the peninsula amounted to 23,000.  However, in January-September 2016, the number of incoming visitors was higher than the number of those who were leaving by 43,000. This means that either some of the tourists have not returned home at the moment of collecting data or some of those who left the Crimea earlier have come back home. According to the reply of the Ministry of Social Policy to the inquiry by VoxUkraine, as of October 20, 2016, 29,500 people that left the Crimea for the continental Ukraine were registered as internally displaced persons. 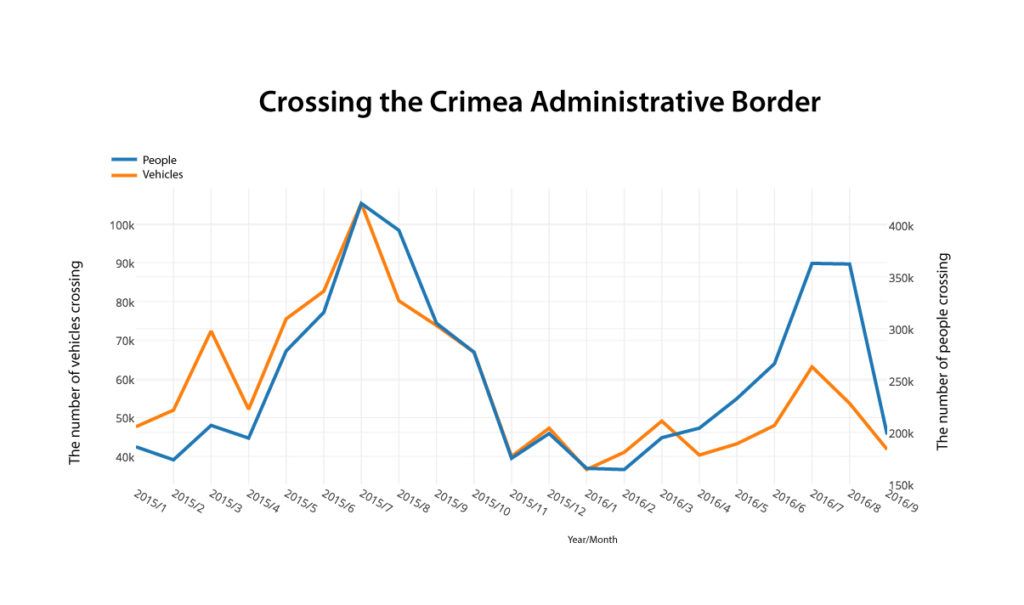